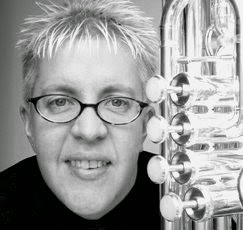 A graduate of the Victorian College of the Arts, Carolyn held the position of Principal Tuba with the Australian Opera and Ballet Orchestra (Opera Australia) from 1987 to 2006. In 2006 she took leave from the opera (subsequently resigning) to train as a piano tuner and technician, and to pursue other performance avenues.

Carolyn's predominant musical activities have always had an improvised and spontaneous focus. Performances with Bob Brozman, Sandy Evans, Paul Grabowsky, Jackie Orszaczky and Paul Cutlan, along with involvement with World Music, street bands, and jazz composition, have helped Carolyn craft her own distinctive voice as a jazz performer.

Carolyn has recorded numerous Australian commercial, film and television soundtracks, and is a mainstay in the irrepressible Mic Conway's National Junk Band, on sousaphone, electric bass, jug and swanee whistle. This band, with its “New Vaudeville With Attitude” blend of comedy, circus and satire is a regular on the Australian folk and blues festival circuit.

Musical from an early age (harmonizing with her mother from the womb), Cazzbo took a long time to get around to harnessing this latent talent formally. At 16 she agreed to try the tuba in the school brass band - for a joke - and she’s still laughing!

Whilst obtaining a Degree in Musical Stiff-Upper-Lippery at the Victorian College of the Arts, the Melbourne jazz scene offered opportunities to express her natural inclination for improvisation.

At age 21 Cazzbo moved to Sydney to take up her new appointment as Principal Tuba in the Australian Opera and Ballet Orchestra (Opera Australia).

Sandy Evans, Bob Brozman, Dame Joan Sutherland and Luciano Pavarotti are just a few of the esteemed performers who have adjusted their curriculum vitaes to include: “I’ve played with Cazzbo”.

Inspired by hearing The Hoosier Hotshots (on a cassette in Mic’s van on tour) she promptly took up the swanee whistle.

Cazzbo’s hobbies include cycling, recycling, staying up past her bedtime, and protecting the Old Growth Weeds in her garden.

“Despite her classical training, Cazzbo is a brilliant improviser with a great ear.”


“The Paul McCartney of the jug.”
- Mic Conway
Posted by CAZZBO