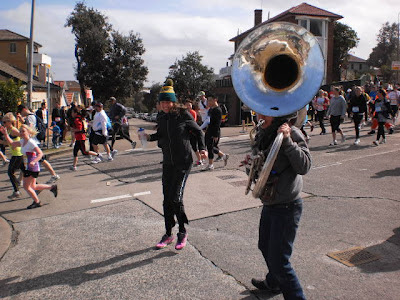 Gale-force winds meant that I was nearly the sousaphone version of Mary Poppins, or The Flying Nun! Whew!

A brief sunny moment and a shared street-dance - me swirling around this fabulous soul in the green and gold beanie. She's the woman who came sixth in the City to Surf, who then back-tracked to our band spot, towards the end of the route, to bust out excellent energetic dance moves and to egg on the less-elite runners and walkers.

What a day! I also had the privilege of taste-testing some very fine champagne and whisky, courtesy of the regular punter-crew who bring a motherlode of infrastructure to set up and share in adding to the atmosphere.

Costumes I saw and liked: Gorillas seem to be a given (a gibbon) but one was very early in the piece, with the semi-elite runners... impressively striding. This had the potential to challenge all that we know of evolution! Sumos, sharks, superheroes, smurfs. I particularly liked 'Where's Wally (and Wife)'* "THERE he is!" I called out, "THERE they are!" Sometimes I like to play whatever theme is appropriate for the costumed, but I did much less of that this year, battling aforementioned gale-force blusters, coupled with having my work cut out dragging a leaden-to-the-point-of-comatose rhythm section (no names, no pack-drill)... Aaargh! But I digress. More cozzies:  sugar-gliders, how mar-vellously-supial!

"Unlike their counterparts in London, winner Adams and co didn't have the luxury of clearing weather, with Sydney's torrential rain and gail-force (sic) winds continuing to make it arguably the worst racing conditions in City to Surf history." Sydney Morning Herald

Meanwhile The Sun-Herald gives more air-time to the costumes. I love the costumes and any fun.