Today’s piano tuning call was to the most incredible house I’ve ever encountered. It makes every Grand Design episode I’ve seen seem pedestrian. Now I feel like I’m living in a shoe box*. It’s a perk of the job of piano tuner to witness folks’ lovely houses, endless entertainment and interest. I regularly coo over houses and gardens (and not just when it’s difficult to coo over the pianos therein).

The lady who guided me to the piano, was she the owner? Family? No, she’s the full-time House Manager, leading a team of staff further augmented to prepare for the party. I learned that the house was a gob-smacking twenty-thousand square metres in area, and that its renovation/rebuild had cost forty-seven MILLION smackeroos. Stultifying!

The piano was equally impressive. When one hears ‘vintage’ it often means ‘borderline un-tuneable dilapidated rust-bucket’. Even when the word ‘Steinway’ follows... Vintage Steinway. Unfortunately, there is every chance that it is a neglected, mouldering, borderline un-tuneable dilapidated STEINWAY rust-bucket. One look and quick listen had me smiling (as Kevin McCloud would, if he were doing a piece to camera about the hand-selected curved woods that made up the walls of the astonishing space in which the Steinway stood). 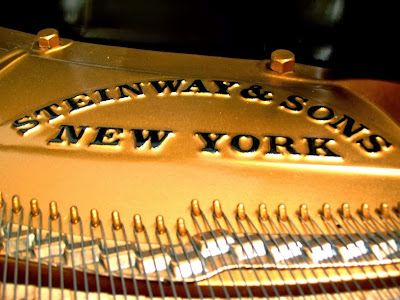 A beautifully-restored New York Steinway ‘O’. Everything I could see (action, wood parts, hammers, felts, strings, pins) all new. The cast iron plate and cabinet were beautifully refinished. Observe the ornate decal on the soundboard. Look at all that name-dropping, clang! 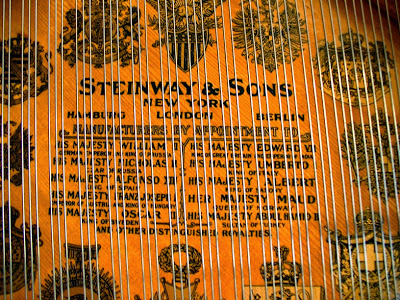 ‘…and other distinguished royalties’. I’m now adjusting my business cards to state that I’m the tuner for the ladies of the harem of the Court of King Caractacus.

What a pleasure! I mercifully finished the tuning just as a team of DANCERS turned up and started too-noisily rehearsing their choreography.

My way into the house felt like entering a venue or Arts Centre, a labyrinthine route through commercial-style kitchens and laundries. My journey out saw the House Manager kindly invite me to peek at a few more of the house’s treasures, spaces and views. Salvador Dalí sculptures, secret doors and plunge pools aplenty. Staff quarters and boat sheds were mentioned (although not viewed). 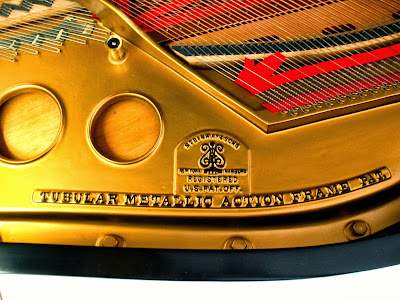 'Tubular metallic action' eh? Something with which I can claim more than a cursory acquaintance... 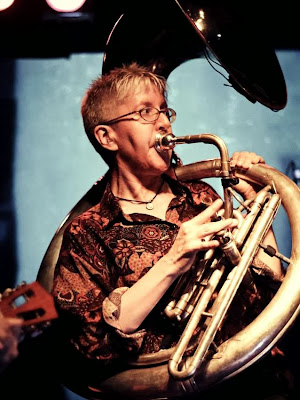 
I tuned a new Kawai grand this week and resolved a damper problem, which was very gratifying. Venue hire piano tuning jobs flow in apace - sometimes I meet the same piano several times, in as many days, in as many different performance spaces.

But what of 'rust-buckets'? By way of further illustrating what you ideally do not want to see 'under the hood'...

Here's a piano I met deputising for a busy tuner colleague.  I photographed this particularly 'purple patch' before discussing risks and strategies with the client (and before moving anything). This area was particularly bad, some sort of spillage had occurred (probably a long time ago) contaminating the strings, the bearing points over which the strings travel, the tuning pins and the pinblock (wrest plank) into which the pins are driven. No manner of technical caution can guarantee that there isn't significant risk of breakages with such compromised strings and bearing points. Such imperfect rough, rusty surfaces. I lubricate** all bearing points, release tension on each string before increasing it, and make demonstrative, passionate explanations about all that, and more, to the client before I start. I've already told you why pianos shouldn't drink. 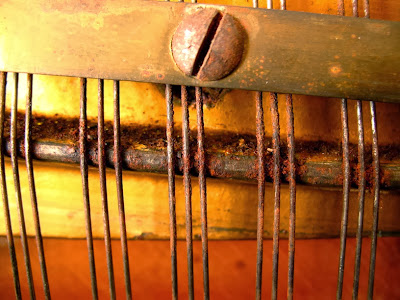 Before I tuned, there was a broken plain wire string to replace in the mid-range. The very interested client almost became my scrubs nurse, wanting to hand me tools every time I looked over my shoulder. There I was striving for neat perfect coils that would make my Sensei proud. Then, further up the piano, I find not only perilous rust, but some pretty dodgy, messy coils, too! Bush week comes to the city. 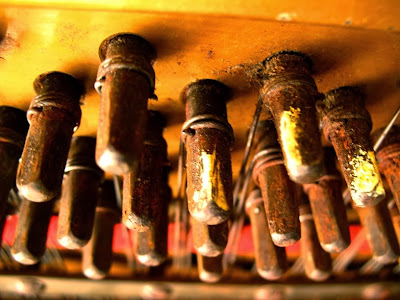 Do you see the hints of chalk on some of the tuning pins? That is how my colleague had marked up this particular problem area in the treble. The contamination of the pinblock had not only made the pins bordering on too loose to hold the necessary tension of these strings, but had also made them move strangely and unevenly when rotated ('jumpy', technicians say). These factors mitigate against a stable or lasting tuning.

I recently tuned a piano (and inspected two others) at a dance school. Three uprights. Perplexingly, EVERY piano was missing cabinet parts. Top boards (lids), upper front and lower front boards. It's disgraceful for pianos to be exposed in this way. Cover up your nakenedess! Have you no shame? It appears the parts have been lost. How do you lose three lower front boards?? They're almost a big as doors! One action was the dirtiest I'd seen (unless a piano was destined for the tip)... and it paid out enough coins for a very tidy profit. Coffee? My shout. My anguished scream.

Below, observe some very untidy keytop replacements I discovered. 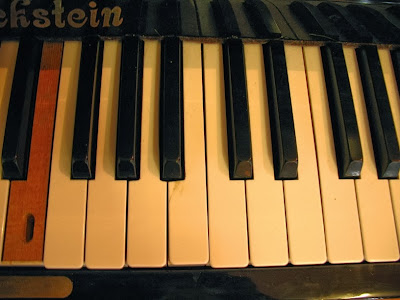 Variously too much overhang (or none!) not parallel, messy filing in the throat area (where the white keytops fit around the black keys - look particularly at notes A and B). I laughed with the client assisting me with the inspection, suggesting that it was an orthodontist's dream. Good thing we'd established a laugh-and-quip rapport.

Here I am whinging about it (in an educational manner), but what am I doing? I'm not sure yet! I just don't know where to find a piano clothing store.

* My bedroom blackout shutter broke (closed) this morning so I can’t even see out of my shoebox!

** With a specially-formulated piano-specific lubricant - not your standard shed fare.