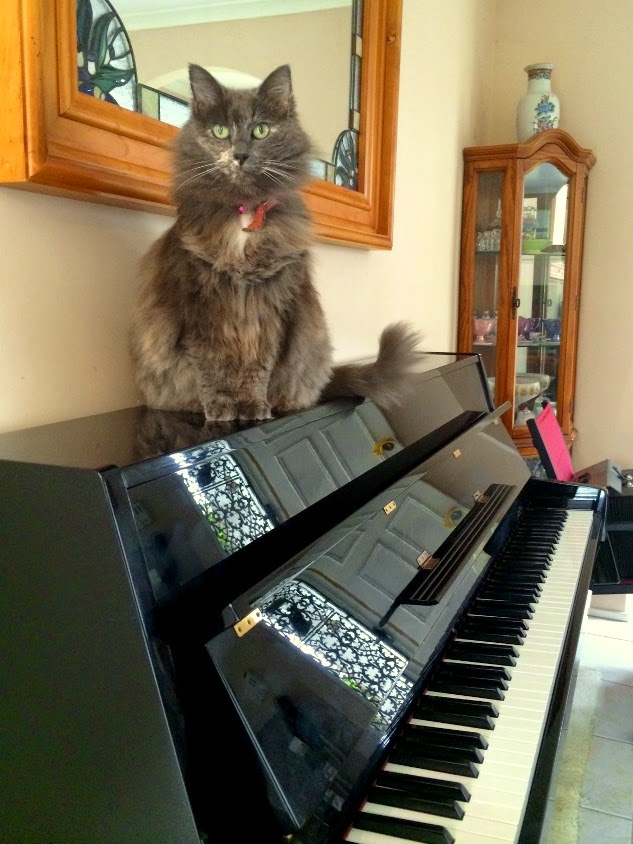 A fabulous feline is first to play the freshly tuned piano, floor to stool to keys to top. 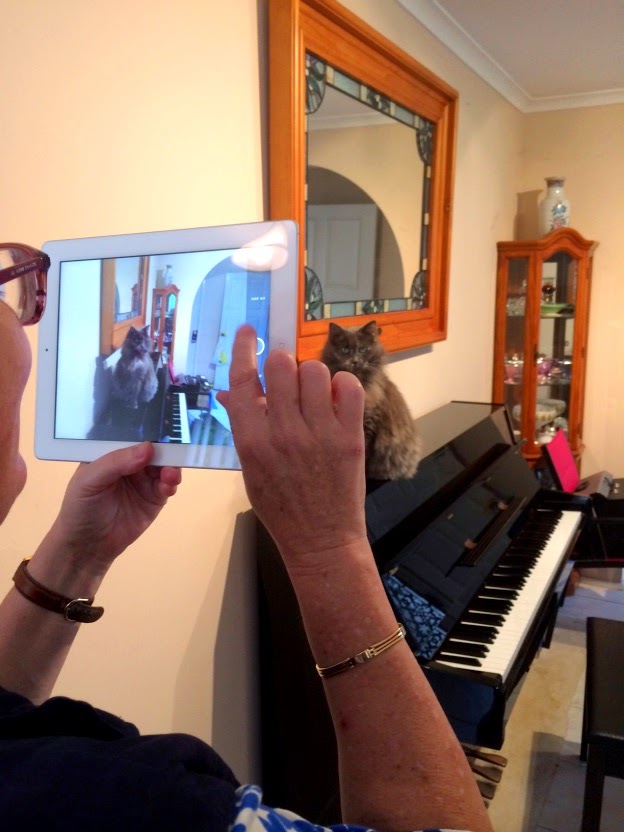 My delight rubs off on the cat's staff. This cat has a deluxe 'cat gym' - a complex outdoor caged 'run' in which to frolic or sleep, keeping the local wildlife intact. 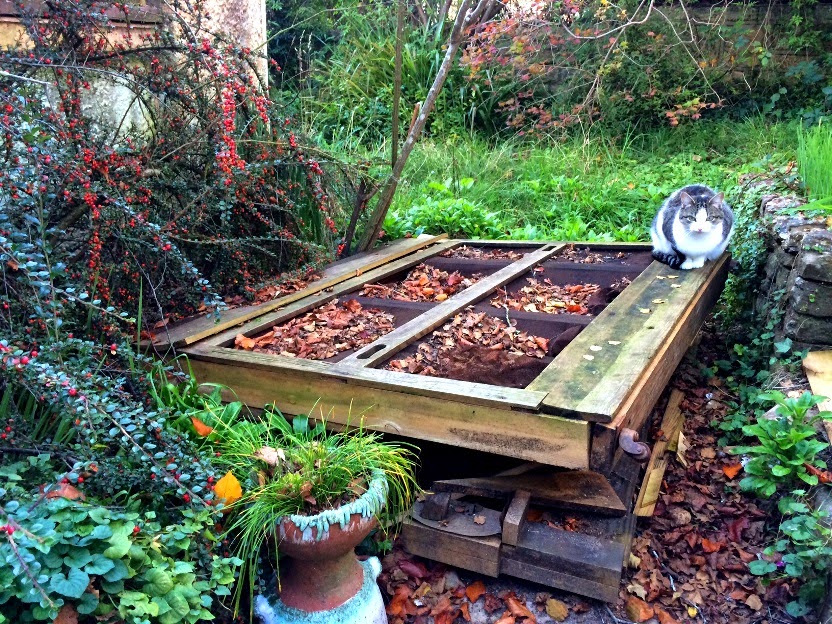 From a cat sitting on a piano - to a cat sitting on a piano. Welcome to the '...and garden' department. Yes, that is a piano, flat on its face, and flat long before that. The client was persuaded to procure a functional instrument - which this piano was not, even when it was in the house. Conveniently reimagined as garden trinket (well, that's as far as they managed to drag it) it stood with vertical grace until it toppled over in a high wind. Its timbers have increasingly found redeployment providing winter warmth. 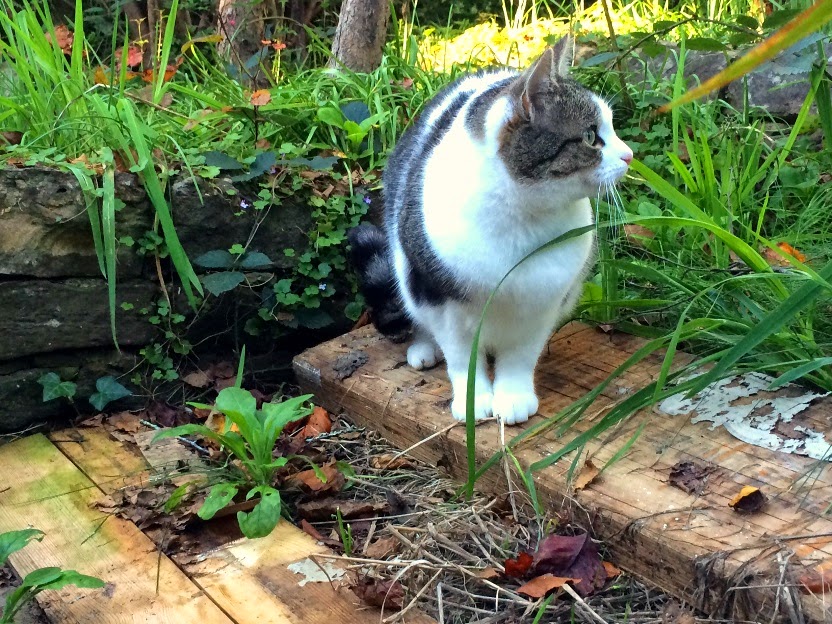 I'm sorry, but I firmly believe that the internet does not have enough cats! 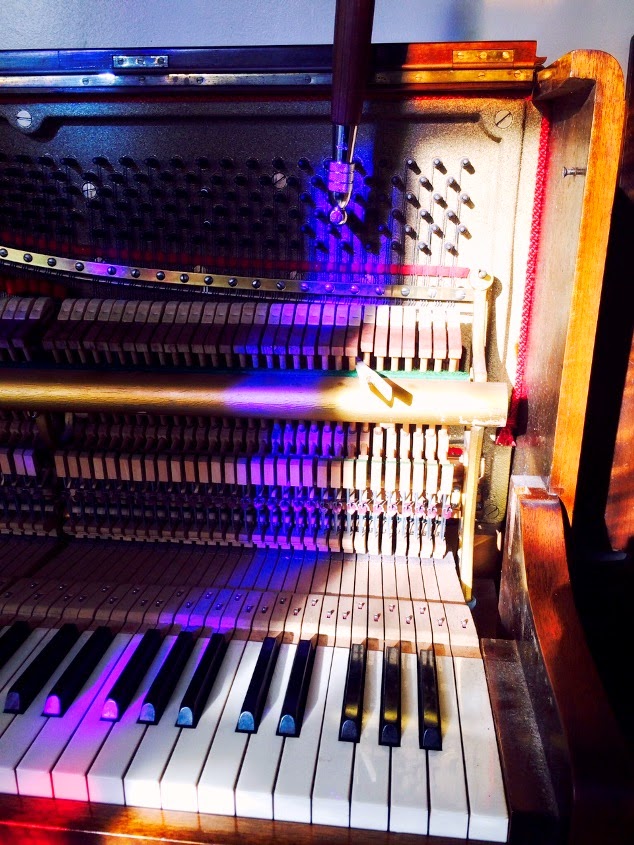 "Yes, madam, direct sunlight is reaching your piano." It's my opportunity to reinforce the client's intention that this location for the recently-arrived piano be temporary, while floors are replaced in more piano-friendly areas. Here, the changing light as I tuned was beautiful, I admit. And having some decent natural (indirect) light earlier while replacing several bass strings was a boon. 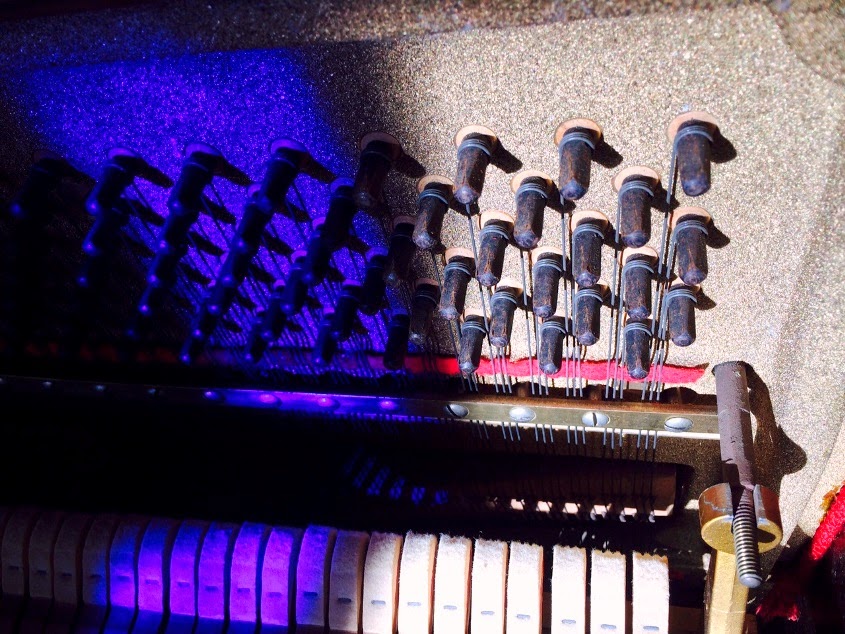 It is undesirable to have sun beat on one part of the piano, even through the cabinet. This lovely space, which deeply nourished my Inner Cat, still prompted me to discuss the fact that this enclosed veranda will cycle through a much wider range of climatic variation than the rest of the house. 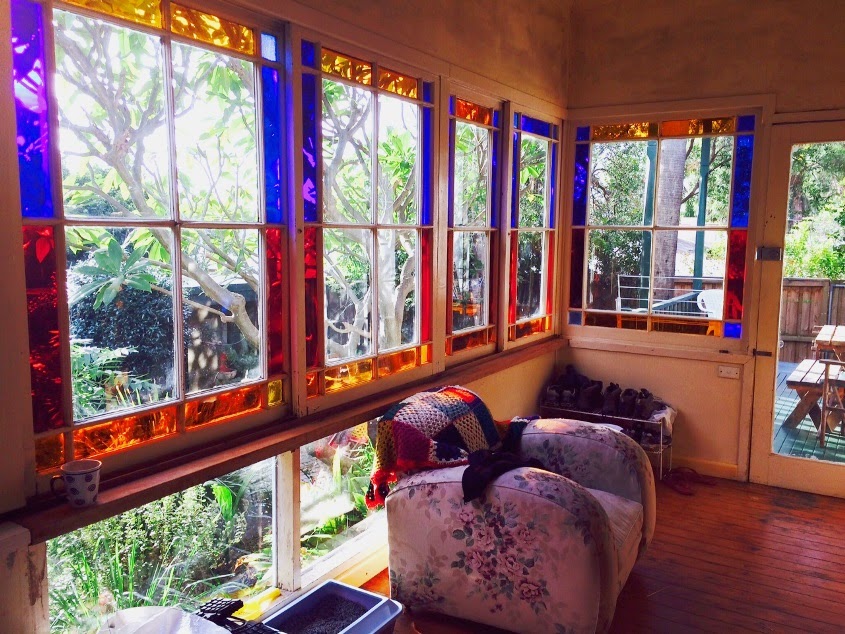 Winter beckons. The sun's angled reach streams across the space. Several of the trees will lose their leaves, giving the direct rays full access to pass across the piano daily, coupled with increasingly cold nights. Window coverings and other options were touched on, but the plan for another move is a more satisfactory goal. 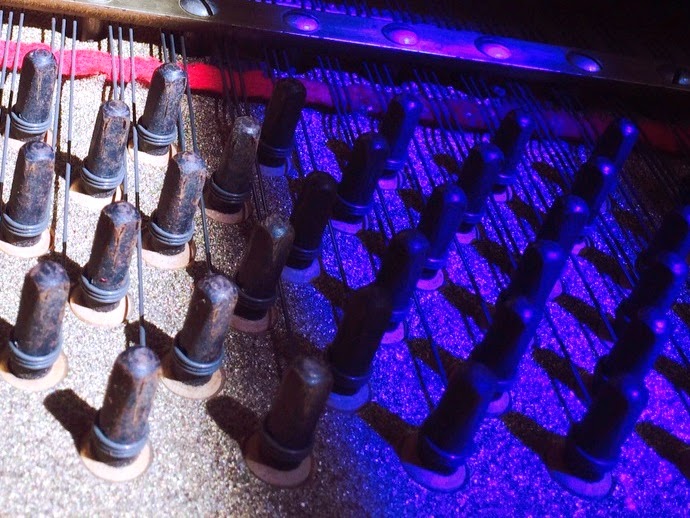 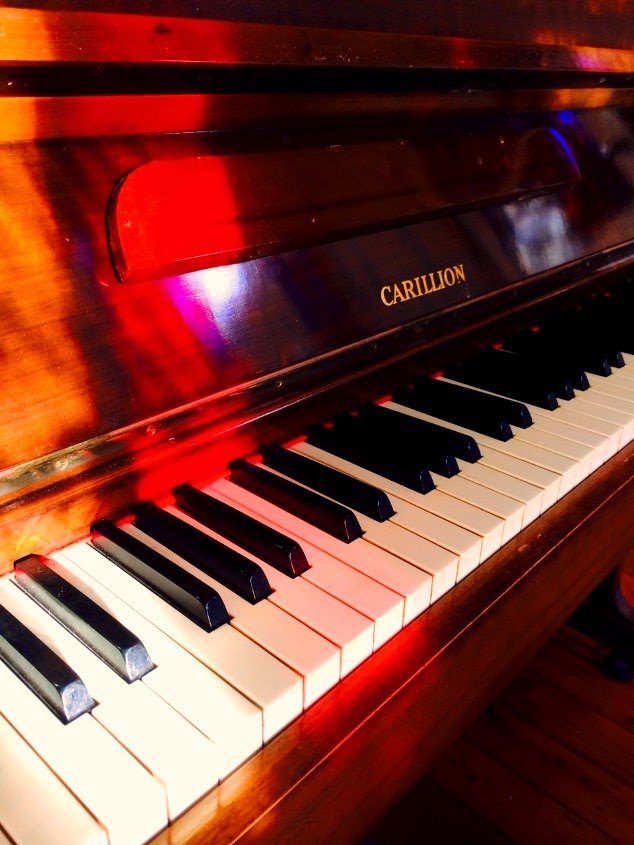 Kind of red. By the time I've finished, replacing several broken strings then pitch-raising and tuning, the light has changed again. 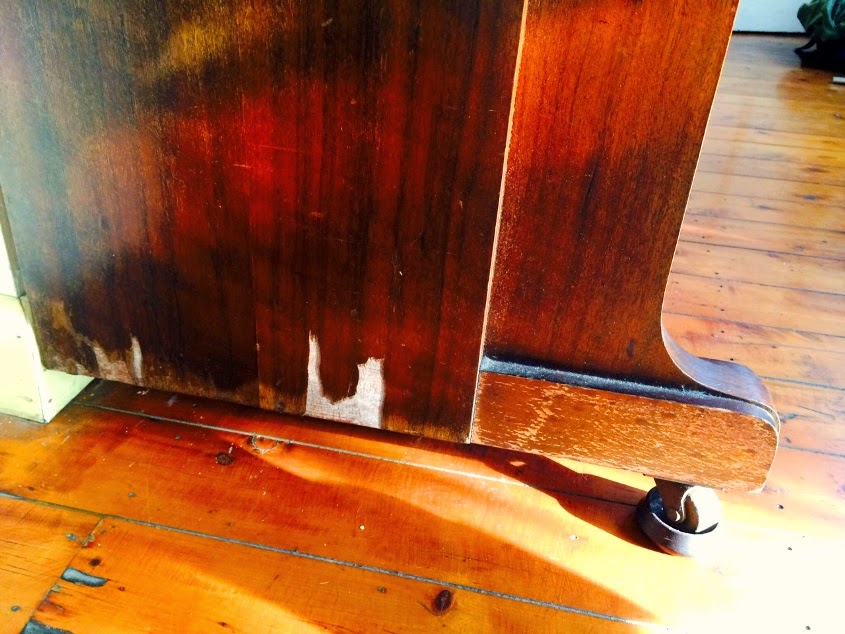 The sunroom piano has a dark past. A dank, yes dank, environment in this piano's former life, with water damage evident, helps explain the rust-fest in its nether regions and the collection of bass strings that had broken at the hitch pin eye (at the bottom of the string) rather than up around or near the tuning pin. 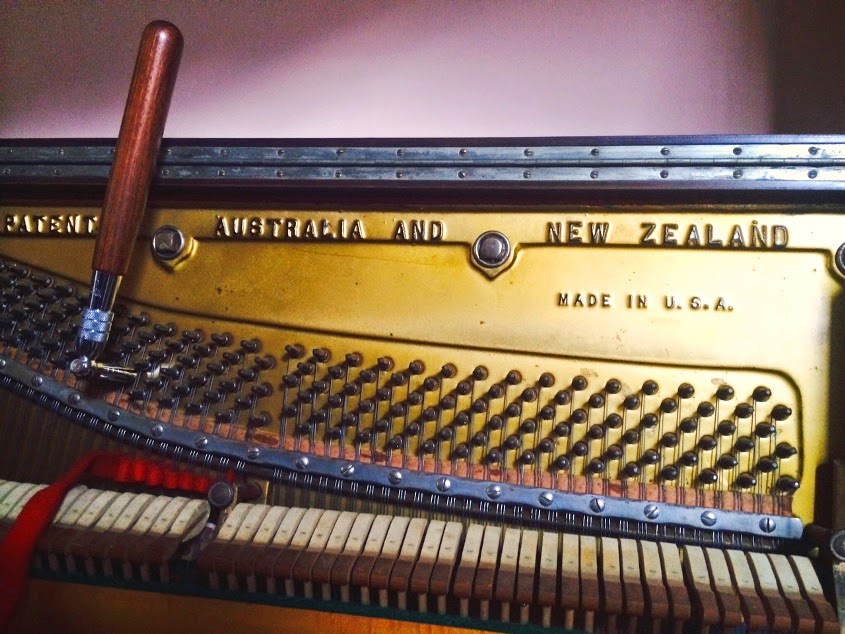 Another splendid rustic example of bespoke branding in pianos destined for our hemisphere. The local piano stores marketed powerfully long before the dubious verb 'to friend' (on Facebook) had been gleaned. 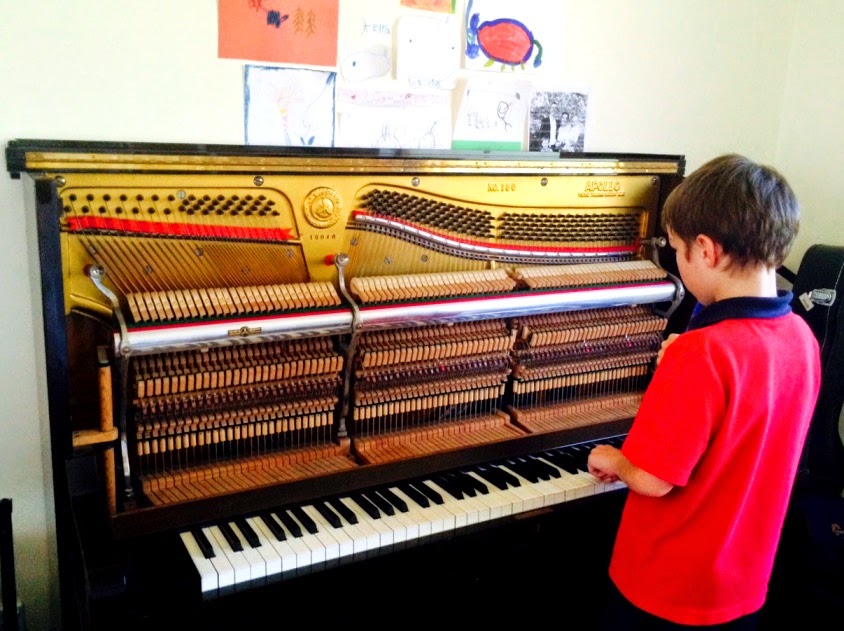 A rare opportunity to see what happens inside the piano when you press a key. It is not only children whose childlike wonder emerges, unadulterated, at this time. 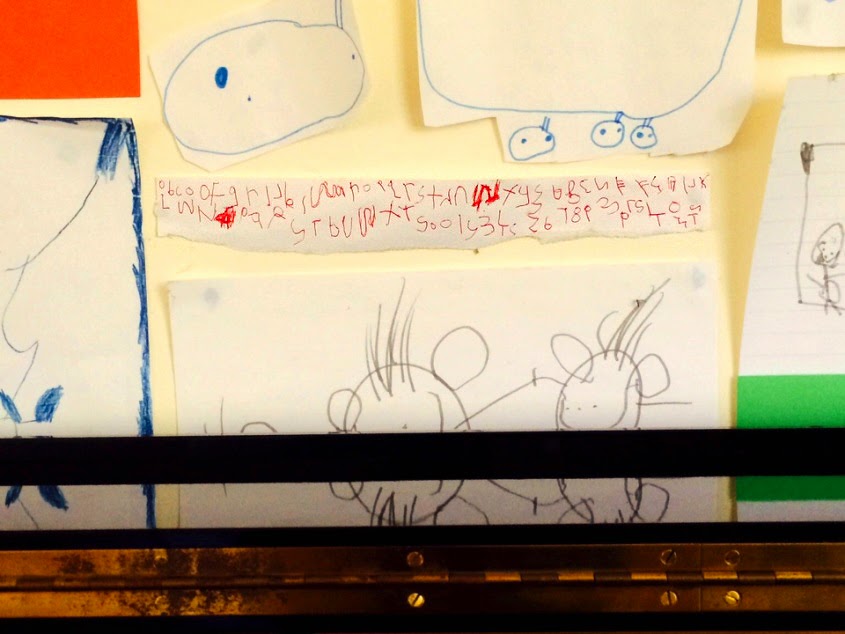 Meanwhile, I enjoyed the artworks in the gallery above the piano, pondering the particular significance of this intriguing red pen Rosetta Stone as I tuned. 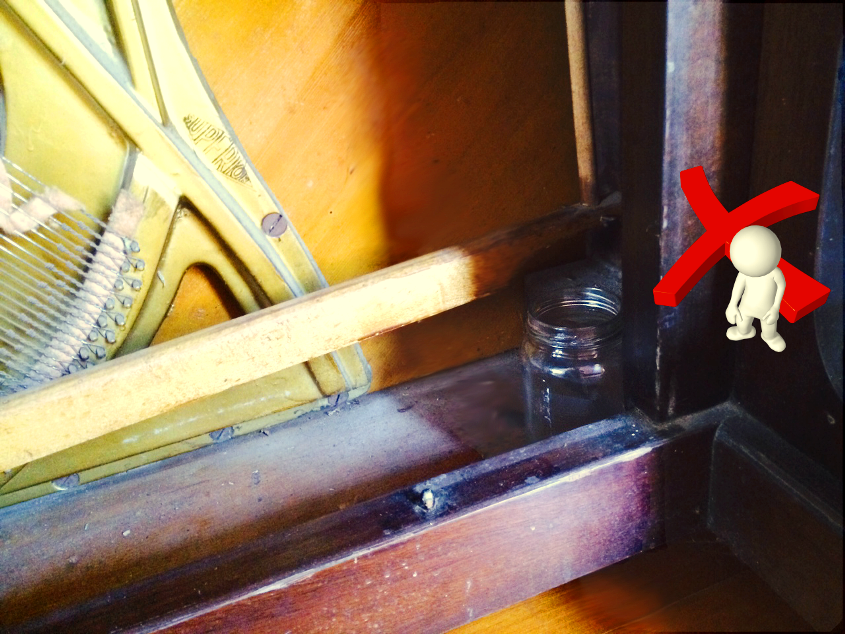 Don't listen to the Old Wives who may advise you to place a jar of water inside the bottom of your piano. Sydney is more than moist enough, and such means are primitive, uncontrolled and at risk of being forgotten on moving day. Sophisticated and legitimate means of piano climate control do exist, and they are very good... 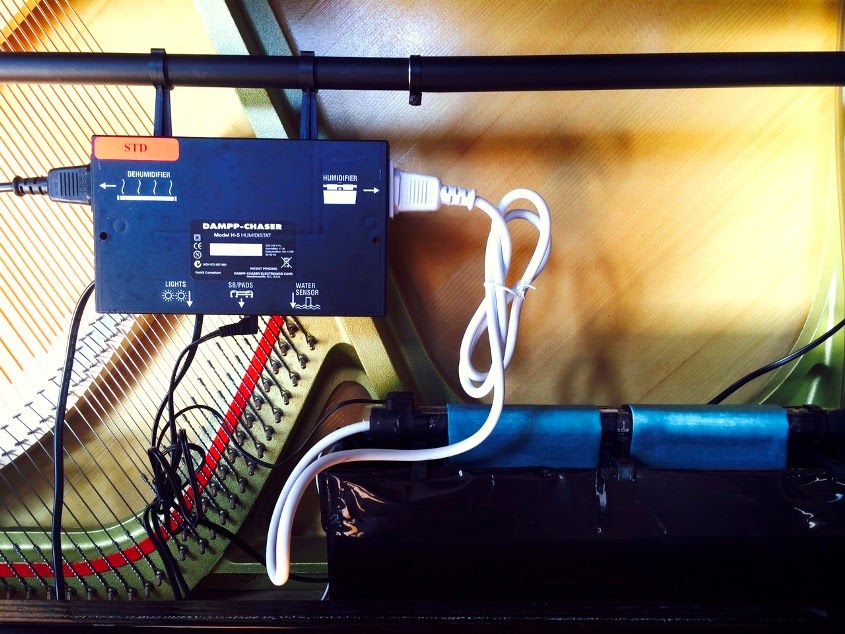 A thermostat determines whether to activate the dehumidifier (the horizontal heating rod) or the humidifier (admittedly, in part, a vessel) with water and additives, its own smaller heating rod over which special cloth-like pads are placed (those blue things). The intention is to ensure that the piano is exposed to a narrower range of variation in relative humidity. Pianos don't like extremes. 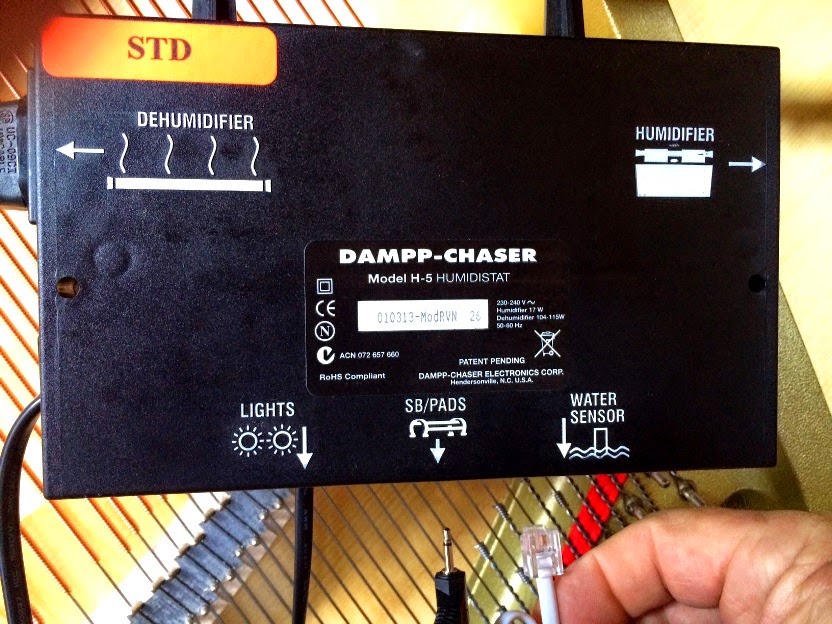 You may need to water your indoor plants - and your piano. 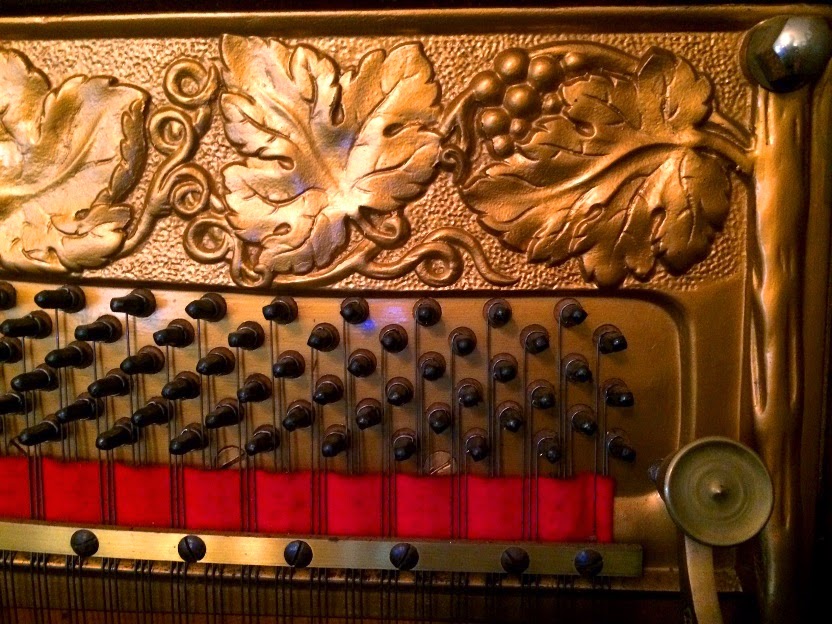 Could a watered piano sprout beautiful foliage? This ornate plate was a delight to find, such beauty is rarely seen by anyone other than the tuner. 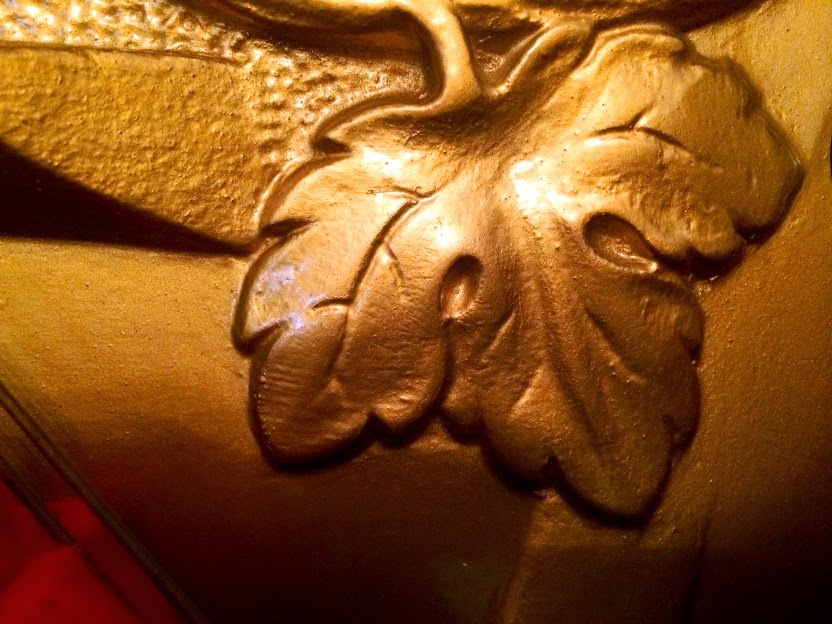 Tuning this grapevine piano surely counts as a dietary fruit serving (or could it at least negate the many chocolate biscuits I devoured on this job, please?) This piano has an interesting and unusual design feature, a tenor bridge... (a small bridging bridge, if you will, between the bass and treble bridges).

More tales of clunkers and non:

Pianistic peregrinations (or why pianos don't like sun, swimming, nor sheds)