In the tumultuous world of event hire pianos, they're not all grands, the uprights in the fleet see their fair share of the action. 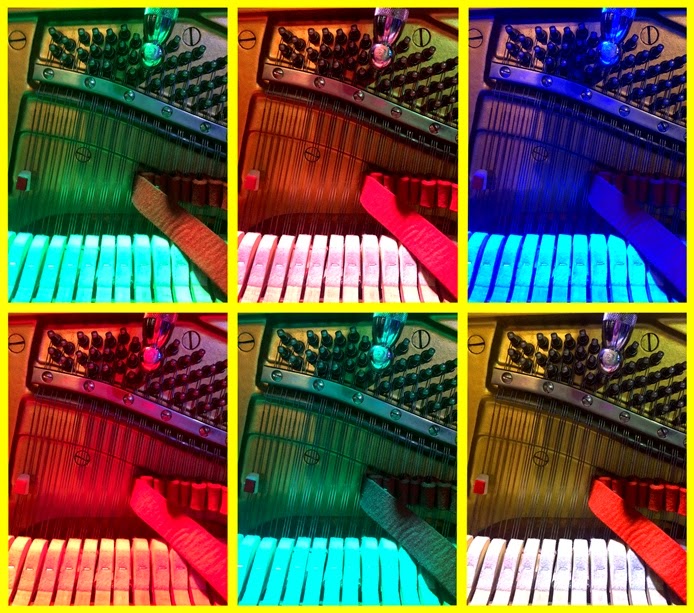 Don't mention the Warhol! I mentioned it, but I think I got away with it. The surreal experience of tuning a theatre piano under multi-coloured rapid strobe lights saw me searching for a calm place in my head, and flowing with it. I used the rapid-burst mode to capture the above selection, and fashioned a few seconds' video into this clip. At least it's easier to deal with intrusive lighting than intrusive sound when tuning a piano. It's different if repairs and string replacements are called for... thence I require three pairs of spectacles, under protective goggles with a jeweller's eyepiece attached, the light of five suns... and I'm still ten-thumbs-and-can't-see-a-thing! 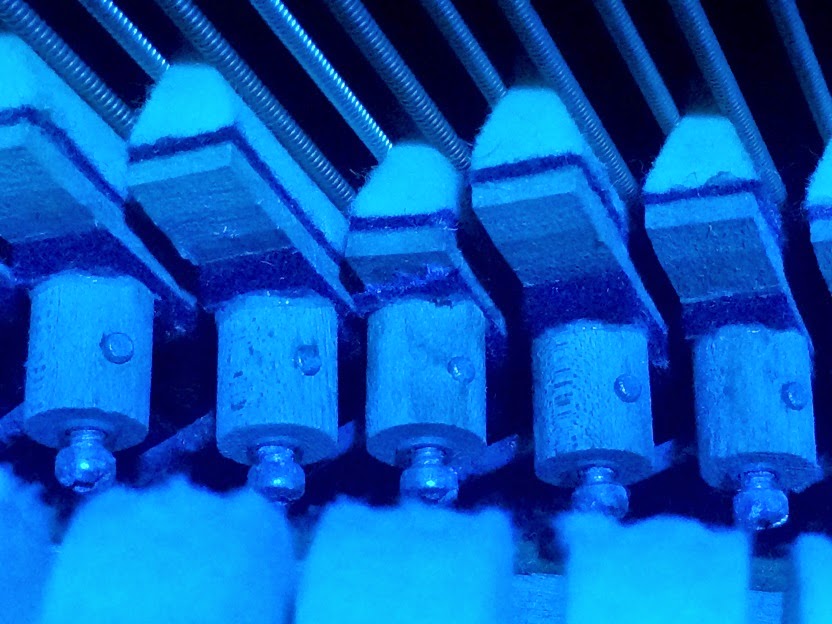 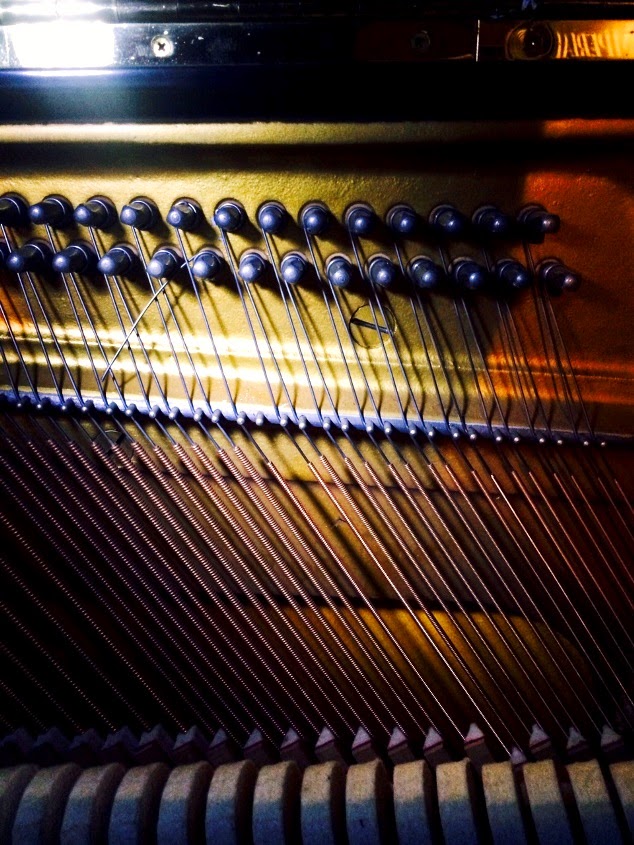 Much of the theatre's continued drama is inside the piano, with lusty playing eliciting a series of broken bichord strings. With my trusty Aldi light I document the exact location as I retrieve another string to commission a replacement. I manage to skewer a finger as I remove the coil and waste wire and spend the rest of my time trying not to splatter blood all over the piano as I touch up the remaining new (still stretching) strings. 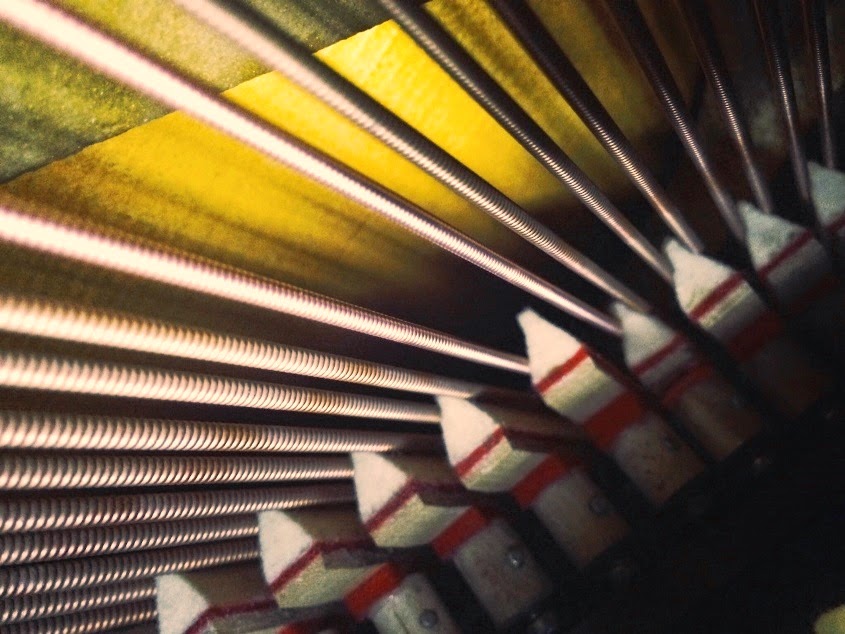 The V dampers nestle between pairs of strings. This V damper could not effectively silence one string. I subtly adjust its regulation to pull it closer to the remaining string for that note, and add some other discreet felt muting near the termination point of the string, to do my best to blend it in with the neighbouring notes until the replacement string can be fitted. 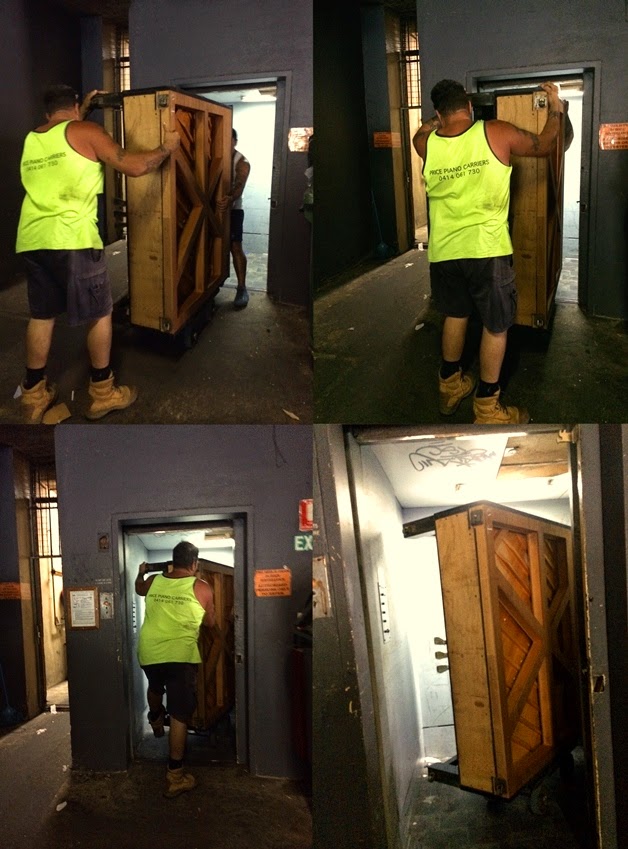 A small goods lift receives an upright the only way possible. On its ear. 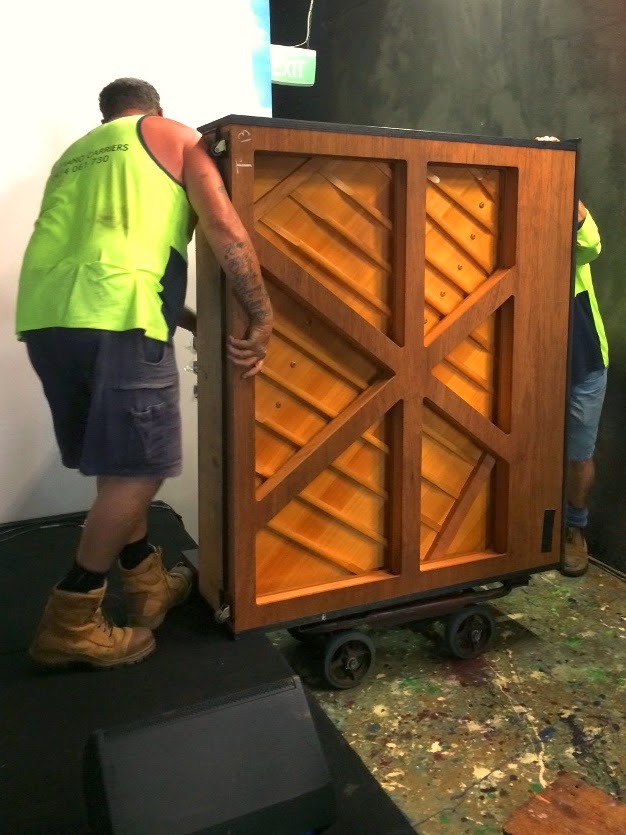 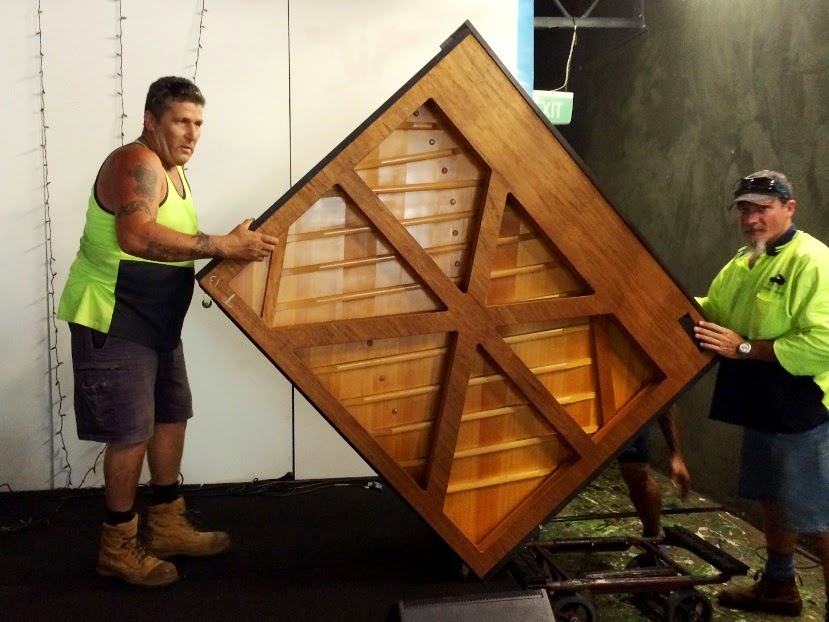 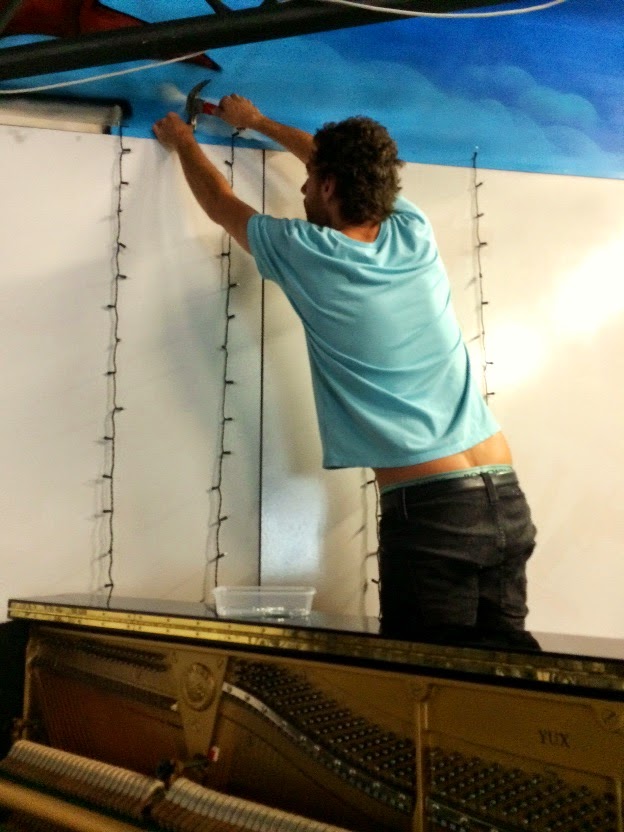 A place to park my bicycle. Actually, I drove to this gig.

It's utterly uncharacteristic for the event hire piano world and the humble clunker in its dotage to somehow coincide - but here, they have. When I'm told that a recording studio has hired a 'character piano' I suspect I've learned a new euphemism. 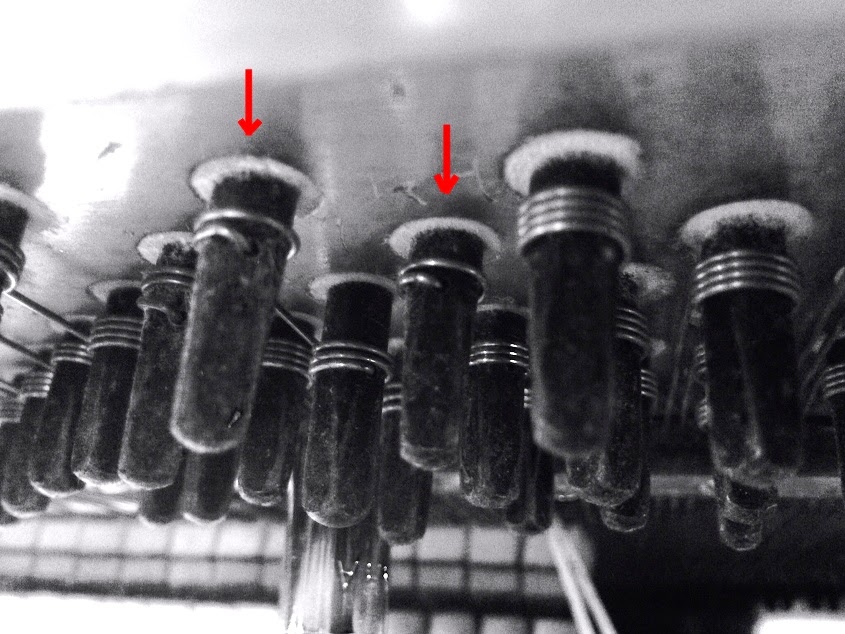 Tuning the regal but fragile old Rönisch, I document some rather sparse, potentially inadequate string coils before I touch them. Whew, no casualties, what a relief! I pack my tools as a sound technician arrives to install two microphone systems to the piano. The chance to reclaim the rest of my day suffers an unscheduled delay. The moment I learn that he proposes to insert some magnetic contact system behind the strings themselves, I feel obliged to stay to assist, advise and share in much scratching of heads and rubbing of chins. 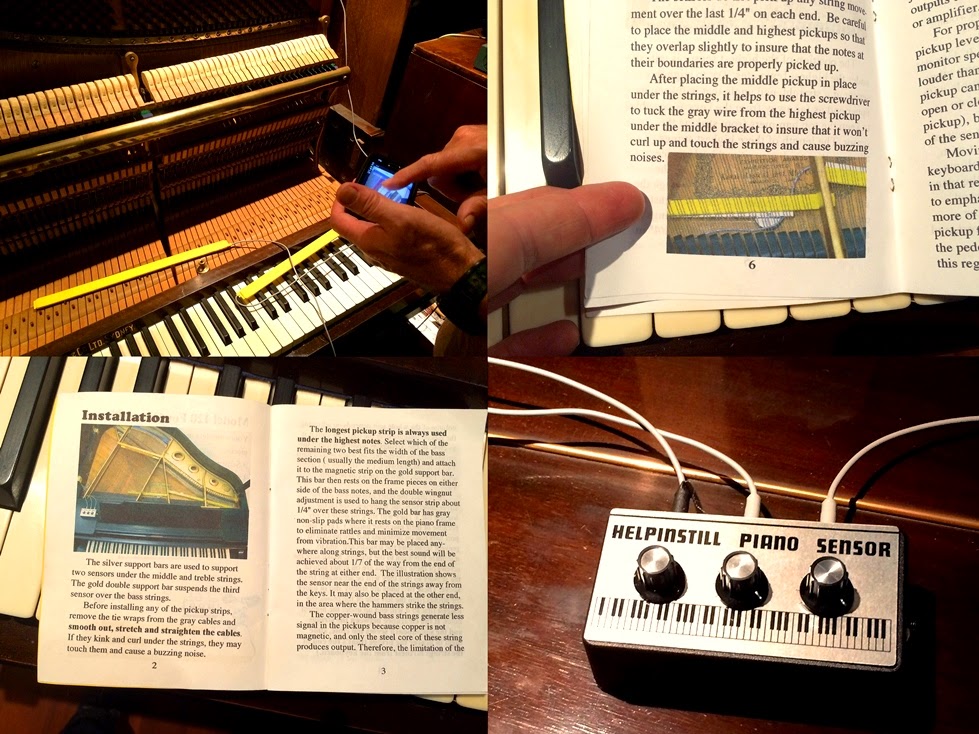 A phone-viewed YouTube clip of  'The Most Boring Man in the World' sees a two-minute tutorial seem to span an aeon, as instructions are pored over and subtly disobeyed. How best to deploy the kit's series of different sized sensor strips designed for a very different piano is quite the conundrum. Pianos vary widely with where sections start and end. We must find a way. 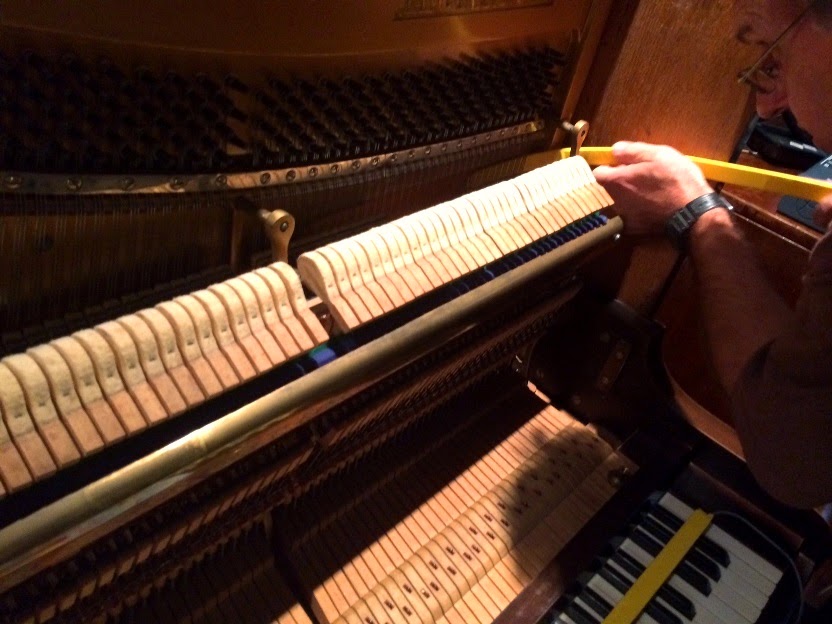 Initial explorations. Action out, I immediately suggest, wondering what mischief may have transpired had I already left. 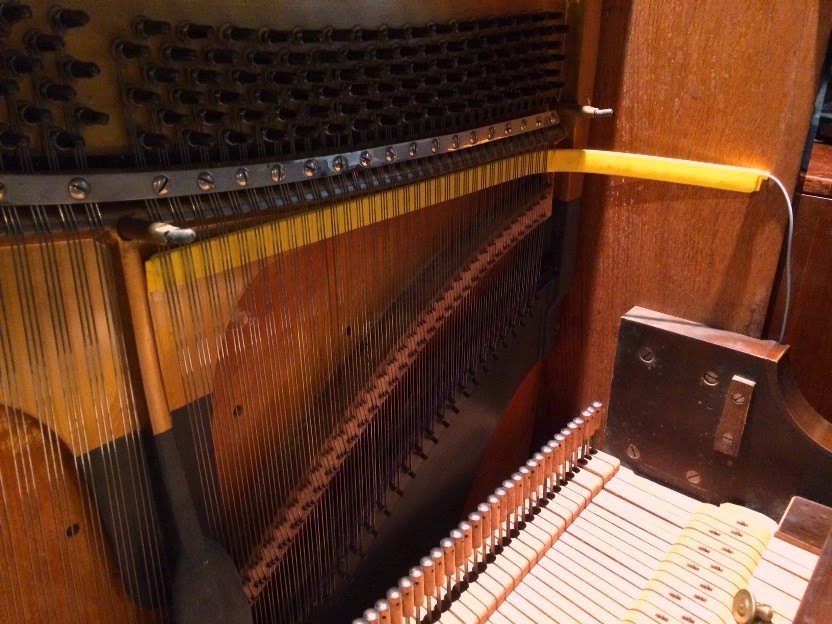 It's a team effort to delicately coax the microphone strips, guiding them with screwdrivers and tools, striving to control movement and tendency to curl, to keep them safely behind (and clear of) the strings. Gaffa tape is deployed on the ends of the strips for additional security. The whole kaboodle has to perform reliably in both of our absence. 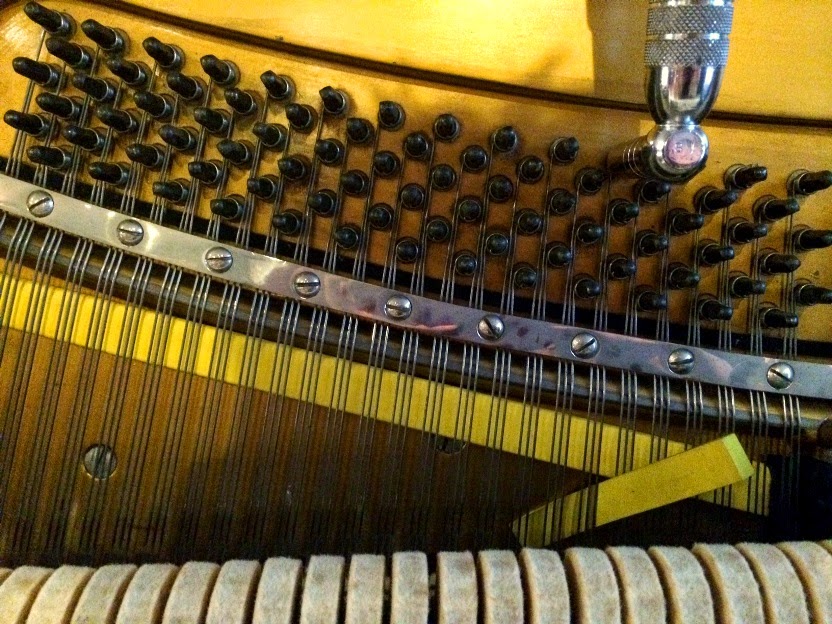 I touch up the tuning. My yellow wedge-du-jour seems sartorially selected for the occasion. 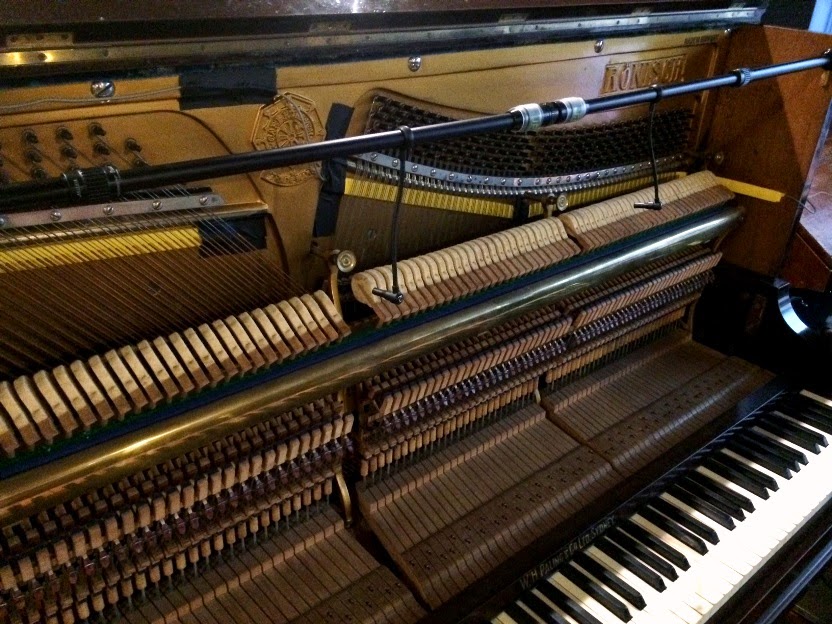 A second option for capturing the 'character' is installed. It is decided that the cabinet parts will stay off. This second series of microphones' adjustable pole attaches neatly to the lugs that normally hold the upper front board in position. At least it is not likely that this rig will slip out of position.

The 'character piano' copped a healthy dose of energetic New Orleans-style playing and when I next tuned it I found that a string loop (two strings with aforementioned sparse coils) had broken. I had a tricky replacement task, limboing under that darn horizontal mic rig (since it was so inexorably cabled in that removing it was certainly ill-advised). It was very shadowy and dark - has no one heeded my 'rider' stipulating the light of five suns for all stringing tasks? 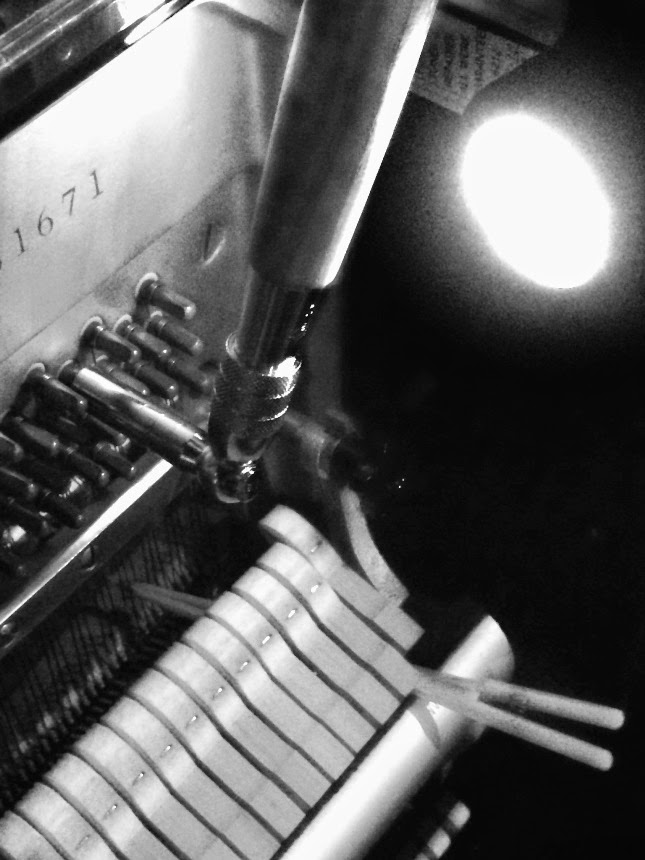 Back in the theatre with not so much as a fit-inducing multi-coloured strobe today, it's Aldi light to the rescue. The flamboyant Warhol-esque yet shadowy piano has recently renounced its sordid seedy string-shredding nightclub ways... 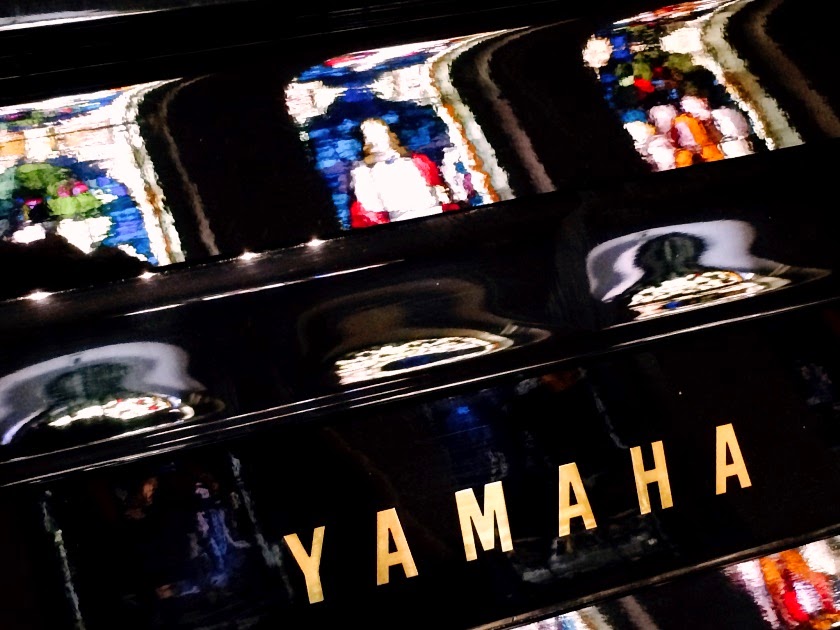 ...and was last sighted (and tuned) in a church. In Yamaha We Trust!