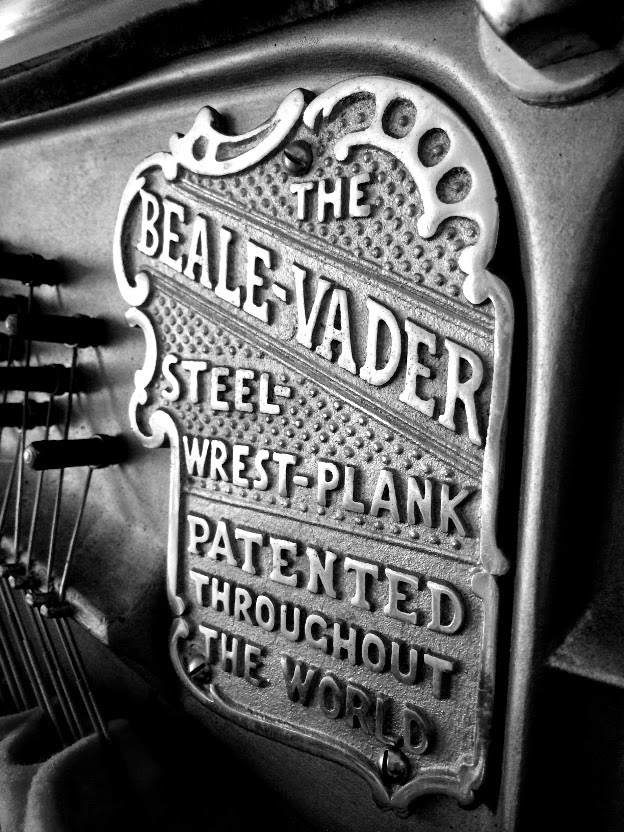 There is unlikely to be an Australian piano technician who hasn't encountered a reasonable quota of Beale-Vader steel wrest-plank pianos. I don't imagine that the (quite ingenious of design) Beale steels have really migrated to many other locations 'throughout the world'. Akin to Australia's oddest animals, but with few genuinely concerned by their threatened extinction - 'where seldom is heard an encouraging word'. More likely, you'll hear technicians' colourful language echoing through the hills as they head for them (the hills, that is). Tending these pianos presents some unusual challenges, and rarely are they in good order or well-maintained. If they are, they can hint at their cleverness and be almost pleasant to tune. Almost. 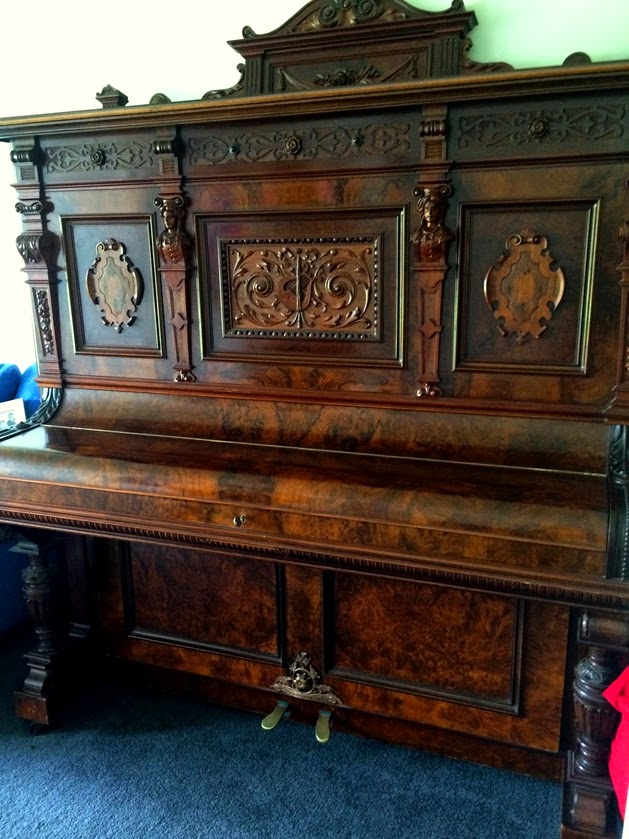 This particular Beale's astonishing height can only be measured via an ivory donor's ocular opening. 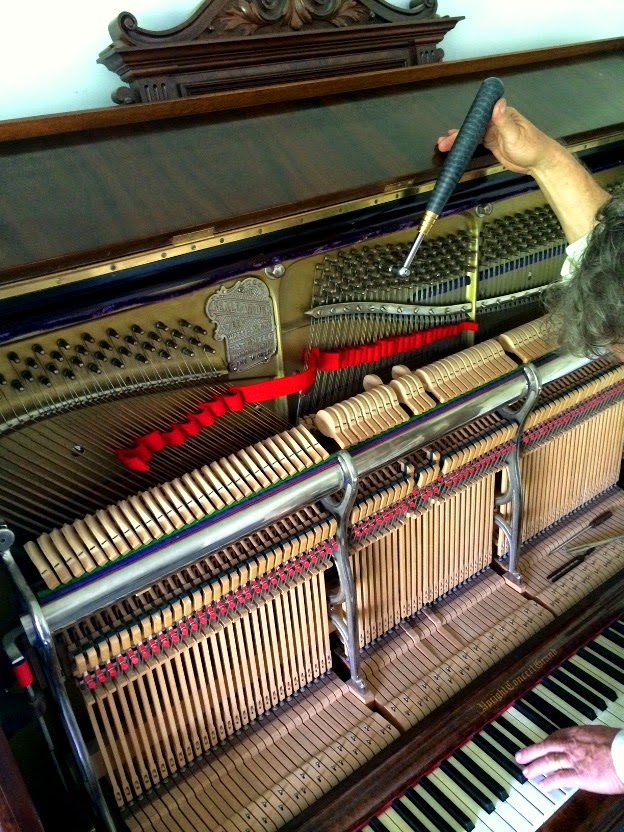 A tall upright piano might see a tuner of average height with the tuning hammer handle at head height. Here my trusted partner in piano-pampering proves it's quite a stretch, in more ways than one. 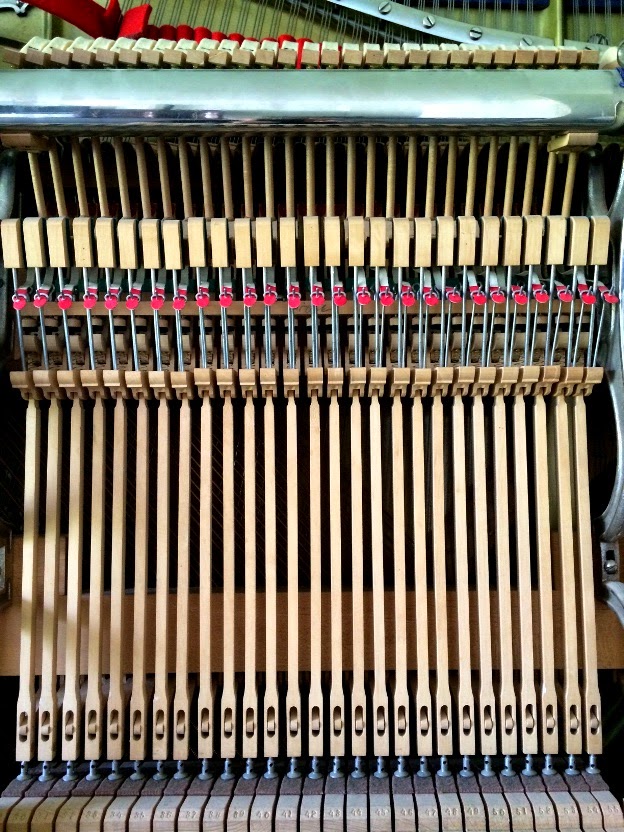 The portion between the rear of the key lever (and capstan) - and the action itself - is called the sticker in the US. I don't recall a British or Australian term for it, I might make one up. Short pianos generally do not have stickers, the capstans and wippen heels directly touch. Medium height and tall pianos may have stickers of moderate length, say, two to six inches. I wish I had actually measured these stickers, they'd have to have been a foot long, and made me go all Imperial at the knees. 'Upright Concert Grand'. This sort of language is bandied around in careless and confusing ways. Marketing hype and sizzle are not new. The tall Beale piano's scale length would come closer than many to this (still spurious) claim. 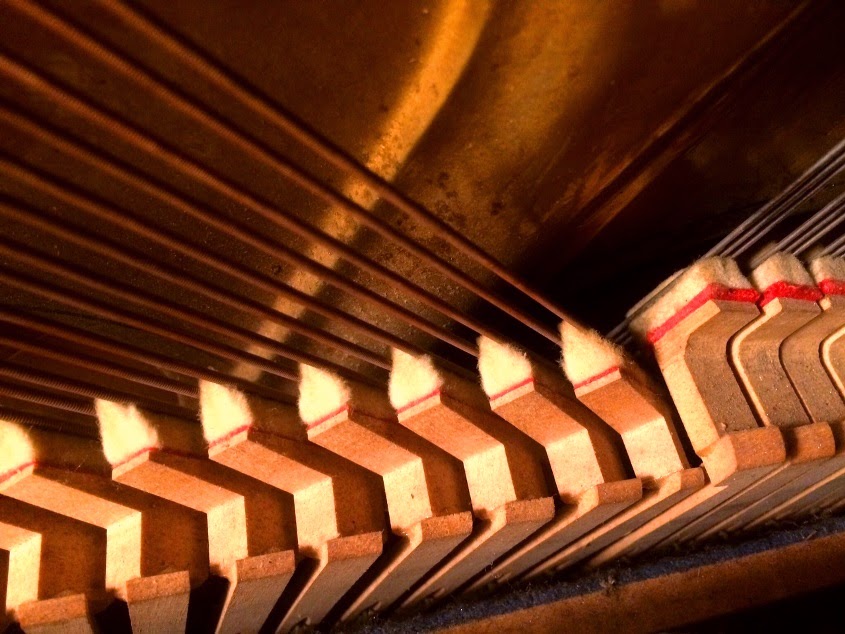 A Richard Lipp piano with distinctive all-wooden dampers. Felt is still felt to be best for silencing strings, of course. These dampers are characterised by their inability to be adjusted in ways that conventional upright dampers (with wire sections) can be adjusted - it's convenient as long as nothing needs to be done to them. This old dear is currently performing the role of 'Character Piano' in a recording studio, and it is proving to be a very regular tuning job to keep it sounding clean and musical. 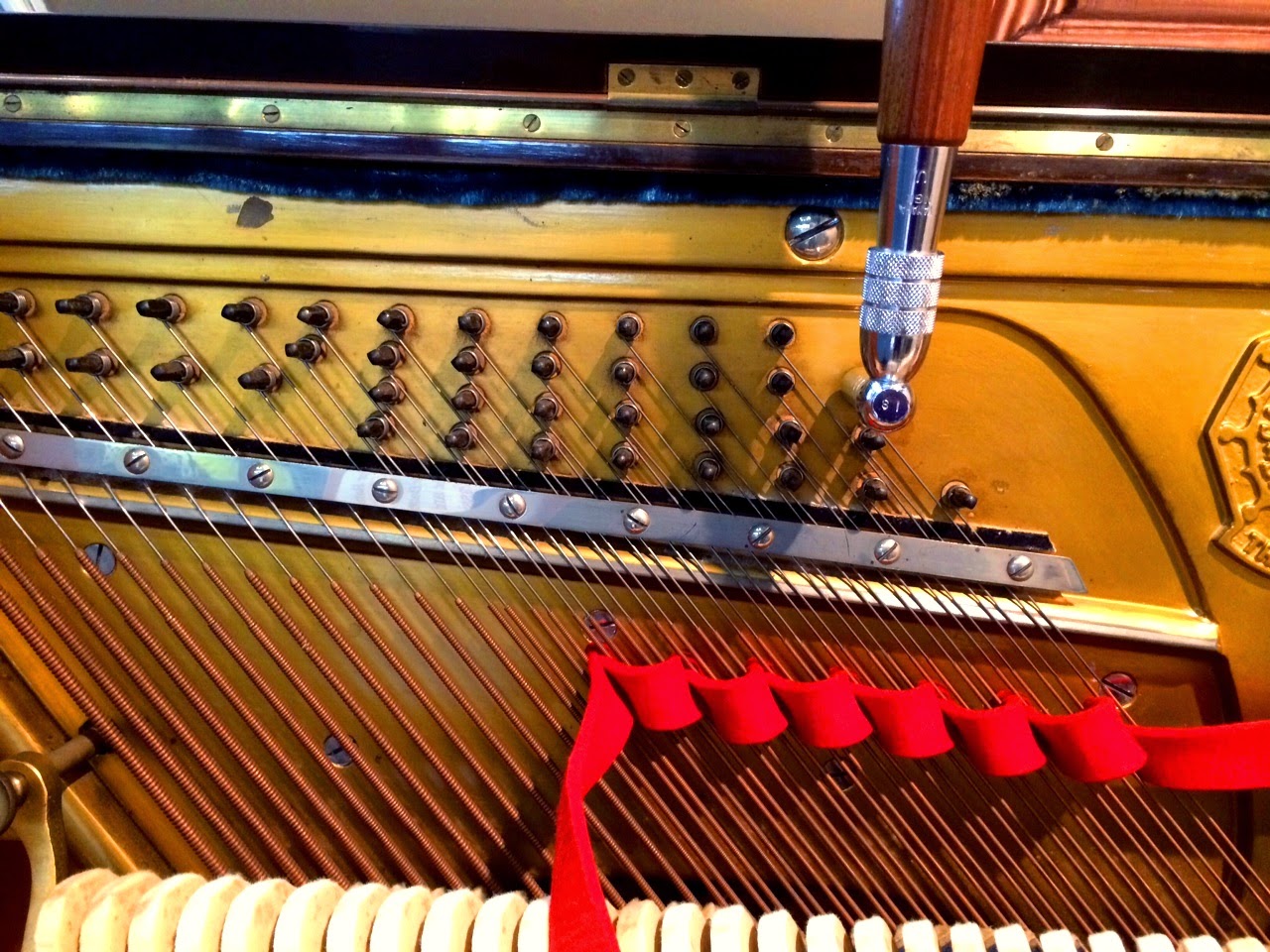 Another 'Character Piano' on set. There's something slightly odd about the pin layout on the bass bridge of this Rönisch that just throws my normal tuning stride. Out come far more instances of back-of-the-fingernail quasi-Braille technique to confirm which string and pin I'm on. And don't touch stringies with fingies, people! There are a couple of common 'standard' pin layouts in this part of the piano, and this one sort of conforms, but sort of doesn't, just another of my First World Problems. 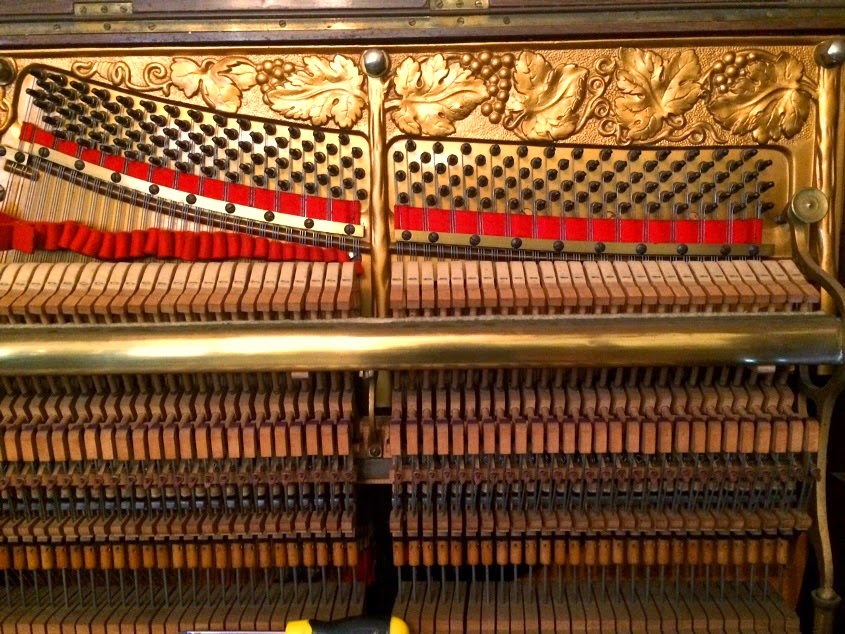 It's remarkable that such an ornate and beautiful design is seen only by the piano tuner. 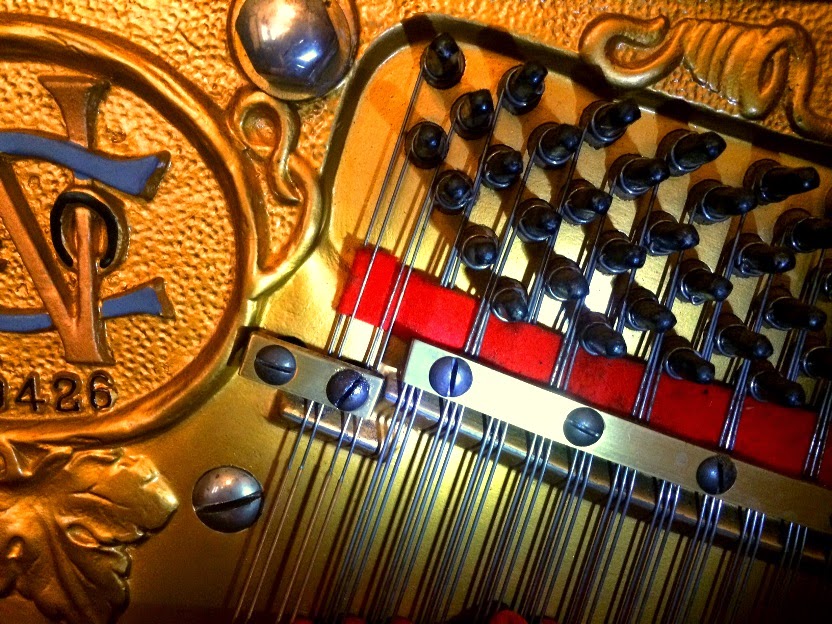 This gorgeous vine-entwined old upright has an interesting and laudable design feature, a tenor bridge. Observe the two lowest notes (two pairs of wound strings) on the left. The speaking (sounding) portions of those strings share a distinctly different starting position to that of the neighbouring plain wire trichords. The design enables a less dramatic change of (or reduction in) string tensions, which may improve tone, intonation and tunability. The client was charmed by my enthusiastic interest and keenness to document the tenor bridge. All pianos have a treble bridge and a bass bridge. Smoothly transitioning across 'the break' between the bridges is one of the great challenges in piano scale design, with varied compromises and problems. Here, at the bottom of the treble bridge, a bridging bridge, if you will, is deployed. 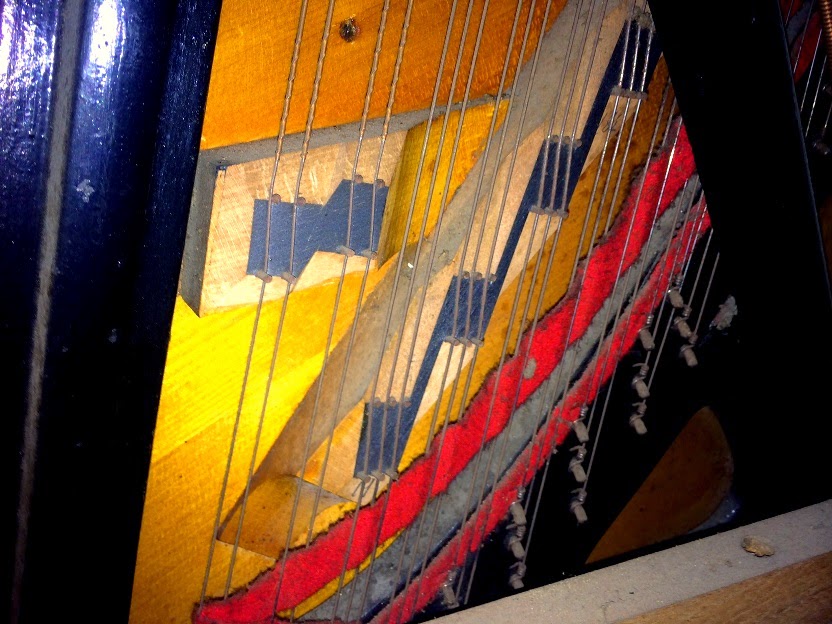 The view in the bottom of the piano: Note the tenor bridge (to the left of the lowest section of the treble bridge) on which two notes (four strings) reside. 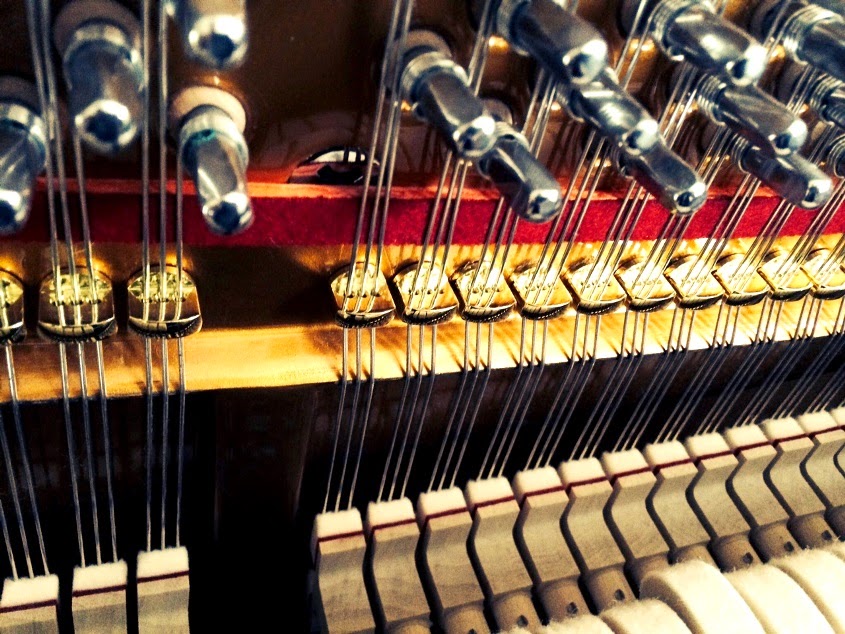 This design is a little troubled. Agraffes (those little snouts, where strings travel through the nostrils) AND an overly-steep bearing angle mean that this particular 'belt and braces' combo (with the angles involved) creates additional difficulty in persuading the strings to travel through the obstacle course. 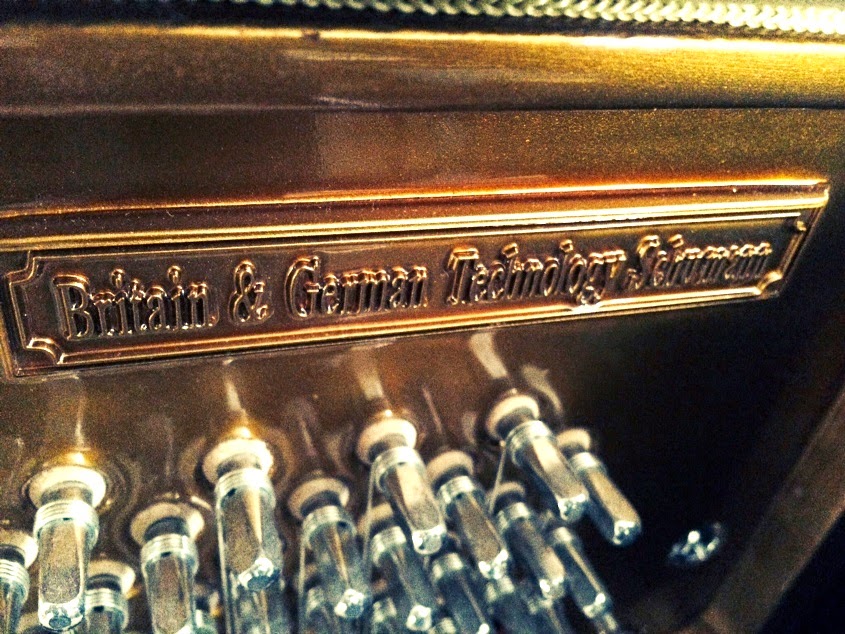 Who brought us the belt and braces? 'Britain and German Technology' of course! An uneasy alliance? I mentioned the agraffes but I think I got away with it. 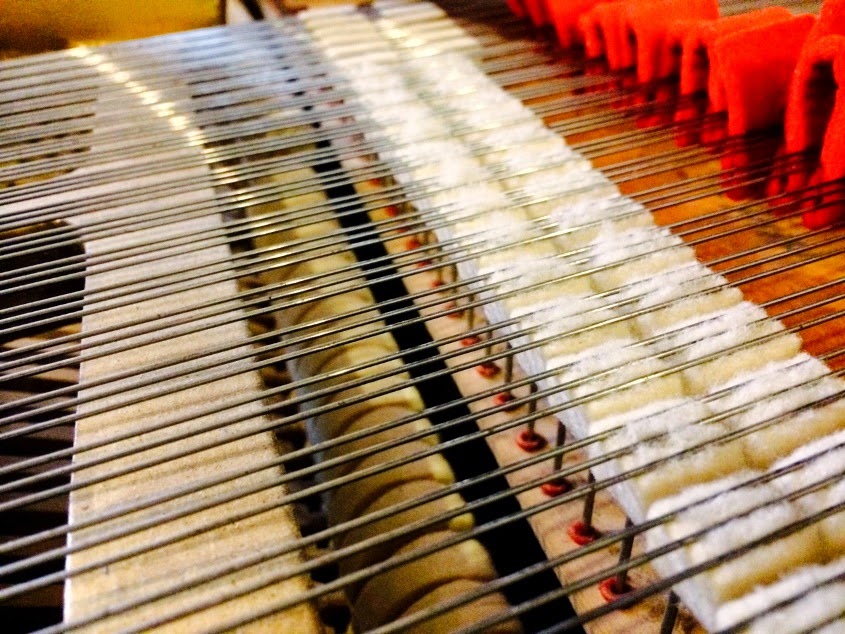 Unique, no question, upside down dampers! Normally grand piano dampers sit on top of the strings, here they nuzzle up from underneath. Fascinatingly fluffy and fun to watch. "Yes, yes, I am tuning!" 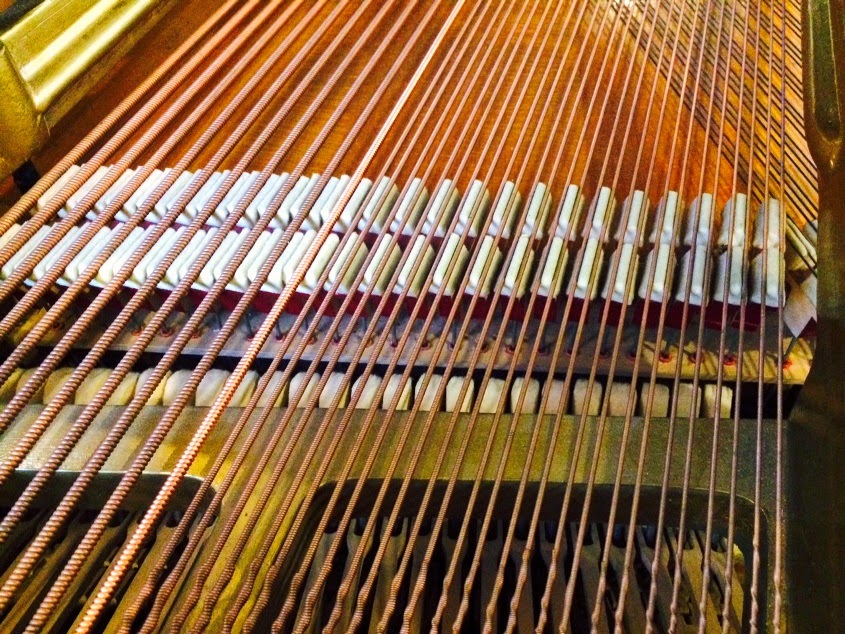 So cool and strange, vaguely reminiscent of that toothpaste ad with a cartoon man cleaning his teeth, where all the views of the action are from inside his mouth. Bicuspids on the bichords, by Jove! 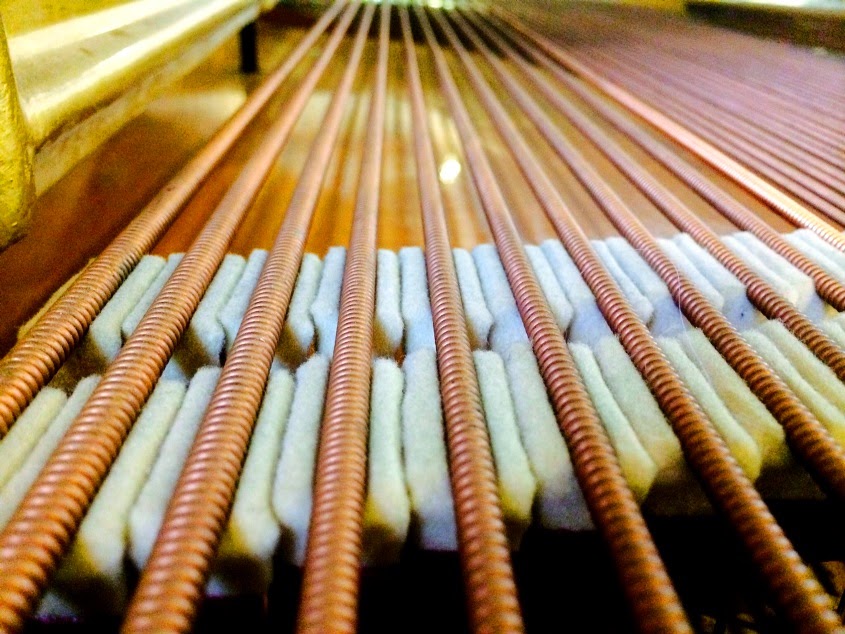 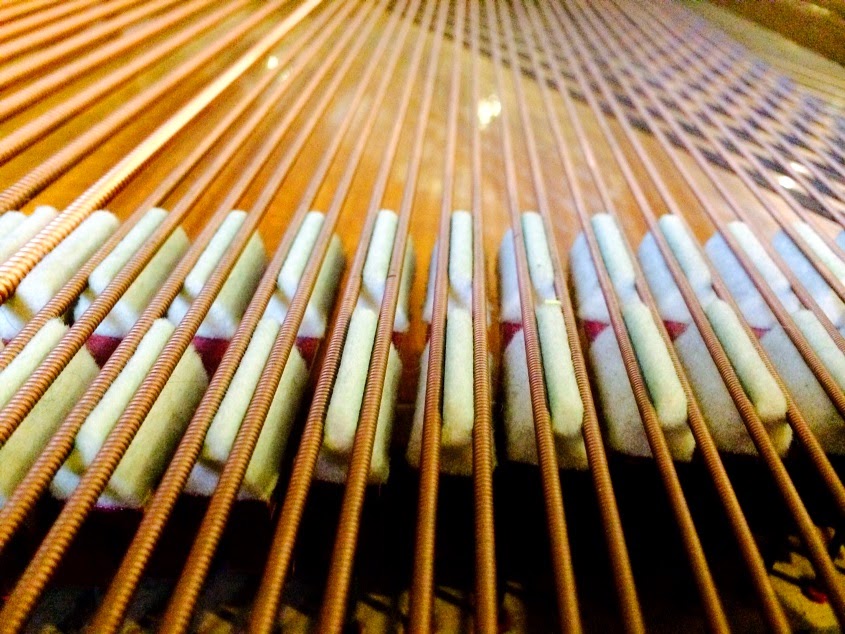 I said bicuspids, but really they're more like canines. 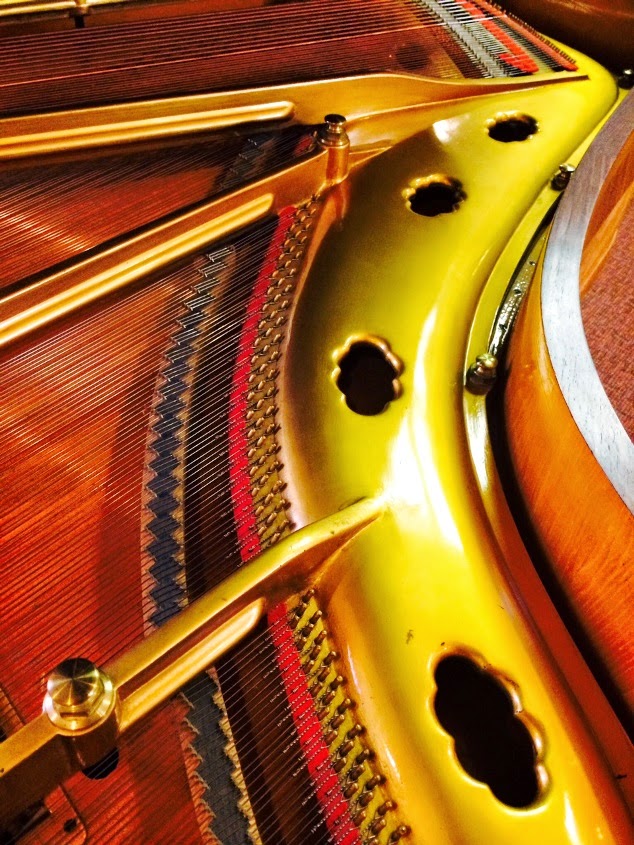 Plate holes like fluffy clouds - is everything about this piano fluffy? The client had mentioned that this piano had been donated by one of the inmates. Wait, that's not the right word, it's an aged care facility. Help - I'm losing my perspicacity - will I be able to find my way out? It was mentioned that the piano was Swedish, or so thought the staffer who told the story of its donation. It is French (Erard) but the Swedish suggestion sends my head off into the plate hole clouds as I tune, contemplating the notion of IKEA assembly gone wrong. 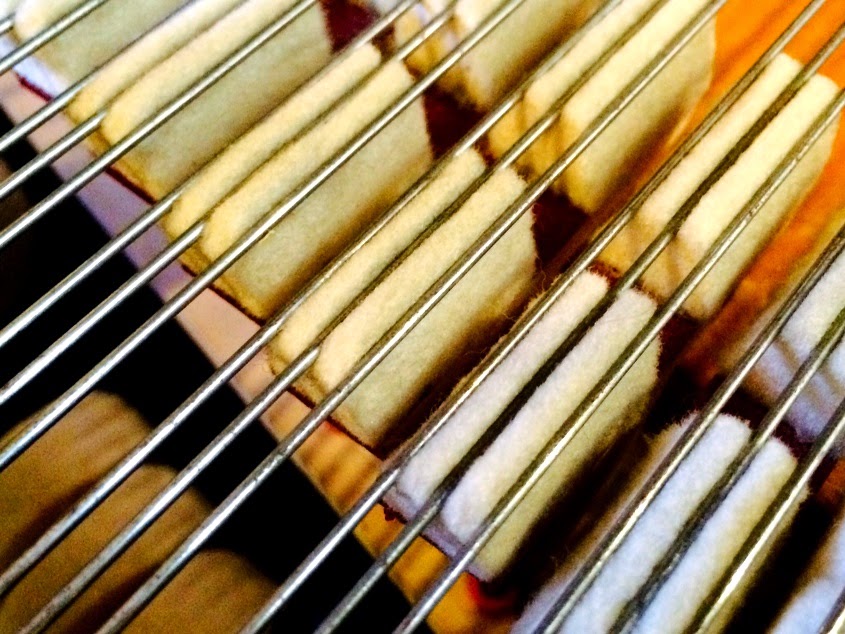 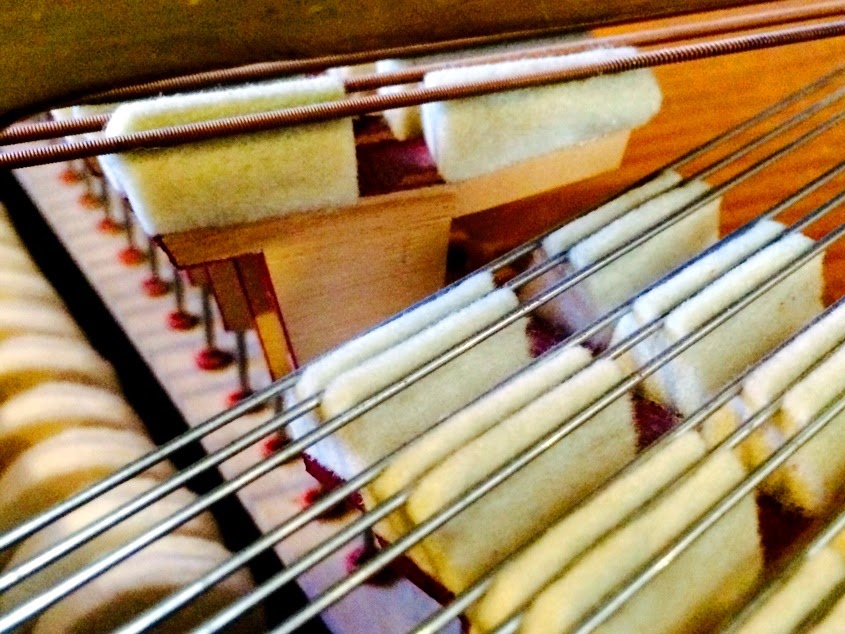 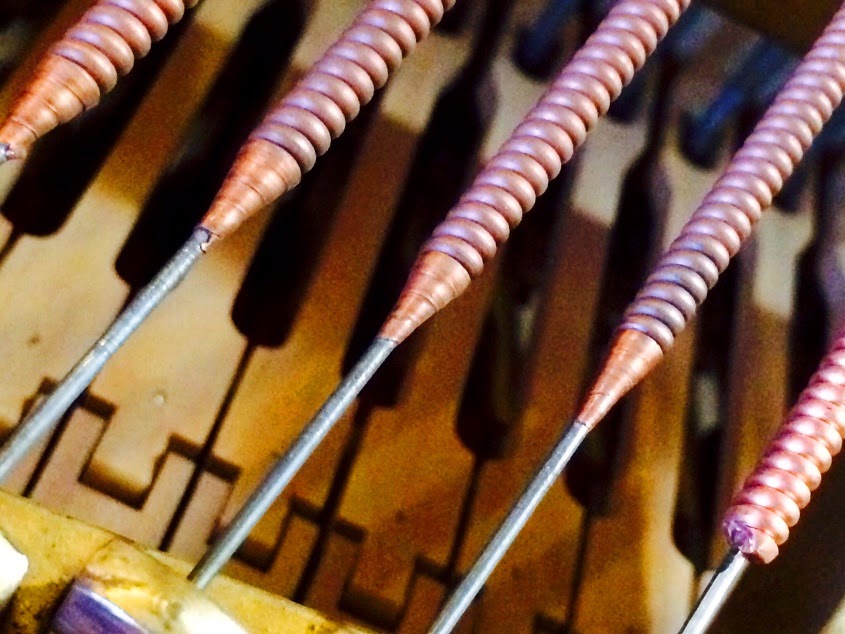 Ice cream cones. Swirly cast-off ends to the monochord strings, with the exception of the one replacement (far right) which has the more usual swaging (flattening) of the core wire to secure the copper winding where it terminates. 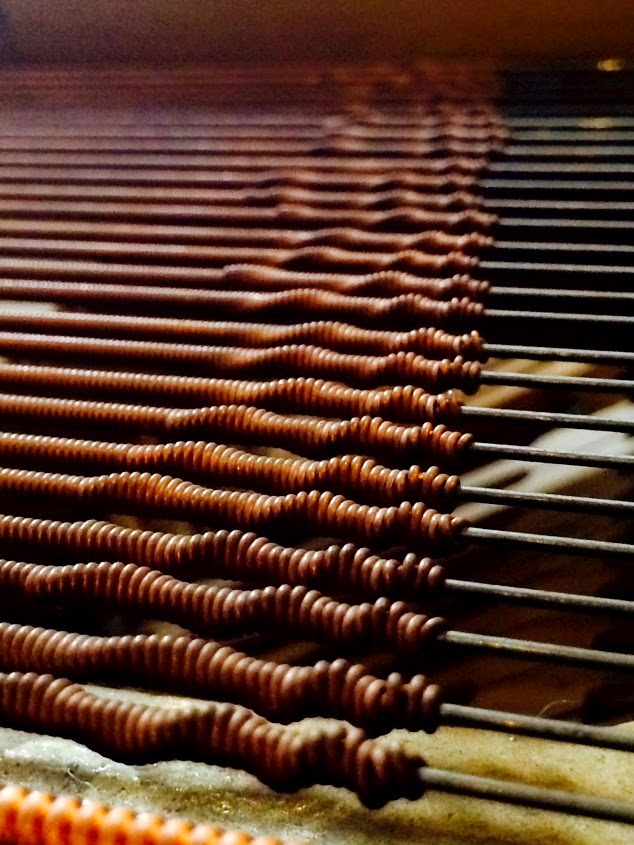 The strings in the bichord section demonstrate another method of termination for the windings. To me, this is more like what you do on a sewing machine to start - reverse a little, then forward. 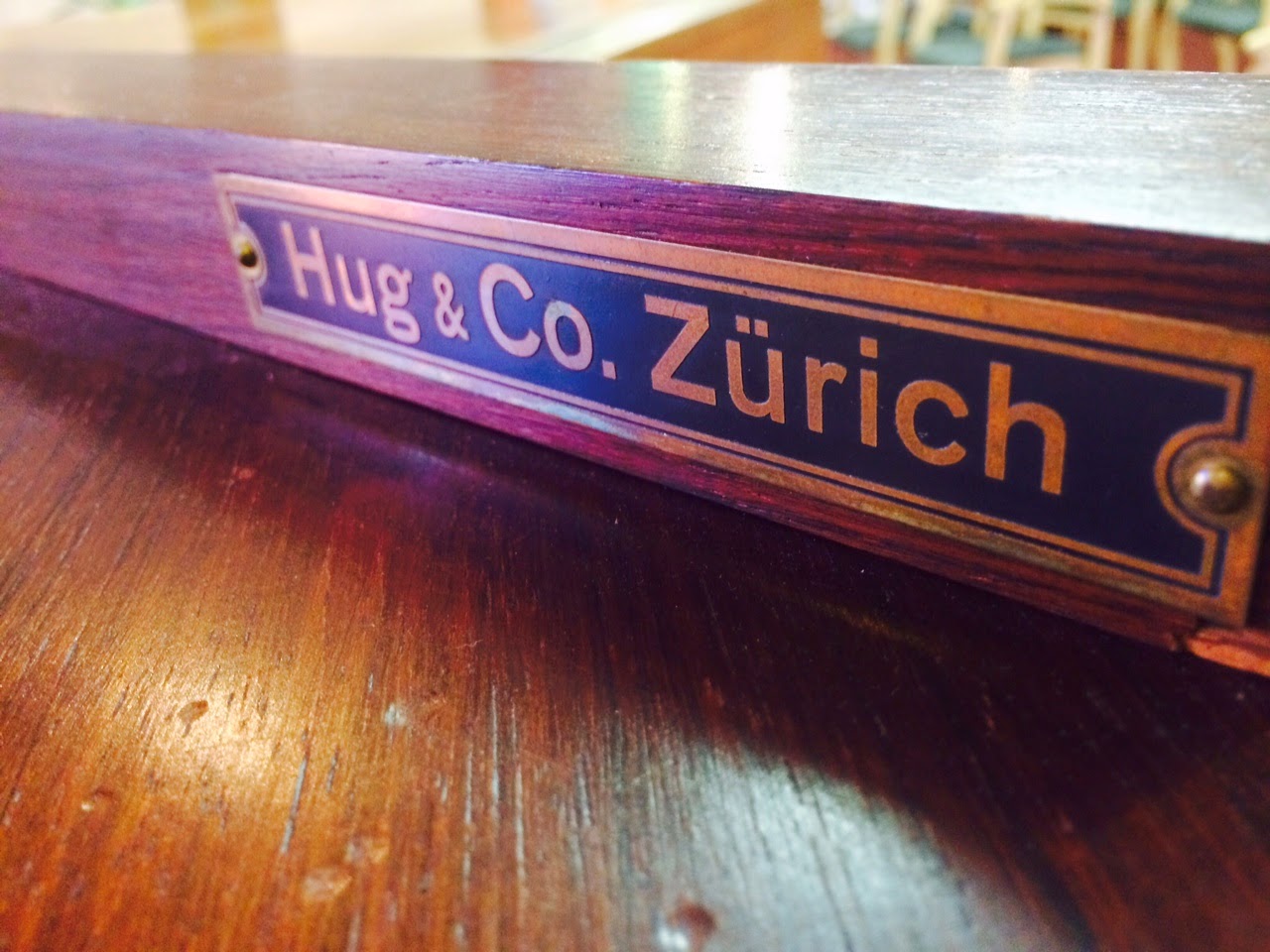 Additional distributor branding on the piano: Switzerland?! No, I refuse to relinquish my IKEA piano daydreams... 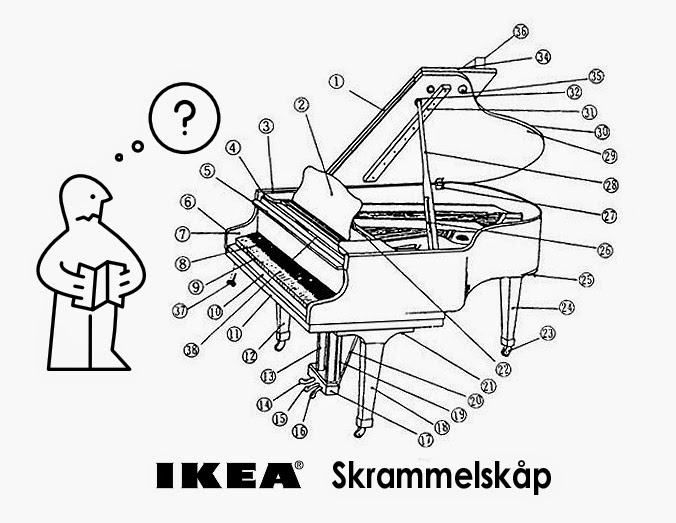 The Tribulations of Ikea Man and the Skrammelskåp ...in which we find Ikea Man still in confused, questioning repose, despite seemingly having followed the instructions to successfully assemble his IKEA piano. Oooh, he's just noticed the dampers are upside down. "Hjälp!" 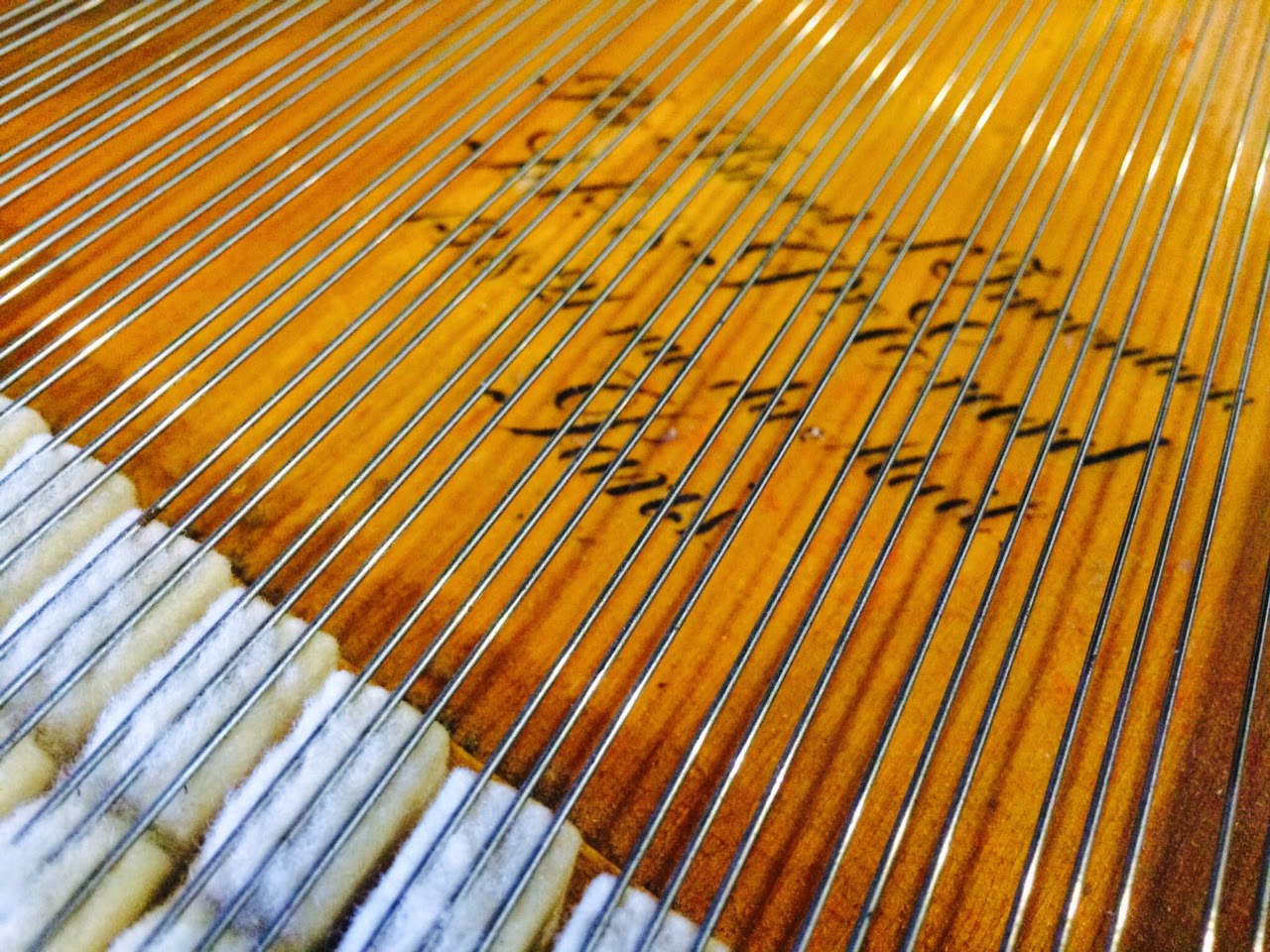 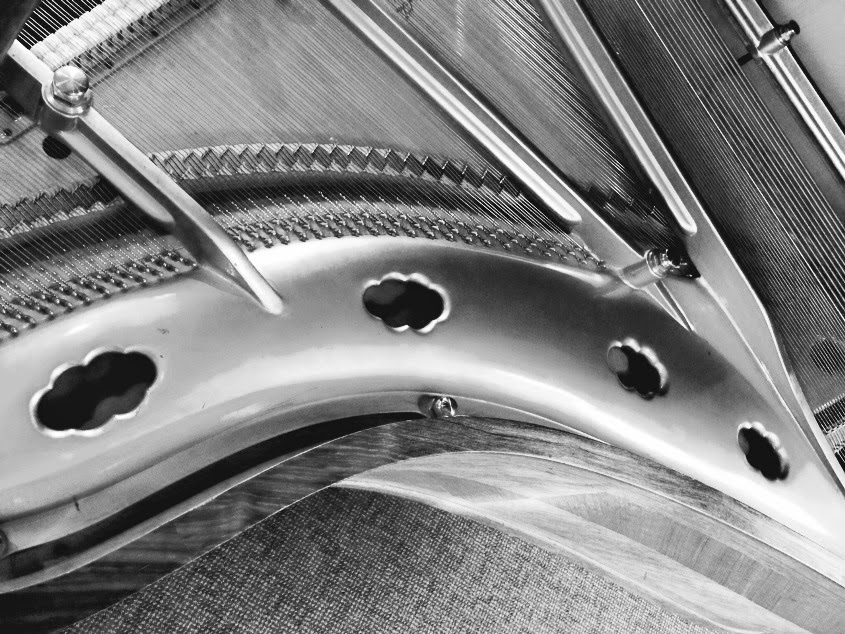