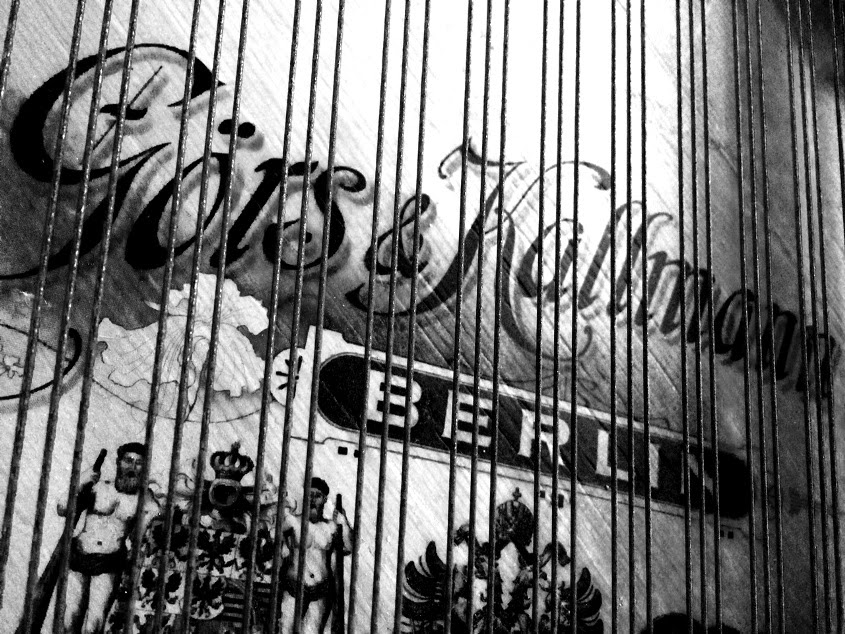 According to Shannon Lush, the best and quickest way to rid your piano strings of rust is to convert an image to monochrome then squint at it. It also helps if you block your ears and sing, 'La-la-la-I-am-not-listening-to-you'. Monochrome's effectiveness is limited to making ornate soundboard decals even more noir. Stunning, I love them. They just don't make 'em like that any more. Actually, they do - recreations of decals of almost all types are available for the purpose of piano restoration. So there is a way to commission your own bargepole-brandishing barge-arsed blokes in budgie smugglers (bottom left-hand corner, and stop saying 'bottom') should your city's crest require it. Gut, gut, er, I mean good...

...and if you think you might just slap a Steinway decal on your shed piano to gussy up your Gumtree ad, you would not be the first to try it. 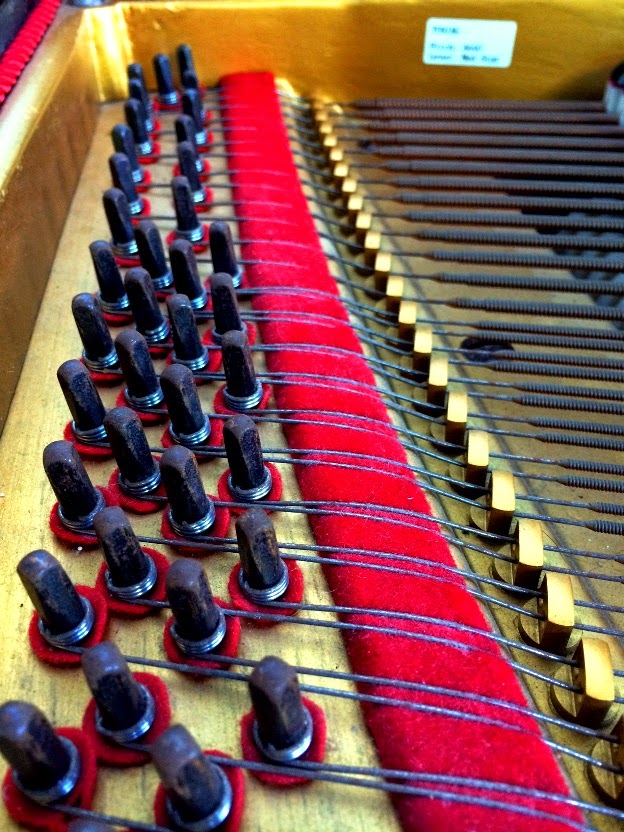 Tuning pins with little dervish skirts (cloth punchings*) are the custom in some pianos. This piano had seen a reasonably major renovation possibly ten to fifteen years ago in the UK. It's a shame to find such rusty strings and pins when it would certainly have been restrung in the reno. The exposed pin block (the dance floor) has been gilded, as have the agraffes (left) and hitch pins (at the other end of the strings). It is normally regarded as better form to mask off hitch pins and to protect or remove agraffes before the application of the traditional moon dust to gild the piano's cast iron frame.

What's that little white sticker about? 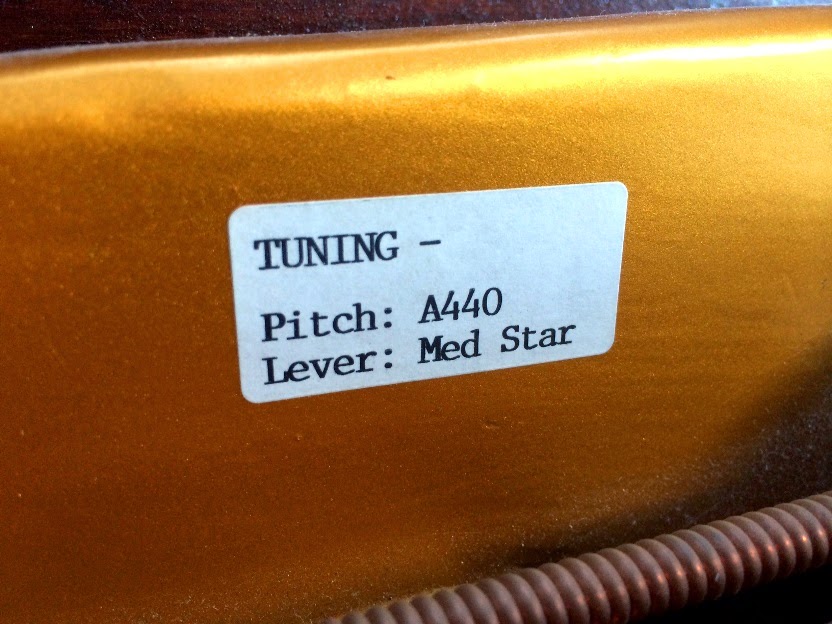 Hmmm, am I famous enough to tune this piano?

Cazzbo, I don't care what tickets (or little white stickers) you have on yourself, or how much stage time you command, you're moon-dusting the lily to call yourself a Medium Star! 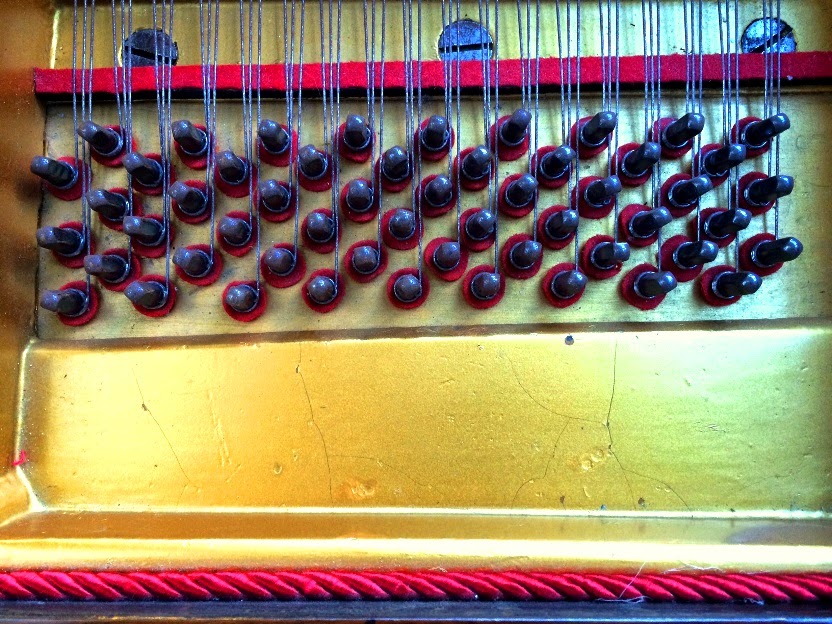 I noticed several cracks in the frame's paintwork. I don't know whether the moon dust went on too quickly, too thickly, or in too depressing a British winter. The usual adages for spraying prevail: thorough preparation and thin, even coats. I most likely would not have really paid much attention, but I'd just been assisting with gilding a frame in the piano lair so my senses were heightened. 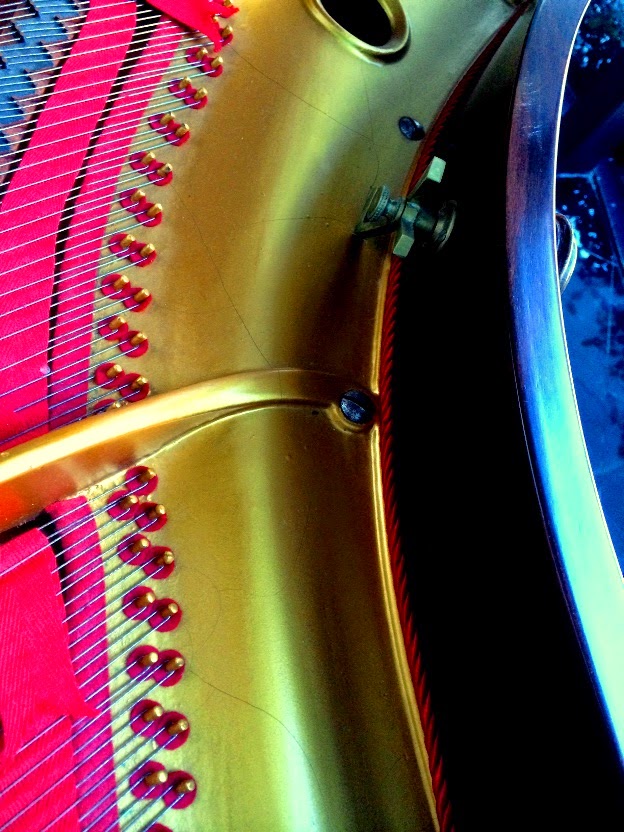 More hairline cracks. They are in the paint, not the frame itself. 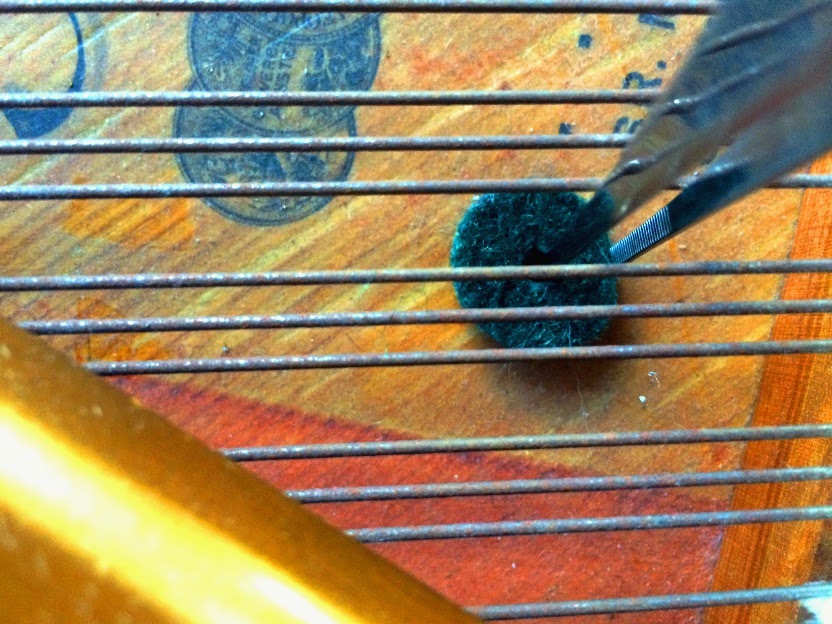 Out come the piano tweezers to rescue a hostage* from the soundboard. It's a legitimate piano part, but it doesn't belong there. 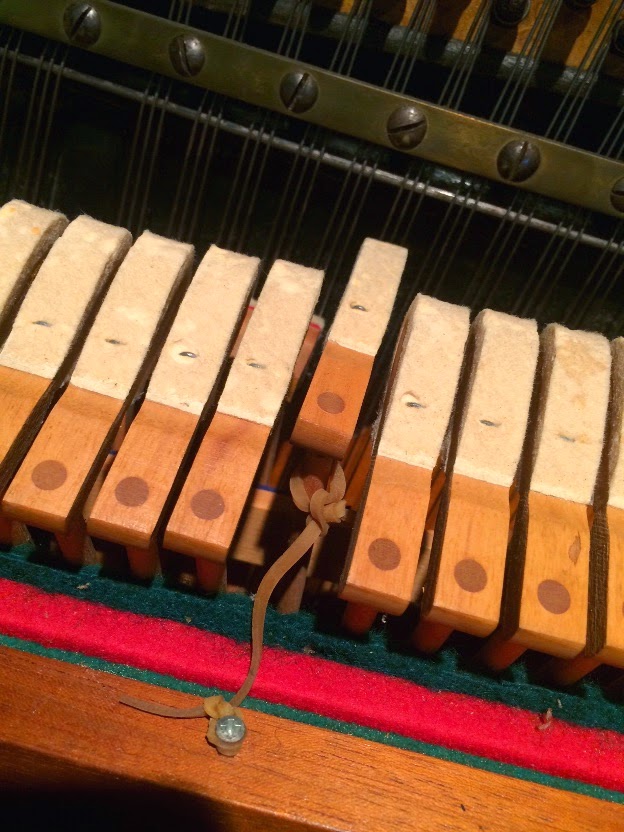 Behold - some optimistic bush mechanic strategies courtesy of the Bush Music Club, where this ageing Richard Lipp piano had kicked up its heels. Two notes that were not returning effectively after being played were given the rubber band treatment. I'm not sure how effective it had proved to be when the rubber was fresher, but they weren't even pretending to half-work now. It's time for the Caped Regulators to investigate more deeply for a diagnosis. This won't hurt a bit (it'll hurt a LOT) no, not really, madam.

Two tiny springs between the hammer butt and flange, which assist the hammer to return, were broken. The system used and the spring design were both old and odd. What to do? Hmm. Let's try modifying and customising parts by cutting and reshaping some more conventional modern butt springs (yes, that is their name) and see what happens. Conversion of an odd shape into a quite different odd shape ensued - these are not your conventional coil springs here. I have no photos, because I was too busy with my hands full as scrubs nurse and anaesthetist, assisting the piano surgeon. 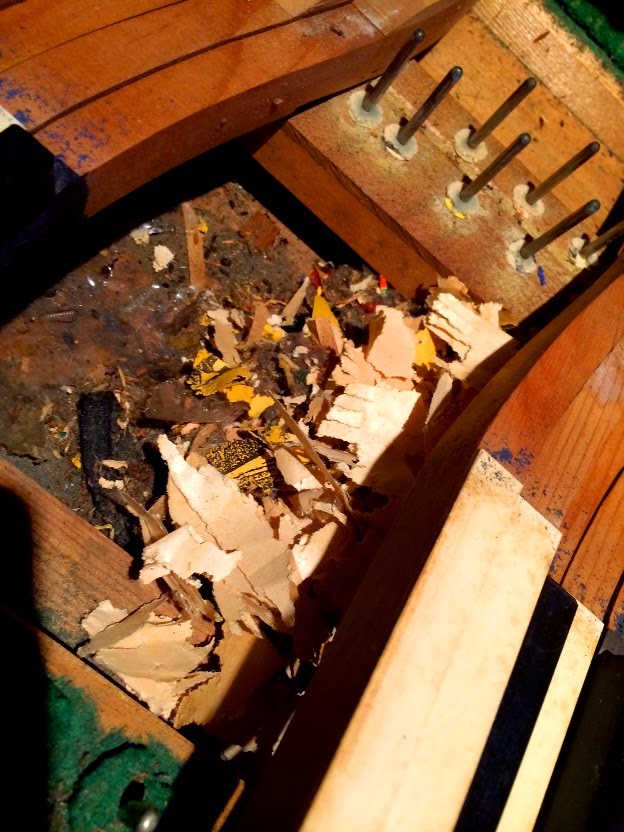 Getting the action back in was difficult because all the bridle tapes on this piano have broken. The primary function of the bridle tapes is to keep the action contained and tidy as it is removed and reinstalled. So keys were removed and then painstakingly individually tucked back under the action's wippen assemblies as the stickers** connected to the wippens were each, in turn, painstakingly individually lifted up. Clear as mud, eh?  The key removal revealed this telling sight - prime vermin real estate. 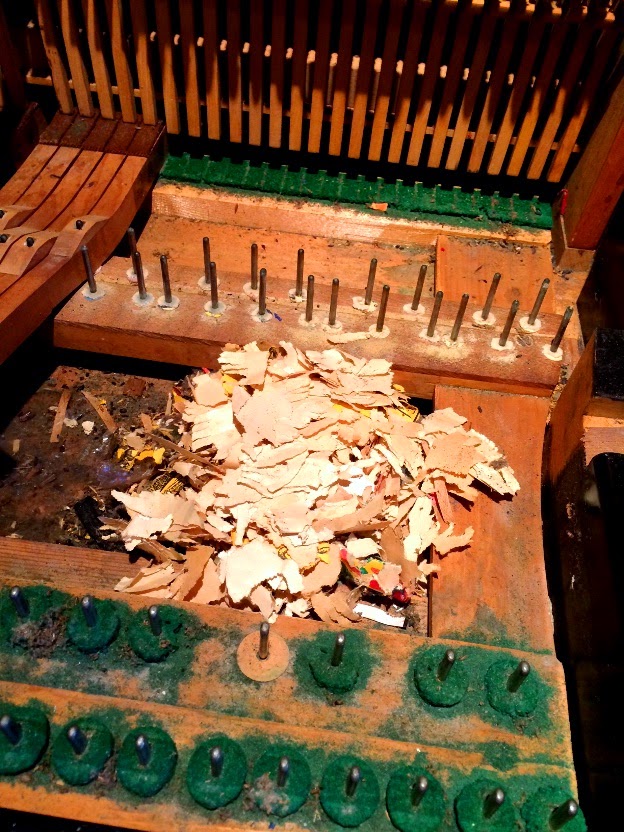 I kid you not. We removed nothing but the keys, no other rearranging has occurred. For mouse-munchings, the paper all seemed so bright and clean. My desk looks like this, because I'm trying to do my tax return. This dwelling is immaculately presented for the Open For Inspection. It might be worth more than the piano, given its prime location, close to all amenities. Nobody wanted to look any more closely than necessary, but I imagined the ready paper supply as Bush Music Club concert programmes, lyrics, sheet music, or the minutes of the last Bush Music Club meeting. Conspiracy?

The client fetched a suitably industrial vacuum cleaner and promptly sucked up a legitimate piano part* before I could hint at where not to suck. Note the missing cloth punching* (washer) in the centre. Oops. I promptly fetched a spiffy new replacement from my kit, and the Hoovering was now focused exclusively on razing Mouse Mansion. Degradation of the cloth and paper punchings under the keys is clearly evident, but dealing with that is not on today's agenda. 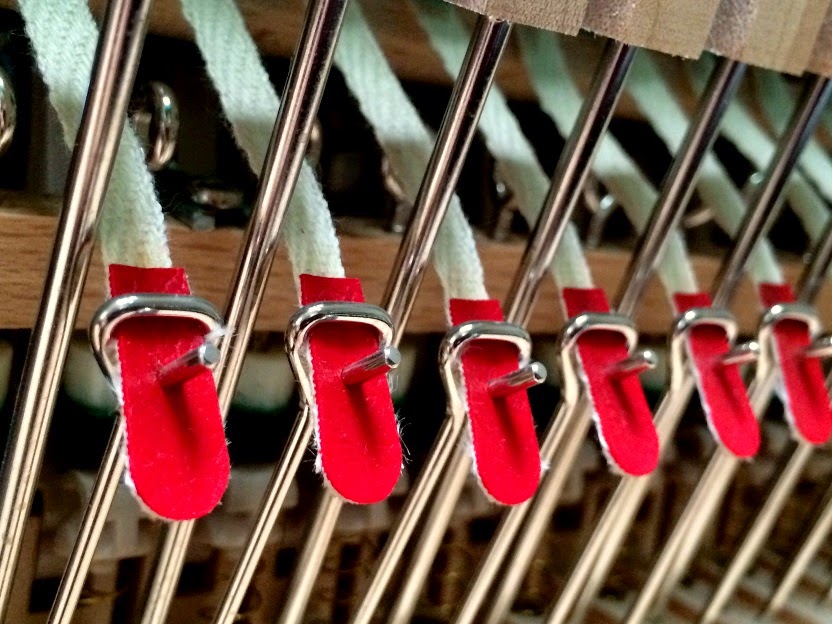 Respectable bridle tapes in a much younger piano. 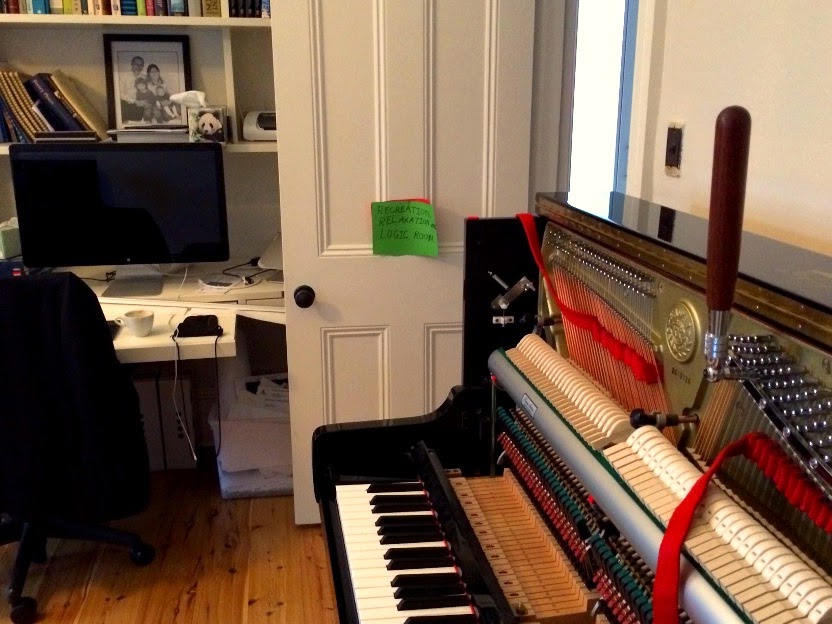 An exemplary client contacted me on the calendar dot, to shore up a six-monthly follow-up tuning to get her relatively new piano squarely on track for stable pitch and reliable musical service. Note that green sign on the door. 'Recreation, Relaxation and Logic Room'. I was charmed by the kids' imagination (which the churlish may sometimes feel is being potentially nuked, with daydreaming definitely devalued). I happily contemplated the whimsy of it as I tuned. Yes, I can daydream and tune. Aural tuning is one of most intensely focused yet strangely, in some ways, almost meditative things that one can do. I digress, where was I? Oh, that's right the Recreation, Relaxation and Logic Room. 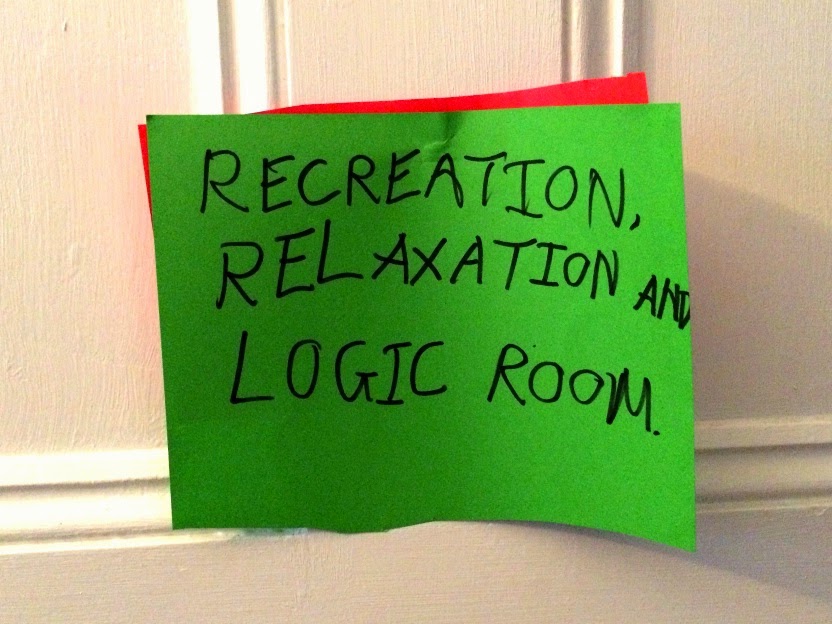 That's the room for me... or is it? Yes, yes, it is. I later learned that the sign was part of an elaborate game the kids were playing (prescribed or not, I do not know). I noted the kids' bedroom was the 'Main Room'. Tidy your headquarters, Mr President. 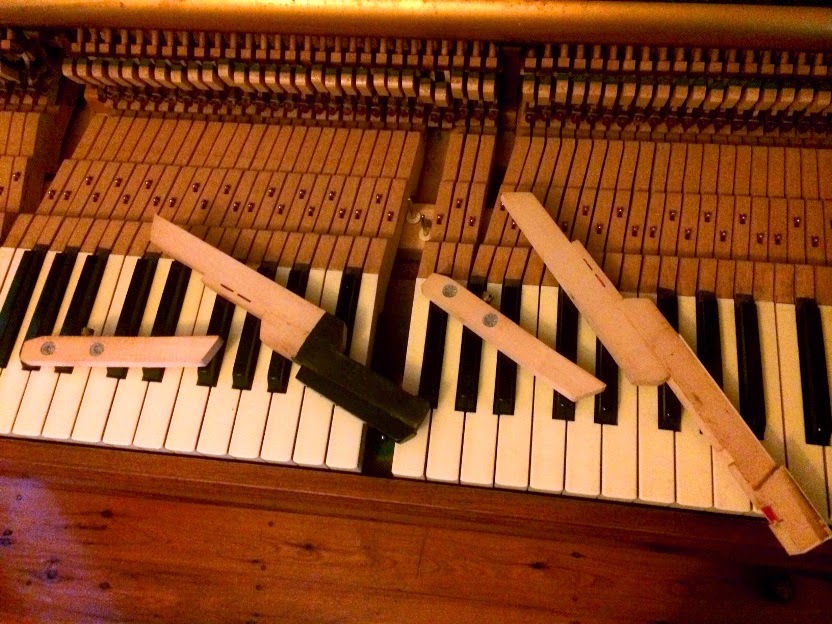 Dedicated readers will recall the broken triple keys requiring glueing, splinting, nursing carefully in situ - and a client sworn off exploring fortissimi after musically divining another glue-fest. I've daydreamed an improved method by which all the keys could be repaired more permanently (and no, I don't mean by dragging the piano to the kerbside chuck-out) - but the client is not yet motivated to invest in a neighbour's loaned former shed piano... quite reasonable. 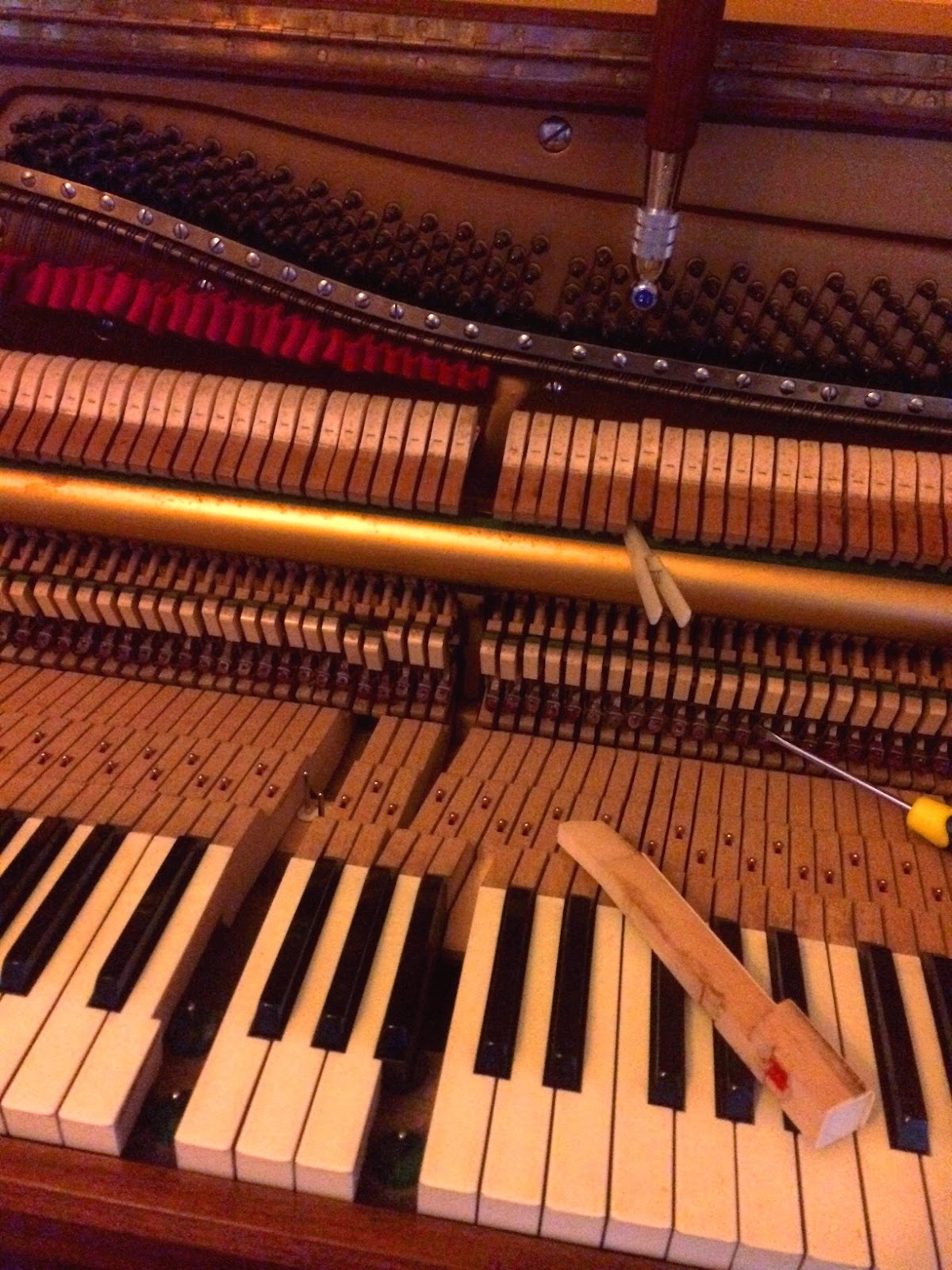 Here's a key that went at the front join in the act of playing it as I tuned. Never mind, I'm already repairing several others. Even now, more must be on the verge (and by that I do not mean the kerbside chuck-out). Cats... who are really still kittens. Cats! I promised you kittens on the keys, because I am firmly of the belief that the internet does not have enough cats... 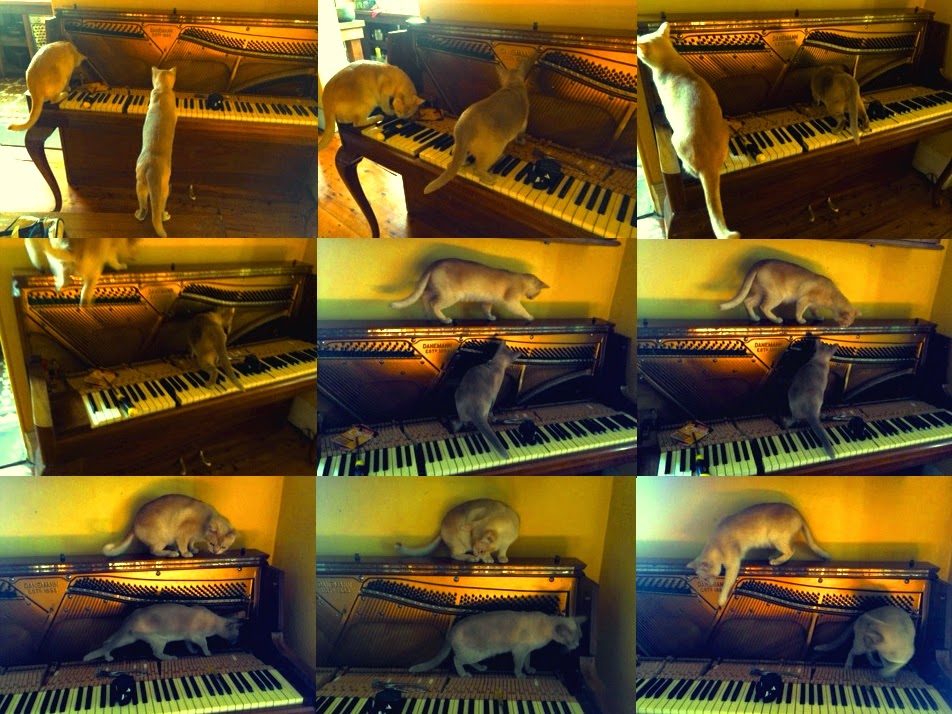 Here they are, investigating arguably inappropriately, but whaddayagunna do? Keep repairing keys so that I can get the action back in and the piano closed up and safe, eh? 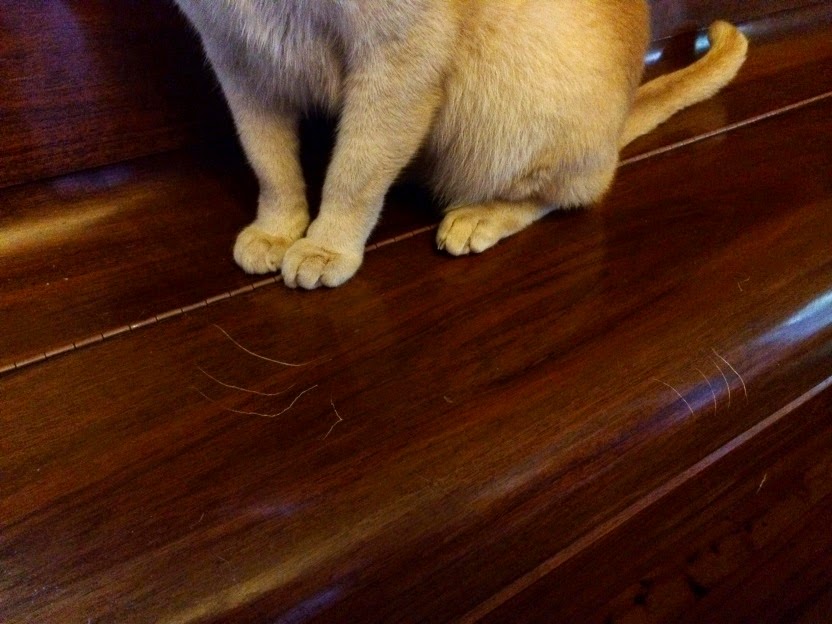 Finally the piano is (in theory) protected. Then brief and immediate agreement that, no, those scratches on the fallboard were not already there. Hmm, a clear case of claws and effect, madam.

* Punchings are cloth washers, woven with a multi-layered structure. The adjustment of key height and key depth (how far down a key travels when it is played) is influenced by these cloth punchings. The adjustment and regulation of key height and depth is further refined with cardboard and paper punchings of various thicknesses. Punchings - the term is indicative of how they are made.

Speaking of punchings: I will punch the next person who indiscriminately uses the terms 'cloth' and 'felt' with regard to pianos, where they have distinctly different characteristics and functions.

OK then, I won't punch clients or the general public, perhaps just other piano technicians, who should know better and use their language more carefully. Hmm.

** We learned about stickers here. They are pieces sometimes found extending between the rear of the key levers and the bottom of the piano action, in taller pianos.