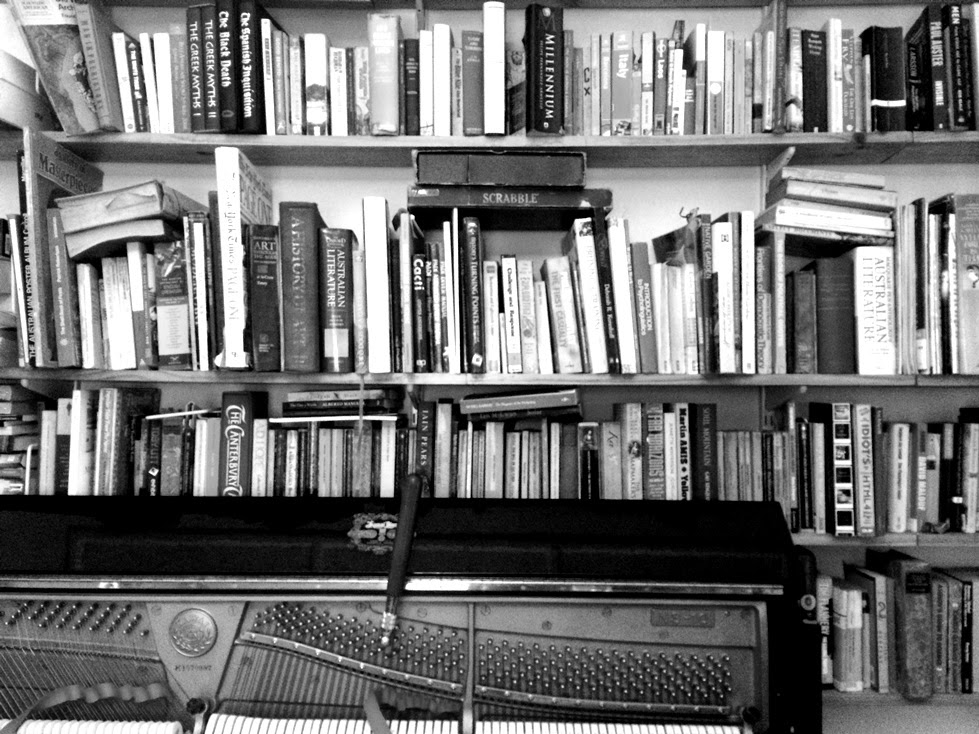 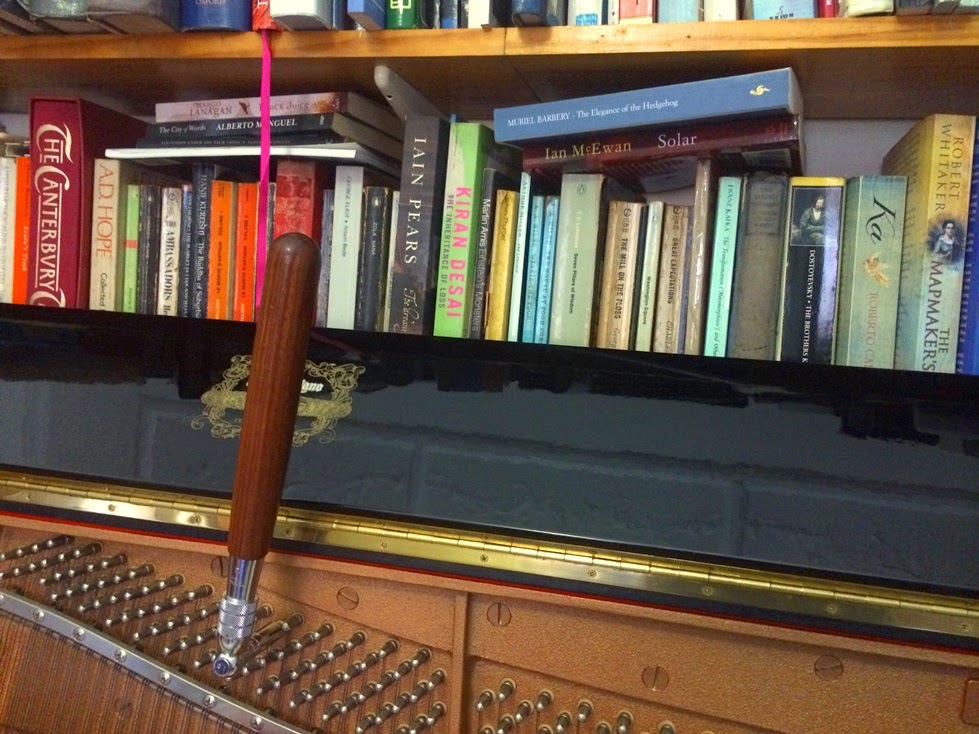 I can't help fixating on the various book spines as I tune. 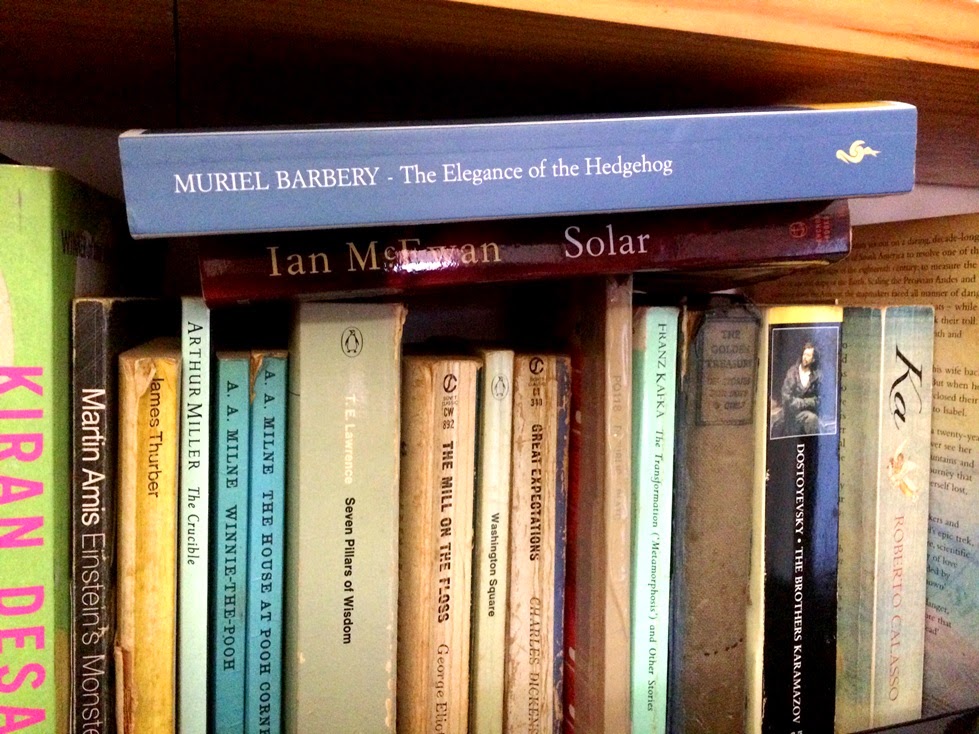 The Elegance of the Hedgehog intrigued. The title implies a Womblesque novel, but I wished for it to be Attenborough-style accessible science. 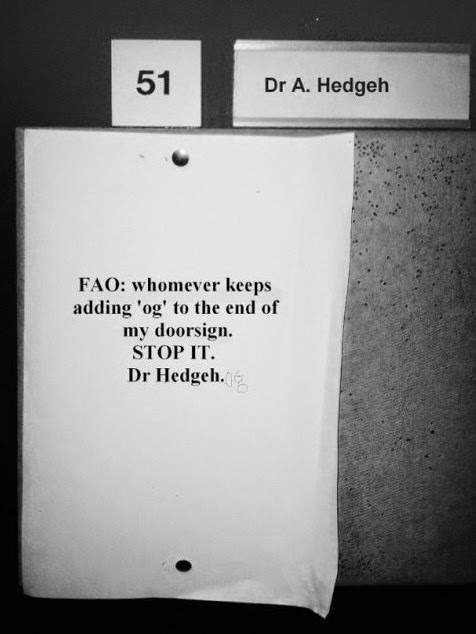 These memes were, for a time, able to elicit literal LOLs from me at any time of the day or night. I don't know how Dr Hedgeh's fury pierced my usual stoic control, but it did. 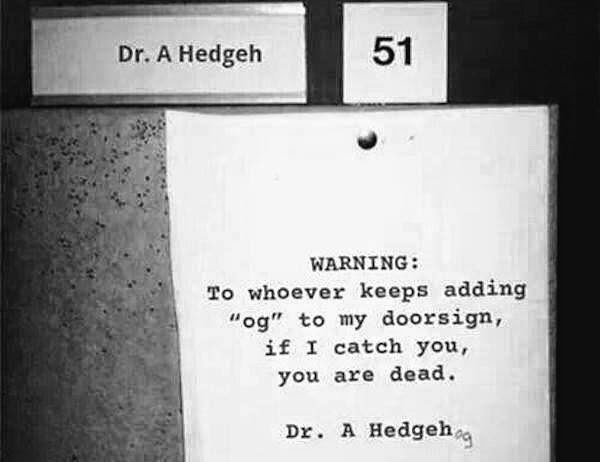 I've since recovered, but I love the notion of Dr Hedgeh's battle, surely pursued at Body Corporate level. 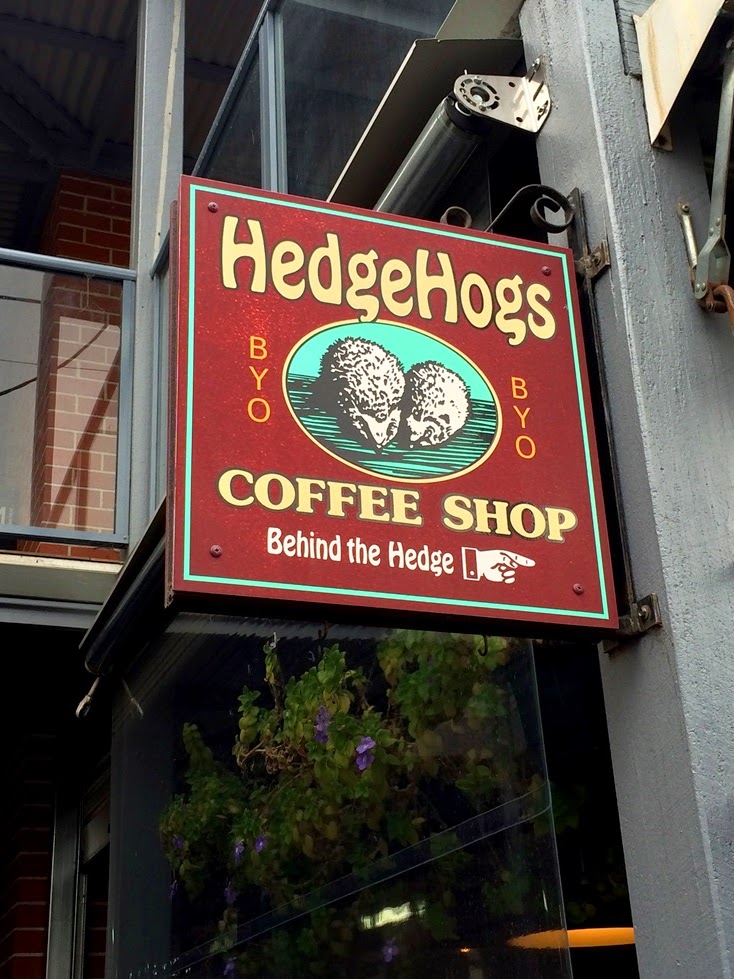 Perhaps it all became too much and the dear doctor has opened an elegant coffee shop in the quaint town of Berry. 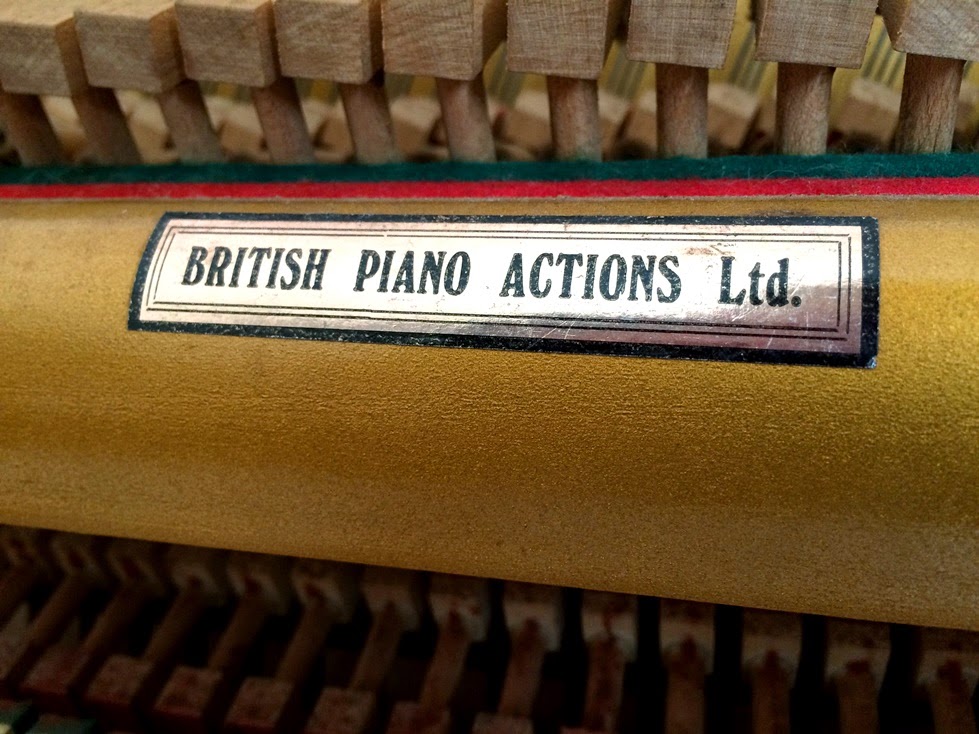 A Pommy piano with stiff upper somethings and Union Jack stop felts. OK, that's one for the piano technicians. The jack is a piano part, the jack stop felt is a small square of felt that enables the jack to come to rest silently. Whew, tough room! 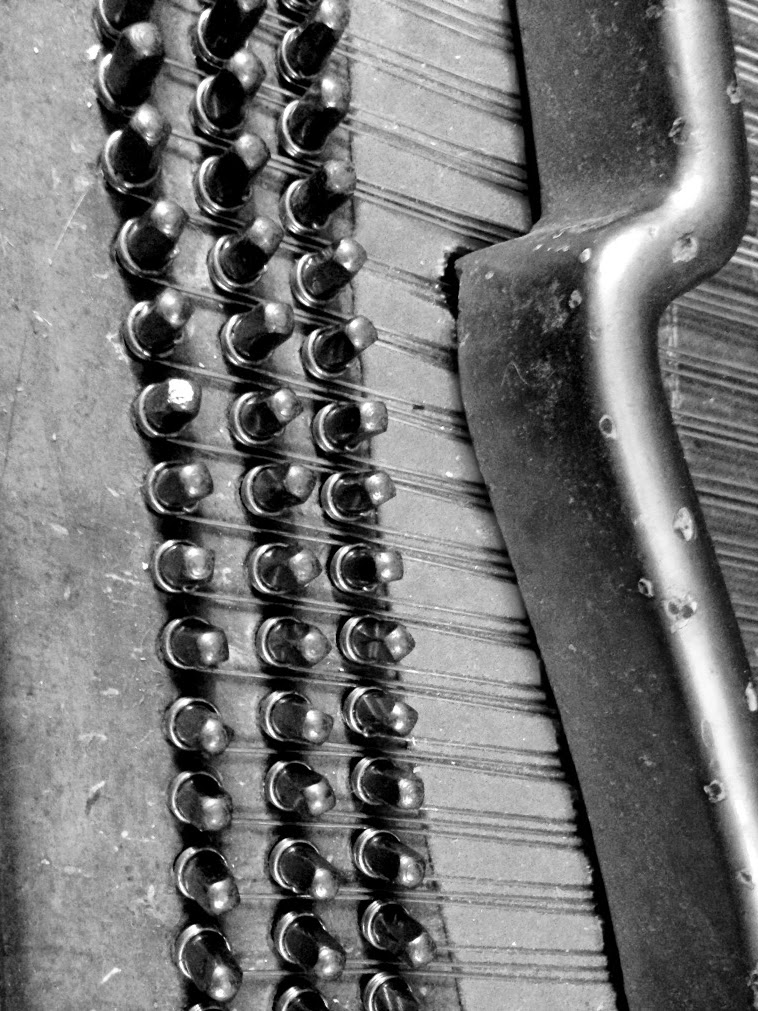 I've tuned this Kaps piano before. It features a (presumably gimmicky) extra resonator box colloquially known as a 'cigar box'. The client has removed the part that fits over the strings, but still has the bits in a cupboard somewhere. This piano's most immediate problem is that the tuning pins have become quite loose, bordering on lacking the necessary torque to hold the strings reliably at pitch. There are options to squeeze a bit more life out of the poor old dear, and my passionate suggestions will be heeded. Observing the Kaps piano's tuning pin layout, one can see that the design is inherently weaker than that of pin layouts that tend more towards alternating, or staggered, pin groups. 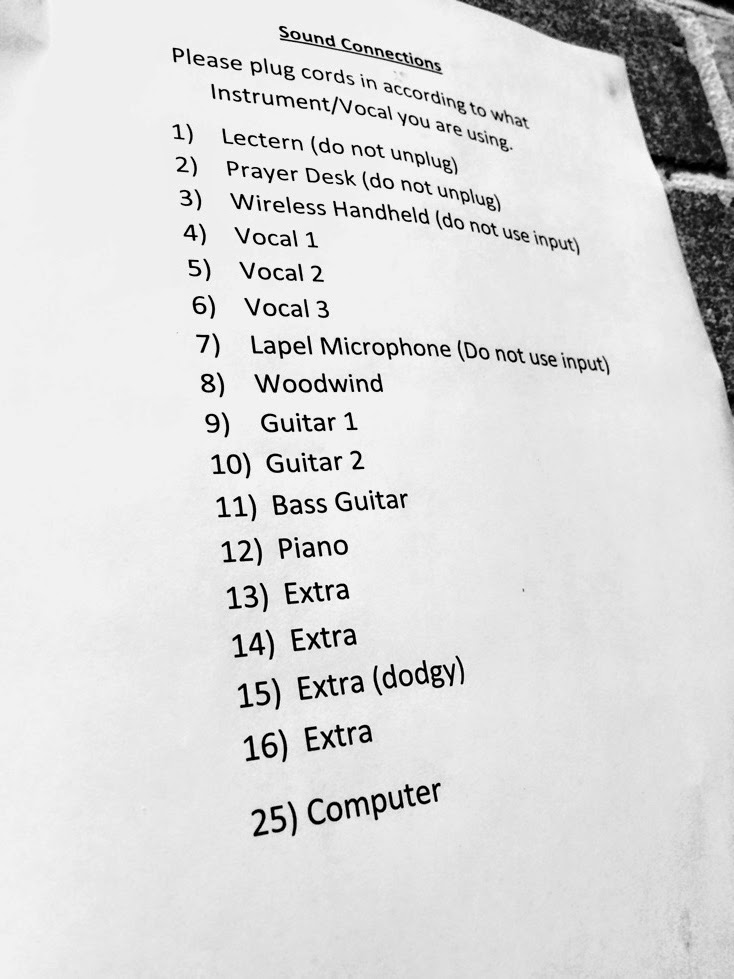 It is the Australian-ness of 'dodgy' for channel output 15 that appeals in this no-nonsense church PA list. There is no more apt, yet colloquial, description. 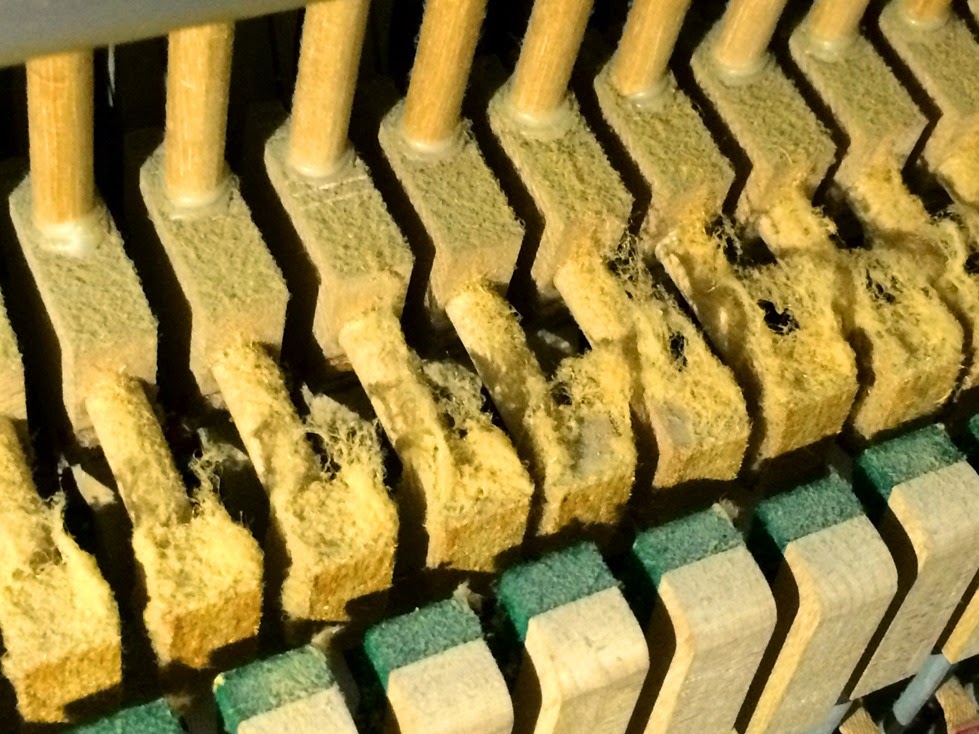 Has this piano been eating Cheezels? There is no way to know. Strange chemical reactions inside the enclosed space of an upright's interior can occasionally result in growths that are not exactly mould, nor specifically the degradation materials, but some odd combination of the two. The catchers (protruding from the hammer butts) each have a kid leather piece glued to the wood. Climate and neglect sees these kids hitting puberty. See my YouTube clip The Amazing Bearded Piano for a similarly-afflicted instrument. The wonderful folk at the Inner West Music College are better at marketing me than I am! This froggy fiddler has since revolutionised his playing posture, and so can you! 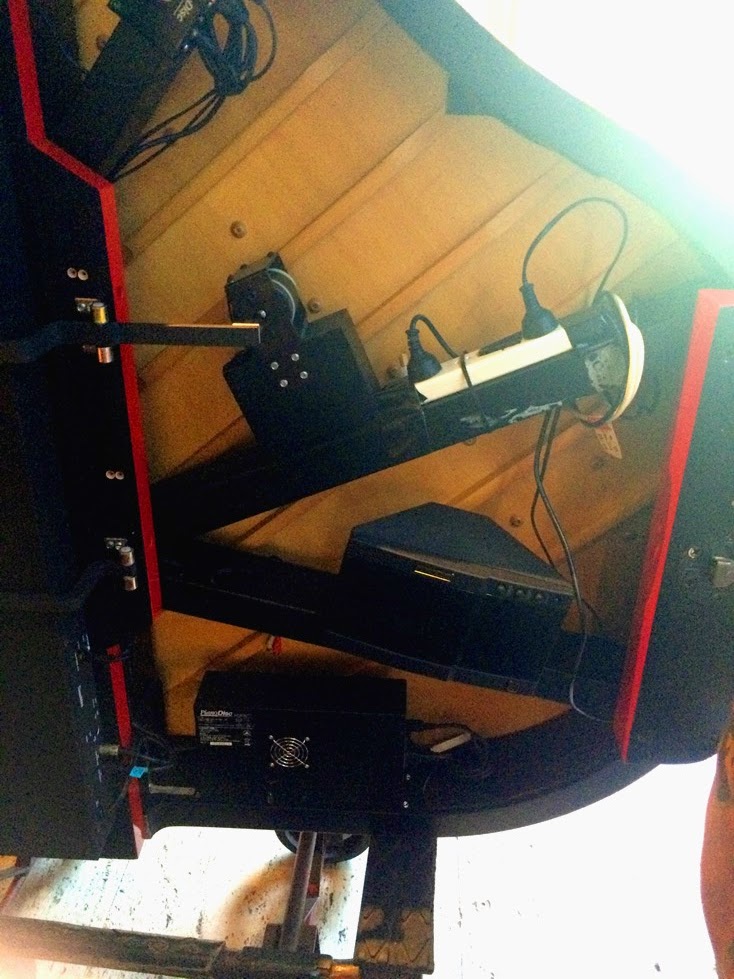 I do see a few piano bombs by which I mean, in part, clapped out pianos. This is actually a Piano Disc system (electronic player mechanism). I would not have fancied trying to get this piano into Brisbane during the recent G20. 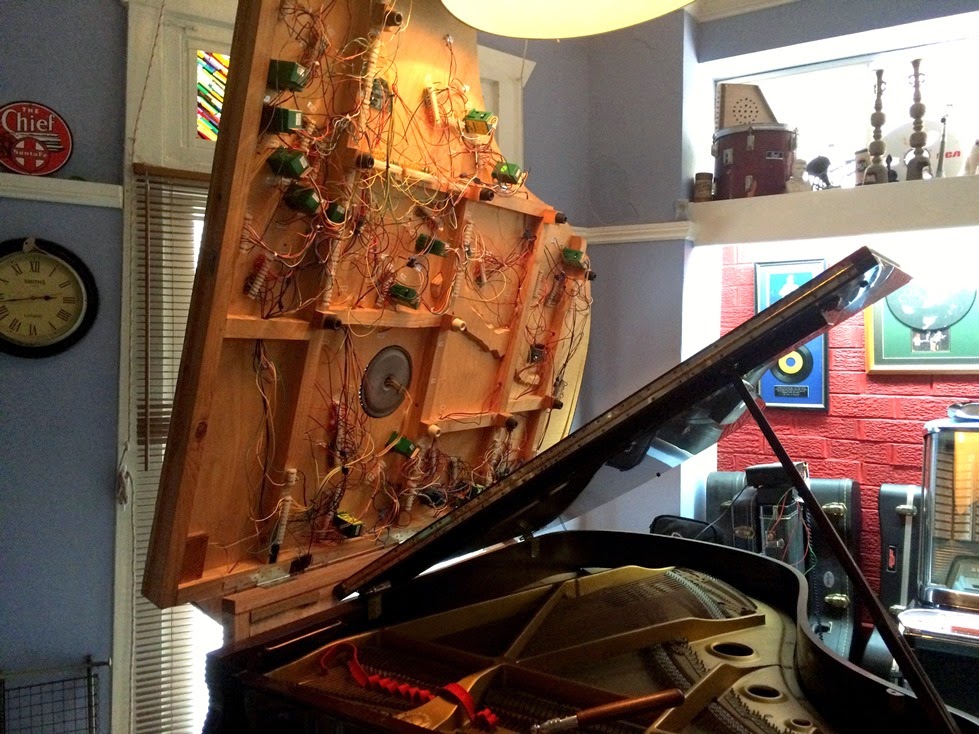 Another piano bomb - this is the most elaborate I've seen. 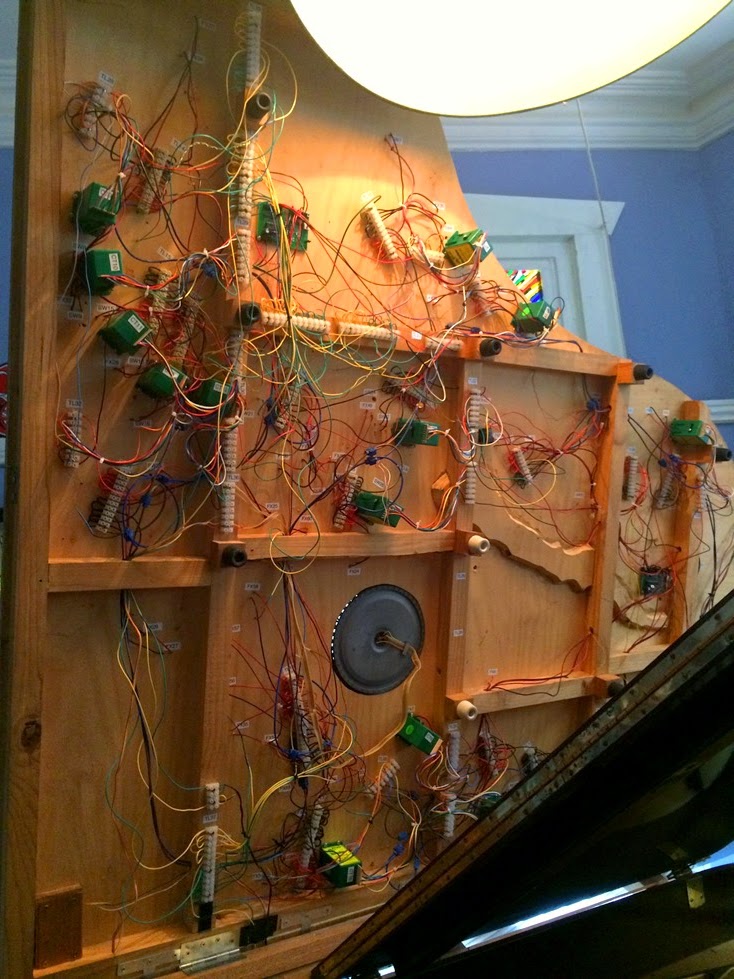 I'm glad the client had prepared for me to have access to the parts of the piano I need to reach. 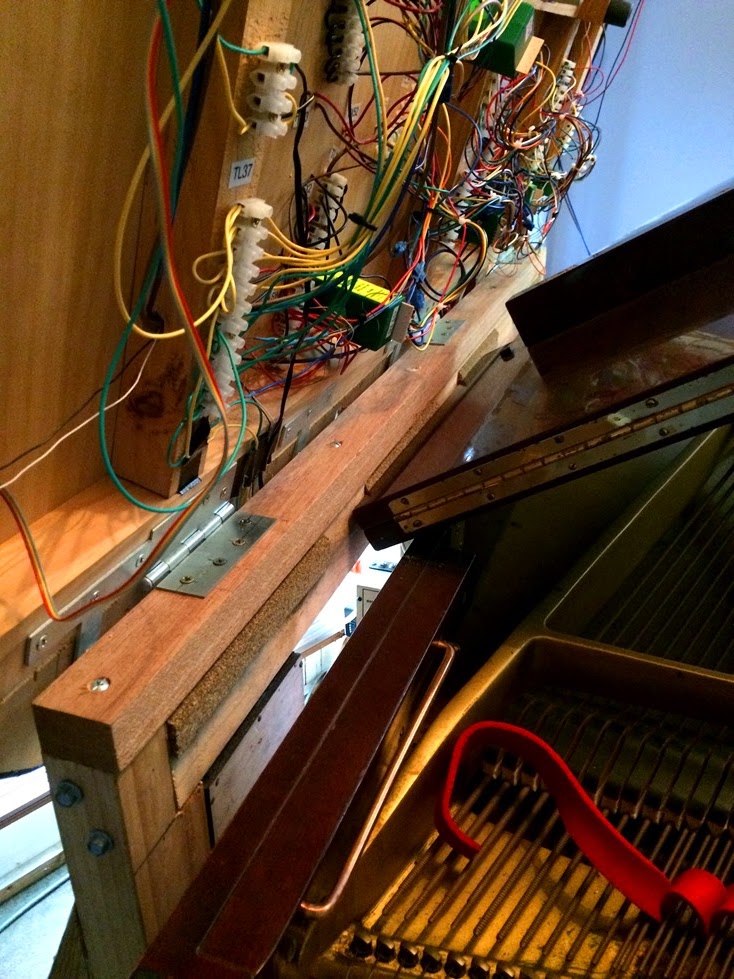 It was no doddle for the client to use his rope and pulleys to lift the mysterious augmentation a little higher so that I could open the small lid on the piano before placing the whole lid on the long prop stick for tuning access. Such pained careful movement past all those wires, like the suspenseful parts of those action movies where bombs always have large easy-to-read countdown displays. 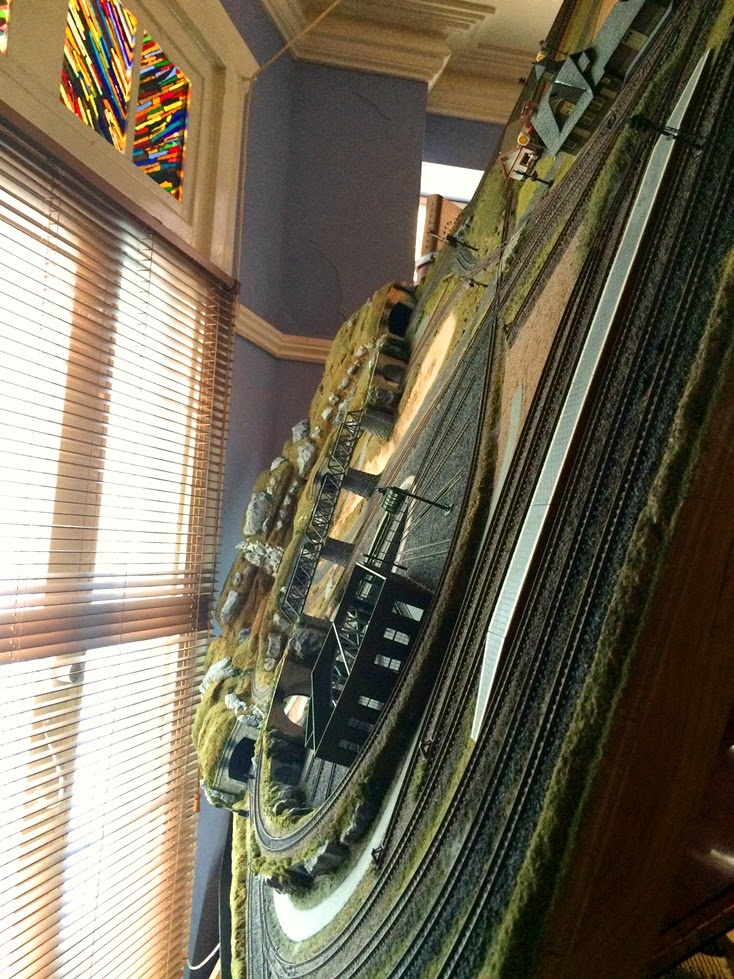 I had to sneak a peek! 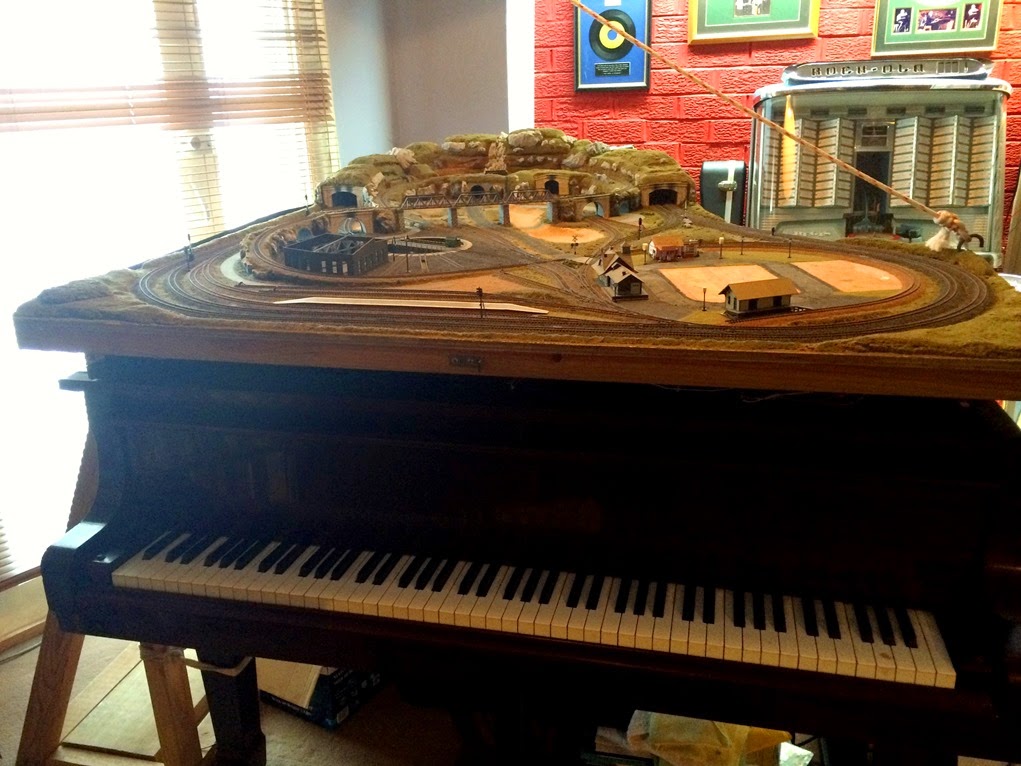 Rarely can one be so literal, "I need closure!" 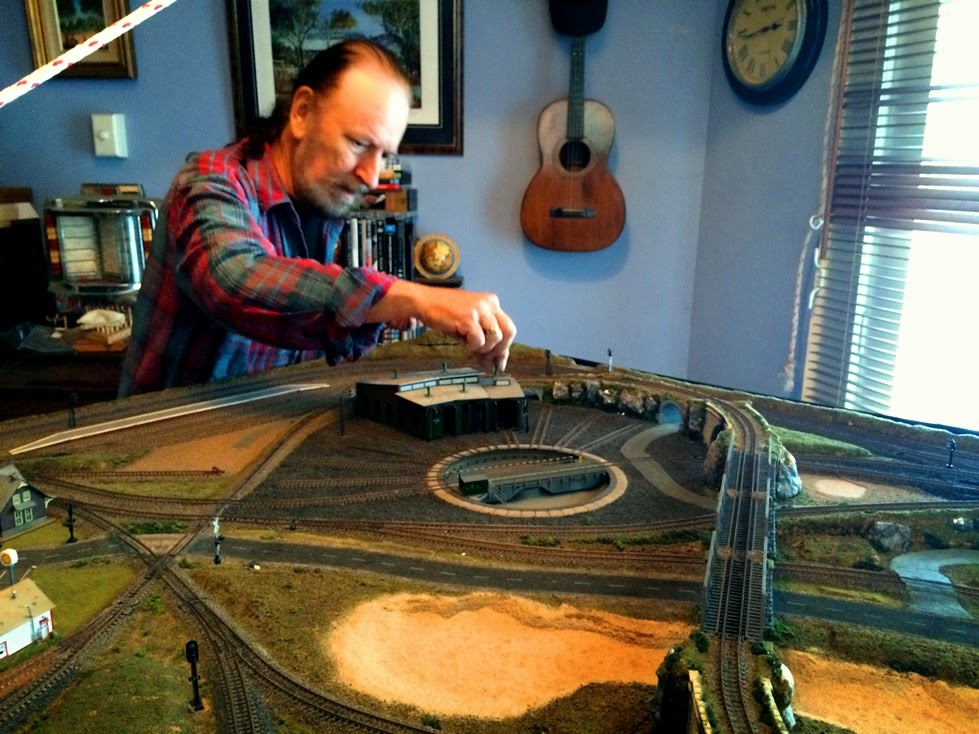 I'm rewarded. The client installs tiny rooftops and powers up the lights. The feature in the foreground will be a lake, emanating from a waterfall. It will be made from clear resin. There are more development opportunities that will maximise the benefits of the existing infrastructure. 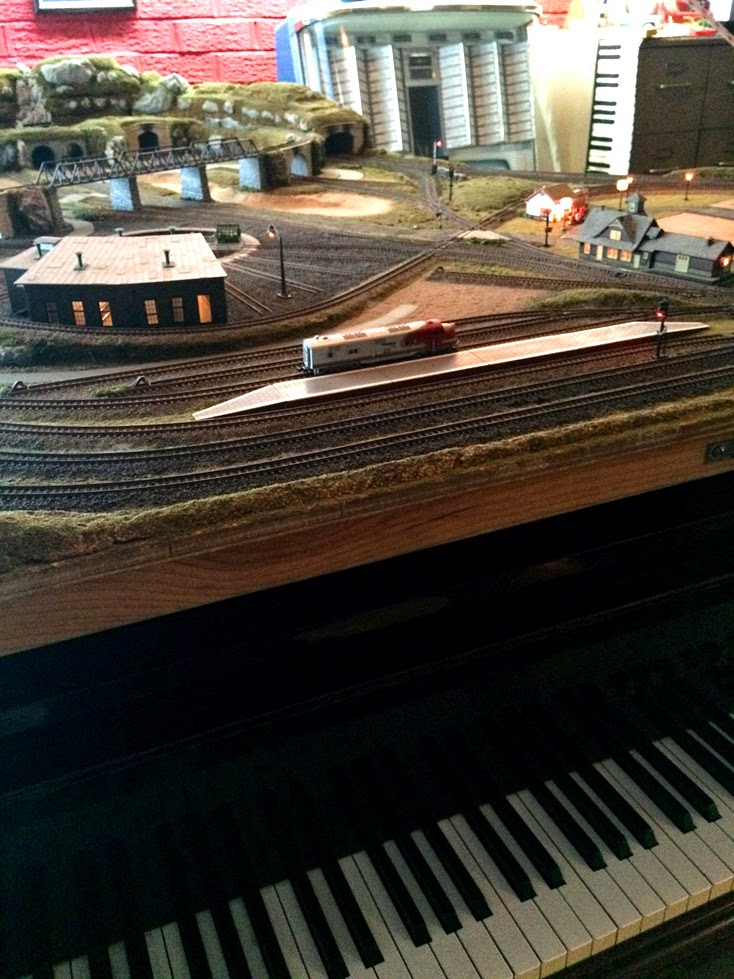 An example of the rolling stock is is placed on the rails and I'm guided through planned construction, presumably all on track. The piano, formerly from a recording studio, sounded darn bright to me as I tuned, but once everything was closed up, it was quite reasonable for the style of playing it receives.

This white Yamaha G2 piano (below) visited the Caped Regulators' workshop for a considerable spruce-up and the second full restring in its lifetime. Much cleaning and other work is an inevitable part of this job.  Compressed air is judiciously used to remove dust from the action. A repair to part of the pin block meant that the cast iron frame was also hoisted out of the piano. After seeing some grubby 'before' photos during the workshop activity, the client's desire to protect the piano was reinvigorated. I had a suggestion... 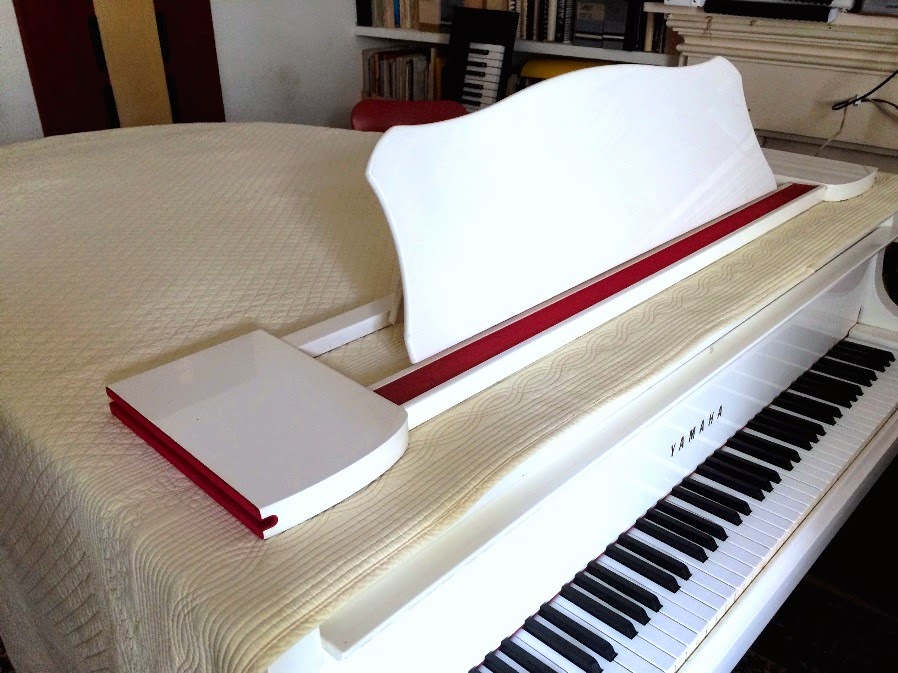 When I arrived to tune this piano, I found that the kind house-sitting guests had dressed the piano for protection, and because they enjoyed the pleasing aesthetic of the stitching on that quilt.

I used to think this was a good way to protect the piano. I used to sometimes recommend it, especially after having cleaned some pianos innards that were hideously dirty. Music teachers often do the fully-closed lid thing, usually with piles of music books and other shit perpetually on the piano. To have the 'little' lid closed does keep the dust and dirt out, there's no doubt about it.

But the significant downside is that it makes the piano sound very quiet and dull, so folk play to get the sort of sound they might expect from the piano with big lid closed but little lid opened (and music rest up in the normal manner). They play louder and harder. The result is much quicker wear on action components, especially hammers. 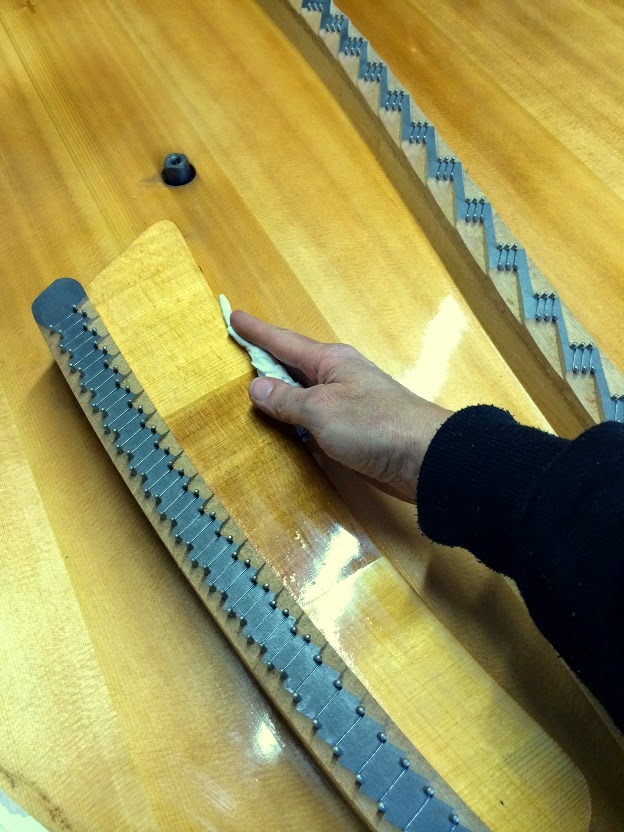 The white piano in the workshop. Only during restringing is one granted such access to the piano's soundboard to give it a thorough careful clean. 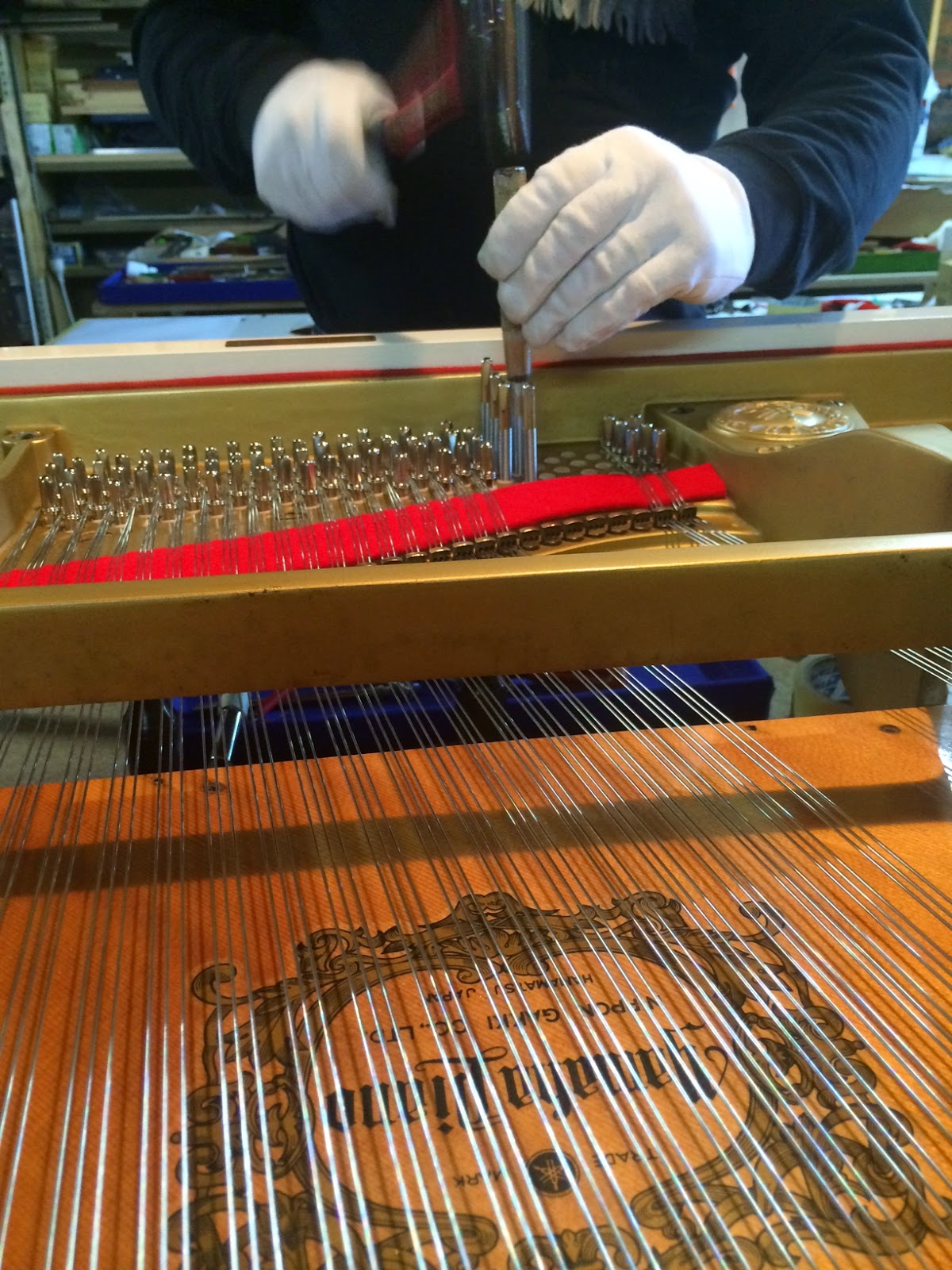 Beautiful new strings and pins, the view from my wicket keeper position. 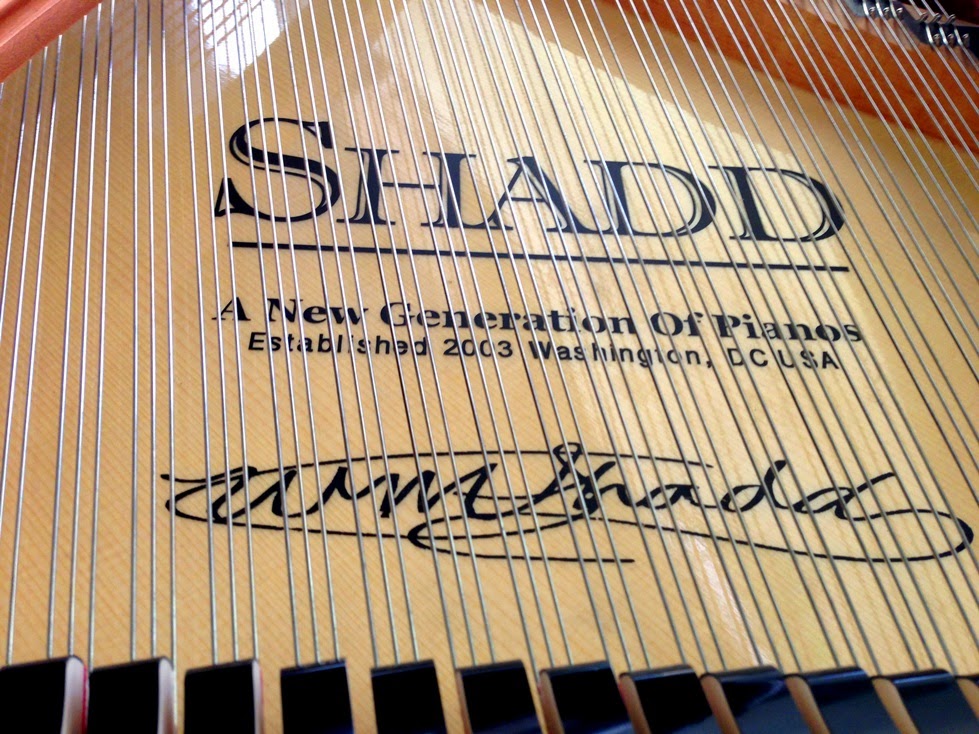 Sometimes shiny soundboards smell of snake oil. No snakes were harmed in the formulation of that inference. It is legitimate re-labelling, but perhaps not quite the revolution trumpeted. My internal mirth: If this is the grand (and it is) I can't wait for the upright model: Shaddup!

Pianos: Painos (not a typo)