This blog entry may contain traces of nuts. An ivory-tickling-themed detail on the façade of the Famous Spiegeltent snapped after an event hire piano tuning for the Sydney Festival in the oppressively humid environment under the big top. I've been on that stage in various guises as a performer, and now to tweak 200-odd piano strings. I've previously noted, 'Where would you find a lady playing the sousaphone both on and in the venue?' 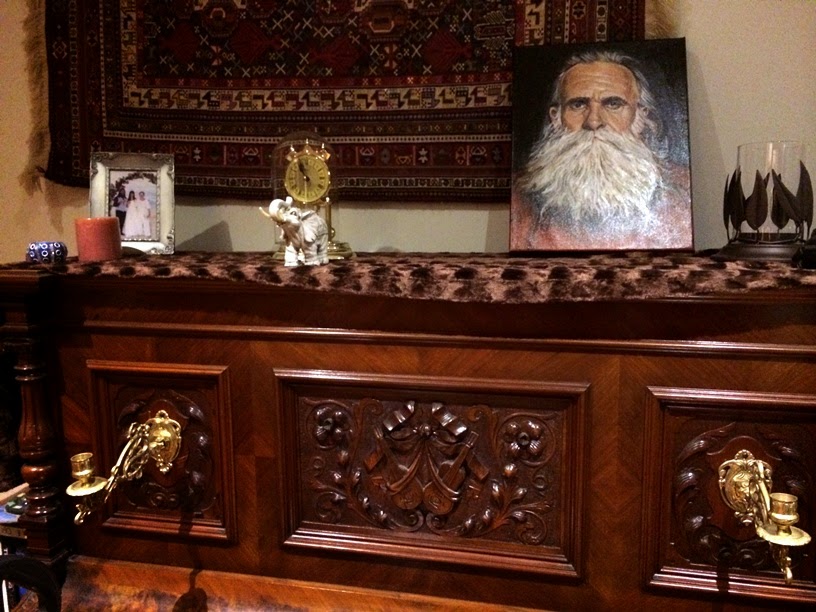 Friends' ornate piano, it's quite beautiful. I was on performance (and partying) duties and not required to polish the candelabra nor the tuning. The candelabra were sparkling, so that bit of housework seems to have been taken care of.

Piano part suppliers actually stock candelabra, so if you sense that your piano's 'look' would be enhanced (or completed) by such adornments, it can be made to happen. But check first that the piano's innards are not bordering on irredeemable (get a technician to have a looky-feely 'under the hood'). A brilliant portrait of the esteemed guest of honour atop the goanna saw me reach for an iThing. 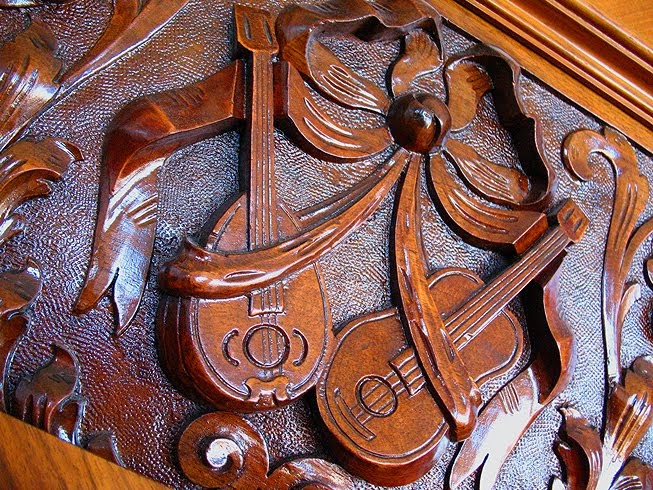 It's not the first time I've spied sundry strummers adorning a carved piano cabinet. Trade four or eight strings for the 220-odd inside, eh? I'll trade lute for loot... possibly. 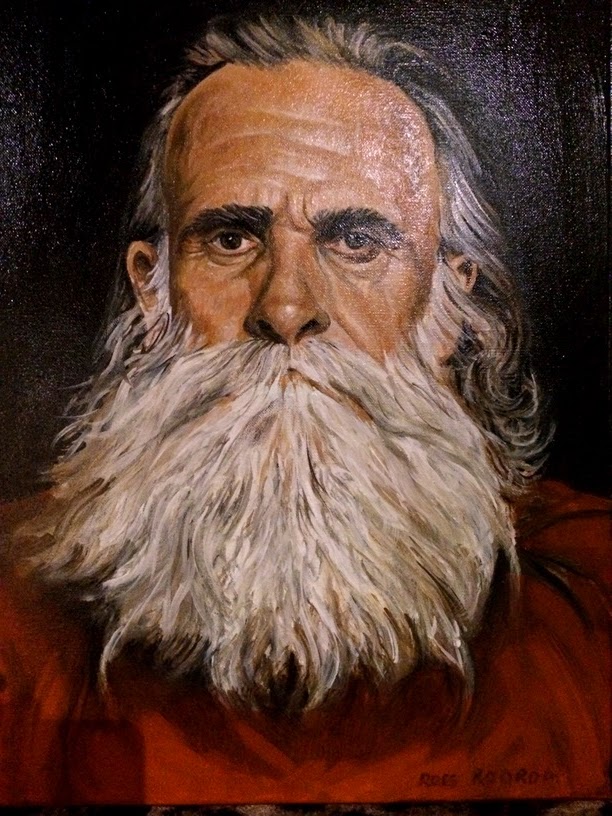 Bloody bottler! No one can say, 'he's no oil painting', here's the evidence. 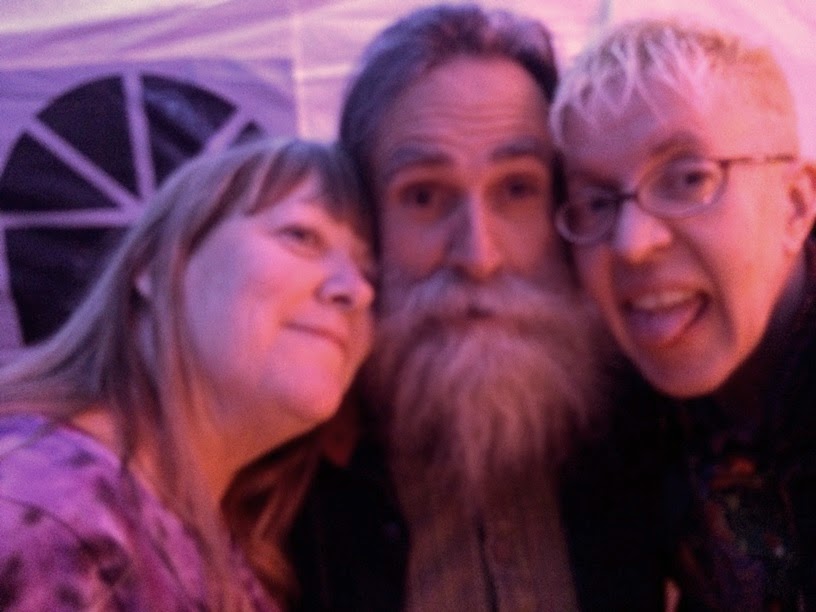 And in the flesh: the wonderful Peter Carroll, flanked by irrepressible partner Tracey and your dedicated blogster. 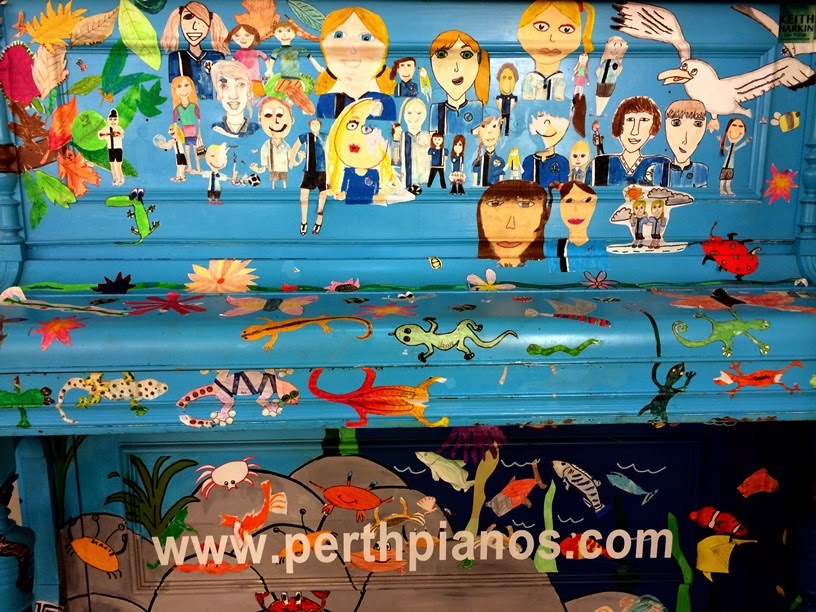 Piano as canvas. This street piano had come indoors to shelter in a theatre dressing room (in Perth). It had been decorated with contributions from a primary school's Year 2 classes. I can't believe I didn't mention it in the relevant tour tales.

Art and toy pianos around a piano. A dear friend and colleague has the delightful compulsion to acquire the quirky of specific ilks and eras. I don't know quite where the line is drawn, but they all double as theatre props, so there's a lovely logic. 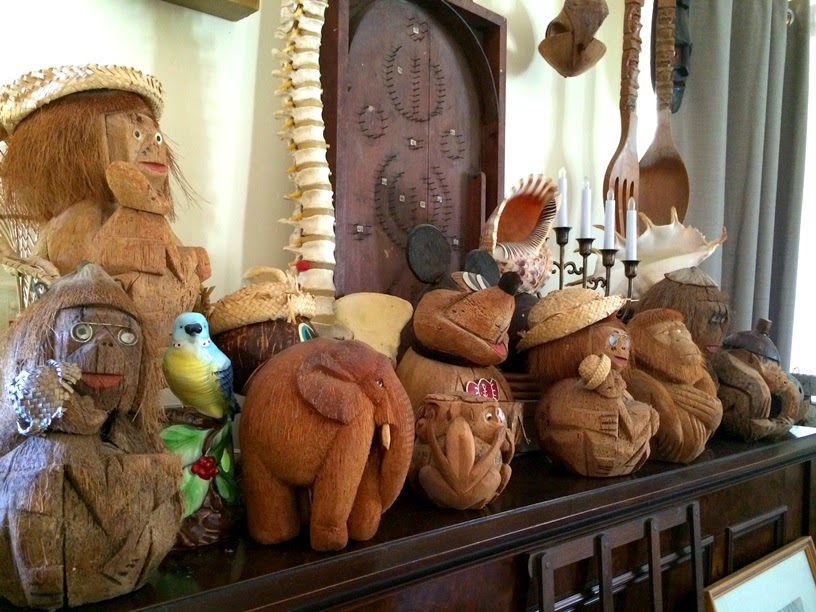 No coconut elephants were harmed in the contemplation of this piano. Captivating though they are, such displays are the bane of technicians' lives when requiring removal for access. We don't mind removing things, within reason, but it can certainly expedite the affair if the top of the piano is cleared beforehand. Around it too, sometimes. And would it kill you to do the dishes? Just kidding.

We piano technicians reserve the right to put things back, or not, as time (and the items' fussy fragility) permits. As Queen of Coconut Pianos I hereby authoritatively speak on behalf of all fellow trinket taming techs. Some have formal policies on this topic. I don't. 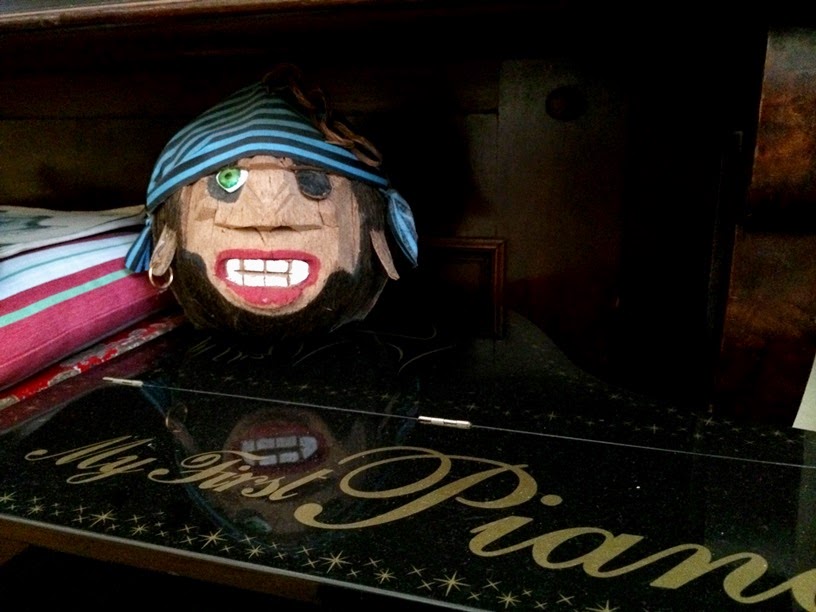 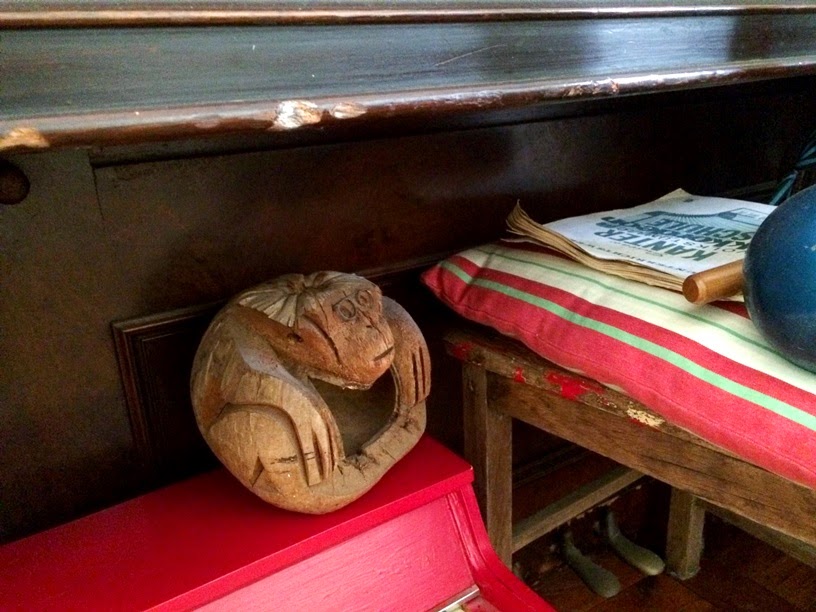 Coco the monkey, the bee's knees of monkey nuts, nestled on another toy piano under the real piano. 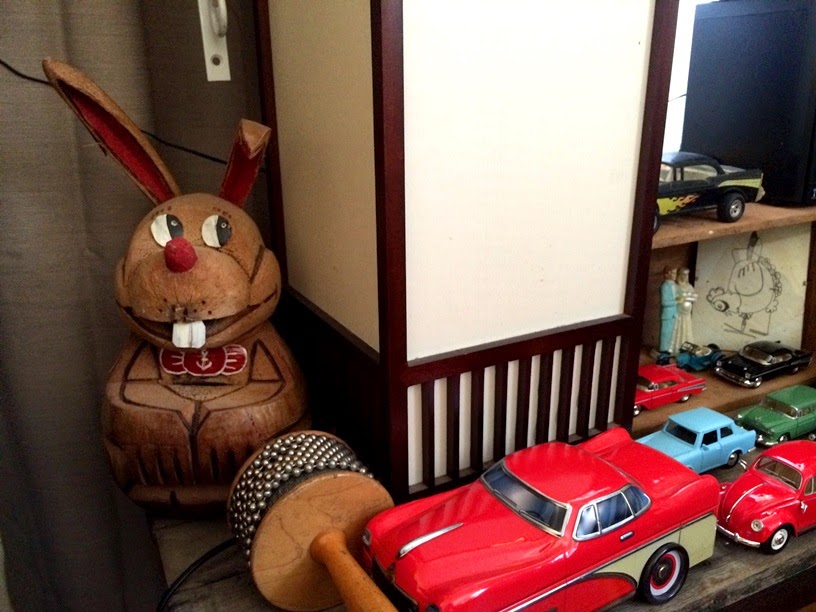 Mr Rabbit is asked to comment on traffic projections for the mooted WestConnex project in Sydney. A triumph for trotted-out timely trinkets. My initial thought: perhaps it's one tableau, on a tray or board, easily lifted off. No. Fortunately I had help. Surely it was just as much fun for the young ones to take them off as it was to put them on. Is Christmas cancelled, Daddy? 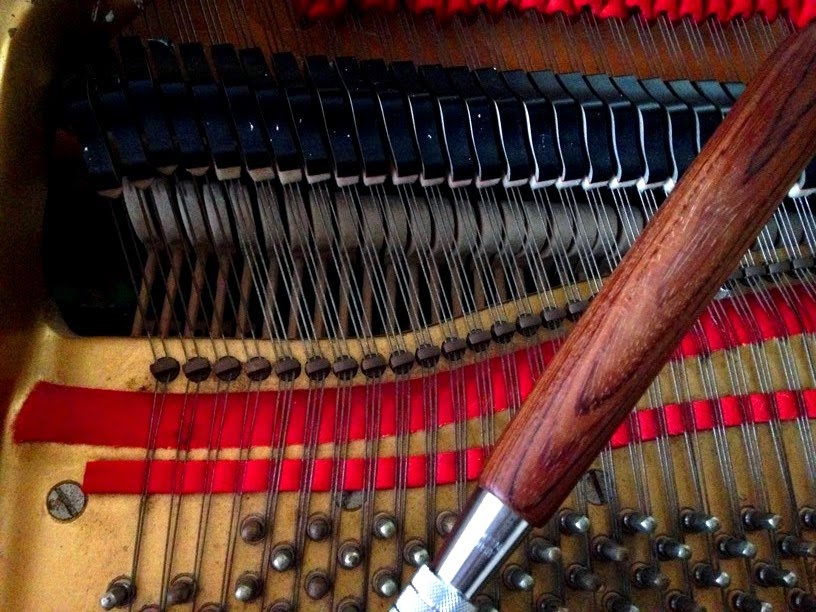 The embryonic Zimmermann grand had another slightly annoying peculiarity. The strings were so angled as they travelled through the agraffes at the bottom of the treble bridge, that the situation was able to elicit the occasional 'on the wrong pin' moment for the tuner, not with any danger at hand. More careful peering and squinting was required for general navigation. 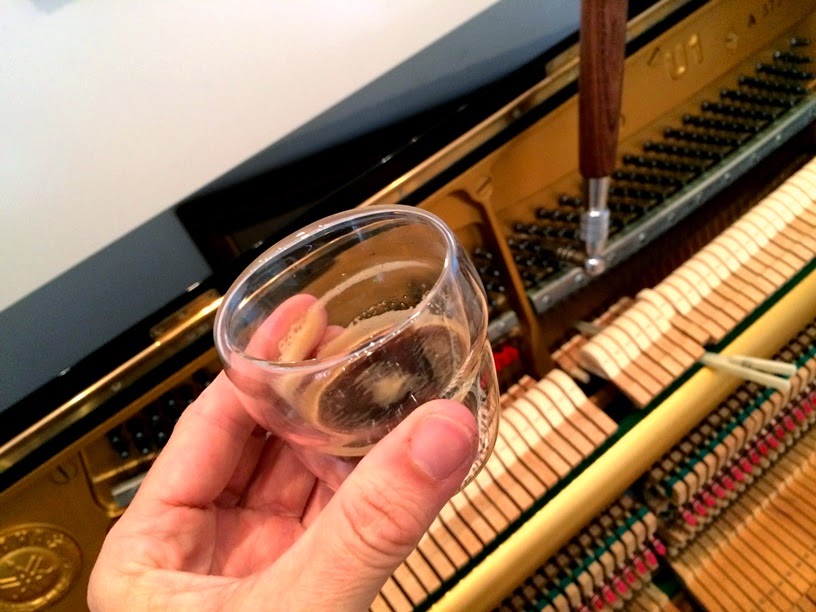 Coffee is art, science, meditation, medication. Part pleasure and part perk-of-the-job. No, all pleasure, but I'm happiest when 'short black' is not the description of my piano prey. This fine Yamaha U1 piano is quite the perfect height... 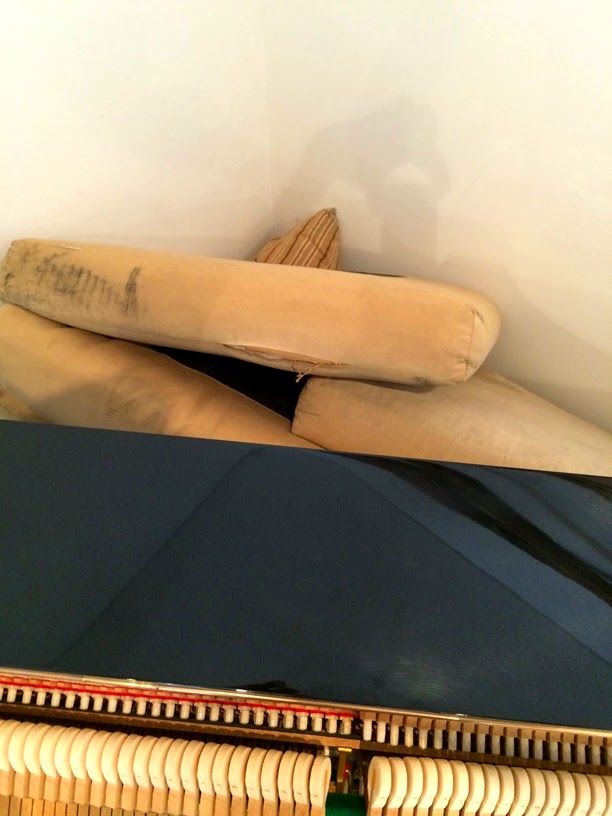 ...but in the beautiful but acoustically 'live' space, it's considered too loud. I stood on the piano bench to snap the amusing and not entirely ridiculous remedy and made a note to discuss other helpful ideas with the client. 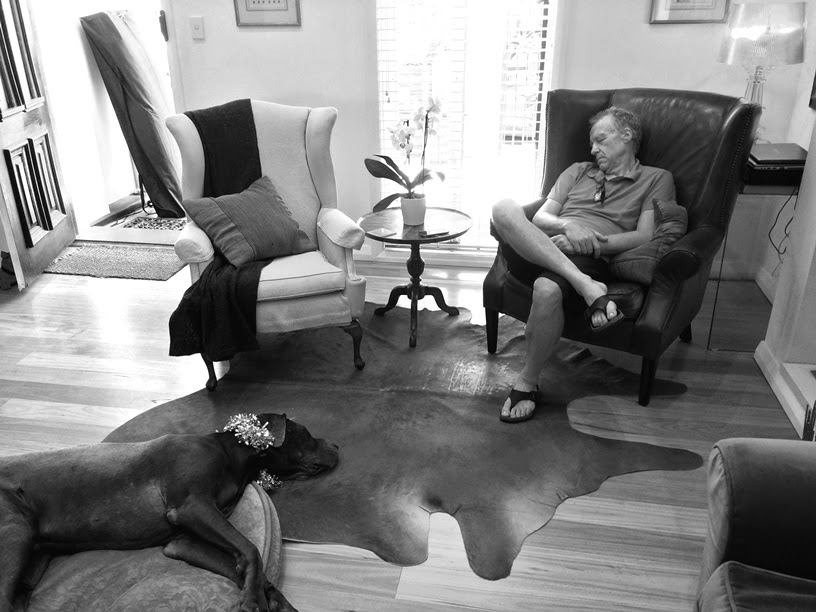 The sound of a piano being tuned must be soothing enough to some. I turned around to offer another thought on acoustics, pianos, coffee, life - to witness a serene scene. I later learned that the pianist-of-the-house (pictured) had been on a 70km cycle that morning. That's ten times the distance I was likely to have piloted my push bike to my local activities that day, or any day. 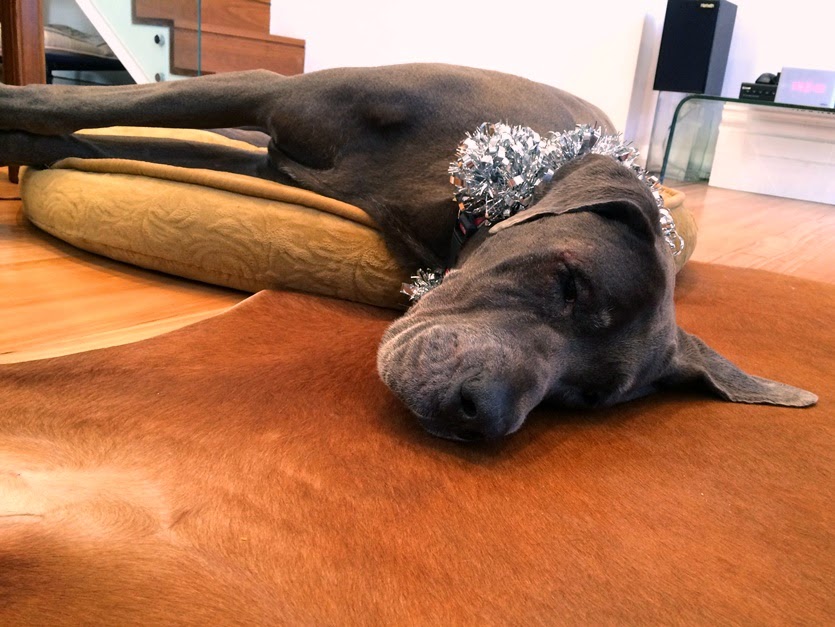 I'd been intent on snatching a follow-up photo of Lloyd The Great Dane who featured in a little clip I made after my last visit. They've upgraded the piano since the film. 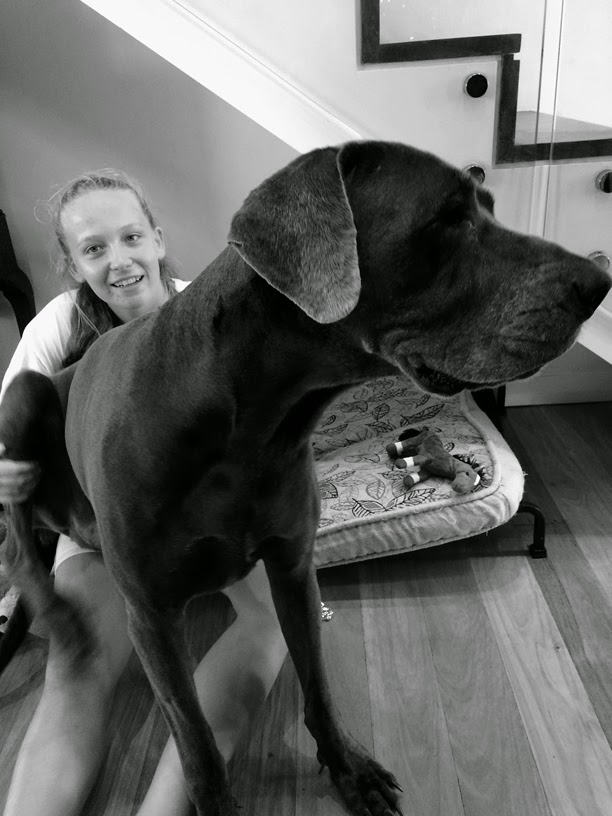 I learned Lloyd had also featured in a stunning coffee table book with photographs and stories of the local dogs. I'm sure he takes redefining 'autograph hound' in his lengthy stride, with his YouTube stardom already well established. Incredibly, when I made my clip and uploaded it, I stumbled across another clip which I simply knew was little Lloyd learning his impressive tricks. Lloyd wasn't little for long. 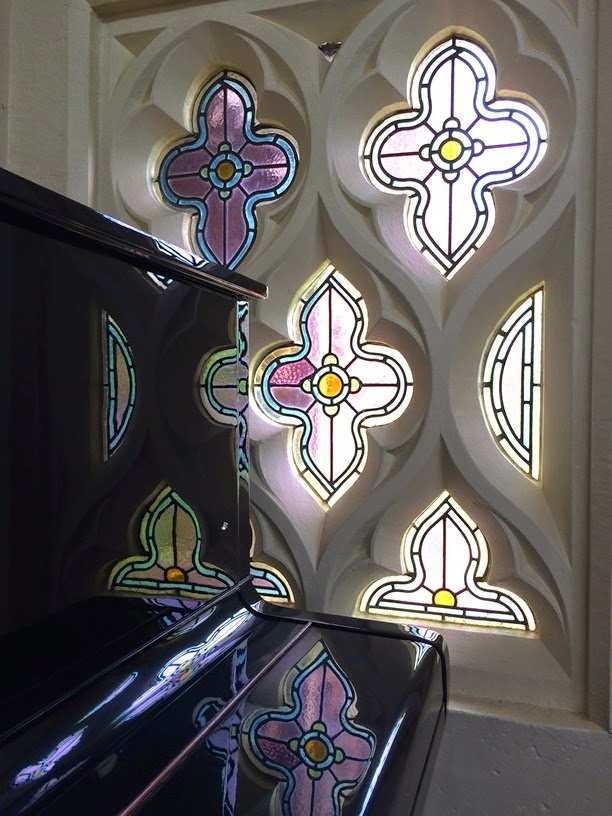 This house was clearly not always a private residence. 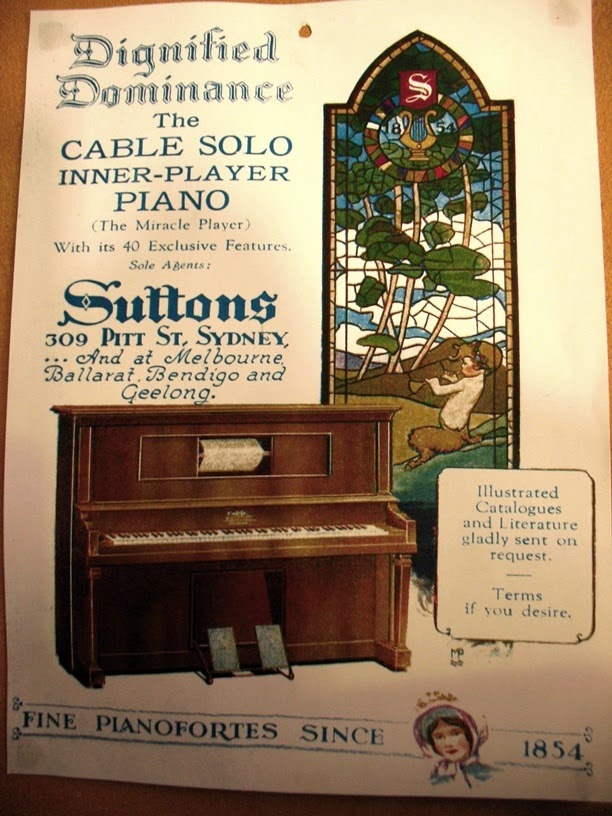 I hope I brought a dignified dominance to the tuning. 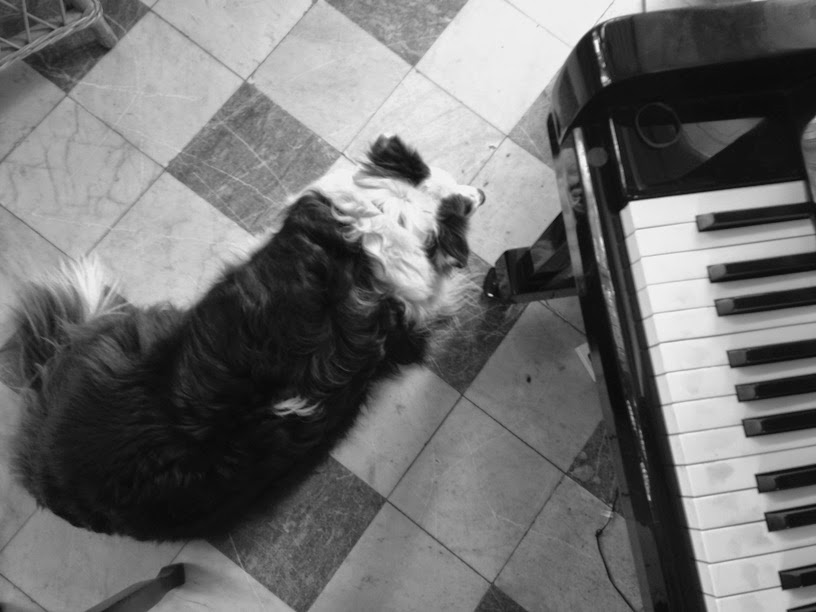 I'm alone with a doggy reclining on the heritage floor of the churchy-house. Mercifully this dog is so relaxed and uninterested in me that in time I, too, am able to relax. 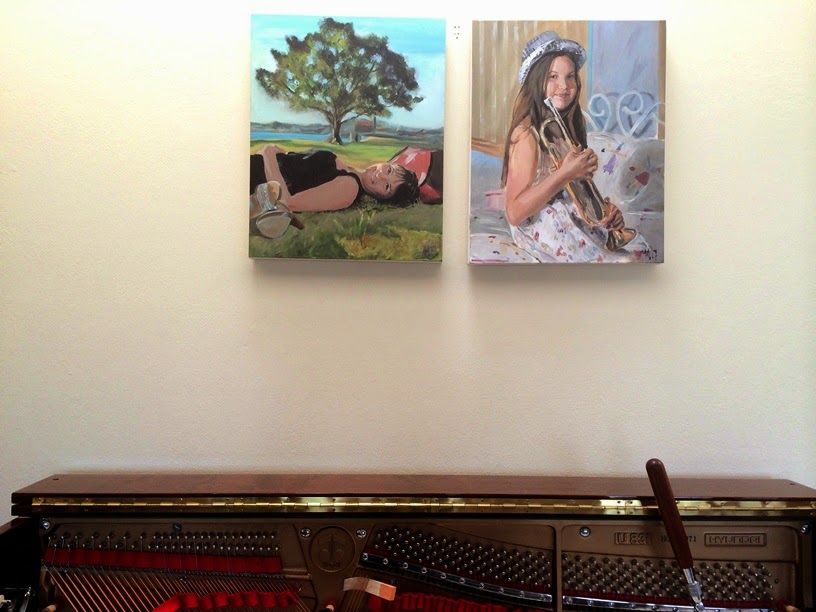 One gets a lot of time to reflect on the art above a piano. 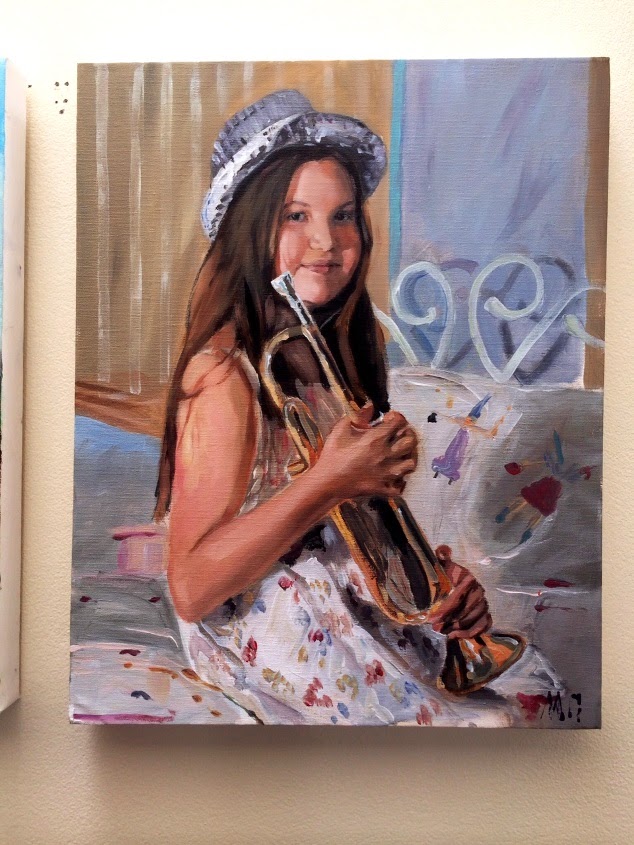 This is the young musician for whom I'm preparing the piano, I conclude. She's about two years older now, and her piano is about two semitones higher, back up to A440 concert pitch after a significant excursion north, at my persuasive hand. 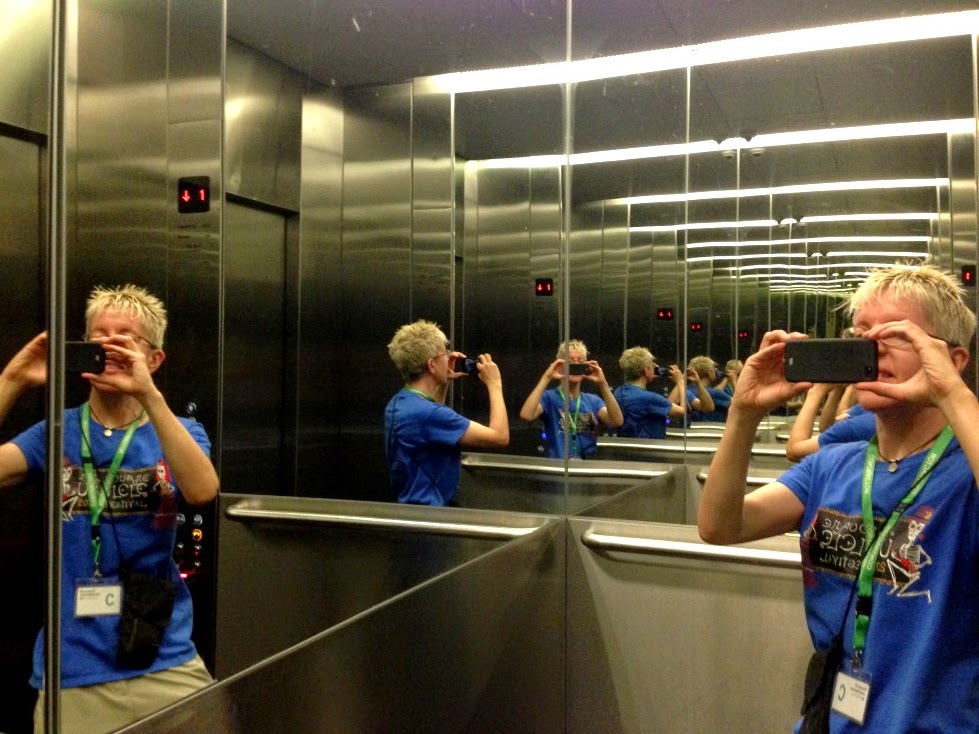 I leave a corporate job and decide to clone myself in the lift. Finally my home life and touring performer life can cohabit. Things in my garden will now doubt still die. 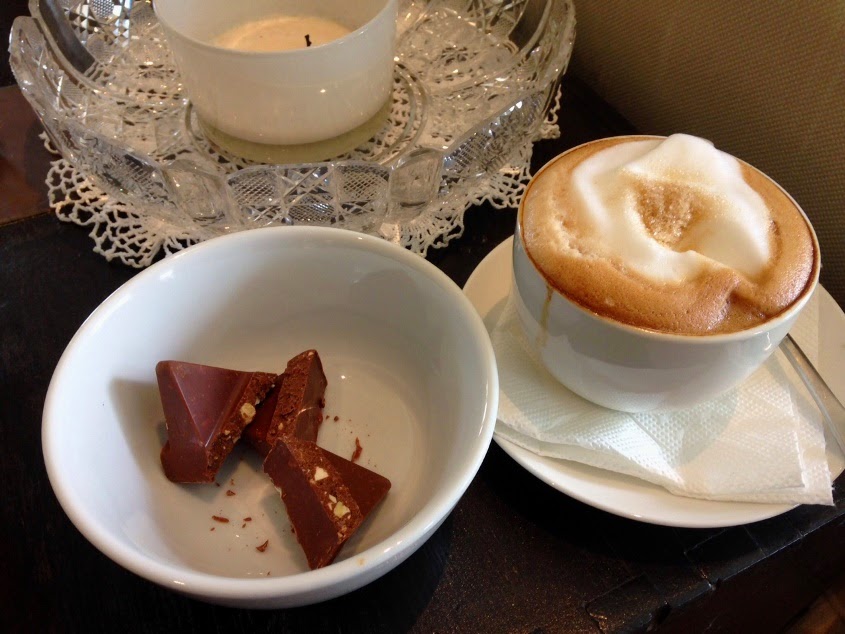 I don't document every delicious fortification I'm offered while helping pianos, I swear. It was an in-joke communication with a colleague about our wonderful work perks. We were never this frivolous in the film era. Although I'd always dreamed of employing my own personal courtroom sketch artist to capture these moments before we all went digital.

I appear to have already devoured a Toblerone triangle before thinking to celebrate the day at the office. Coffee pod machines are ubiquitous. Almost everywhere I go I am offered a much classier coffee than I can provide for myself at home. COFFEE! 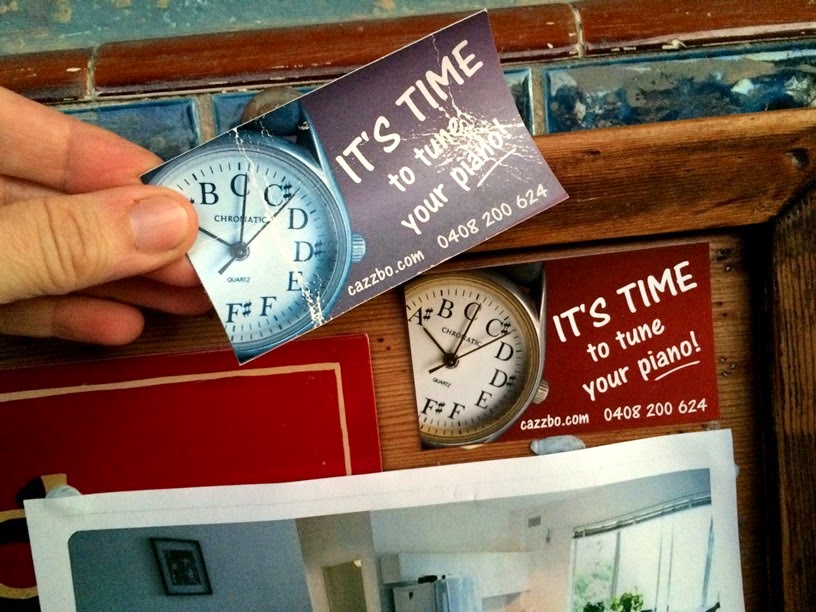 I'm crap at marketing but every so often I make a half-arsed token effort. I was buoyed by getting a job as the direct result of the noticeboard outside one of my favourite local cafés. A first. The additional mention that my card was weathered and faded by the ravages of the Aussie sun fortified me to immediately trek there to install a replacement. 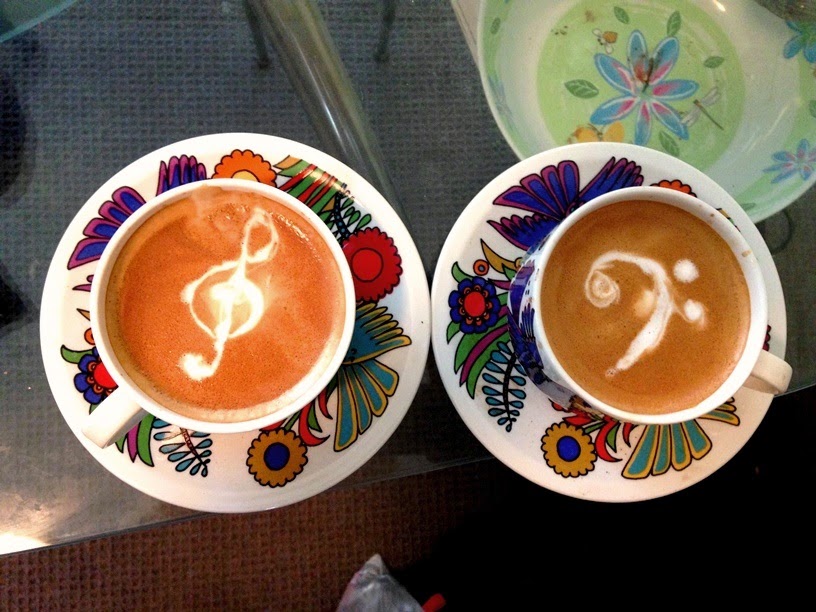 When the Caped Regulators* found themselves tending a troubled player piano, how could we not find additional positive energy for the job with our second round of coffees? I made my maiden test of the iThing's time-lapse feature to produce this little clip of our day's adventure. 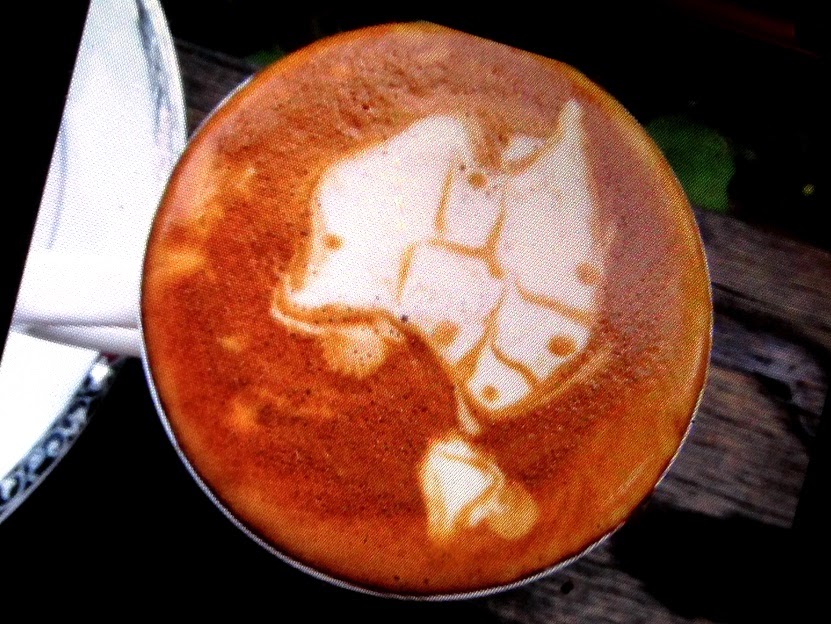 I effectively live in Little Italy. You can see it mouth-wateringly marked on the map.

A multi-talented piano client guided me through just a few of his delicious daubings on crema canvasses by scrolling through images on the postage-stamp-sized preview pane on the back of his digital camera (how seemingly old-fashioned, yet it was my go-to method for sharing things until quite recently). I was so enamoured by the art that I photographed the back of his digital camera with one of my beloved iThings. 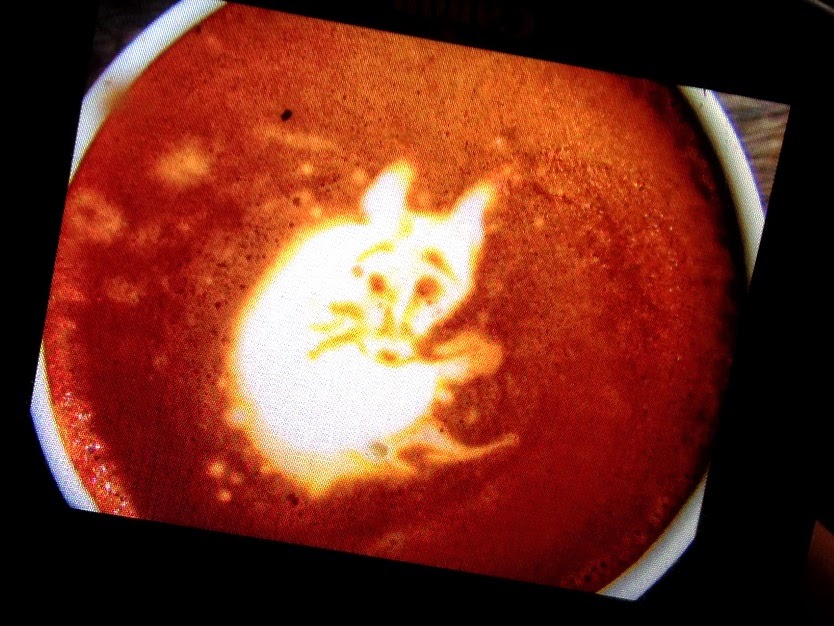 Scared possum. The client's work as a builder and roofer mean that he has served many a possum's  eviction notices. 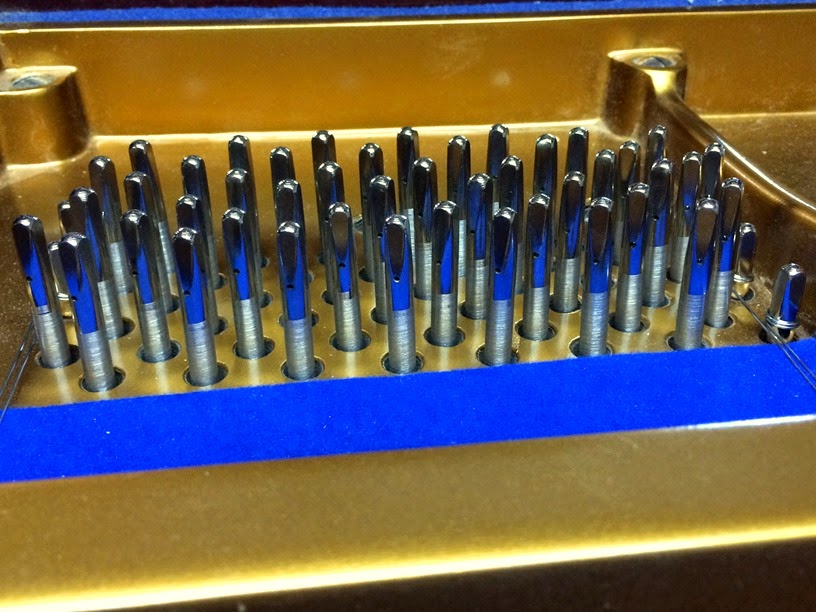 A piano is restrung in the piano lair. The brilliant blue of the new stringing pillow reflects onto the tuning pins creating ranks and files of regimented soldiers. Music wire strings are installed at each end of the section to stabilise the position of the stringing pillow. The piano's cast iron frame was lovingly gilded with moon dust at an earlier stage of this instrument's rejuvenation. Stay tuned for more tuning and workshop adventures.

* Piano pamperers to the stars - and you.

The Caped Regulators: In the Piano Lair

At the Famous Spiegeltent (Sydney)