Interesting piano sightings. The universal thread is that I was not specifically required to nurse any of this lot (at this stage) so I could observe them in their natural (or not so natural) habitat. 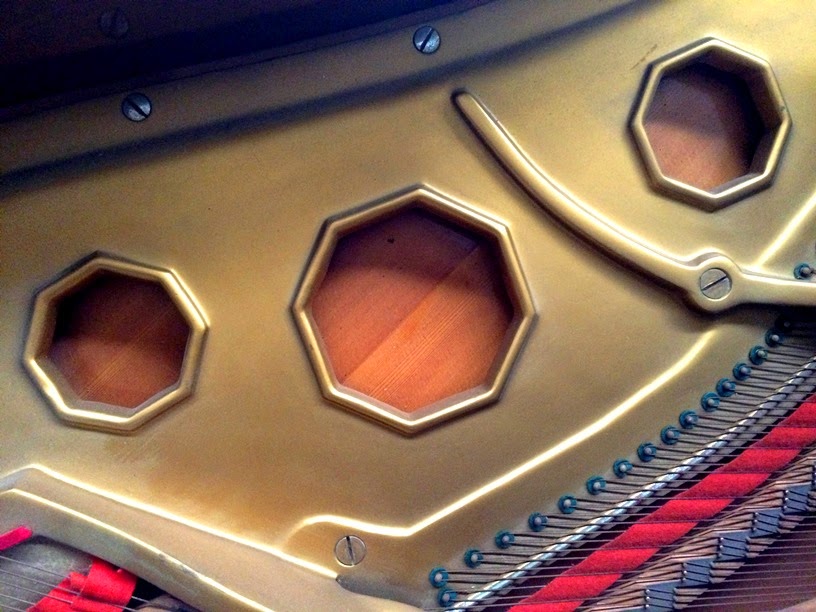 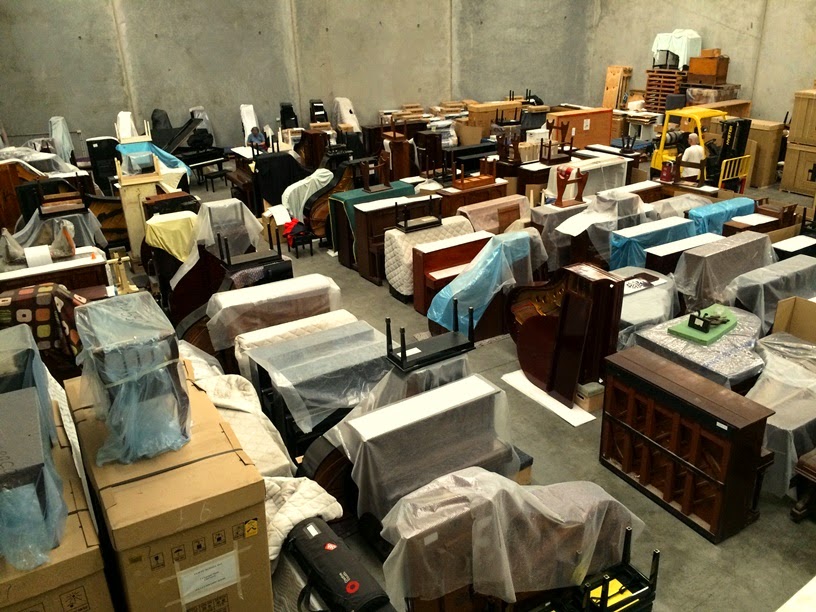 Where does one hide a piano hoard? A piano storage facility.

The surprisingly bright and breezy warehouse serves house movers, renovators, divorcées, procrastinators, piano technicians and piano wholesalers. Surely most punters have only one piano each (that is not to say they're not procrastinating) but perhaps it's just the piano technicians who have hidden hoards (except me!). 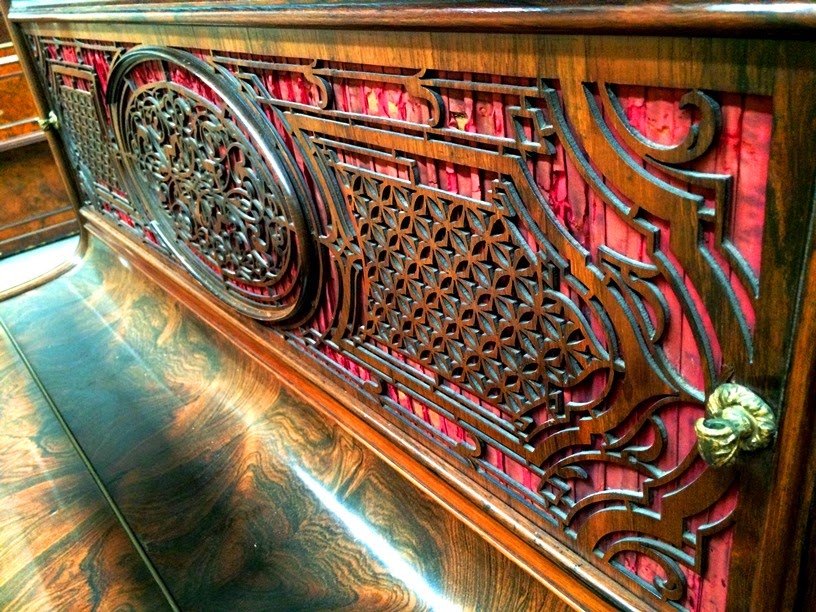 Lattice front board, with modesty curtain and nipple-tassel candelabra. 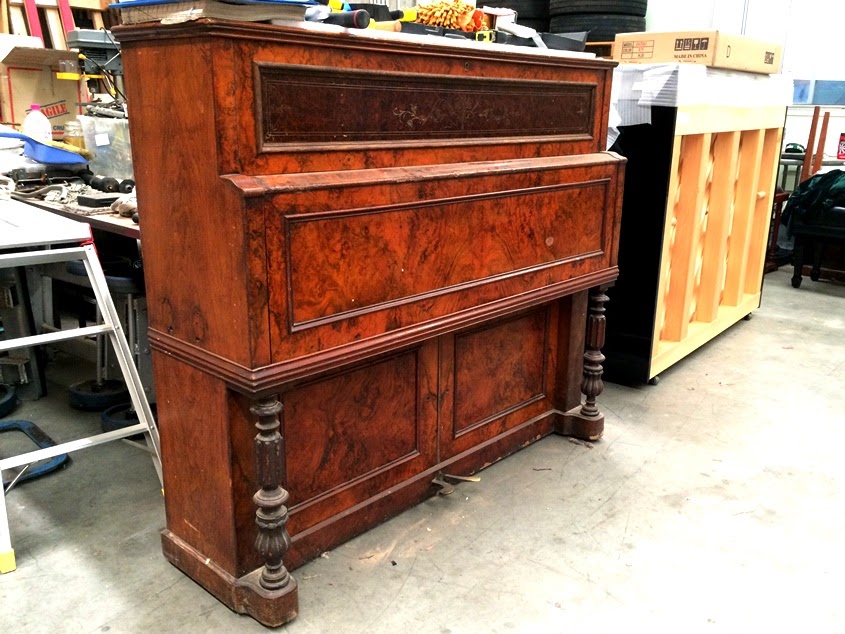 A curio I had read and heard about but never witnessed. It's a ship's piano - built for galley-style compactness with a fold-up keyboard. 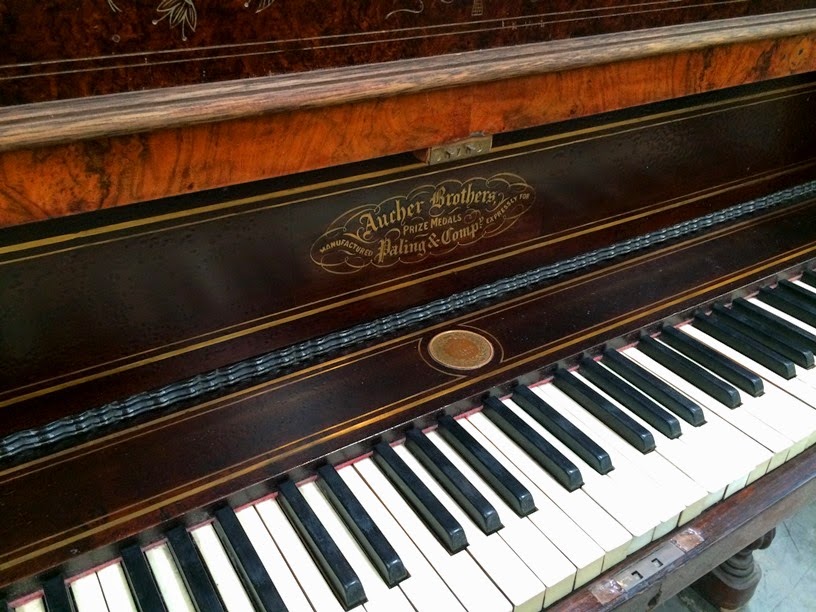 I carefully folded the keyboard down and it clicked into place. Wherever the release knob was hidden, I never found it. I was unable to stow my musical tray-table. 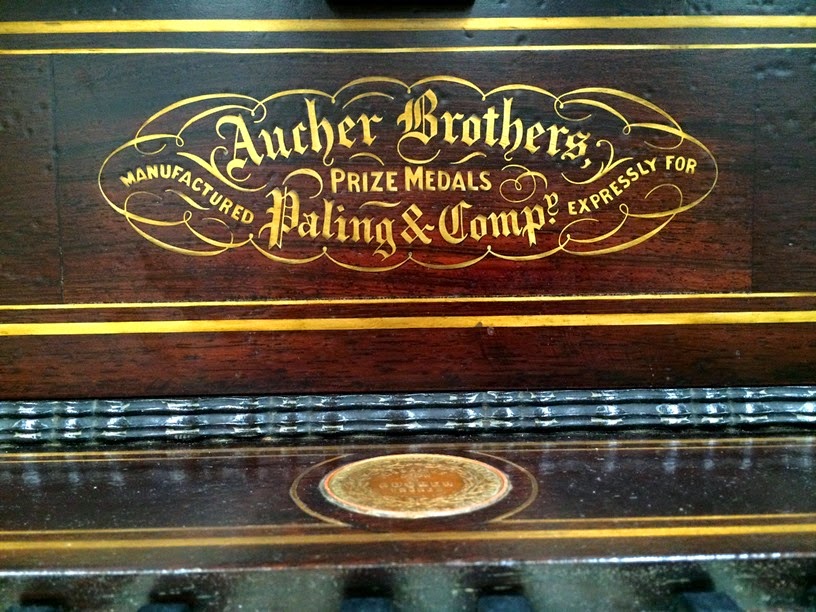 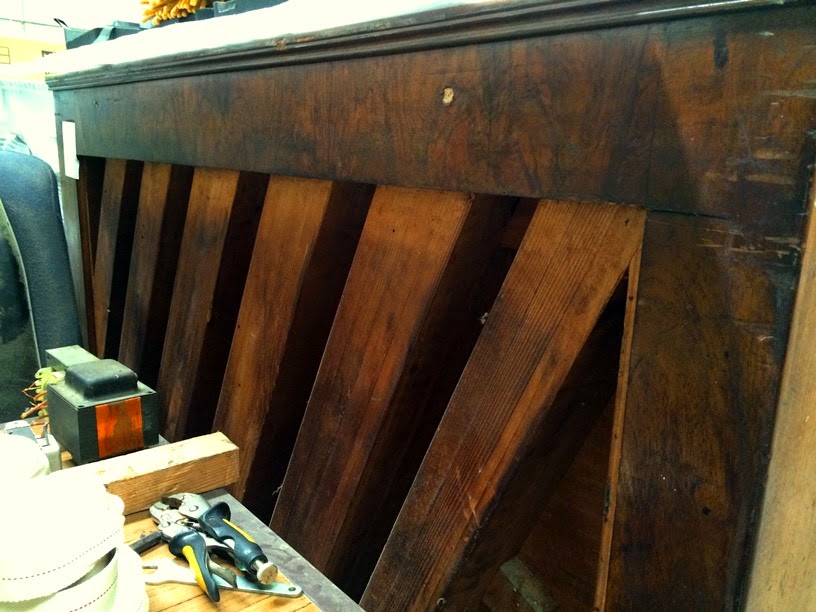 Compact indeed. Even the chunky back posts (which are normally vertical in most uprights) are designed with a jaunty sea-leg lean, but with sufficient structural integrity to endure a bottle of champagne being smashed into them upon launch. 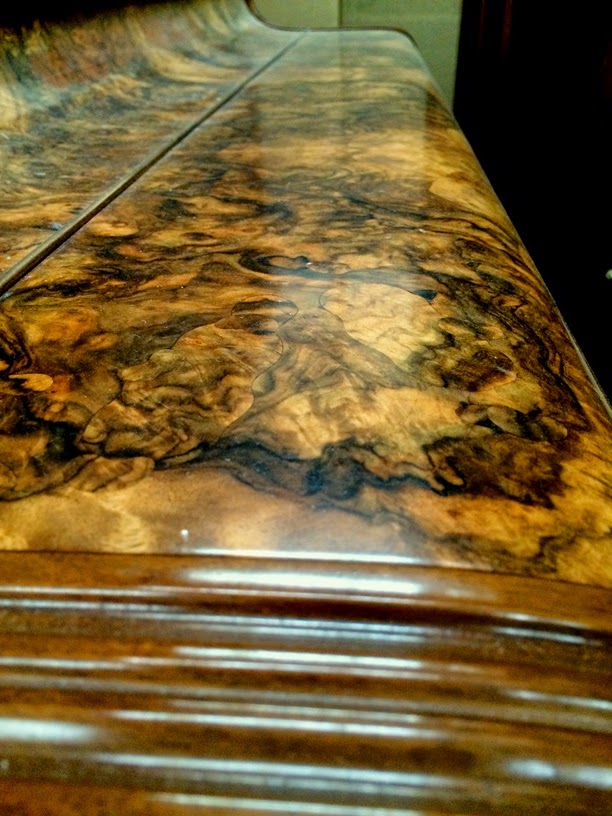 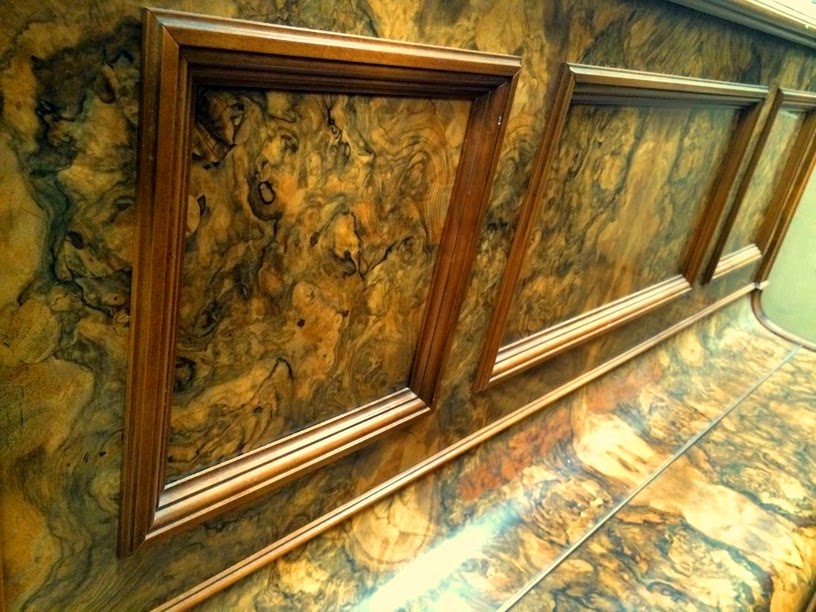 Stunning. It's a pity the action and its components inside are often aged and degraded to the point that serious redemption is not feasible. Everything is theoretically possible by way of rejuvenation (think old car, new engine) but the costs can easily escalate. Often, with these pianos, their guts have gone to gizzards. Aren't they the same thing, Cazzbo? Not necessarily.

A few decades ago there was much more of a trade for technicians in restoring such pianos inside and out. They were simpler times. Back then these pianos were fifty years old - now they are receiving telegrams from Her Majesty. Pianos were arguably more of a focus within the home. Now, the influx of cheap Asian imports (which will not be travelling half as well in half as long - they're not built to last) means that the cost of specialist skills, labour, materials and tools is rarely justifiable to fix up these oldies. There are exceptions, of course. 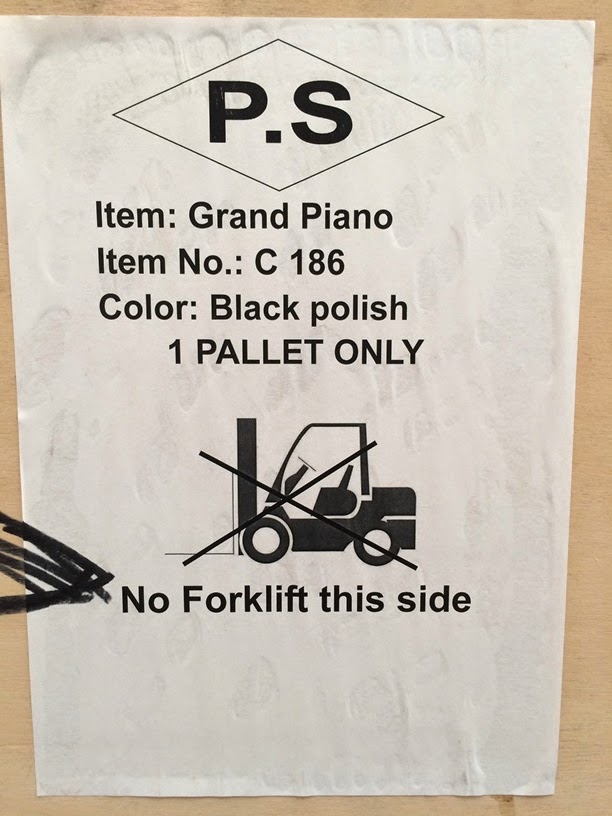 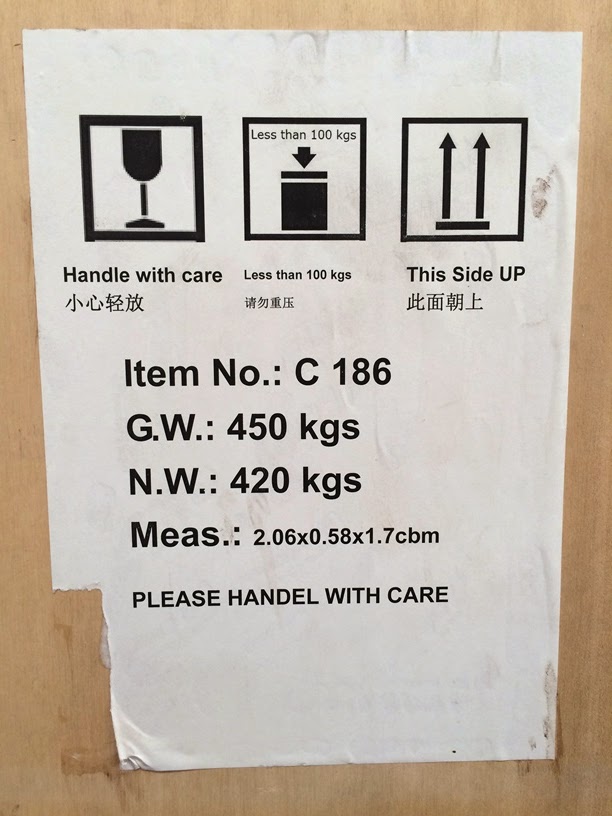 PLEASE HANDEL WITH CARE. That has to be a joke, right? No, I really don't think so. I sure as hell can't make delicious puns in Mandarin. I'm convinced this is a fortuitous typo that has somehow proven blogworthy. 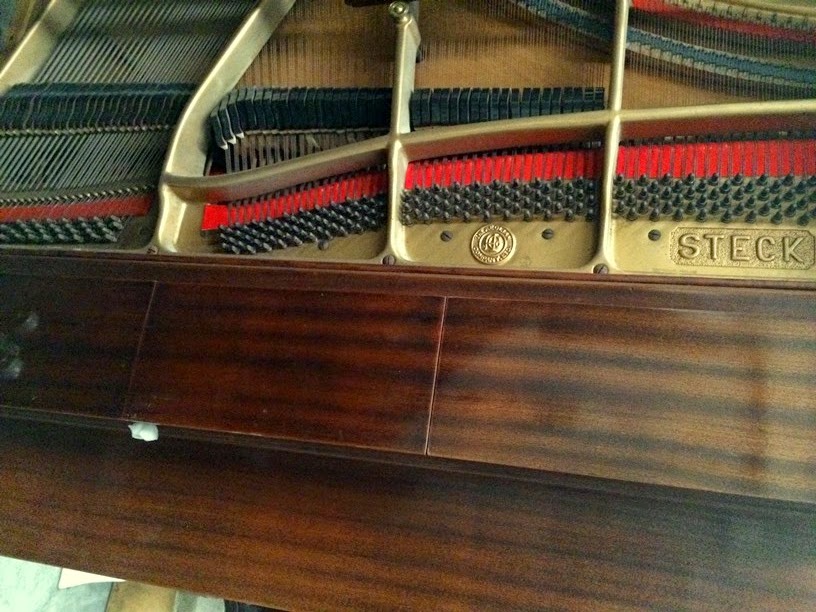 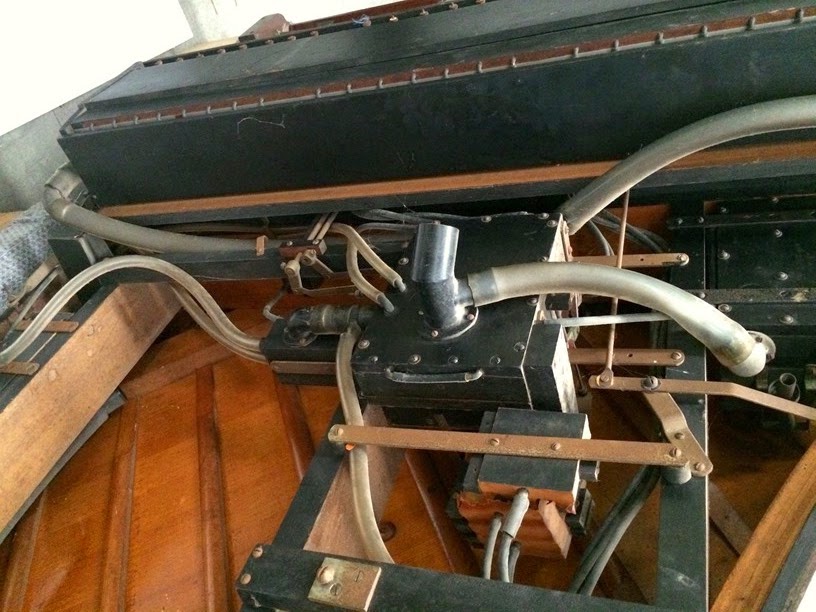 Is there a plumber in the house? 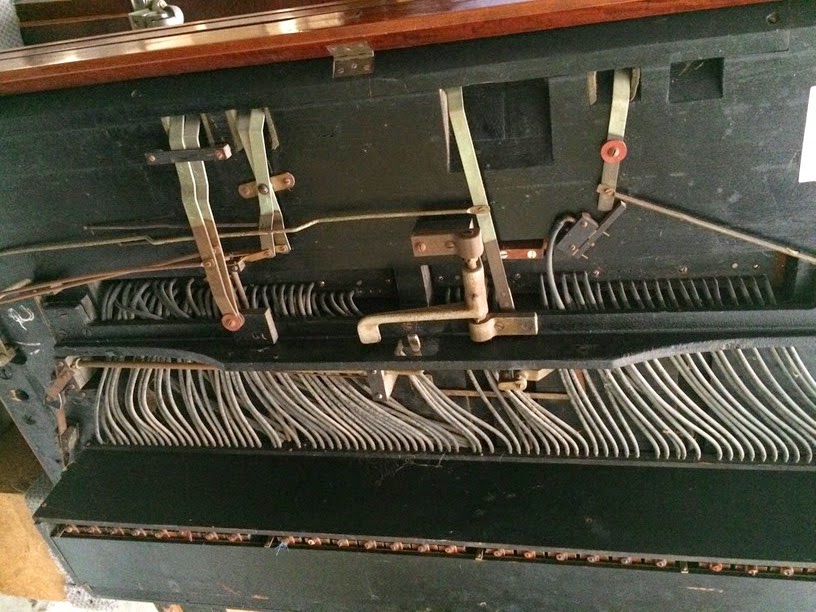 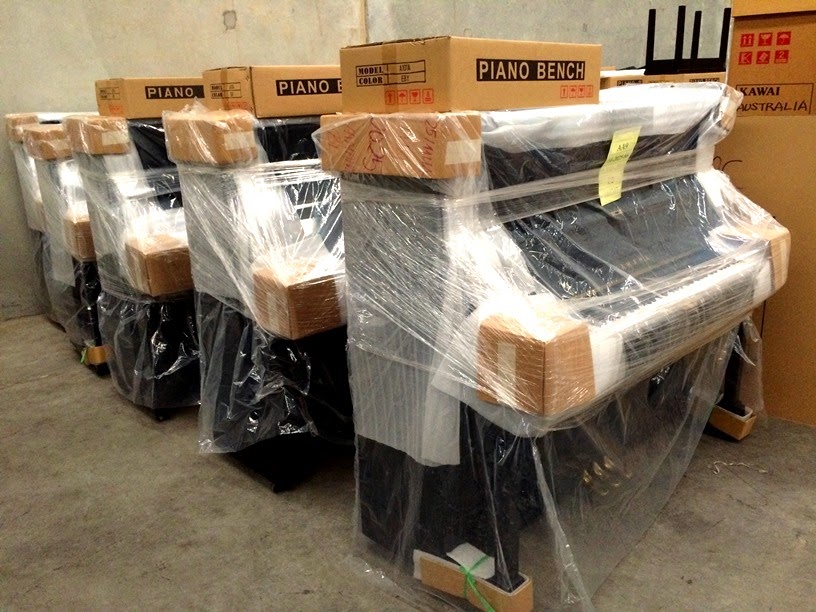 The piano wholesalers may also boast hoards when a shipment of (not ship) pianos has arrived. 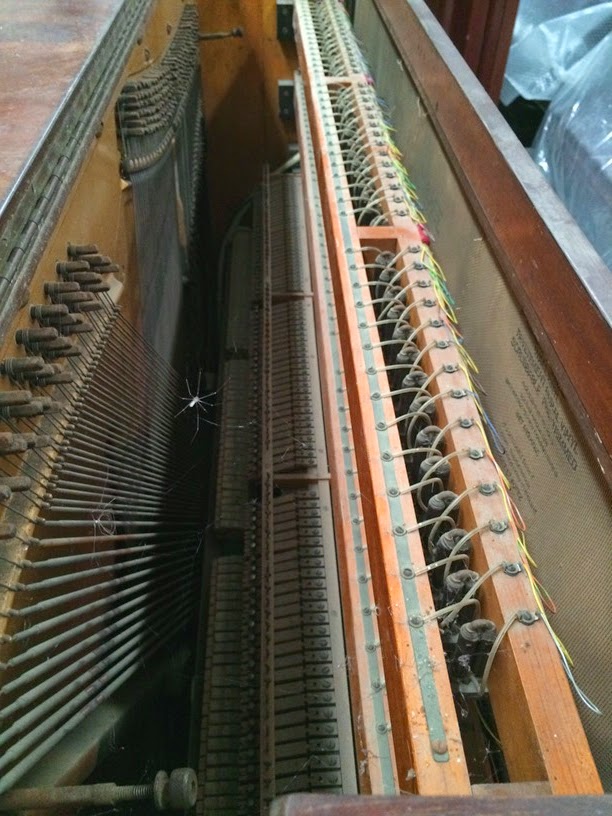 Some weird extra feature that I'm not used to seeing. No, not the spider, I am used to seeing them in pianos. No, that other guff to the right of the shot. It is possibly part of a player mechanism, but it looks different. I could not identify it, and I'm a piano technician! By the way, the action has been removed at the spider's request. The upper front panel of this piano had a modesty curtain which appeared to have been made out of leftover wallpaper. But you tell that to the kids of today... 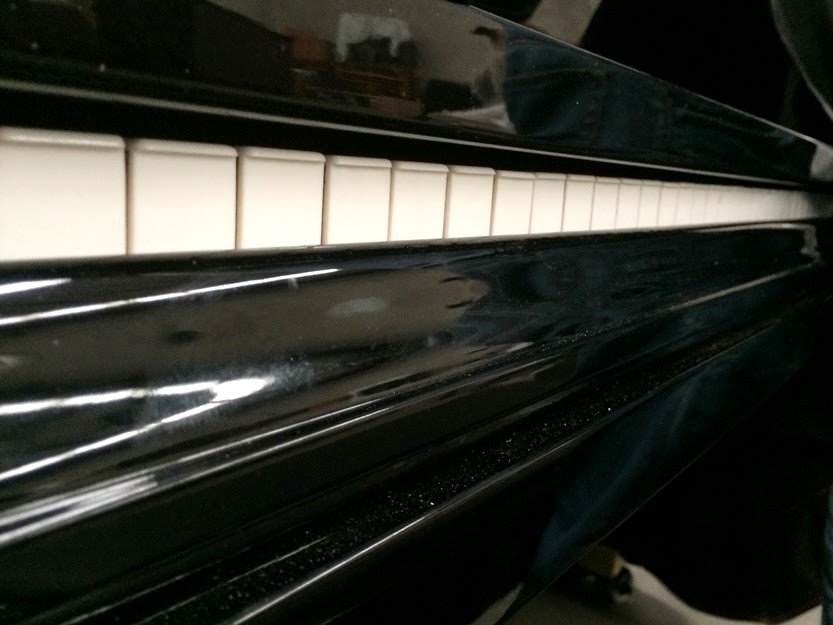 Baldwin grand pianos perpetually smile even when the fall board is closed. All teeth - how American. 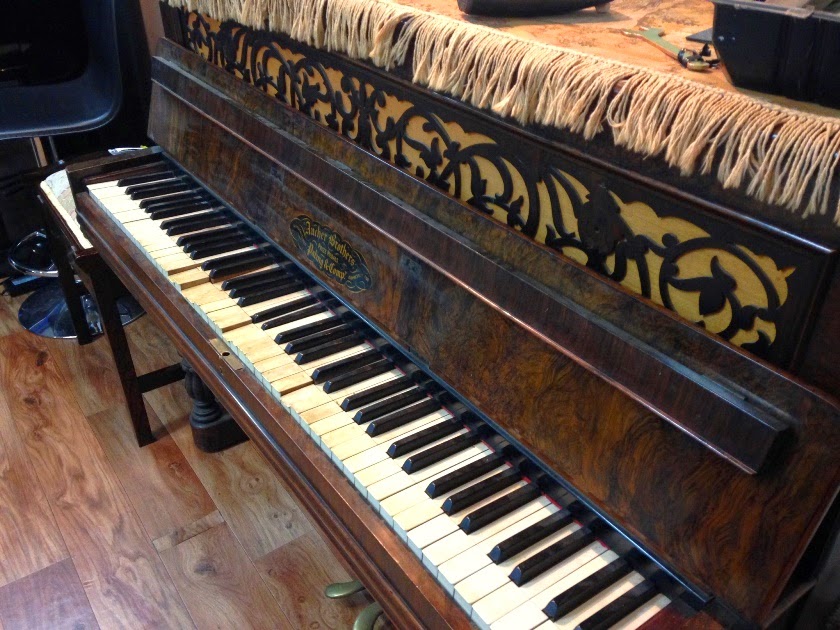 Ooh, ahoy, here's another Aucher ship's piano, redefining shipshape. It plays itself by the look of those keys. It's not my problem, this failure to launch. 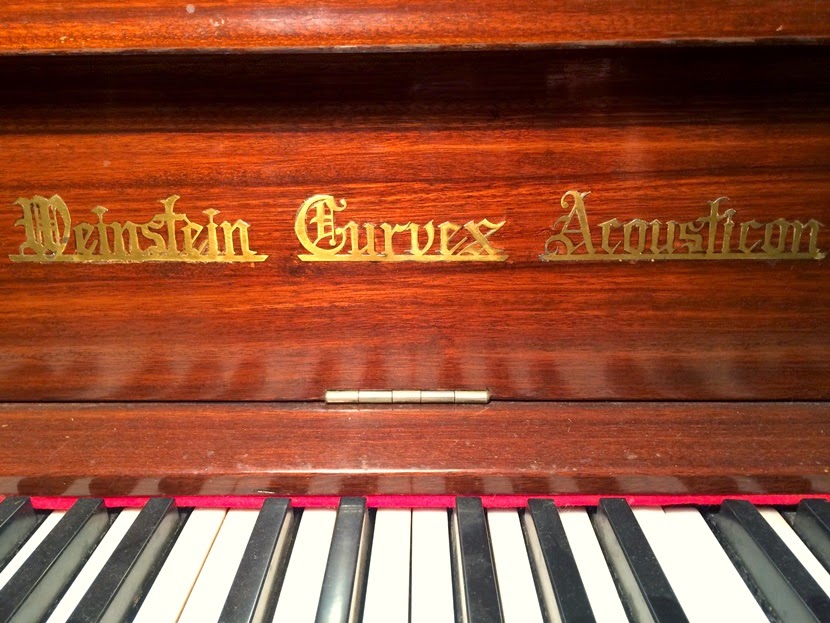 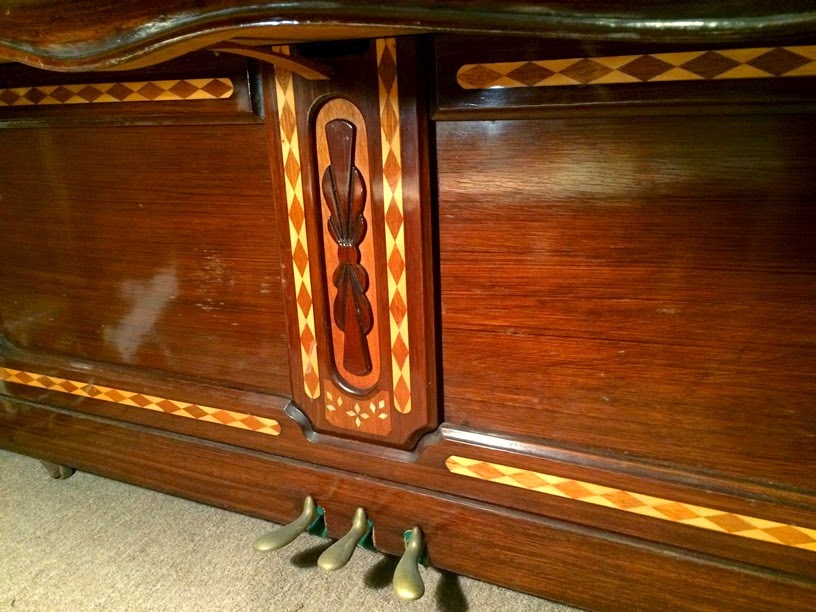 I suppose to some it looks pretty, in an island-trinkets-sold-to-tourists kind of way. 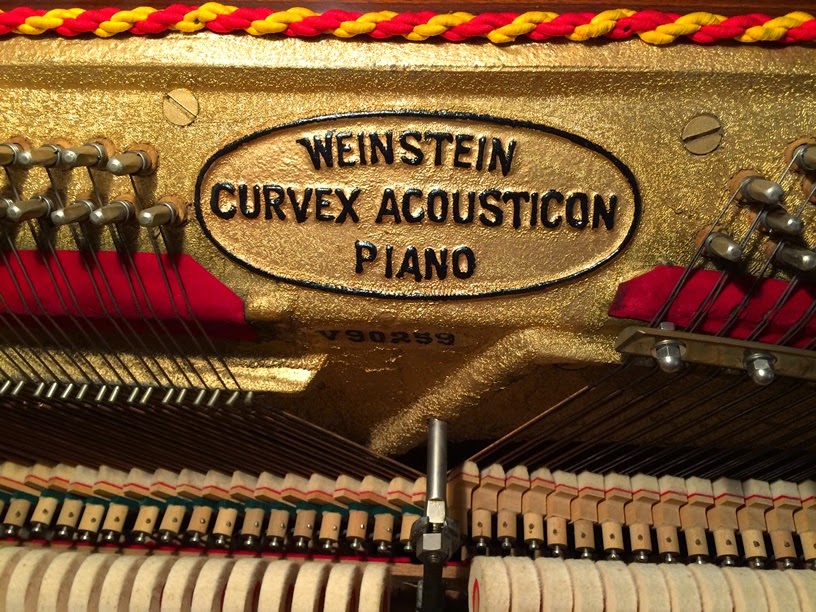 It looks tidy enough inside. Ignore the reality that it sounds like shards of glass are being inserted into one's ear holes. Ask your technician about voicing the hammers for tonal adjustment. 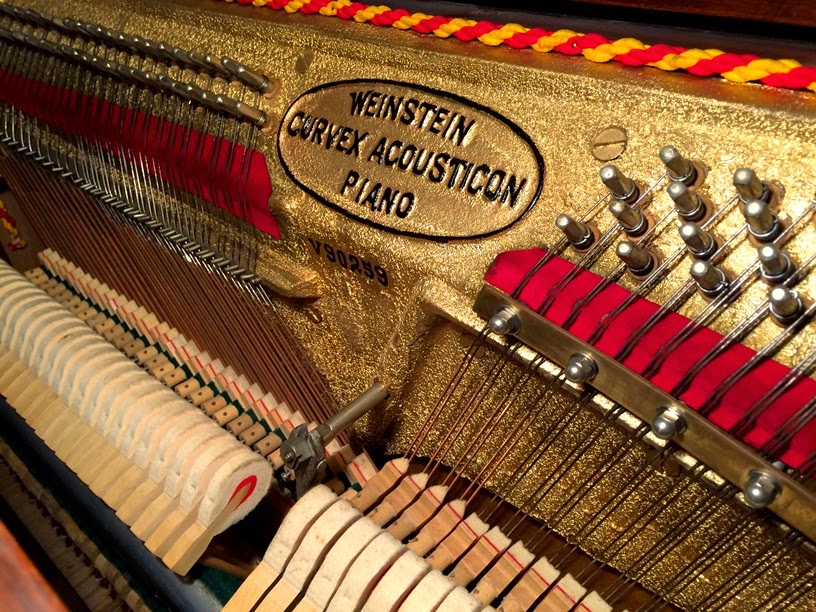 Seriously, what gives? Is this angled pin field designed to put the technician's back out, or back in again? The stringing pillows (cushioning an additional angle for the strings) seemed pure velour. They reminded me of fancy 1970s clothing (which seemed fancy through my child eyes, at least). Velour is not a strong selling-point in pianos. 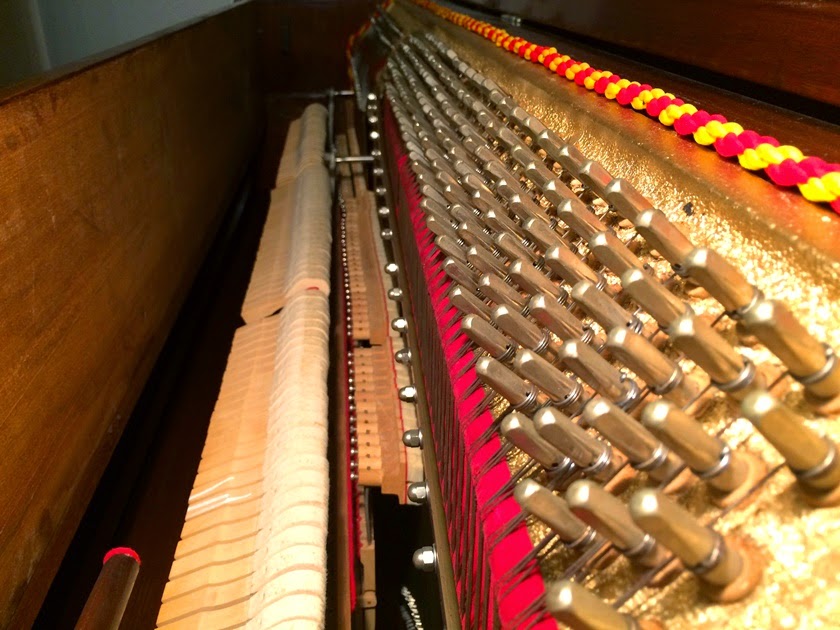 It's difficult to portray the Curvex Acousticon's curve. I should have packed a protractor. The pin block felt like papier-mâché and presented few signs of being secure enough to hold a tuning. 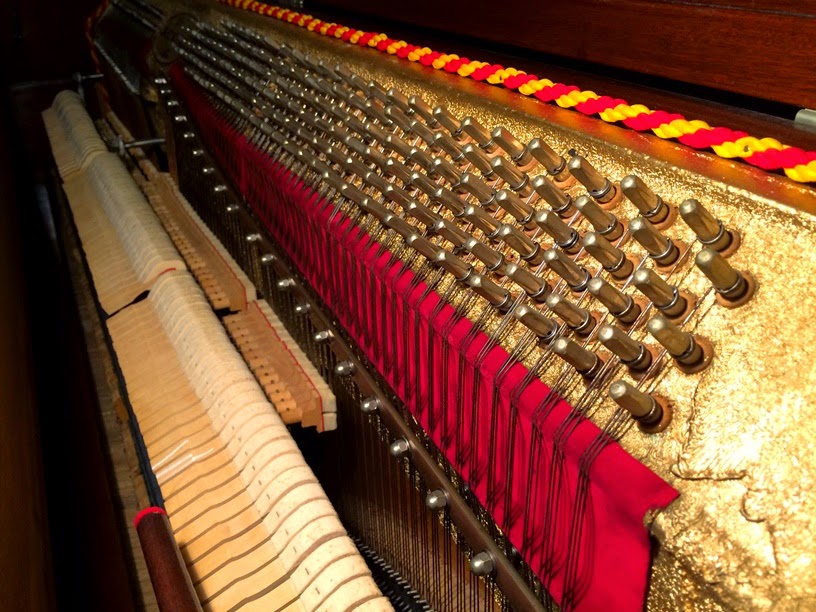 Angling. It's like a cyclist trying to photograph the gradient of a hill they just climbed. I never bother. What, to document gradients? No, to cycle up them. That's not true, but I am as selective as anyone can be in Sydney. I never seek out opportunities to work hard as a cyclist. 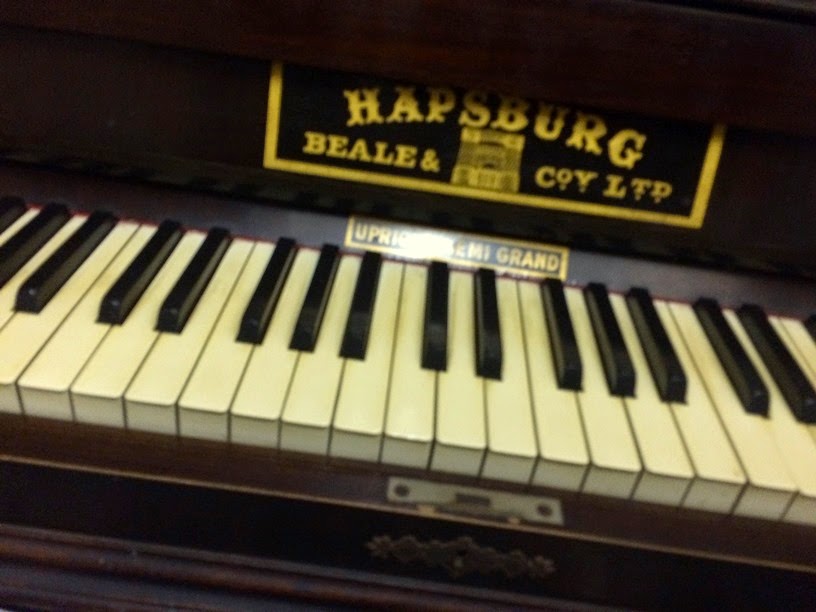 I promised you a Hapsburg. I don't know why. It is another notorious entity in the piano world which may well see a piano technician slam the phone down in your ear. Admittedly, it is much harder to slam phones down in this modern era. That's disappointing, and so is a Hapsburg Beale. 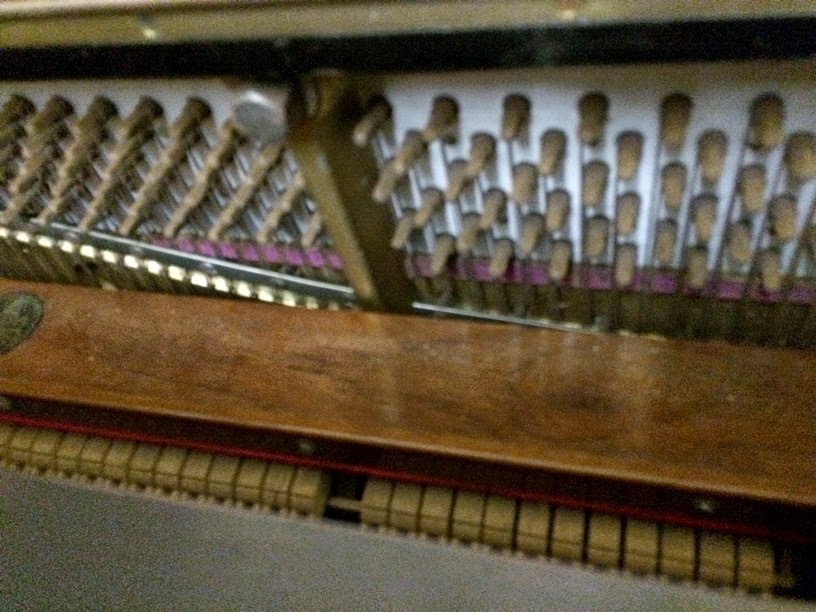 Before establishing an enviable piano production facility, the famous Beale Company in Sydney imported sewing machines and these little German pianos. Note the overdamper mechanism (that wooden rail and palaver obscuring the hammer line) it's another practical and technical turn-off.

There is a Hapsburg Beale Piano in the Powerhouse Museum. That's good, it means nobody is trying to make music on it or keep it in tune. 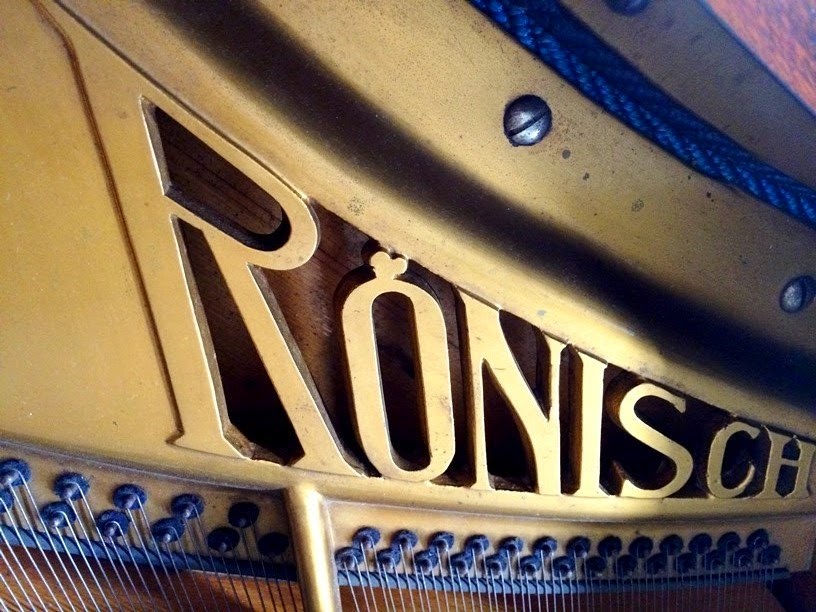 The language of pianos...

Goannas in the wild...