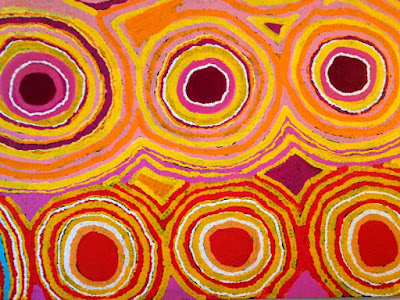 You really get a good look at an artwork when it's right above the piano. 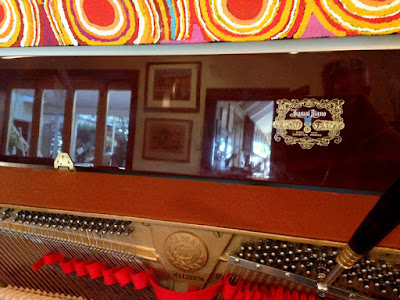 No one is going to sneak up on me. Or are they? Probably. This lid had no hinge pins (I don't know who to blame). The lid promptly performed a disappearing act by falling down behind the piano. I improvised some fixings and refitted it at the end of the tuning. 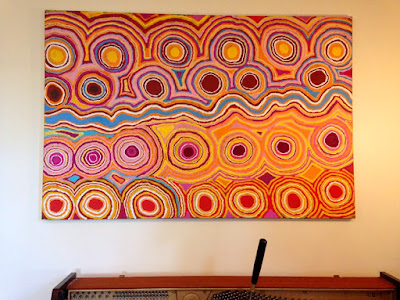 The meditative nature of a detailed aural tuning sees me bathing in coincidental partials and concentric dotty donuts. Many works of this type are maps and seasonal records. In a bumper year Krispy Kreme dispensaries would germinate and bloom both north and south of the serpentine stream. 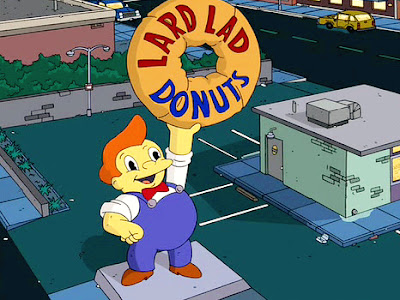 Thrilled that Lord Lard Lad had again provided for them... 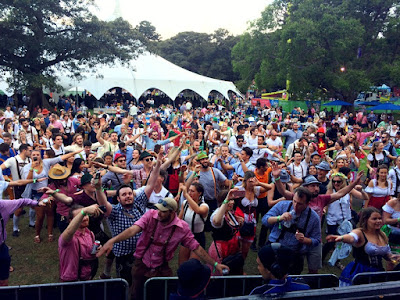 ...the natives would celebrate with the traditional Dance of the Donut.

OK, perhaps this is my view from the stage during a very seasonal gig. I can't believe that I'm such a mercenary muso that I'm prepared to wantonly whoop it up to celebrate the marriage of Bavarian Crown Prince Ludwig to the Saxon-Hildburghausen Princess Therese without a single reflection about the happy couple. 'Cazzbo, do you take this gig? To have and to hold?' Perhaps against my better judgement, 'I do.'

After many hours I witness a different drunken dirndl dance on the city's streets and railway platforms (not by me, I wear lederhosen and never dance offstage). I had never heard the word 'uber' sprinkled so liberally throughout the lexicon as I trudged away with heavy heart, tuba and bladder. Concerned tones from every second wan young thing with phone, 'I'm trying to find my Uber...' is not exactly singing an ode to the Fatherland. 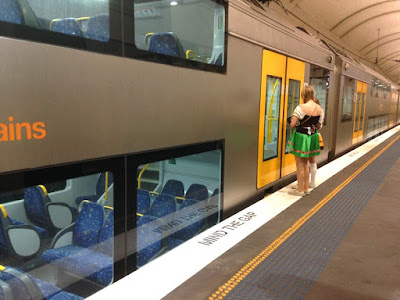 Mind the cleavage, er, I mean gap. I've suffered for my art, not only on the gig, but by insisting on attempting such stealth photography while a tuba in a backpack gig bag compresses my spine. I do it for you, Dear Reader. For you. 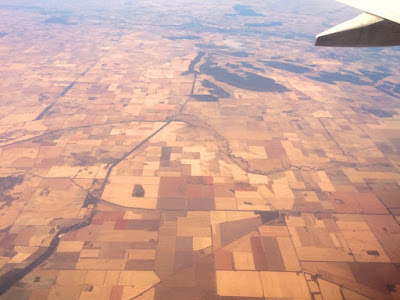 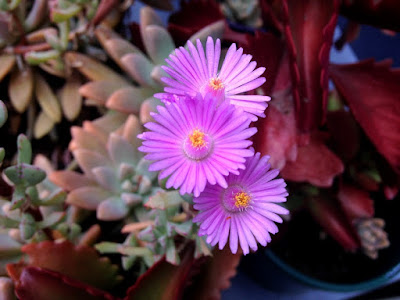 My succulents have spawned micro-flowers. A friend informed me that the burgundy hues (right) mean too much sun. So now my garden breaches Cancer Council guidelines. I learned all I know about tending succulents from Wile E. Coyote. 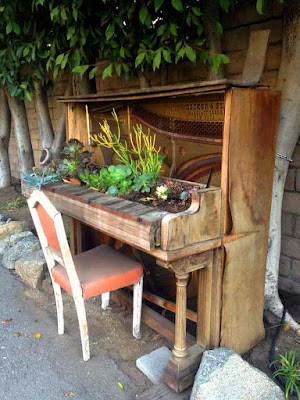 Perhaps they need a shadier spot, as do many function room pianos. When was your piano last tuned and watered, Madam? I recommend a light application of middle C-sol (Seasol). This quip works on so many levels, or none at all - you be the judge. 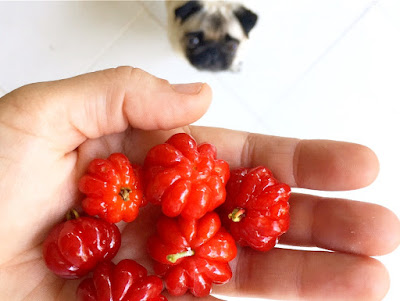 My Far North Queensland correspondent grows fruits that look like pugs. Her recommendations for my crimson quasi-cacti are not to be trifled with. 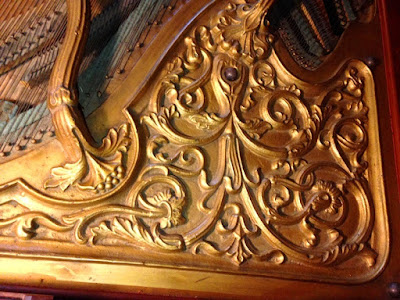 At the risk of being obtuse, square pianos are rectangular. I wish I had documented this instrument more thoroughly, but bad light and a highly-engaged client limited my aesthetic intentions. As one who totes not one, but two iThings, I find myself often illuminating the nether regions of pianos with one phone while snapping with the other.

Incredibly, the client had no idea that she possessed a historic instrument, having sought simply to provide for her daughter's musical needs. 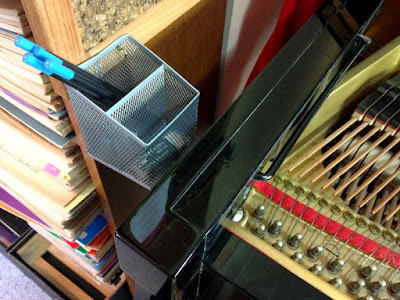 This home music teacher gets top marks for installing a convenient receptacle for her pencils, reducing the risk of inadvertently using the innards of the piano for Derwent deposits. 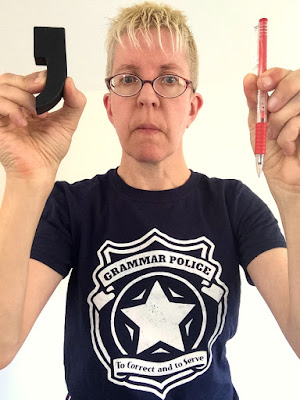 Apostrophe on both your houses. 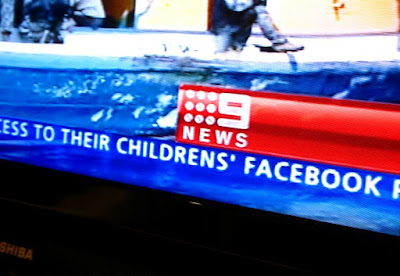 I only usually watch television in hotel rooms when I can't receive Radio National. 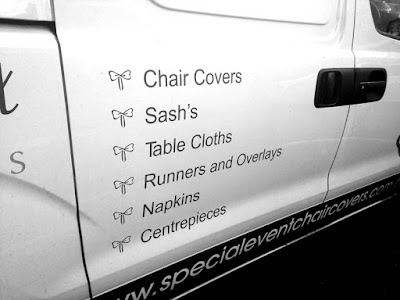 I'm about to secure the licensing rights to an apostrophe GPS system. I refuse to secure anything with these structurally dubious sashes. 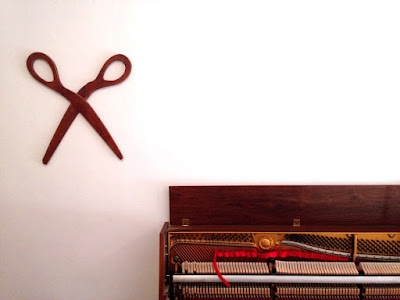 Seemingly a seamstress. Possibly an editor. 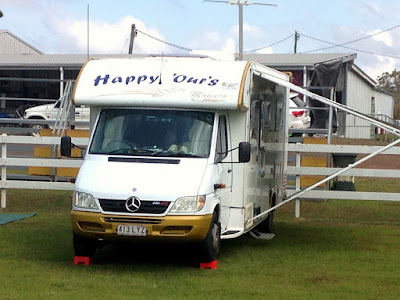 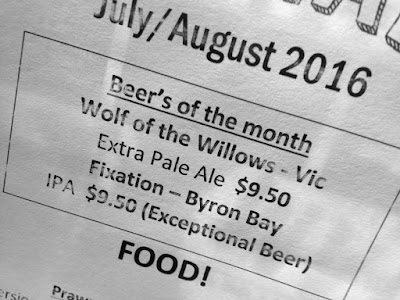 I do not fear extraneous apostrophes adding to my calorific intake. 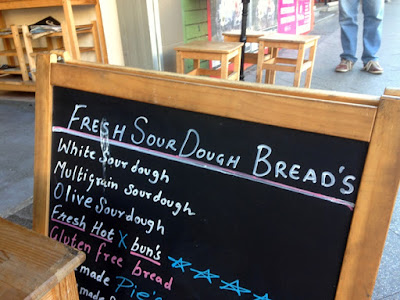 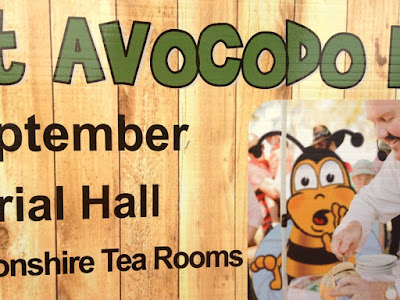 I would have thought that the famed Avocado Festival would have picked up this one. To be fair, it was correct everywhere else. I learned that there are about a hundred breeds of avocado. I can only remember two... Haas, and the other one. 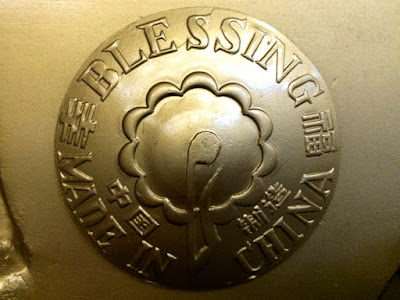 Not at all. Blessed (one syllable) or blessed (the two-syllable frustrated curse)? This event hire tuning job saw an uncharacteristic instrument supplanting the usual cavalcade of Yamaha triangles (grands). This piano had a film role as practise piano in a ballet studio. It was well-suited. A method-acting approach would have been to step away from the tuning task (or de-tune the piano a little more). That would have added authenticity.

Ballet schools are notorious for preferring shirty-shorty shit-boxes that often come from countries whose names would score highly in Scrabble if their use was permitted. Ballet schools are notorious for caring nary a skerrick for tuning, hollering only when parts or strings fail, while forbidding tuning (for reasons of tightarsery) in the same breath. I appreciate that a tight arse is a ballet asset. If you're a ballet school authority nudging your dudgeon further northward as you read - prove me wrong.

An additional frustration this day was that I had to interrupt my tuning repeatedly to be silent while other scenes were filmed in an adjoining space. 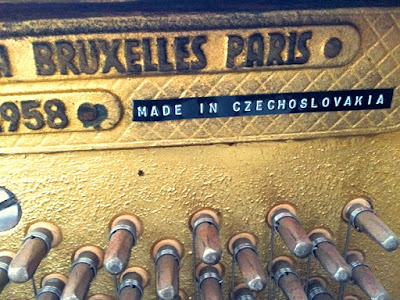 This ballet school accompanist (whose issues, again, were purely non-functioning keys, action parts and dampers) was so proud of his school's pianos' provenance that he had labelled them with Trodat typey-tape thingies! 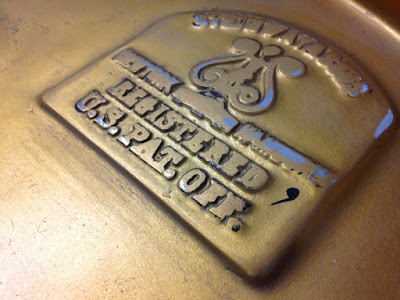 Meanwhile, in the workshop, a Steinway D frame (removed from the piano) is being readied for respraying. At last this mysterious apostrophe can be euthanised.

IMBY (in my back yard)

Flowers in my tuba