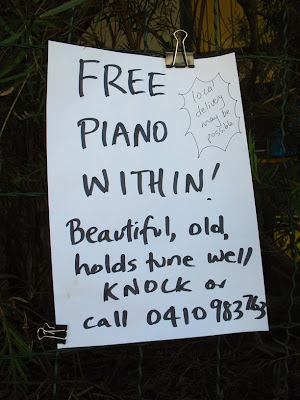 Pianos are stalking me at every turn. Here's a sign on someone's front fence in Newtown. Should I make an accompanying 'beware' sign? Should I knock on the door? Should I leave a business card in the letter box? I think I'll just reach for my camera. 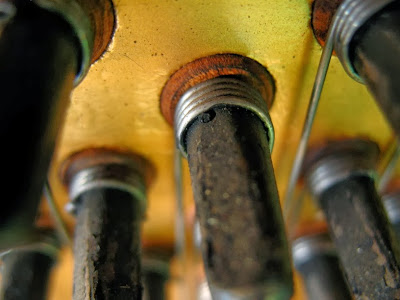 Not free, but bought for a song. Then it cost three songs to move it, and two to tune it. But observe the tuning pins (above). See how the string coils (wraps) are touching the wooden bushings where the pin emerges? This is generally indicative of the pins having been driven in further (in this case, arguably too far) to attempt to gain adequate torque to hold the strings at tension. Two-thirds of the piano's coils were up against the bushings, which made them behave strangely (not move freely). It may have been the stringer's technique, there are four wraps in many of the coils.

If you get the chance to look 'under the hood' of a 'free piano', coils with no clearance may indicate that the torque/tightness of some (or many) pins is inadequate to hold a stable tuning. Here the clients had narrowly dodged a bullet with their gamble, it tuned up quite presentably. But beware! 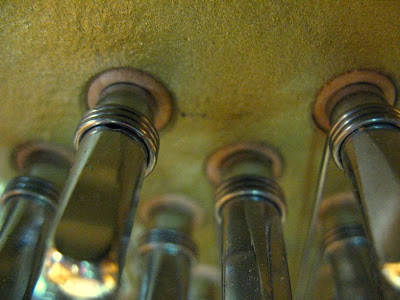 By way of contrast, here are the tuning pins and coils in a common house and garden (OK, house, not garden) Kawai K3. Reasonable clearance is 2-3mm. The hole in the pin into which the string inserts is perfectly half-covered by the first wrap of the coil - top marks in stringing school for that. 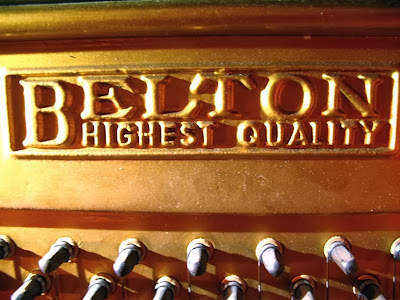 No toddler is too young to be taught not to BELT ON the piano! 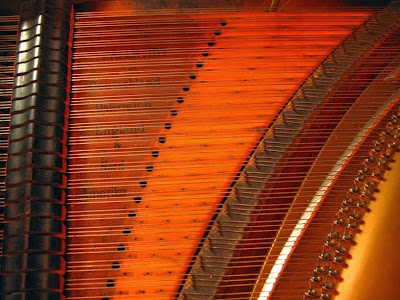 Here's an unusual feature. This Kaps grand piano has some sort of extra resonator, a hollow box with additional little holes on the treble part of the sound board. The informal term is 'cigar box' I learn. For that smoky sound! 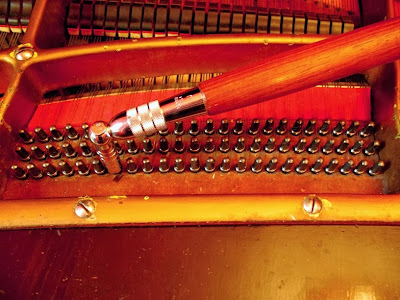 The Kaps piano has all its pins lined up like little soldiers. This piano was very much bordering on being unable to hold a tuning, particularly in the middle section (above). I could have turned my tuning hammer to release tension on each string by breathing on it. 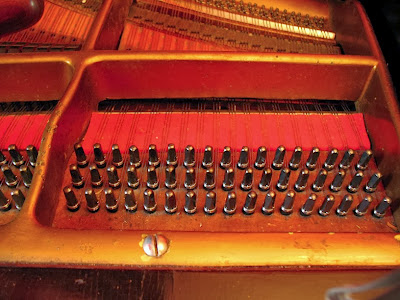 It is more common to see the lines staggered in an alternating way, particularly in the middle and treble. Staggered lines as a pin layout design protects and prolongs the life of the multi-cross-laminated hardwood plank (the pin block) into which the pins are driven. Cracks may be developing in the Kaps piano's pin block. 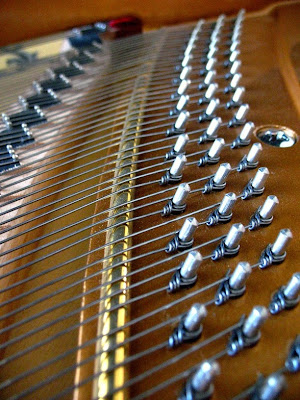 Pretty hitch-pins in a Kohler & Campbell grand. This is the other end of the string from the tuning pin. It is common for plain wire lengths to be looped around the hitch-pins so that one length of wire becomes two strings. Sometimes for aesthetics, or other reasons, individual 'eyes' are tied at the end of every plain wire string. These ones are 'double eyes' each goes twice around the hitch-pin. 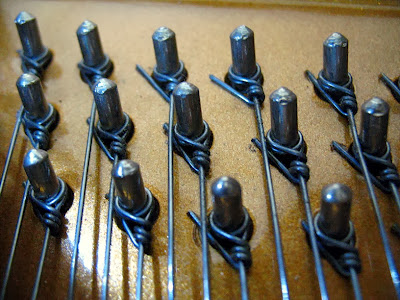 Little scarved people at a wind-swept wintry bus stop (somewhere where the cultural norm is order and conformity). Yes, I do find time to get the tuning done between flights of imaginative whimsy! 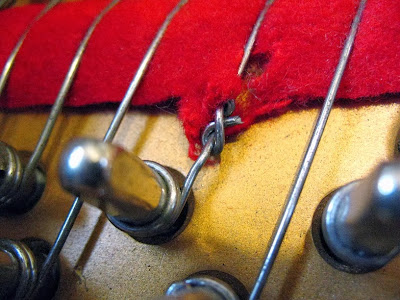 I have a fascination with splices (knots in music wire). It is the combination of functional utility as a strategy, beauty, and their very bush-mechanic-y MacGyver-iness. Cheeky and rustic, sitting there in a Steinway, in a very low bass string, where there is just one wound string per note. The splice has unavoidably cut into the listing felt as the string coil was made and the string brought up to tension. Perhaps I'd be less fascinated with splices if I were more deft at making them... 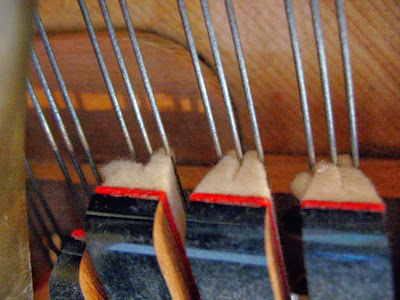 I leaned over and looked back (almost upside down) to document the rear ends (furthest from the keyboard) of these Steinway O 'W' dampers (aka 'split V' for pedants). They're a bit mashed, yet incredibly they still damped 'well enough' not to draw undue attention - so they can wait. The middle of the three clearly visible above looks OK. It's the others that have somehow met with ill-play, which could be as simple as careless 'dusting'.

It is invariably better to consult a piano technician if you are wondering how you might dust or clean inside a grand. It is easy for dampers to be misaligned, especially here (at the bottom of the treble bridge) where there is much necessary compromise in their size and position. And the 'W' is the most unforgiving of all dampers (for not tolerating misalignment). Observe the further lowered damper on the very left - it has been designed that way due to limited space. It is already smaller, closer to the end of the string, having a hard enough time doing its challenging job - the last thing it needs is a king-hit from the cleaner. Keep the lid closed as much as possible to protect the beautiful insides of your grand piano. 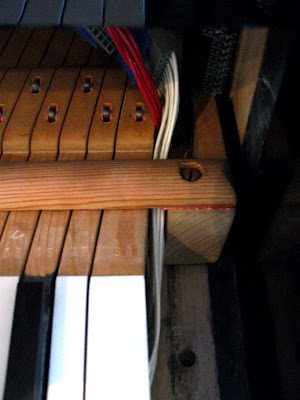 Oooh, what's going on here then? Some sort of weird cabling... 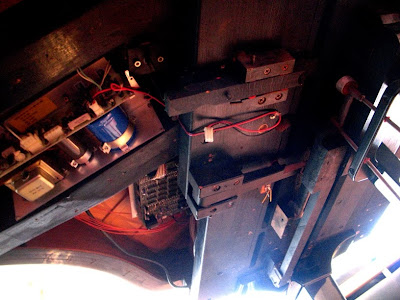 Everybody out - it's a PIANO BOMB! No, it appears to be the
fixings for some elaborate electronic automation, not my bag, baby!

P.S. The pedal lyre struts are missing - I think the bomb squad took them. 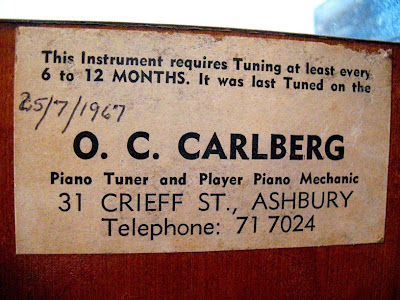 I'm glad we're all up-to-date then! 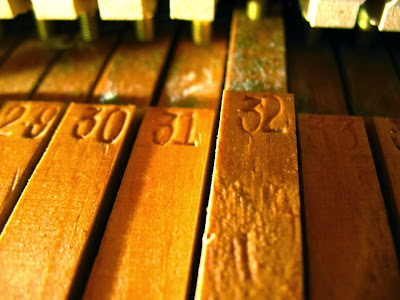 
Piano keys are numbered from lowest to highest, 1 to 88 on a modern keyboard (1 to 85 on many elderly instruments). In piano 'keystick notation' A1 is the lowest note and C88 is the highest. In scientific notation these two notes are known as A0 and C8, where each octave beginning on C has its own number.

OK, disregard science and let's get back to keysticks.

Where A1 and C88 are the extremities of the piano keyboard, Middle C is C40 (not really the middle). On this unusually runty piano, low of height and pitch, (pictured above) I am playing the note Middle C. On this piano it is note number 32!

All I can say is that I was kind of glad of the 'free kicks' the missing notes gave me, because I was pitch-raising and tuning this instrument, to then madly rush to lederhosen duties in mock Bavaria. I was not wearing lederhosen as I tuned, but on this occasion it may have streamlined things. Instead I change clothes in the car (not while driving). At the lights is fair game. A once-common occurrence was dashing from one ad hoc little band to another with various uniforms or dress codes. You know you're a busy musician (in that scene) when the major intersection squeegee beggars descend on your windscreen and you're making demonstrative 'no' gestures for two reasons... the second being that you're sitting there in your underwear! 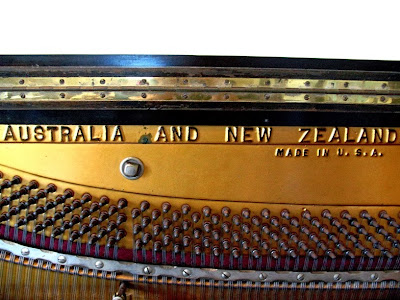 We ROCK according to this old Victor Palings. Ooh, purple! 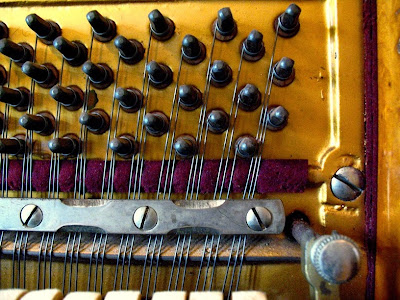 The Victor again. Purple! If I had my way, there'd be no red and green in pianos, just purple. Red is all right, so is green - it's their interminable combination, just so bloody Christmassy, that rankles. But I can cope!