Putting pianos out to pasture

The twilight zone. I have grave concerns for these upright actions. 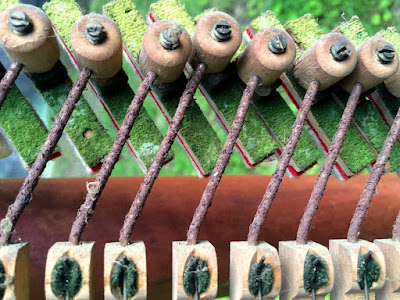 I don't mean to put a dampener on things, but unfortunately the fine line between piano life and death is not always this obvious. 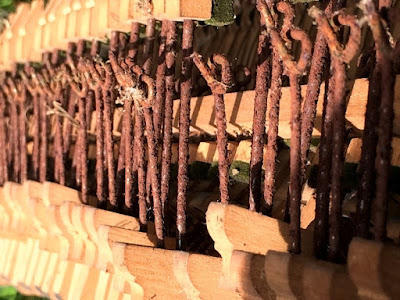 With the old dear in the 'good room' (I mean the piano, not the client) it's often a grey area. It's more like Fifty Shades of bloody-long-circular-rants-about-the-economic-reality-of-the-necessary-restoration-work.

In short: Are you prepared to spend several thousands of dollars to restore a piano that may, at best, then be worth several hundred? If so, it can be done. But, particularly with uprights, it can rarely be rationalized. 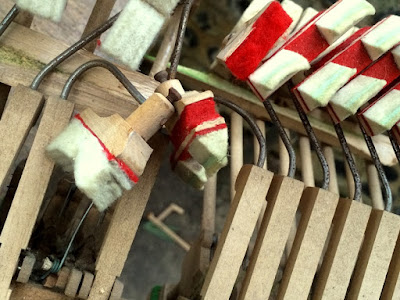 How sweet, two dampers who love each other very much. 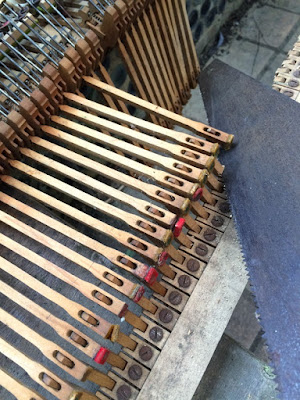 I begin dismantling dead actions with all the earnest unscrewing one deploys when servicing pianos, where precision threads cut into wood must be carefully protected at all times. Nothing screws with your mind more than piano screw-work. But then I realize that I can go all Gunther von Hagens in ways not normally possible. He's that bloke who does live autopsies. Live autopsies, Cazzbo? Oh, I mean educational autopsies on those who have donated their bodies to science, before a live studio audience. 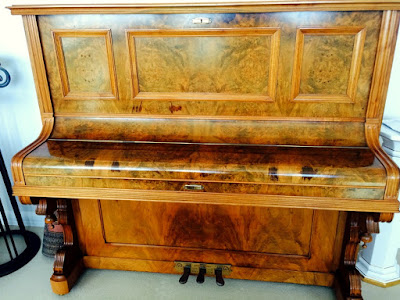 Out in the field (by which I mean inside a client's home) we witness a stunning cabinet. Burr walnut veneer, with the characteristic careful attention to the symmetry of the grain orientation. Notice that this piano has a lid lock visible on the upper front board. 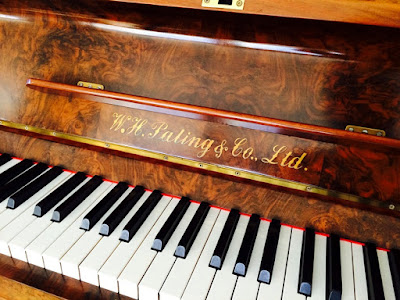 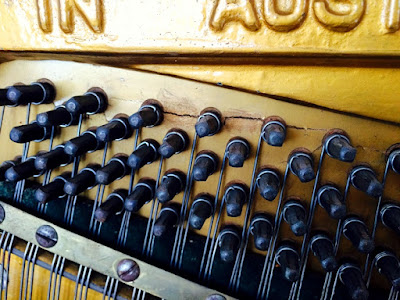 Observe the cracks in the pin block that seriously compromise the tuning pins' ability to hold the strings at the necessary tensions. 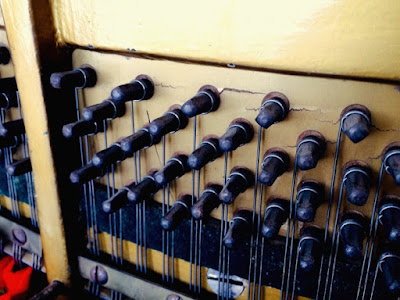 Most pin blocks are concealed by the piano's plate (or frame) design, so a pin block failure will not usually be visually obvious - but it will be obvious to a piano technician. 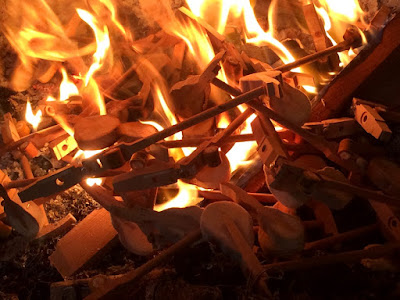 I can't hammer the point home more strongly (except by sharing more piecemeal piano cremations courtesy of the Caped Regulators' wonderful winter workshop de-cluttering sessions). It can be difficult to dissuade clients from delusions that their piano can (or should) carry the family legacy, when it presents like this...

These four photos are the ones the client sent for the Caped Regulators to appraise the family piano. 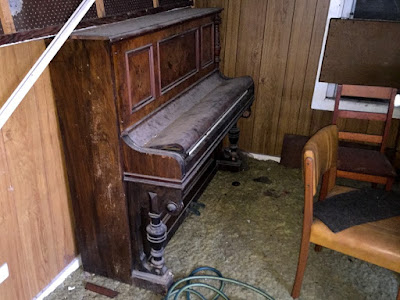 Once the dust of sibling bickering about who had let it moulder had settled on the piano, an enquiry was made. 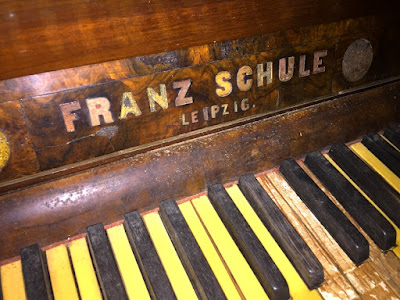 Photo two. Schule you're kidding, and don't call me Shirley. 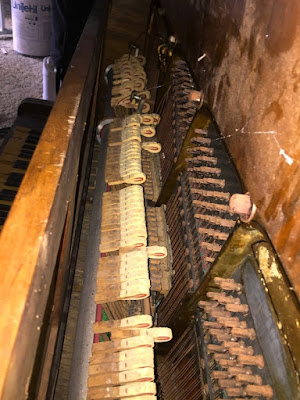 Photo three from the client's gallery. 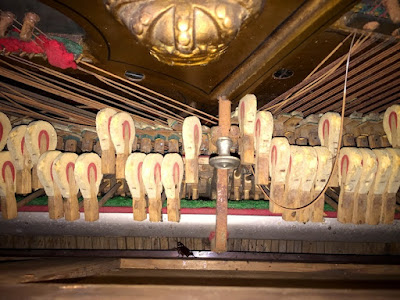 Photo four. A spaghetti of broken strings and myriad hammers not at rest. Dire diagnoses at a glance. Even the cockroach in the bottom of the shot has complained to the Department of Piano Housing about his inferior digs.

Nevertheless a plan is formulated, a sentimental salvage. The client decides he'd like the keyboard, the fallboard, the upper front board and a few other turned filigree-style wooden bits and bobs. 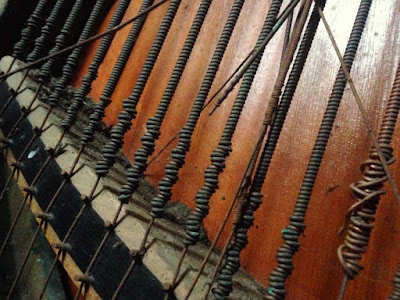 We trek outside of Sydney to witness the dead piano live. The room it's in is similarly degraded, no power, dank, with a nearby roof collapse - admittedly those were the results of recent storm damage. 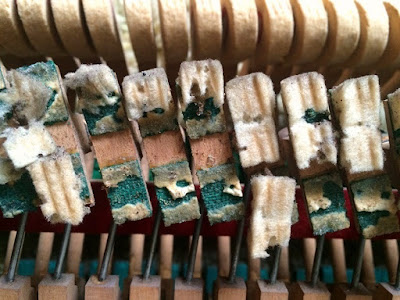 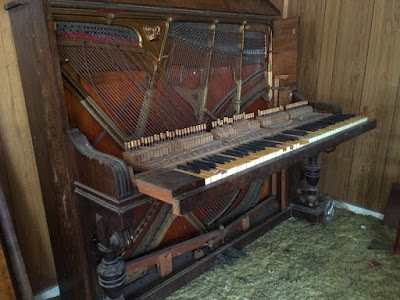 We remove all the keys and perform an archaeological exploration to determine how and where the key frame is attached to the keybed. The rusty screws relent and viola (sic) we've created an upright where the keys slide out just like a grand - now that's gotta be worth money. No. 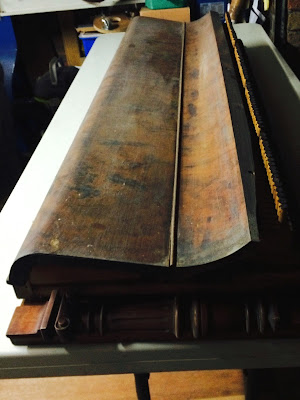 Back in the workshop the salvaged parts rehearse for their 'open casket' moment. The full keyboard on the key frame is under the fallboard. 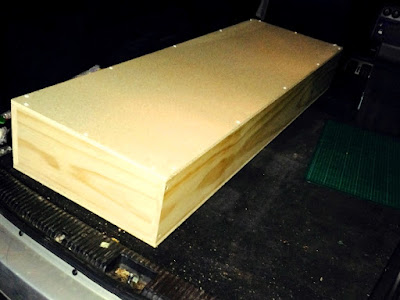 My partner in piano pampering had undertaken to make this stylish wooden box. The car is loaded and we're armed with tools to unscrew the lid fixings ready for the viewing - now that's putting the hearse in rehearse. We deliver the booty to the client who can now let these bits moulder in storage, until some other creative plan is hatched, or it's acknowledged as never going to happen. 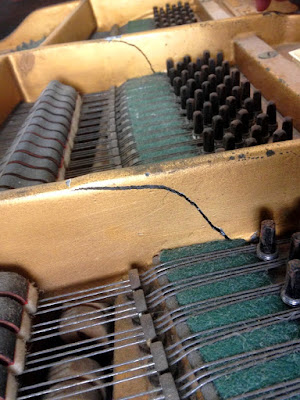 Certain Bechstein piano plates (frames) are prone to cracking. Here we find an all-but-terminal failure. Repairs to such structural elements (in less severe cases) might be attempted, but the results are uncertain and cannot be guaranteed. 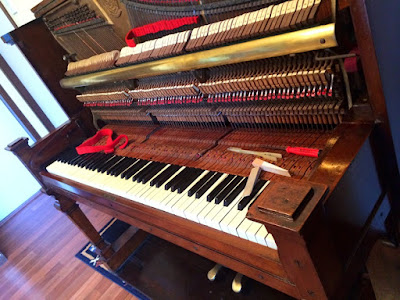 This Rönisch piano's cabinet has been adapted to suit the sub-continental stylings preferred in Sri Lanka. 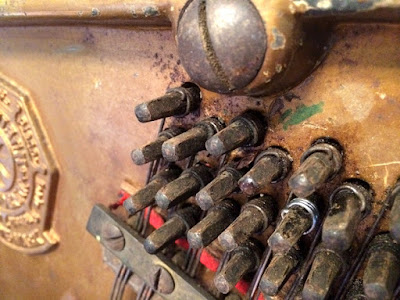 It's a slippery slope. The regal Rust-afarian is effectively untuneable. 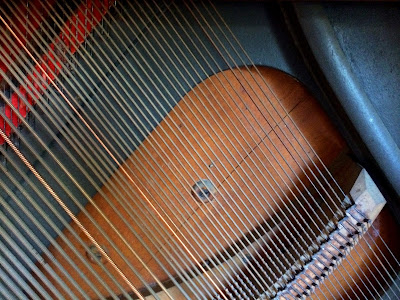 Ventilated vibrations - cracks in the soundboard. When pianos are restored, restrung, rebuilt, such soundboard cracks can be (and are) carefully shimmed with spruce as part of soundboard rejuvenation. 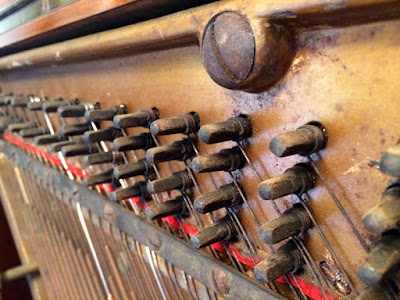 The Raj Rönisch lives on (in blog form) but its days of making music are over. 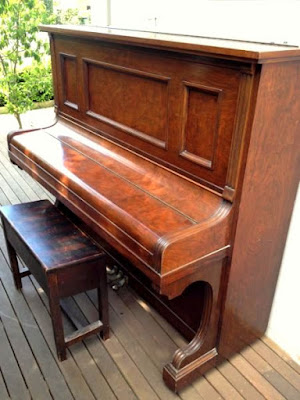 Seen on Gumtree. It seems that pianos get evicted before they get advertised. None of it augers well. 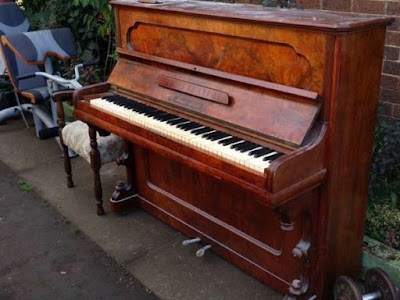 Another Gumtree piano was late with the rent and has ended up in the gutter. It is nestled between a gym's worth of exercise gear, as though all the failed New Year's resolutions have been collectively ousted. 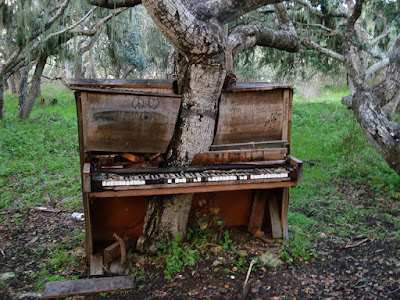 What, Gumtree again? I admit I don't know what sort of tree that is. But... beware of free pianos - this time I really meme it! 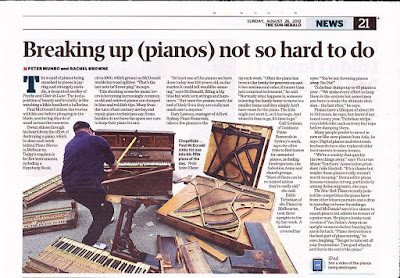 Read it and weep. The sad facts.

P.S. My career is not perpetually in the gutter (or on the tip) I do encounter respectable pianos that a tuner needn't carp about.

Pianos: Painos (not a typo)