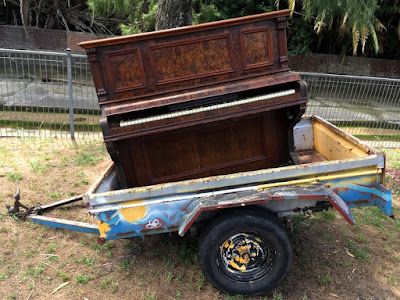 This is a trailer. This was a piano. Is it a mobile busker rig? It no longer sparks joy? My mate spied this local 'installation' or illegal dumping. Had I seen it? No. But I must, this minute. En route we discussed the dangers. Kids could meddle, the whole kaboodle could tumble. Outrageous. Won't somebody please think of the children? 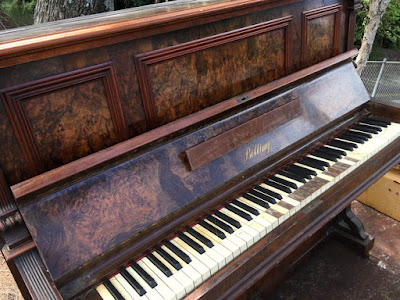 I was beguiled by the scene. Somehow my dudgeon melted away. That's uncharacteristic, because I am a fretful worrywart. Let's face it, I reasoned, kids never play in the streets these days. What would it take to bring kids out into the streets again? Trailer pianos, perhaps? Bring back fun. Bring back latched doors on discarded refrigerators, I say. I'm kidding, I'm kidding. 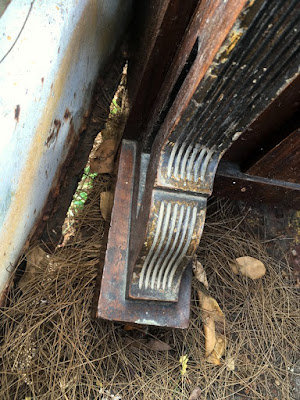 Daylight glints where the floor is no more. I have it on good authority that the trick with such trailers is not to let the registration lapse. Neither trailer nor contents would pass any type of inspection. 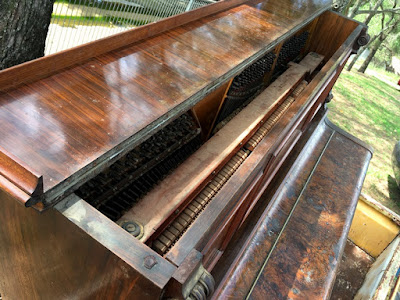 To seal the deal that this load qualifies as 'hard rubbish' we note that it's an overdamper. They ride tall in the saddle when anyone compiles a list of pianos to avoid. 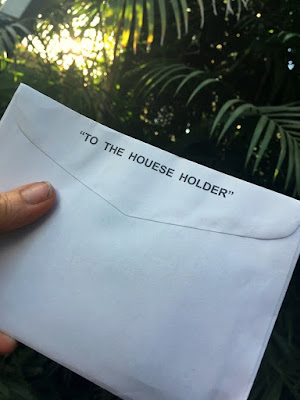 Is it about my dumped piano? Kidding, kidding. I hope it's not from my local member. 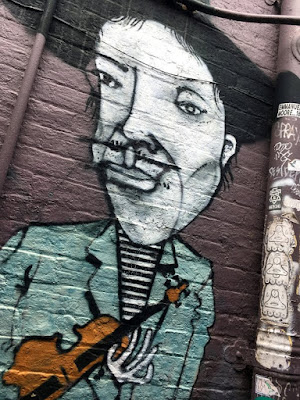 Up a laneway. He looks like Django but he's holding a violin. I'm confused. 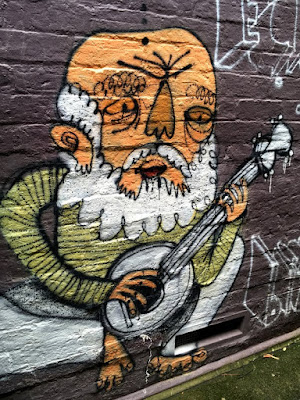 He looks like Jasper but he's holding a banjo. I'm confused. 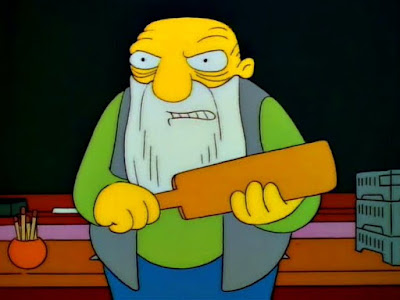 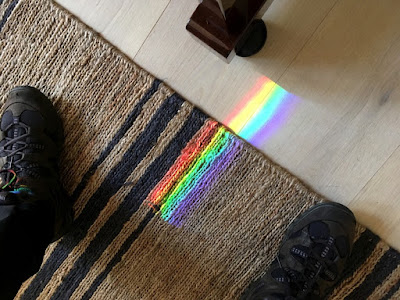 No filter (and no hashtag). There really were rainbows travelling across the room (and the piano) as I tuned. The nearby windows were two-part sliders with naked glass edges. The sun catching those edges is the trick. The windows flanked glass doors leading out onto a little deck. Almost a wall of glass. As I tuned I contemplated suggesting that the piano should be on another wall in the room. I lobbied gently. Next time I tuned they had rearranged the room and made it so. Wonderful. 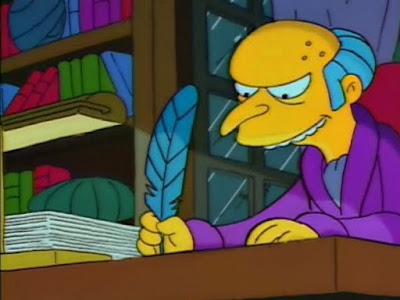 After a health scare Burns is prompted to pen (or quill) his memoir...

In closing, Gentle Reader, I'd like to thank you. What's that you say? Me thanking you? No, it's not a misprint. For you see, I enjoyed writing this book as much as you enjoyed reading it. The End. 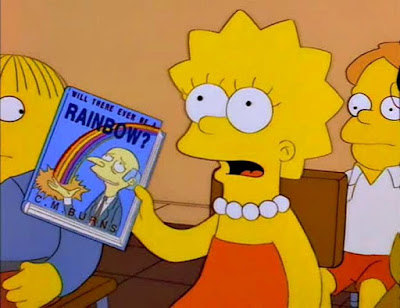 The title? Will There Ever Be a Rainbow? 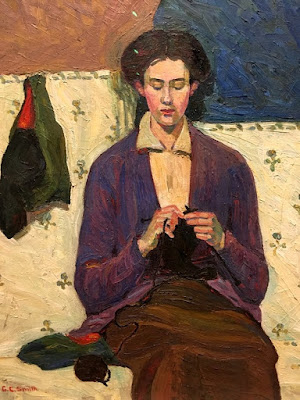 The Sock Knitter by Grace Cossington Smith. This work could be titled The Alto In Rehearsal based on every choir experience I have had. With a name like Cossington, who needs Smith? 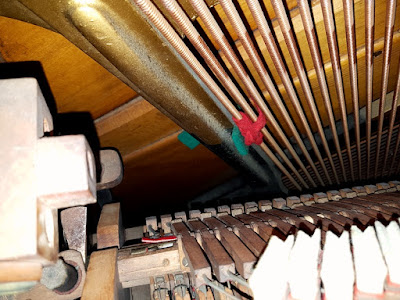 Did Ms Smith knit a scarf for the lowest A string of this piano? Here we see the action tilted back away from the strings. The dampers (looking whiter-than-white in harsh iThing light) are in the lower right hand corner. With my guidance, Gentle Reader, you may be able to notice that the lowest damper is missing. Hence a past tuner has fashioned a cloth swaddle to mute that string to prevent it (and all its overtones) being sympathetically agitated by any other playing on this piano. 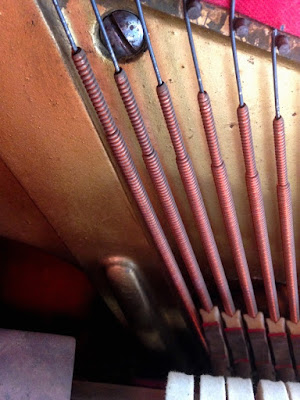 The action is in position, low A still comfortable with its scarf. Note that the lowest strings in a piano are double-wound with two layers of copper to add mass. Shitty short pianos often have triple-wound strings down the bottom. Did someone just say shitty bottom? 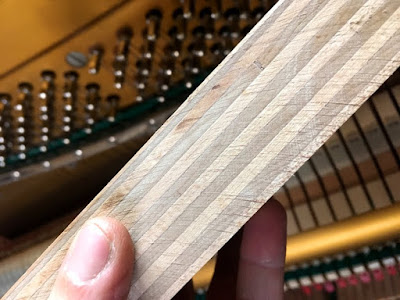 Tuning pins go through a piano's cast iron frame into a cross-laminated hardwood plank. We don't often get to see quality pinblock wood. In older pianos the wood has shrunk and sometimes developed cracks. Tuning pins become too loose to hold strings at pitch. Many pianos that folk think 'just need a tune-up' are compromised in the pinblock. If the piano is maintained and kept in a stable environment the pinblock will age but still be viable for many years. If a piano is neglected and positioned in volatile places in the room or house the degradation of the wooden (and other) components is much speedier.

Poorly-made new pianos often have pinblocks with too many laminations and therefore too much glue. Wood can be poorly selected, poorly seasoned. The quality of the metal in tuning pins also varies. An entry-level piano can look blingy but be bordering on unserviceable. Restrung pianos may suffer from too-large an increase in tuning pin diameter resulting in excessive torque on the pins. Stringing technique also influences the resultant torque. OK, that's enough of the torque talk (for now). 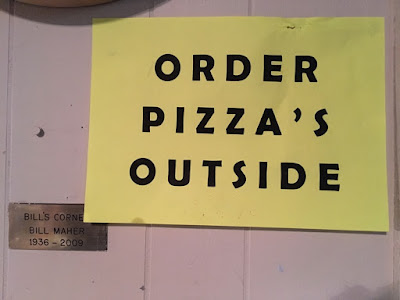 Extra(neous) topping on the pizzas. Order pizzas outside the conventions of pluralisation. 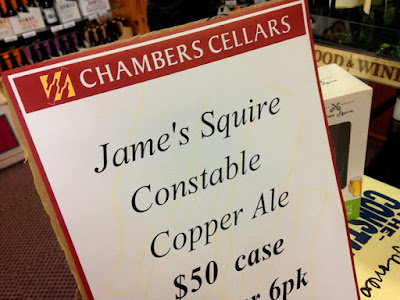 And to accompany the pizza? Is this errant apostrophe enough reason to boycott this booze? We'll see. 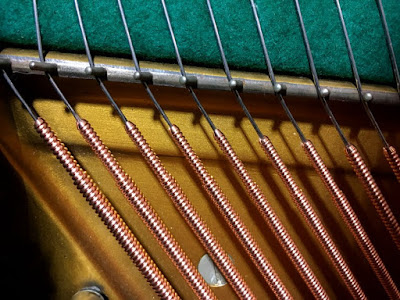 This Yamaha U3 has been restrung. We see the piano's lowest strings. The high-carbon steel core wires are wrapped with two layers of copper wire. The wraps end at very specific points. 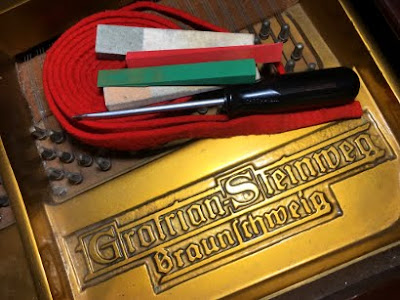 A Grotrian-Steinweg grand. It's simpler to refer to it simply as a Grotrian to avoid confusion. Folk can go a little crazy around the 'S' word. When Grotrian-Steinweg entered the US market, Steinway sued to prevent them using the Steinweg name. There is a connection. Heinrich Engelhard Steinweg became Henry Steinway after his emigration to the US where he founded Steinway & Sons. 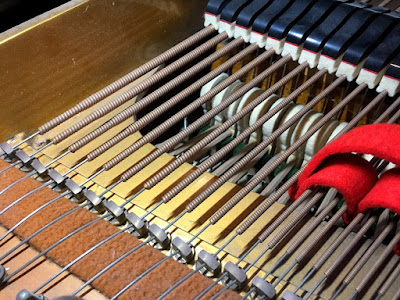 The strings in the Grotrian are older. Over the years dust builds up in the crevices between each copper wrap and strings will sound more dull. Don't touch your piano strings, it ain't a banjo. Random touching of piano strings - you'd better believe that's a paddlin'. 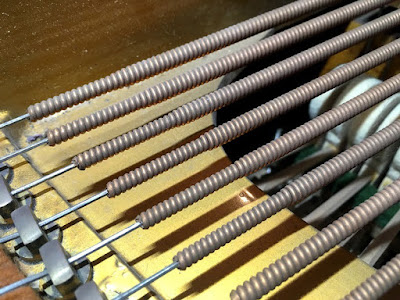 No obvious rust, that is refreshing. Did you know that Steinway patented the double-wound string in 1859? Well, you do now. 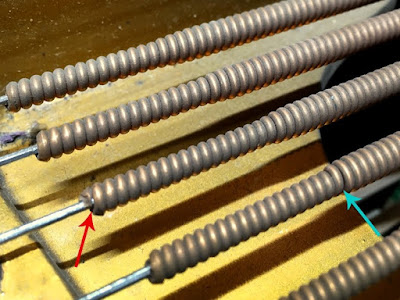 Vibrations may eventually cause the windings to loosen. This will affect the sound of the strings. In extreme cases it can add a subtle percussive sizzle to the sound. Embrace or replace. 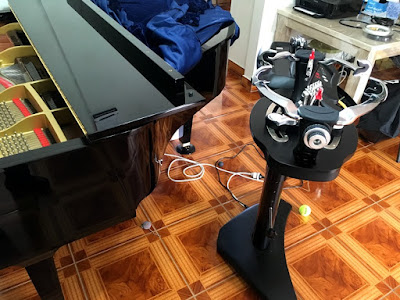 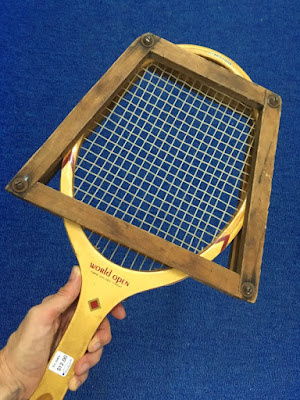 Spied at my local Vinnies, not purchased. Remember when tennis raquets required clampy-jiggy things to prevent them from warping? Well, neither do I, really, but I remember wooden tennis racquets. Wood is affected by humidity variations, it changes and can warp. Pianos are crazy machines full of wooden parts.

No one is playing on wooden tennis racquets nowadays. Increasingly the machine parts in pianos will be carbon fibre and not wood. It makes sense. There is already significant penetration of good quality non-wooden action parts, blended with traditional wooden parts in areas where they are perceived to influence the piano's sound. 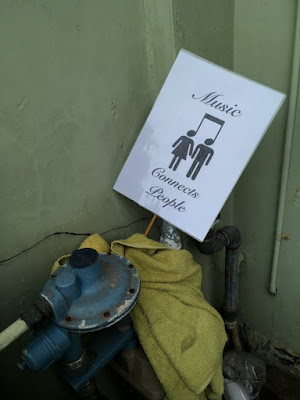 'Music connects people'. This sign, seen on a front verandah, appeared to be on a stick ready to be carried on a street parade or protest. Intriguing. Where and how was it used? I'd campaign for music, but against muzak.

Check out some other bloggy bits...