Fergus swept me off my feet! 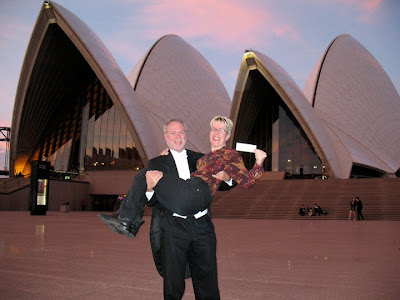 -
I had the great privilege to score a wonderful ticket to the Berlin Philharmonic Orchestra's perfomance at the Sydney Opera House Wednesday November 17. I was able to catch up with one of the horn players in the orchestra, whom I met in Toronto, Canada in June (where we were both 'international guest artists'). So, we caught up for a coffee, I was able to attend the pre-concert rehearsal (as did a few school groups... that's how generous the orchestra and Sir Simon Rattle are!) then I got a last-minute-released VIP ticket. Thanks to the wonderful Fergus McWilliam (pictured).
-
I wrote at the time, "I thought I might have forgotten what an orchestra sounded like (I hadn't, BTW) but in any case it is immaterial because I have never heard anything as incredibly compelling and electrifying as that performance. I don't think I could be bothered hearing another orchestra now." (That's how I felt!!). Stupendous! The programme was Rachmaninoff's Symphonic Dances and Mahler's First Symphony.
-
Then beers and Margaret River red afterwards - perfect!
Posted by CAZZBO