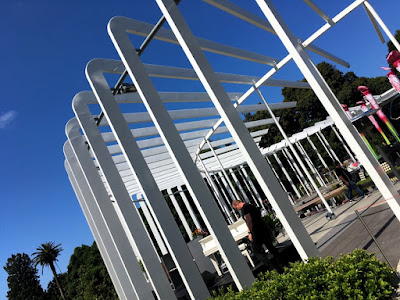 The Calyx is a structure in the Royal Botanic Gardens. I knew neither what it was nor where it was but I know now. There are function rooms adjoining where I rather hoped the piano might be. 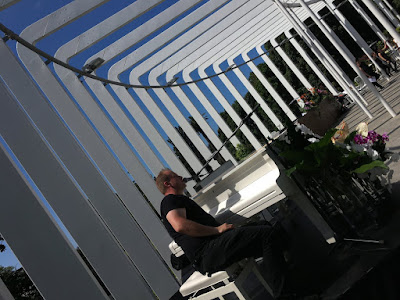 No. The piano is copping a stripey dose of blazing sun... 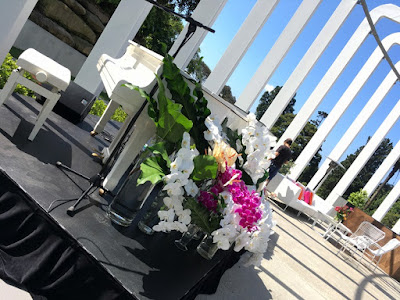 ...flanked by an imposing posy. Just another crazy challenging environment. It's my job realistically to make it work. I swiftly tuned (to minimise exposure of the soundboard and strings to the sun). It was intense. I worked wearing my shirt as a hat (I had two shirts). 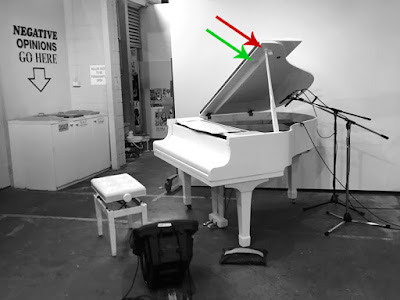 I arrive to find the lid up with the propstick wrongly located and the music rest backward. In my continued attempt to educate the masses, the red arrow is wrong (that cup is for the short stick) and the green arrow is the correct position. I see they're preparing microphones, fair enough, but still it irks me how often folk (waitstaff and randoms) will instantly open the piano lid on its arrival. Gah. 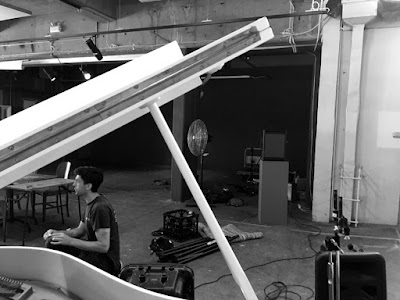 I correct the propstick position and educate the crew without (I hope) insulting them. 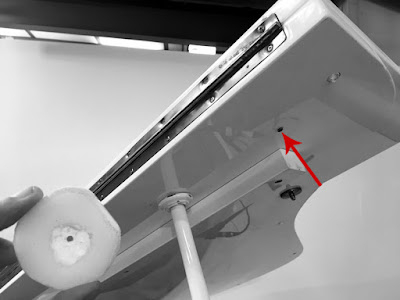 I conduct an experiment by removing the wrong-for-the-long-propstick cup. This locator cup has been cunningly (or desperately) fabricated out of a cut section of a plastic chopping board. A perfectly functional improvised replacement/repair (not my work). Removing a cup is not a long-term solution. I am not sure what is. Some pianos have the propsticks beside each other, meaning that the different locator cups are offset, and only sensibly match with their relevant stick length. This makes it impossible to get the locator cup choice wrong. Elegant design indeed. 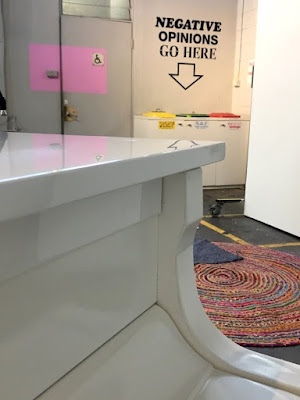 Is this art, or a genuine place I might lodge a written grievance? I think they are actually bins, but the reframing of them as receptacles for thought is art, erm, I think. 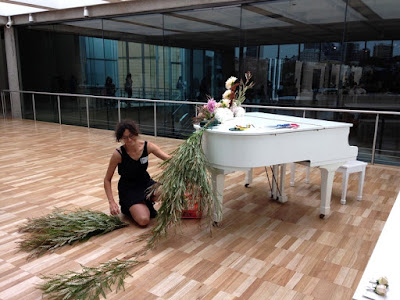 I turn up at my appointed time and find the gussying in full swing. 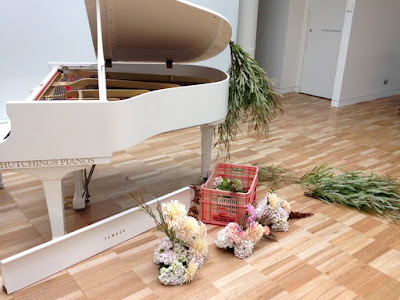 The next step is always to explain that I'll need to open the lid and remove the fallboard and music rest to tune. 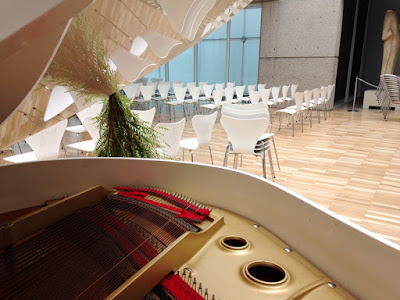 That ponytail posy was firmly attached and could hang on for the ride. 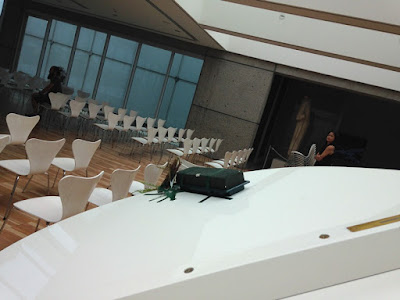 I document the foam flower-arranging 'brick' taped to the piano's lid. I might as well. What if something comes of these shenanigans? 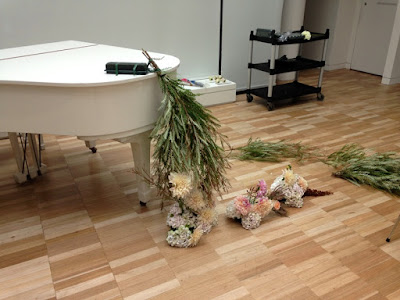 I farewell the scene. At least these sprigs and blooms don't appear to have just been plucked from buckets of water. 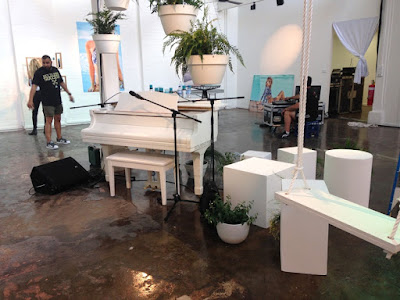 At first I thought this floor was wet, but it was just shiny. The joint was still a bit of a sweatbox. 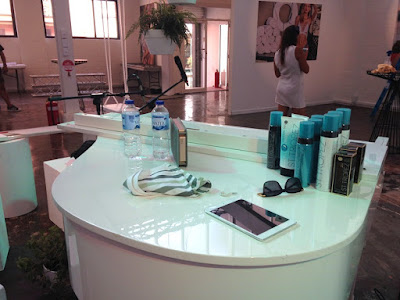 Not only is the product line already installed on the piano, but it has become a table for personal effects and discarded water bottles. I systematically move the items. 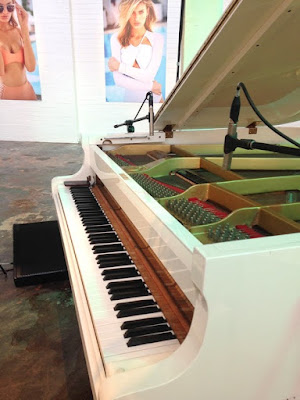 And now for the important swimsuit section of the tuning (judging by those images). Microphones positioned ineffectively. Not my problem as long as I can swing them out of my way while I work. If I'm asked (which I often am) I will advise on microphone positions but not swimsuit models. 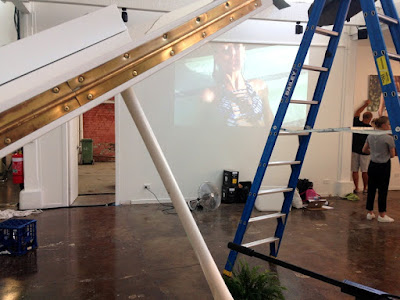 I beaver away while observing the typical flurry at such events coupled with almost-porn broadcast on the white walls. This client had initially requested a ridiculous fleeting flat-earthy fashion in pitch. The aditional fees quoted (for an inadvisable pitch-lowering of the piano and to return it to Concert Pitch after the event) scared some sense into the client who was happy to accept A440. 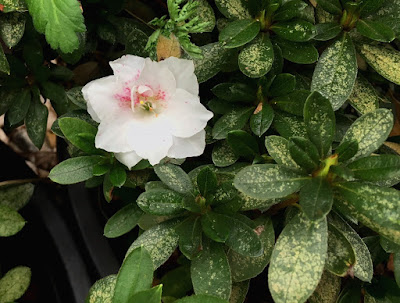 In keeping with the white theme, here's a little azalea bloom from my garden. After tuning in a quaint street full of 'em, I sought out azaleas. I bought a huge potted collection from a random Farcebook Marketeer who was vowing to move house. They're not supposed to bloom in autumn, but some are a little confused. I can't wait until they burst into an array of surprise colours, if they ever do. The leaves seem to be sporting some sort of blight. Gah. 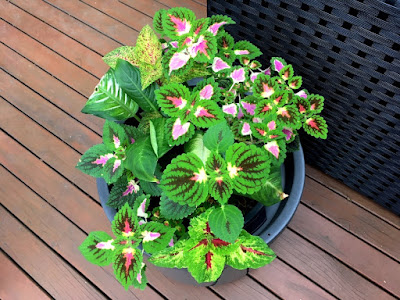 Gardening continued, propagation success. This lot was ostensibly borne of a single coleus sprig that was poking through a picket fence. The collection has expanded. Hey, not bad for a brown thumb, eh? Fingers crossed. 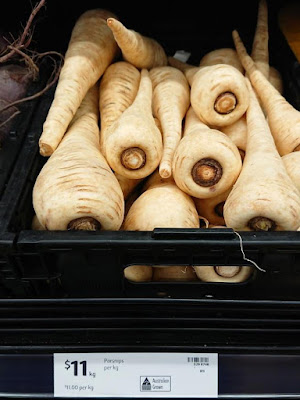 Loosely white-themed. My mother spied this jaw-dropping price per kilo for ghost carrots recently. $11? Get out! This calls for parsnip parsimony. It's only worth buying such foods if they're cheap. Ridiculously cheap. It could almost make me want to grow vegetables. 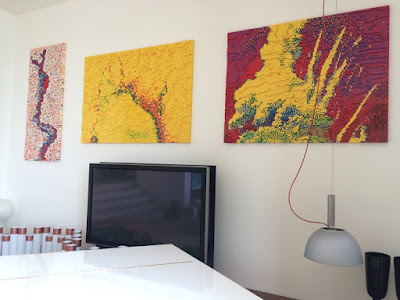 Big Whitey (a Yamaha C7) was schlepped down 50 steps by five men into a private house. The house was astonishing. The owners were saying, 'Oh, I wish we had a piano there all the time. Wouldn't that be wonderful?' Listen, you're rich enough to have this house and this outlandish party for your teenage daughter, you could easily have a piano there all the time if you wanted to. I reply with a highly abridged and watered-down almost-hint at that idea. That's Lego art on the wall.* Three-dimensional and hard to do photographic justice. 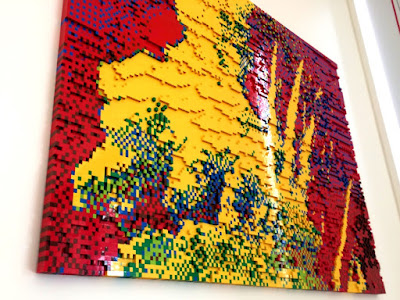 I don't know much about art, but I know I wouldn't like to tread on it barefoot. 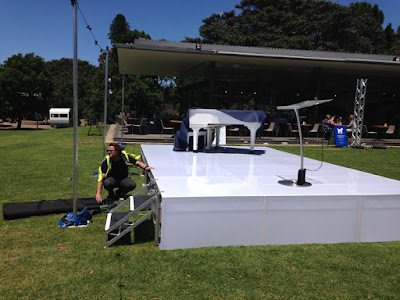 Another blazing sun day. I arrive to find the piano cowering under a horse blanket.** The horses have bolted. I border on bluntness with the organiser. 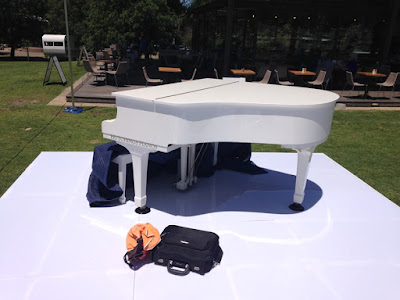 It's midday. The concert is in the evening. That is a lot of change for the piano to endure. These situations are fraught. I tuned with my bicycle helmet on, because I have a fluoro legionnaire affair that I fashioned to be unfashionable (but somewhat sun-smart). 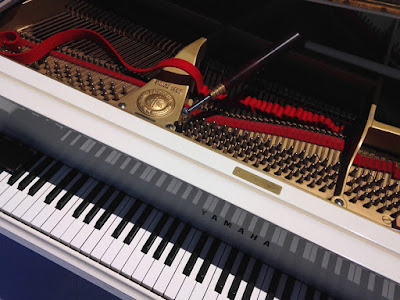 It pays to be able to quickly assess the piano aurally and determine what type of tuning I'm in for. One must work swiftly for the sake of the piano, then liaise with the client about how best to protect the instrument and the tuning until the event. I will usually make myself available for a touch-up tuning should it be deemed necessary. 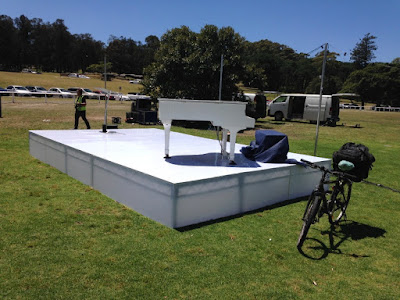 I decide that the best piano care recommendation is to leave the blanket off. It's one of the few times when being a white piano is a distinct advantage. The navy quilted blanket was retaining a lot more heat. Gah. 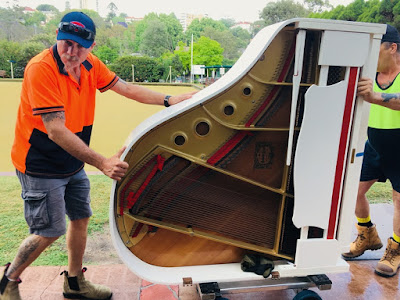 What white through yonder window breaks? It is the east? Yes, Double Bay Bowlo. 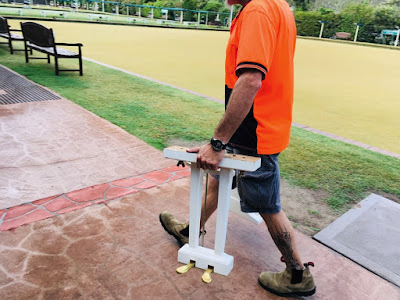 So the show's indoors, right? Don't make a liar out of me. Liar/lyre (that pedal bit is called the lyre, you see). Deliciously punny, Cazzbo. The piano arrives late, the breakfasters arrive early, next to no time to tune for an international performer who was worthy of a less weddingy piano and a less 'red-eye special' performance time. Me too. 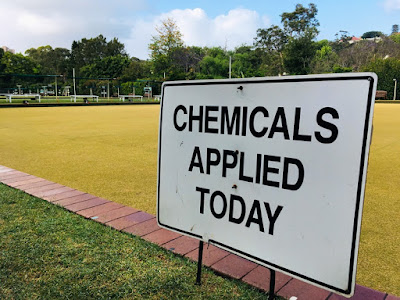 * What? They can't afford real art?

** Not really a horse blanket.

Pianos: A mug's game (not really)

Pianos: The garland is always greener

Pianos: A bridge too far