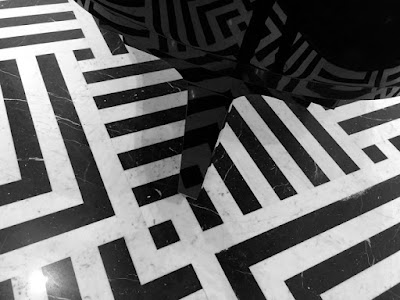 Event tuning provides constant interest. The piano has been hired for a party in a private house. Look at that floor. Marvellous. Marble-ous or marbleous? Hyphenated or non-hyphenated? 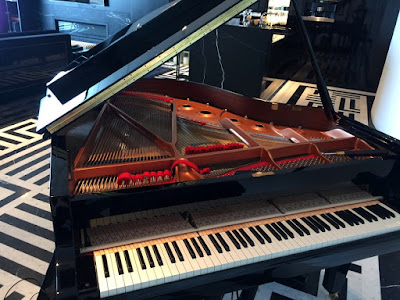 Your marble floor pattern, is it hyphenated or non-? The house is astonishing. Views, views, views, a floor-to-ceiling glass-fronted wine room and a car lift with turntable. Yes, I mean an elevator for the car. You drive out of the lift, which has doors at each end, onto a circular platform which is able to rotate. Twenty-point turns are for the hoi polloi, baby. The lift was convenient for the installation of the piano.

My main liaison is the House Manager. I love your house, I coo, upon being caught trying to photograph the beachfront bluff views and the many limited-edition photographic posters of iconic bands. Oh, it's not my house, he said, then gave me the lowdown on the geographical features we could see. I've lived in Sydney for two-thirds of my life but still barely know half the more significant harbour nooks nor pointy bits. This bloke knew every pimple and pock-mark visible from the expansive floor-to-ceiling glass frontage. Impressive. 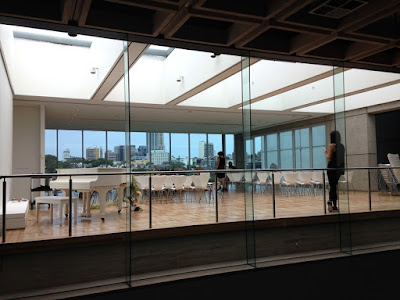 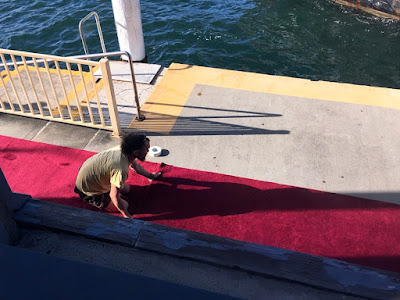 I look out the window beside the piano and witness the red carpet being rolled out. Will you vote for my single-issue political party 'All Jetties Should Be Carpeted'? No? I suspected that would be your answer. 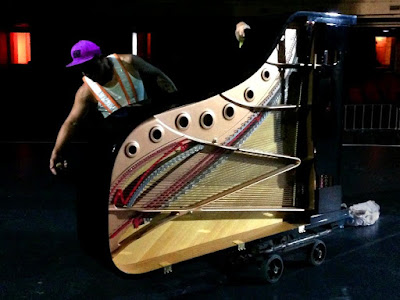 Shady manoeuvres. On a technical note, correct orientation of the caster wheel is important when 'dropping'** the piano from vertical to horizontal. He's positioning the caster. Don't move your own piano. Get the experts. It's worth it. 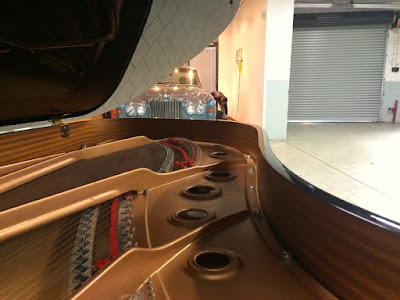 Sydney traffic, eh? Am I preparing the piano for a garage band? 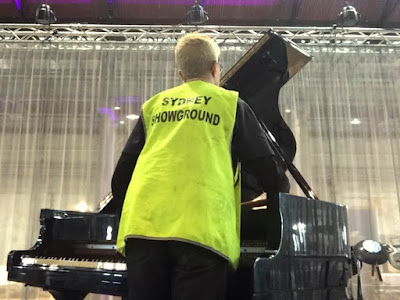 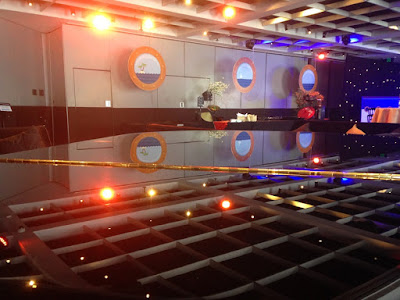 A cruise for landlubbers (ship-themed décor). We're still near the water because every wharf has morphed into a function centre. Sometimes I tune on actual ships. The procedure for boarding is almost like leaving the country. 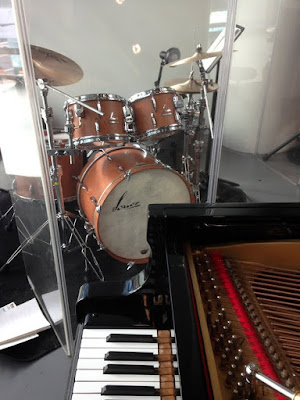 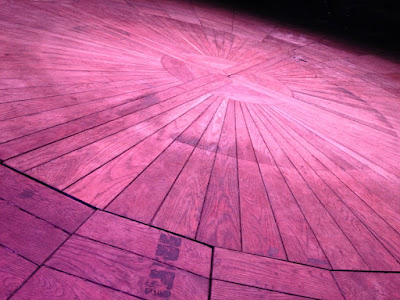 The wooden wonder of a spiegeltent floor. My view from the stage. 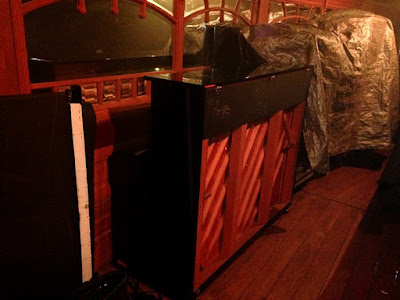 I return for the next tuning to find the piano has been relegated to the 'naughty corner'. Well, spiegeltents don't really have corners. I have to do some moving before I can hope to shimmy in and tune. It was nicer onstage. 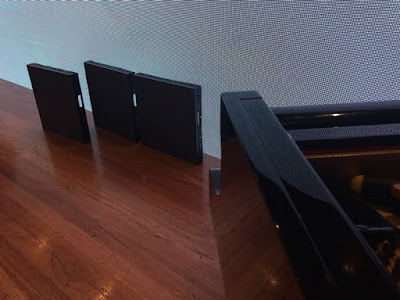 Different day, different dollar. As I tune a bloke is assembling a giant screen behind me. 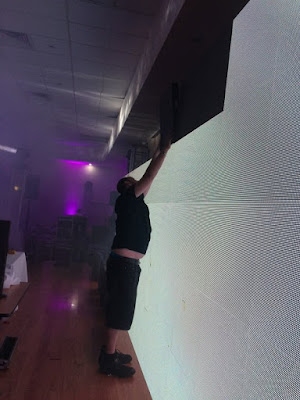 My view from the piano. 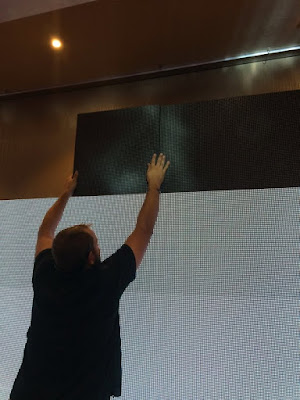 Another cheeky snap. He then set about replacing individual dud pixels. That (like piano tuning) is fiddly-diddly work. 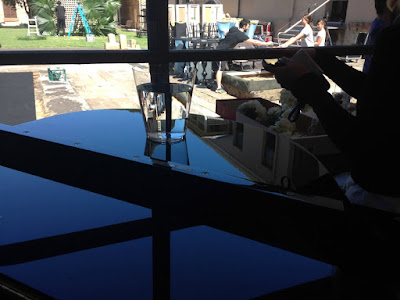 I arrive to this scene. Gah! 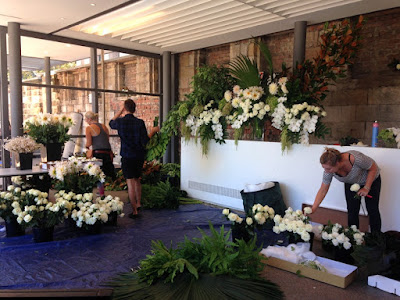 The view from the piano of just a small section of the voluminous kaboodle. The halls were decked with an abundance of blooms destined for installation. I drop a few hints about what should or shouldn't be placed on the piano but suspect that my words won't be heeded. 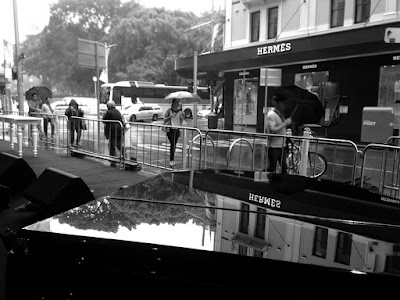 Durning Australia's gold rush the levels of wealth had peaked by the time that every city street corner had a grand piano on it. Rain, hail or shine, prospectors could belt out the Gold Diggers' Song, then segue into something a bit more mellow. Nah. I'm pulling your leg-iron. Monochrome fun can only go so far to evoke the days of yore. Back then there were no crowd-controlling barricades, plastic bollards nor trendy bicycle racks (not my bicycle). And shops had sensible descriptive names.

The job sheet listed David Jones Market Street. I presumed the piano would be installed somewhere in the store. Instead I find it really is on Market Street. 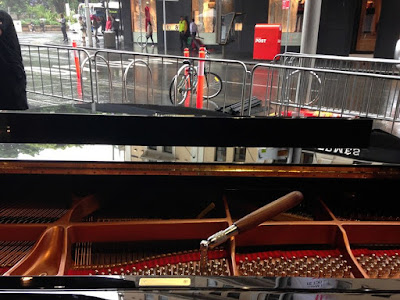 It is raining. We are under a verandah, but it's squally and windy, with moisture spritzing its way in and onto the piano. Madness. Work with speed and lid down is the called-for tuning method. It's emergency sound triage. The piano will sound well for the event (we hope) but the shock is revealed on its next job. The humidity onslaught will change the tuning significantly. I might meet the same piano again a few days later (in a different venue) and hear the aftermath. 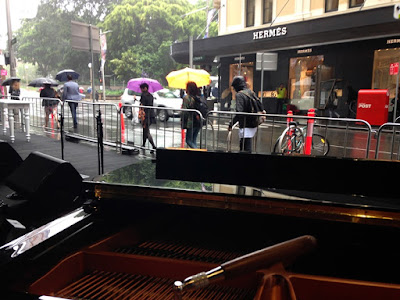 OK, quick, Gentle Reader. Riff a setlist of twenty rain-themed songs (which won't be played at this fashion label launch). C'mon, bang-bang-bang [clicks fingers demandingly]. You came up with at least one, didn't you? Good for you. Welcome to your earworm for the day. 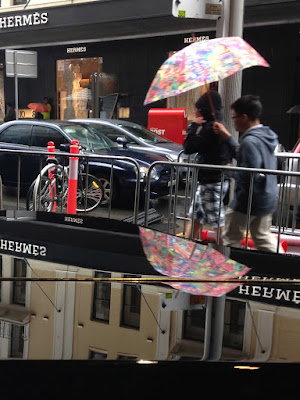 Quick, close the piano. Good. One more snap of the brolly brigade. Now find somebody, anybody, nearby who seems involved with the event and direct them to keep the piano lid closed. That's the best duty of care speech I can give. 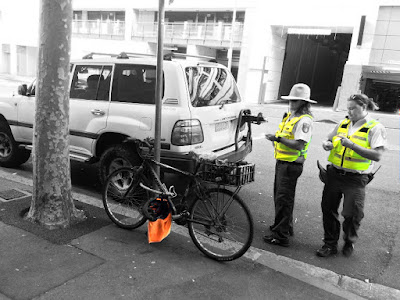 I see fluoro people. I'm glad to see them when I know that is my bike. The truth is that I cycle not where it's great to take a bike - but where it's terrible to take a car. It looks as though they're about to book my bike for having a cut-down milk crate on the back. Bloody milk monitors, they're everywhere. In reality they're walking around to the front of that Landcrusher (yes, I said 'crusher') to put a little love letter under the wiper. 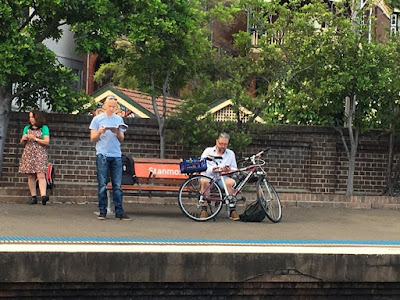 Spied at Stanmore Station. My brother in milk crate modification. Hey, watch out, milk monitors about - is what to him I did not shout. See? I can (the verb to) Seuss with the best of them. Not much call for it, I find, so I keep it up there in my mind. 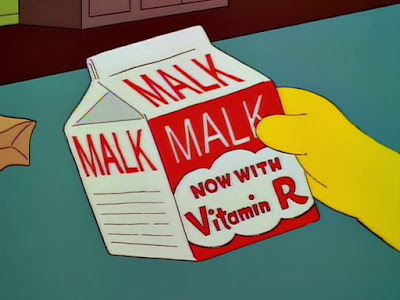 I loved school milk. Cute little milk bottles. Then cute little milk cartons. Because I went to a tiny school in Victoria. We could get our milk quickly. It was cooler (the climate and the milk). Ubiquitous tales of it spoiling in the sun are foreign to me. If any other kid didn't want their milk, I'd have it. But I'm sure I enforced a personal two-drink minimum. In winter the teacher (my father) and/or other school mothers would get the school milk delivery, heat it in a big pot and add Milo. We kids would queue up with cups and receive hot chocolate. It was the best. You tell that to the kids of today and they won't believe you. Will you vote for my single-issue political party 'Bring Back School Milk'? No? I suspected that would be your answer. 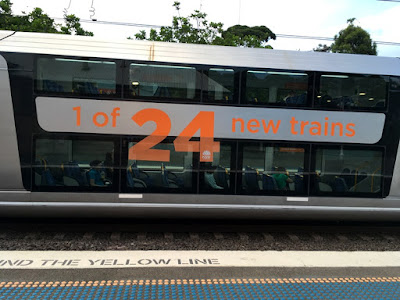 I don't catch trains all that often. So to me the pre-State Election emblazoned carriages were a surprise. Now they're a memory, or some sort of non-core lie. 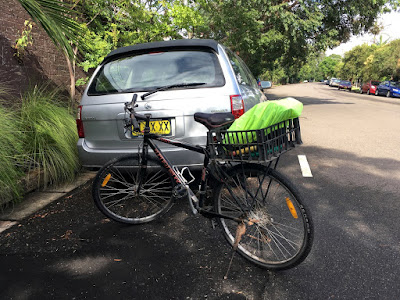 Transport tricks. I wander out onto my street with my tool bags. Where's my car? Did I park it around the corner? No. I was given a lift home (which should have been a lift back to Stanmore Station to retrieve my car). Oops. Never fear. With the I-have-an-idea lightbulb still gleaming above my head I saddle up the cycle and and ride to my car. And I'm still poised to be punctual for my scheduled jobs. Nice. 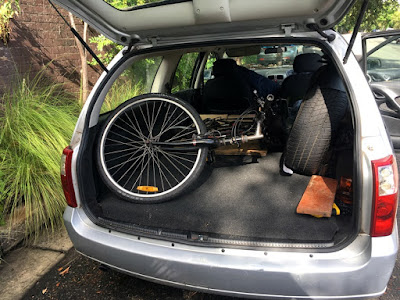 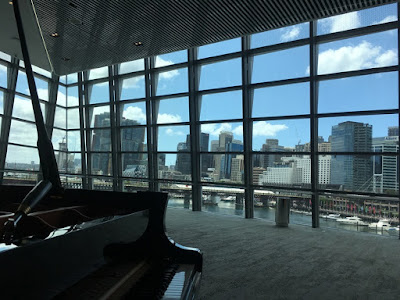 This place is huge, weird and soulless. Which place, Cazzbo, that venue? Or Sydney? This new behemoth of a space is designed with the management of masses as the prime criterion. Well, that and ensuring that folks' hip pockets are gouged at every turn. You can't bring your own water, that's just one of the squillion over-the-top rules I read on a big list in the loading dock. Still, that view is only taxed indirectly. 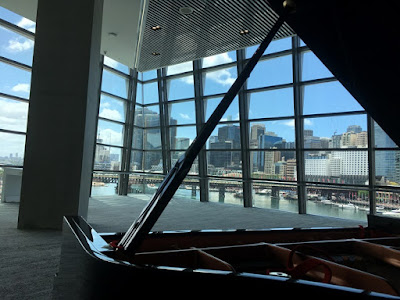 I'm interrupted as organisers decide that the piano should be rotated. We rotate it. I miss the view as I complete the tuning. 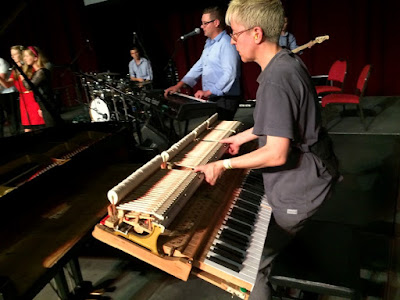 A nightmare job where repairs had to be done to the piano in a dreadful rush. The band started rehearsing around me. Fortunately the pianist also had a keyboard. Fortunately not all jobs are as stressful as this.


* Price on application. It's a gallery joke.

** To 'drop' a piano, as it is colloquially known in the piano trade, is to transition a grand piano from a vertical position on the moving dolly to horizontal (usually onto two of its legs, with the pedal lyre attached). The third leg is then attached. There are several exceptions to this rule. The best rule for you to have is 'get the experts'. No one wants the 'drop' term to be taken literally.


Have a snoop around the rest of the blog...

Pianos: Behind the Candelabra