An iPad for entertainment Brisbane to Sydney. Am I the only luddite who needs assistance from the passenger next to me to turn it on? And I've had a Qantas iPad before, but didn't remember how. Then my gentle seat-neighbour assisted again when I couldn't find the volume control, which I thought would be a touch-screen feature, but was some little button along the edge. Oooh, hot food, the holiest of all-but-unobtainable grails. The meal time windows have shrunk to mere slits. Folk carp and bitch about airline food (and some might argue it's an outdated concept - unless you pay), but a little curry and rice, perfectly nice! Anything hot is wonderful bonus in my book!

A complimentary wine, yes, please! That, however, should be chilled. Sauv blanc in the finest stemmed plastique. OK, I lied about the stem.

The Continuing Story of the Quants at Cuntas.

This is my tuba flight case. It is well-travelled. I tour a LOT. On my last leg home it copped a severe blow, unquestionably the result of Qantas baggage mishandling. 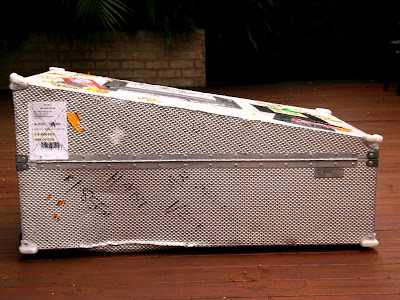 The location of the sizeable dent means that (incredibly) it did not reach the instrument inside. Whew! That is remarkable and fortunate.

But still, I have a compromised case and only days to resolve this situation before my next nerve-wracking bout of flights. Any wonder if I find I feel strangely relaxed at an airport, I realize that it is as a direct result of having no luggage, especially exceptional luggage (afwijkende bagage, the Dutch call it).

The dimensions of the case are: L 960mm, H 460, W630. It is large. Packed with instrument, electrics and costume it weighs 27kg. In these small photos, that dent might not look like much, but it is large and deep. The makers of the case were taken aback by the nature of the indentation and speculated about what type of abnormal incident would lead to such damage. But they deem that a repair is feasible. 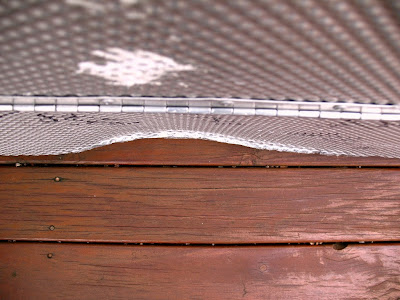 That is one serious divot. If it had occurred almost anywhere else on the case it would be 'GAME OVER' for the contents and my professional activities. 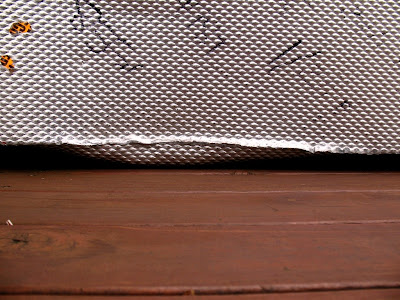 At least the very nice Qantas lady who handled my damage report immediately approved my logical request to take this bespoke case to Samuelson Cases (who made it) for assessment, rather than some suitcase place off a Qantas list. 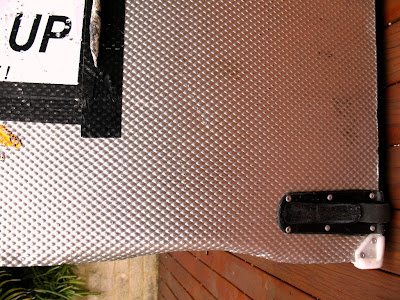 The case is not indestructible, nor is its contents (contrary to popular and ignorant belief). Nothing can guard against mishandling. Instead it is as strong, well-designed (and well-packed) as it can REASONABLY be. 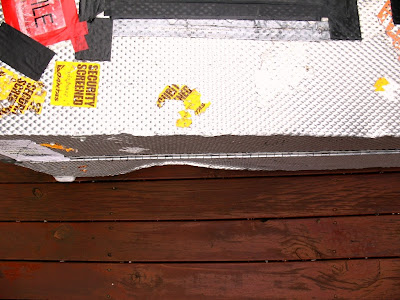 I've used my deck timber as a reference-point. 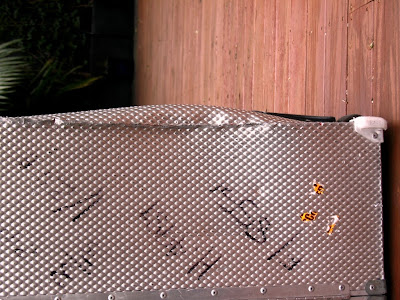 The bottom surface has bulged and bowed as a result of the side impact. 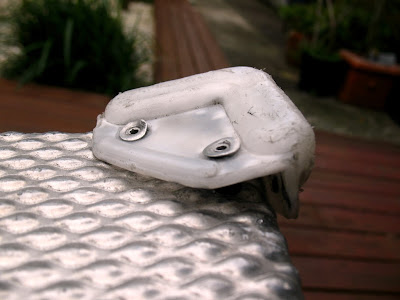 This corner is doing (or has done) its job - being a protector/crumple zone for impact on the corner, etc). That is less of an issue, but it clearly must be replaced. 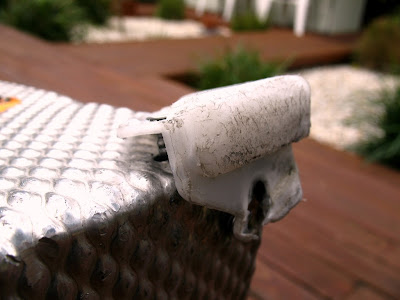 I'm such a good little Girl Scout on tour that I actually travel a spare teflon corner because once I had an emergency repair of this type in Auckland, again, with about two days to resolve it before the next flight. I learned that there were only two places in the world that made these corners. S is for stress.

So, I guess it is something positive that it happened on the way home, not the way TO the gig. But still, it quite simply should not have happened.

I just read someone's blog where they were repairing general wear-and-tear of a suitcase of their own volition, and the suitcase repairer was surprised to get a 'normal' gig from a 'punter', saying that the majority of their work came from Qantas.

Ironically, in my series of 'coping' signs, the latest is 'HANDLE WITH COMPASSION'. Yeah, right!

I still don't know who pays, or how, but I'm about to learn.
Posted by CAZZBO