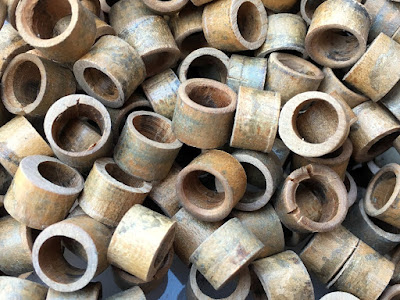 Let's play 'Which widget?' Have you locked in your answer? No? Time's up.

Piano tuning pins often have these hardwood collars or bushings. These bushings are used where the tuning pin passes through the iron frame, for extra support against the pin bending. The tuning pins are angled back against the pull of the string at about 6 degrees. Look closely at these removed pin bushings. You can see asymmetry in the centre holes, evidence of that angle which helps tuning pins resist the high tensions of piano strings. 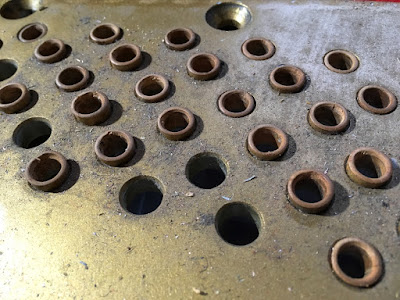 The strings and tuning pins have been removed. Now the wooden bushings are being removed. It is not recommended to reuse them. Many may break, degrade or rotate as the tuning pins are being screwed out. A piano restringing will be compromised by inconsistencies in the condition and position (rotation) of the existing wooden bushings if they are reused. Replace them, or consider going sans bushing depending on the piano. 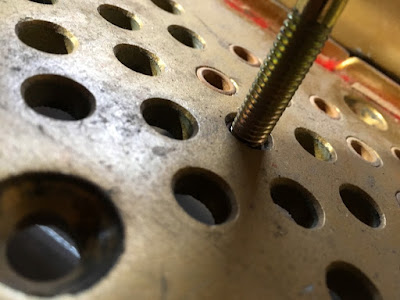 After the strings are off and the tuning pins have been removed, the cast iron frame is unscrewed and lifted out of the piano with a hoist. A punch is being used to tap the wooden bushings right through the holes in the frame. Bushings or not, tuning pins make no contact with the frame. They are held tight in the cross-laminated hardwood pin block (underneath or behind the frame) by being driven into holes of a smaller diameter than the pins. Each pin must be tight enough to hold a minimum tension of 100kg (or two Cazzbos). 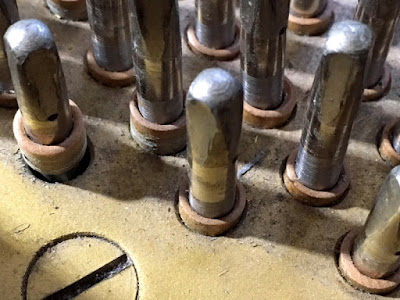 Let's backtrack to when the tuning pins were being removed from this piano. The wooden bushings can ride up and travel out with the pin, rotate in situ, crack or split. Remove these bushings then replace or omit. They are optional if you know what you're doing. 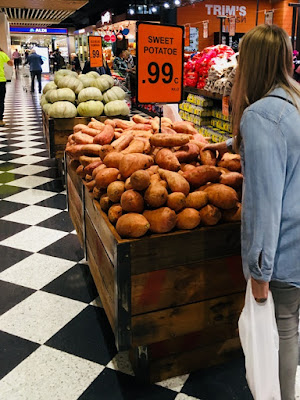 Is this E optional if you know what you're doing? I don't give a rat's arse about American politics, but cue Dan Quayle's finest hour. No one predicted the illterate Twitterate Donald Trump. 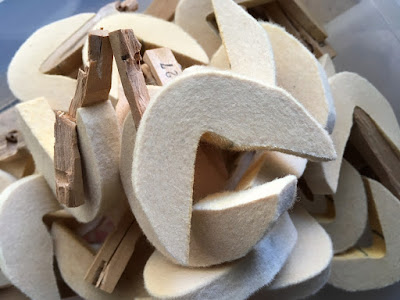 Which widget? Piano Pac-Man. This piano had almost all of its hammer felts bursting off the wooden cores. 'Exploding hammers' we call them. Never discuss them at the airport. The entire piano suffered, almost all the taut felt hammer coverings had sprung apart. That's exceptional. Normally (and not often, we hope) one might find a handful, down in the bass where the hammer felts are stronger due to being larger.

The treble hammers were painstakingly reglued and clamped, but the bass hammers were removed from their shanks and replaced. Epic. What level of neglect and climatic abuse caused this piano to be in such a parlous state? 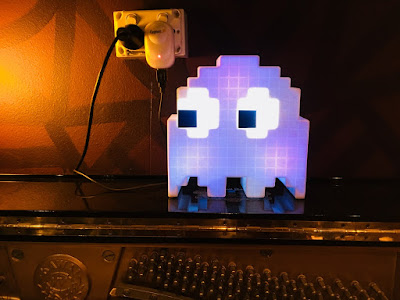 Those guys can munch this guy. I wasn't tuning the mood-lit Pac-Man ghost piano. Instead I was adding my musical stylings to an album on tuba, jug and multi-tracked slide whistle harmonies. It's a living! 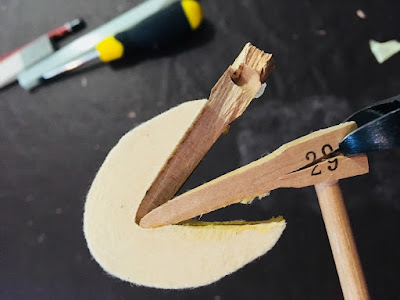 Munch. The hammers on the bass bridge of this poor piano are being removed while the shanks, butts and the rest of the action parts will be retained. Breaking the wooden cores off with cutters proved to be the best method of removal. It's unorthodox, the whole kaboodle. This piano was also exceedingly flat, about a third below pitch. Major or minor? Both. The only plus was that this piano was about 30 years old, not 130. 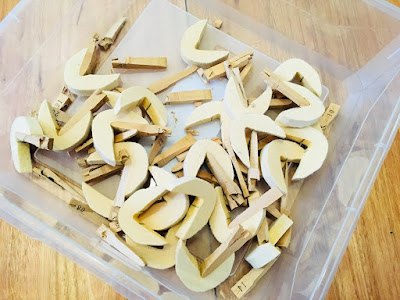 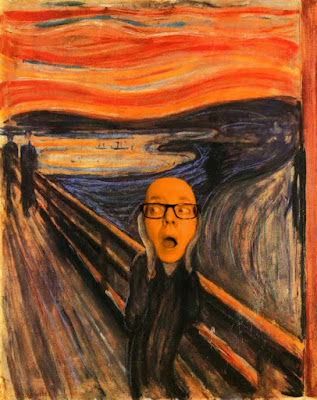 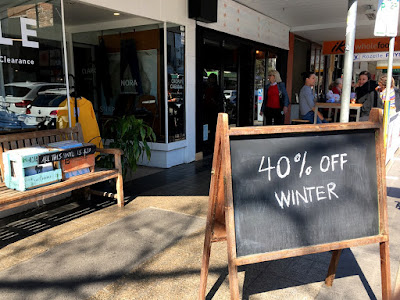 What a bargain, 40% off winter. I'll take two. I'd also like to return this record-breaking summer, please. 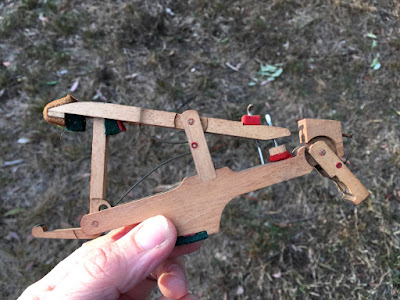 I'm forever evoking the term 'wippen'. I've caused it to infiltrate the general language of my friends. One mate told me of deploying the term herself in conversation (I wasn't even there). Then later, to me: "Just to clarify, 'wippen' is a generalised term for any waste material or surplus flotsam, an excess? Within the piano world, at least, yes?" No, no, no. I explain that it's a particular part, or to be correct, an assembly of parts within a piano. The next day (at the Piano Lair) I document a wippen to share. 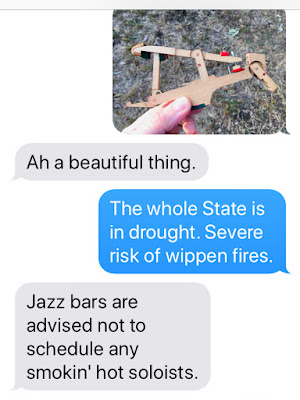 And we riffed into the night. No, actually that was about it. 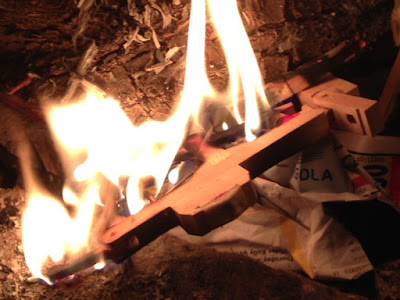 Hazard reduction burns in preparation for next summer. What a good view of the wippen heel in a modern grand piano. The base of the heel has a section of white boxcloth stretched over a smaller red undercloth (extra cushioning against the part that presses and rubs). In the piano, people. Extra cushioning against a part that presses and rubs is often called for. Yes, yes, in the piano. 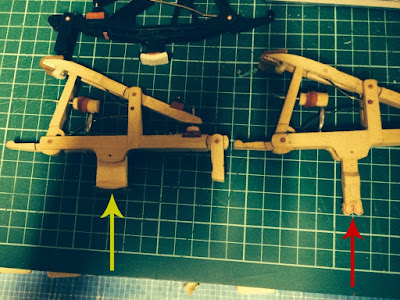 This is a very nerdy wippen photograph. The nerdiest. I've discussed coupled actions and how annoying they are. In a coupled action each key is clipped to each wippen making separating any or all keys from the action so much more complicated than it normally is. Here we see a test for a conversion of wippen heels from the bothersome beaky cloth-lined pouty pecker system (red arrow) to a more conventional heel (yellow arrow). The new heel is a bespoke wooden piece with a curved base lined with dimensionally stable cloth that will sit (and rub) on a modern domed screw capstan. Yes, sit and rub.

Above those two wooden wippens is a carbon fibre ninja wippen. Its heel has white boxcloth with a small red undercloth section. Classy and orthodox. The carbon fibre wippens (made by WNG) come with the heels separate, with several options as to where to locate them, to get the geometry right for different sized pianos. Measure, calculate, measure, test, measure, scream, clasp cheeks, measure. 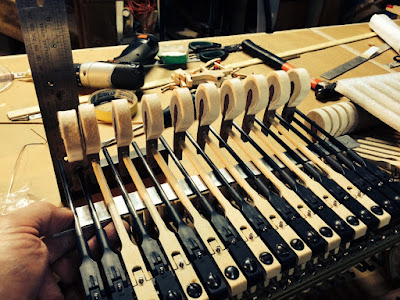 Ninja memories. A piano receives dimensionally stable, impervious-to-humidity carbon fibre action parts. Alternating new parts with existing parts is a method of observing and intergrating the regulation of the new parts with the regulation of the existing parts (which need to have been regulated to a reasonable standard). Here new hammer heads are being added to the ninja shanks. A metal straight-edge is being used to lift the whole section of hammers to see that they are all moving vertically. If hammers are not moving vertically from rest to the string it is addressed by adding teensy bits of appropriate adhesive-lined paper to the hammer flanges. Nerd it up, Cazzbo. By the way, don't confuse alternate with alternative. I've threatened to punch every second person who does that. 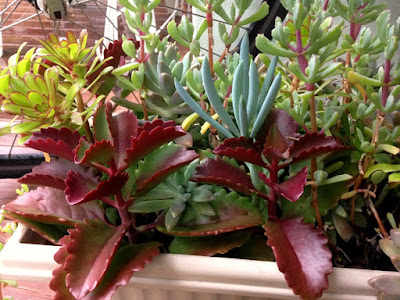 I alternate between celebrations of - and memorials to - plants in my garden. Via Gumtree I bought some succulents from the cutest identical twin ladies (in their seventies) that I'd ever met. OK, the only... blah, blah, that thing I said. I wish I had taken a photo of them. I didn't have a clue what to do with the succulents, I really just wanted to look at them. The twins or the succulents? Now I have learned a little about how to propagate succies and have expanded my collection. I call it 'old lady gardening'. I wish I had more time for it. 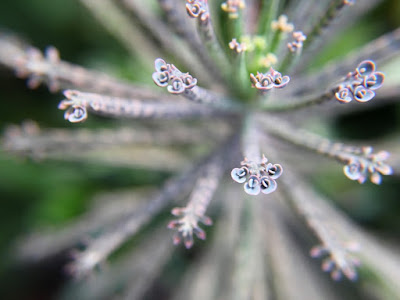 These were bunking in with another large job-lot of plants I bought from a backyard seller. I liked how she co-planted things, shoving bits and pieces into any gaps. It pays for the different things to like the same conditions. I've since attempted more random gap-filling co-planting. Normally I'd be inclined to think everything had to be neat and categorised. I have realised that gap-filling is wonderful. Not a euphemism. My neighbour proclaimed this a weed. He might be right. But too many things are regarded as weeds too readily. No thread exists on any gardening forum I've seen recently without the term 'obnoxious weed' (sic) being evoked. Look, nothing can triffid off in my garden, both my yards (front and back) are concreted. Greek-style, baby, just like my yoghurt. 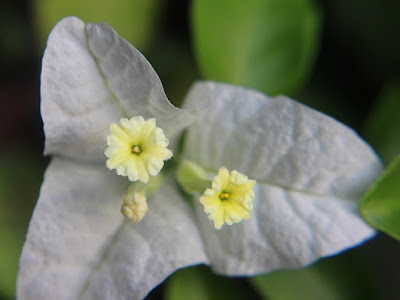 My bougainvillea wall hasn't put on an impressive display for a few years. I think we've had wetter summers. I'm always on tour performing at that time, so I measure it by how much I have to nag others to water for me. The flowers are tiny. What most regard as the flowers are coloured bracts. I want more bracts. 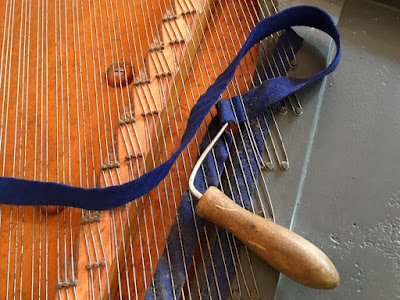 Using a stringing hook to remove the old listing felt* woven between the backlengths of the strings in the middle of a regal Rönisch piano (to be restrung). Access to this central part of the treble bridge is only possible once the bass strings which cover it have been removed. One might want to refer to these trimmings to make new strips to be inserted between the new strings. Document, record, photograph, label. Before smartphones or digital cameras, piano technicians would draw (sketch) listing felt flourish patterns to document them before undoing. I call weaving in such pieces 'Tonia Todmaning' She is known for making craftwork.** This removal must therefore be 'un-tonia-ing' - iddle-I-po. 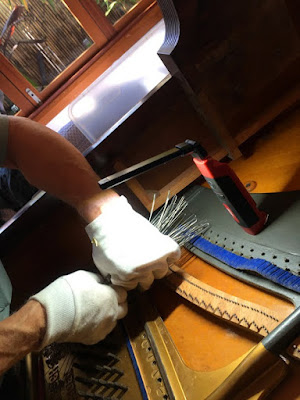 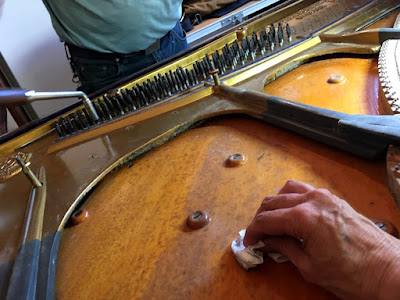 I am the Shannon Lush of pianos. Well, I've done rather too much cleaning of them, including several roof leak insurance jobs, mold, mold, mold. Lead dust, heritage gunk. Yuck. Having the strings off is the best opportunity to clean a soundboard. This upright is on its back. I'd be mad not to do a cursory clean while there is access. It's not a job for the cleaner, pianos are weird beasts. 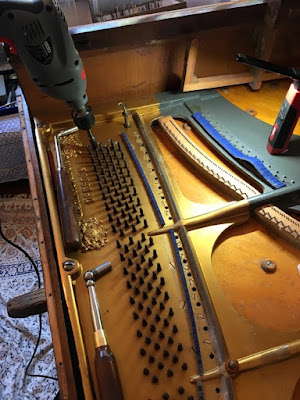 The loneliness of the long-distance pin remover. The strings are off. Now the tuning pins must be turned out to a certain level manually. When they're at a certain height the removal can be completed with a drill fitted with a star-tip bit. Large powerful drills are called for, but speed is a no-no. Unscrewing the pins too fast risks developing too much heat and burnishing the wood in the pin block holes. 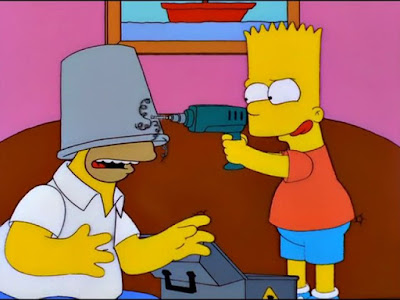 As absurd as this Simpsons scene seems, my sister and I (when very young) used to play a game we called 'Robots' where we would put buckets on our heads then walk around blindly. You'd have a little peek, then lower the bucket and proceed tentatively. Repeat. That was my method, I know not of my sister's. I had a mishap and have the scars to this day. I digress. No power tools were involved at least. 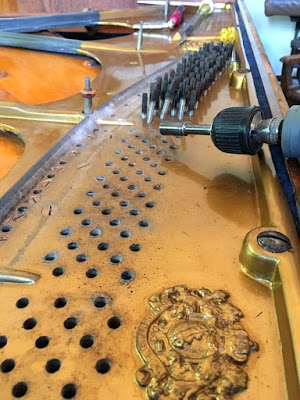 The torque on these tuning pins was so low that a decent medium-sized power drill was up to the task. Don't use small ones, or battery ones, you'll kill 'em. 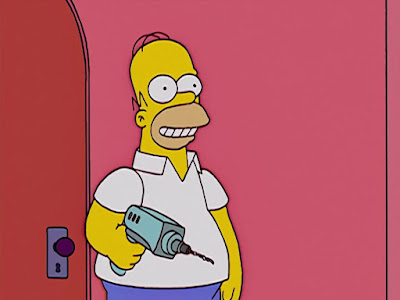 Marge: What's that ruckus?
Homer: It's the sound of a go-getter at work.

Homer installs a hook so they no longer have to put their keys in a bowl like common savages. 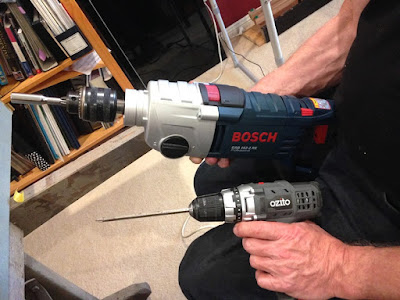 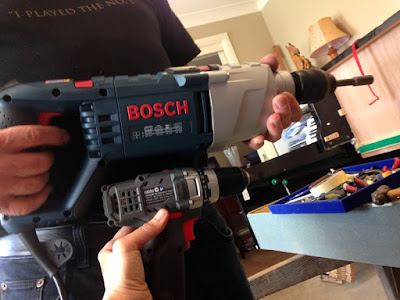 * Wikipedia. Darn right. I'm single-handedly keeping that reference alive every time I blog about weaving cloth lengths between the strings of pianos.

Pianos: A mug's game (not really).

Pianos: What's in a name?

Pianos: A bridge too far