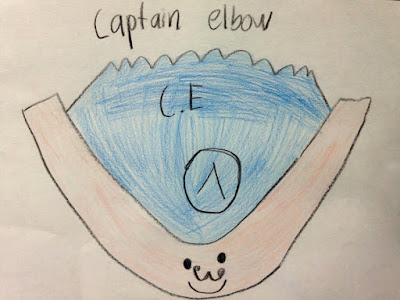 Heroes come in all shapes and sizes. Don't you just adore his little handlebar moustache?

Captain Elbow's super powers: Queue-jumping (for good, not evil), commanding every aeroplane armrest in his orbit, and helping others appreciate jokes, 'Eh? Eh?' with a jab to your ribs to ensure they've been tickled. At the very least he must command healthy physical boundaries. 'O, Captain! My Captain!' I wanted to scream on a recent Melbourne train. How can it be that Melbourne's exponential population injection has caused its transport woes to be worse than Sydney's? They probably aren't. I'm just not normally exposed to the severity of peak period anything. 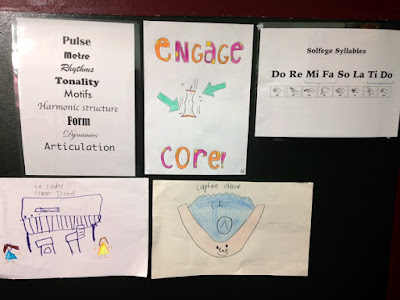 Captain Elbow is omnipotent, he could knee you in the crotch (for good, not evil). But I've encountered him in a music practice room while tuning a piano. Is he the invention of a child whose piano posture has been corrected one too many times? Are elbows problematic for pianists? I've certainly experienced conductors who could fly the Captain Elbow flag (and it would never be a compliment). 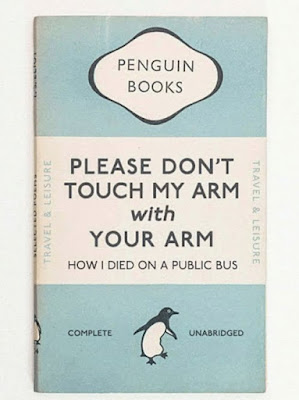 Captain Elbow developed his super powers after reading this book. 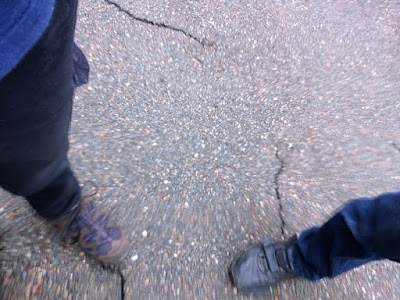 Accidentally arty. I wrangle my iThing to photograph something fetching and manage to photograph our feet. That road is definitely all it's cracked up to be. Hey, it's a who's who of shoes. You and only you (you of that other shoe) may touch my elbow at any time. 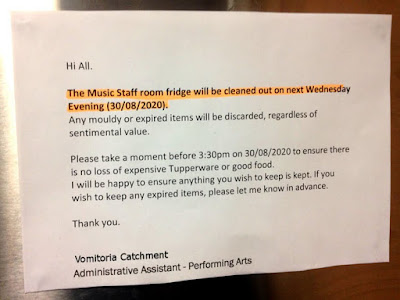 On a school staffroom kitchen refrigerator I discover the most perfect sign. Grammatically flawless, colourful, amusing, impactful. Five stars. I like the whimsical (almost sarcastic) notion that folk may regard spoiled food as having 'sentimental value'. Vomitoria* is generous in permitting sentimental spoilage to be retained, with communication. She values 'expensive Tupperware'. Who could quibble? If I worked in an office I'd be the perfect Friday fridge monitor (see, I didn't say Nazi). I don't like rubbish of any type building up or not being discarded at the first opportunity. Weird types of domestic blindness exist where folk stop noticing. Hail hallowed Wednesday evening. Let Captain Elbow use his special kinked arms in a clean sweep. 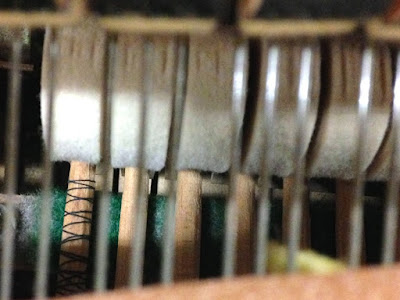 Meanwhile in the Sick Bay we find a glued and cotton-trussed broken hammer shank. A legitimate and tidy repair (by someone else). Ideally the shank would be replaced at some point, but that is a complex task requiring more time and tools. 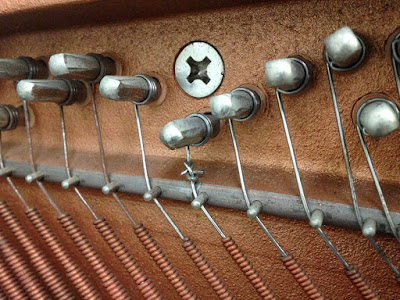 It's busy in the Sick Bay. Splices (as these knots are known in the trade) are legitimate and wonderful. I'm crap at making them despite being trained in the technique. Music wire is incredibly stiff high-carbon steel and it's bloody hard to tame. Rounded needle-nose pliers are useful for making bends and loops in music wire. 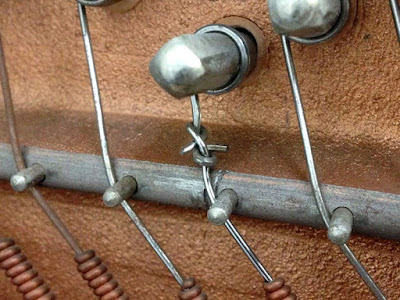 A splice is a thing of craft, function and beauty. It should be an interim measure, but sometimes (particularly in very old pianos) no one is rushing to fork out for a new bass string. A zingy new bass string stands out tonally amid a field of tired old strings. Once strings start breaking, by rights, the whole lot are on the way out. Age, surface rust, infrequent tuning (followed by necessary pitch-raise catch-ups) worn, compressed hammers and the rigours of playing all contribute to string breakages.

Elderly and degraded piano strings often will not have the resilience to endure the invasive process of being spliced, even when there is sufficient remaining length to attach a new piece of wire. If one earnestly attempts a splice, another break might occur when the string is being tensioned up. The kilogram load on piano strings is enormous, an average of 90kg per wire, up to 150kg in some parts of the piano. Degraded strings are degraded strings, people. I can't stress that enough.

There's a new knot in town - I read of a splice alternative in the American Piano Technicians' journal. It has certain advantages over this traditional knot. I'll let you know how I go with it... or not. 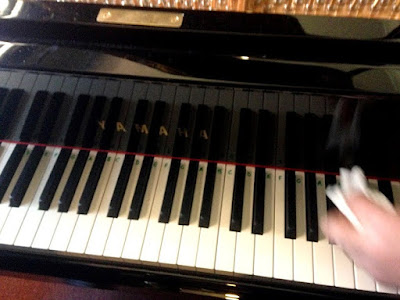 This client teaches on his classy new piano. He is in the habit of using a whiteboard marker to write note names on the whites, then wiping them off with a rag at the end of the day's lessons. Here's my cheeky stealth shot of the wipeout. I disapprove of note-name writing, I think it is a great way not to learn your notes. I recommended that he do more teaching on his other piano and make lessons on his top-of-the-range piano special treats. Nothing is more obvious to a piano technician than the wear on the hammers (and associated tonal changes) on all the favourite notes in the middle when lots of beginners play the piano. 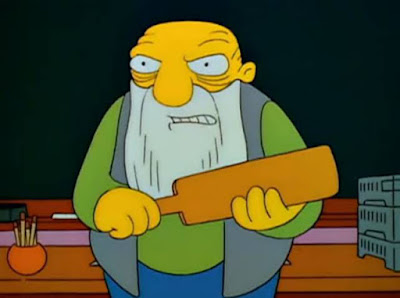 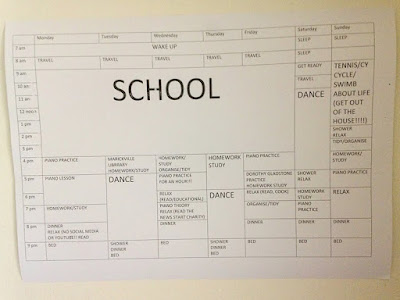 I spied this timetable at a home job. I like it. I see so many similar sights in domesticity. I'm big on lists and diarising, but I only have to schedule and organise myself. Some family management plans are so intense that they'd make an army's schedule seem a sea of seamless slackarsery. A chart I saw recently had the family divided: Husband, wife and hothoused trophy child. According to that timetable the wife rarely left the kitchen. Non-stop house duties, all timetabled to within an inch. I might blog that one sometime, but highly anonymised. And buried deep, deep... because that client reads this blog! 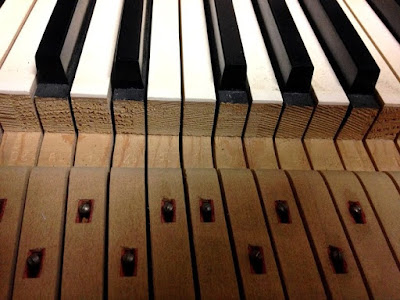 Here's a little ballet school piano with interesting keys. It might be hard to see in this shot, but the key design (striving for a short piano) rivals the Soviet drug programs which delayed the onset of puberty in female gymnasts. It is not well-known, but the very same drugs were administered to Eastern Bloc ballet pianos. 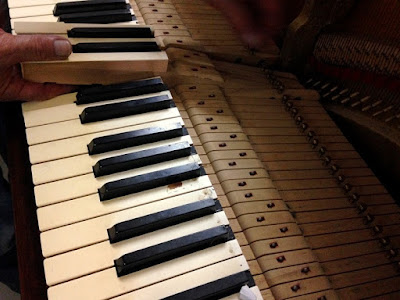 The part of the keys you see (and play) are level and 'normal' but it is the rear of the levers that slopes downward. 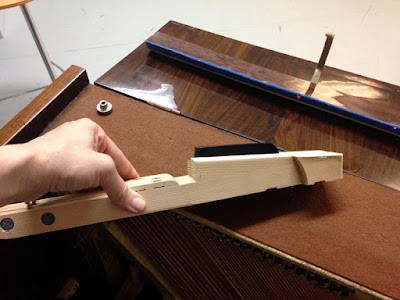 Each key sports an unusual two-part construction (with a respectable 'key button' piece at the lever's fulcrum point). 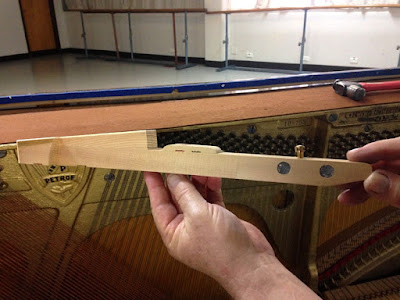 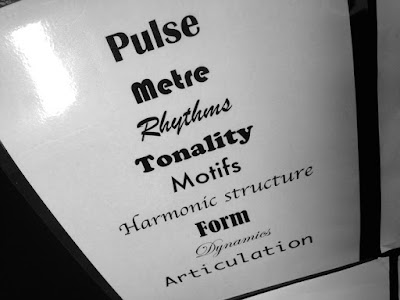 Did you notice on Captain Elbow's wall earlier that 'meter' (in this usage denoting time-signatues and beats) was misspelled? Along with human heights and baby weights, this is a place where the metric system is just not welcome. 'Metre' is incorrect here. 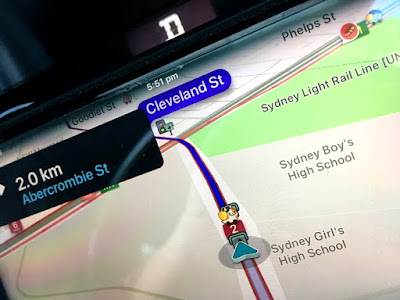 Elitism gone mad. According to Waze (fabulous city map software) there's a just one snooty girl and one snooty boy attending these institutions of learning. Whatever part of the word comes before the apostrophe denotes the meaning. So the possessive apostrophes should be after the plural esses. This ain't no grammar blog, but I care. 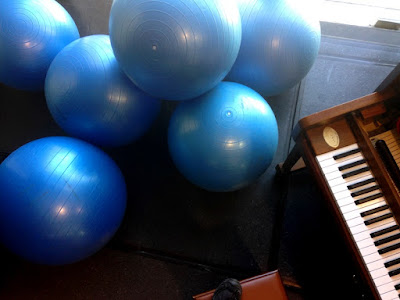 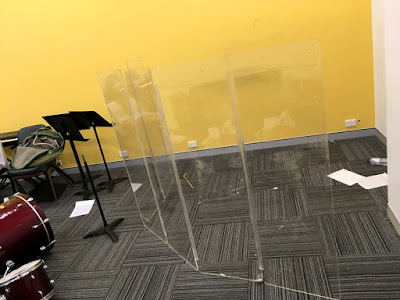 Crikey, Animal has escaped from his enclosure. 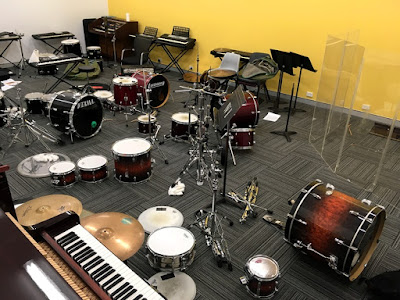 This is a serious infestation. To be fair, a percussion inventory was in progress. 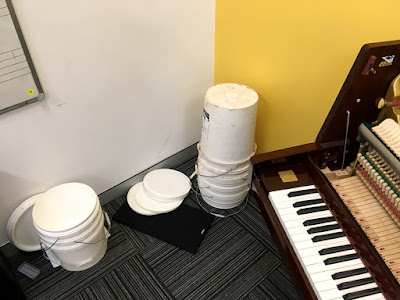 Now let's tally the drum kits for those aspiring to busk on Pitt St. 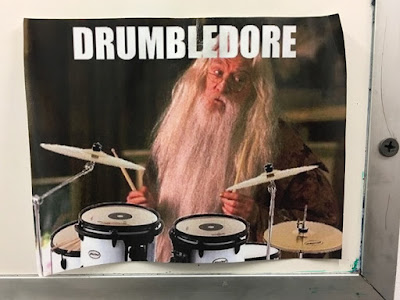 Housemaster Drumbledore. This was on a whiteboard at the drum inventory school. Everything adds up. 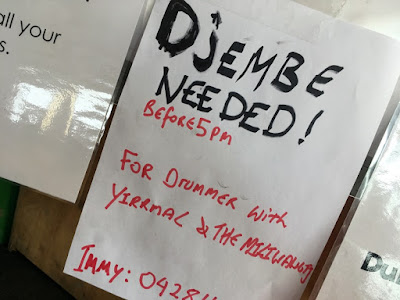 From the noticeboard at Woodford Folk Festival. It may be contentious to say it, but in my world a djembe is never needed. 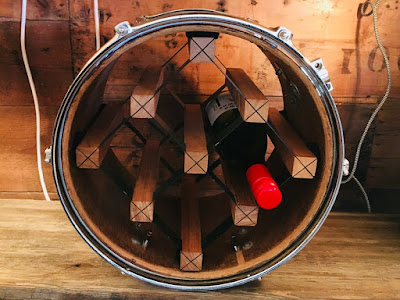 Drumbledore's corner of the staffroom. It's actually a creation of Drum De-lights that I saw at The End Festival (Hill End). 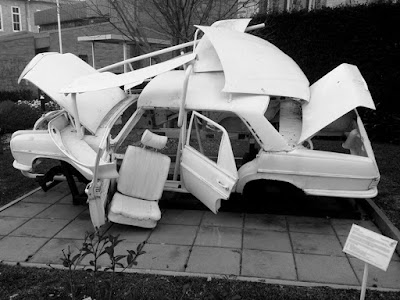 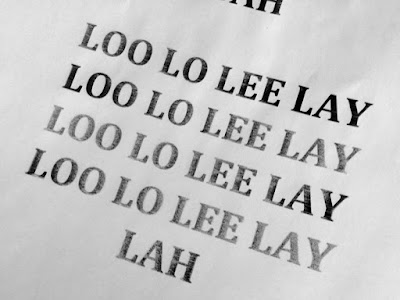 This singing teacher's poster reminds me of hearing many a vocal and theatrical warm-up, and when Chief Wiggum (Simpsons) declares that he has created angry police dogs by 'starving 'em, teasing 'em, singing off-key... mee may mah mo... me moo mah mee'. 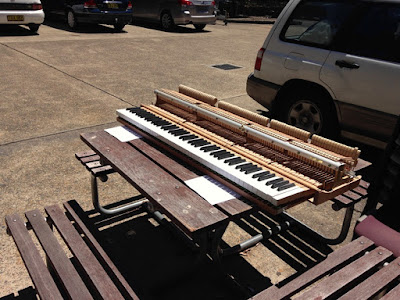 A mouldering piano in an ill-ventilated storeroom was being blamed for the musty smells in the room. I thought the room's ridiculous design and materials caused it to reek. Sure, the piano was very dirty but it was being unfairly maligned. Sometimes part of the solution is actually a decent airing out in the sun. Just sometimes. 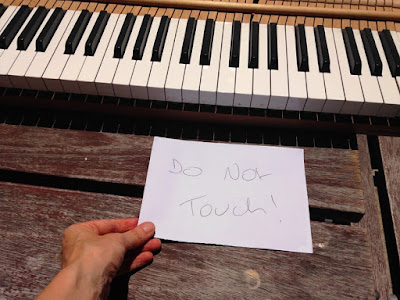 Persuade the staff then let them take charge of the signage so that they feel authoritative. I dedicated a session to Shannon Lush-style cleaning of the rest of this Pig-Pen piano, doing what was realistic within time and budget to make it a bit more inviting. 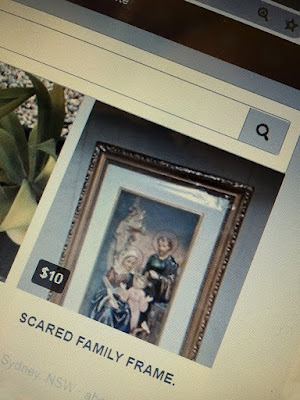 In schools and homes, I seem to see way too many of these. 'Scared Family Frame'. Terrified. I only permit myself to view a certain Marketplace on my laptop, not my phones. So the amusing things I spy are usually dispached to mates in this manner, a snap of my laptop screen. Meanwhile, it's a sensible level of suspicion to fear homunculi. Here's to heresy. 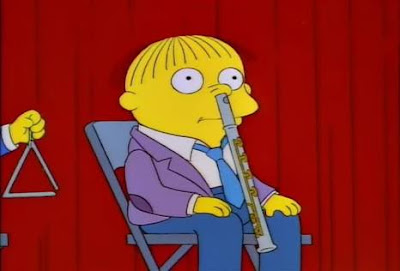 But all in all, schools can be very nice places when they're student-free.

* Vomitoria Catchment. I've anonymised the note and honoured one of the recurring characters on Shaun Micallef's Mad As Hell. Win-Win.

A school piano movie: The Amazing Bearded Piano (I'd forgotten I made this!)