Pianos: Behind the Candelabra 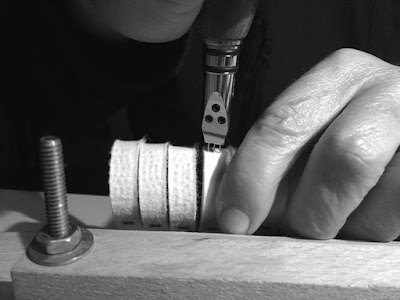 Needling piano hammers is called voicing. It is tonal adjustment. If you think your regularly-used piano sounds the same as it did ten years ago, you're wrong. Aside from tuning changes (which we hope are regularly addressed) the piano's timbre changes as hammer felts compress and the once-focused point at which the noses strike the strings broadens out and develops string grooves. Very worn hammers are often reshaped (filed and sanded to restore their profile) before voicing, but I should only touch one strand of nerdery at a time.

The shoulders of the hammers are needled, sometimes up near (but not on) the strike point (the tip of the nose that hits the strings). Brand new hammers (above) require Dexter levels of stabby-stabby. These hammers are off the piano and held by their shanks in a jig. Stabilising and supporting the hammers while needling is critical. If you look closely you can see the fresh tri-needle marks.

When we were in piano school we dubbed this voicing tool 'the blood-letter' (and its upright version 'the baby blood-letter'). One does get the hang of being an accurate human sewing machine but no one could say they haven't drawn blood. Sydney Swans colours aside, there's no place for my O-positive here. 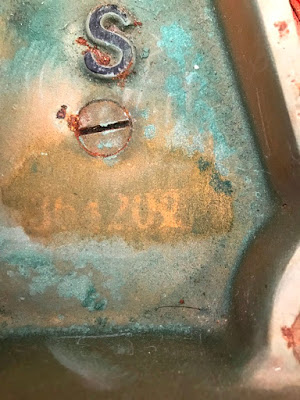 Can Mrs Marple can have a crack at solving the mystery that is this piano's serial number? S stands for scungy. So, erm, should we wind the odometer forward - or backward? 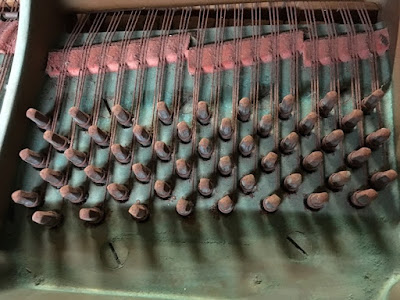 Here's the same piano in all its verdant glory. 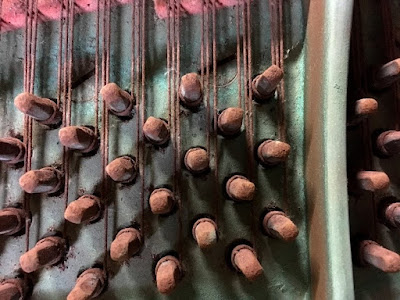 What Gough-forsaken heckhole of a joint has this piano called home? I know the answer. I demand the cone of silence if I'm to elaborate. The preparation of this frame for repainting will be a bigger-than-wished-for job. 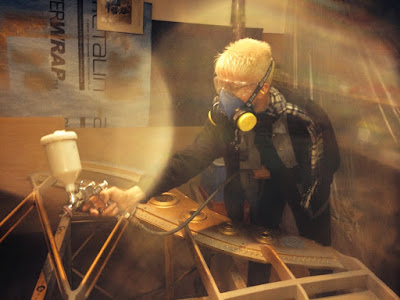 Frame spraying. Many coats and a scarf. 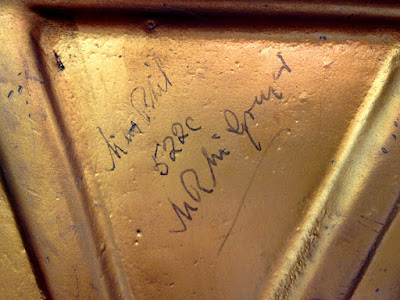 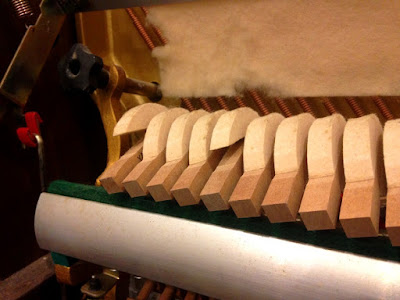 Behold, a couple of 'exploded hammers'. Hammer felt is wrapped around the wooden core of the hammer. It is held under high tension with glue and staples. Age and weather can mean they spring off. Glueing, clamping, trussing is the usual fix. New hammers would be the classy fix. Some piano manufacturers' staples barely enter the wooden core, they're all but cosmetic. One must never discuss exploding hammers at airports.

But cast your eye above the hammer line at the frayed fluffy felt piece. Has it been mauled once too often by some suspicious cul-de-sac curtain-twitcher?

In the piano world we call this curtain the celeste rail. It is sometimes called the muffler or muffler rail. I will often use that term for clarity, it is what it does. Its function is to be lowered (via a pedal or lever) between the strings and the hammers. The hammers then strike the strings through the curtain and volume is reduced to I'm-compelled-to-compose-lullabies-at-midnight levels. 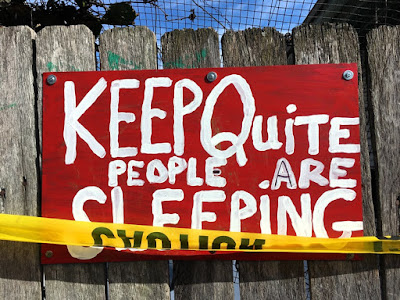 'Muffler, mute' but (ideally) not 'damper' nor 'dampener'. The damper system is a separate device within the piano. It's no matter if these terms mingle as a client describes their issue, we'll be together staring 'under the hood' soon enough. 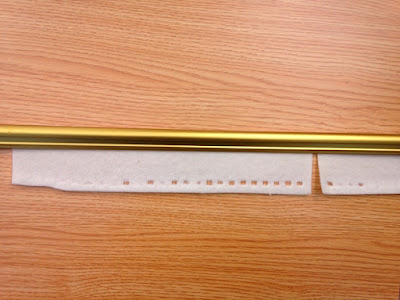 This celeste rail felt has been worn out by its intended use. The client is self-conscious, has complainy neighbours, or both. The felt is regularly replaced. 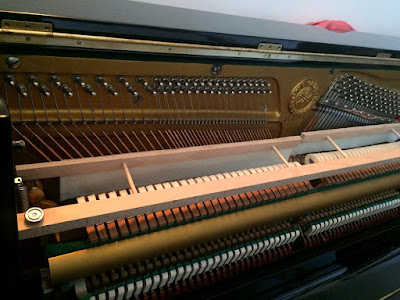 Master woodworker Superhero Tech crafted this celeste rail for a client who insisted the wood be milled from the Faraway Tree and the curtains woven from unicorn mane. Upright hammer shanks are wonderful dowels. It's a triumph. 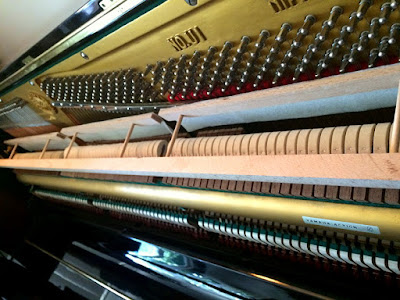 She also insisted it be pedal operated. That required some geometric jiggery-pokery. I think I would have told this client to put a sock in it. 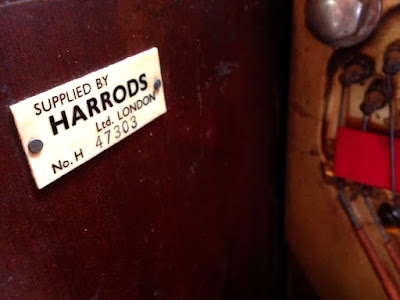 Harrods. I like their bank. It was the only bank in London that would honour my emergency credit card when my backpack was snatched many years ago. They paid me in upright pianos. Pound for pound, pianos are heavy. 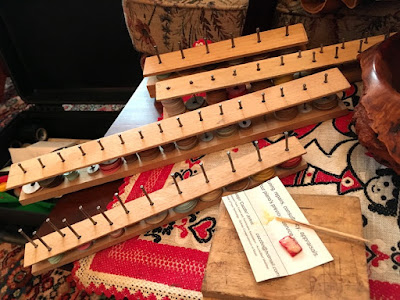 It can be a challenge to do repair work in cramped, cluttered doily-dotted domestic piano rooms. Here I create a nice bushing cloth lining for a very old-fashioned celeste rail fitting. Glue is applied to a new cloth piece with a toothpick, my girly methods. Oops, I'm using my own business card. The great tradition is to use someone else's.

Above my workstation you will notice my partner's abacuses. They hold paper and cardboard key punchings (washers) used to regulate piano keyboards, adjusting key height and key depth. 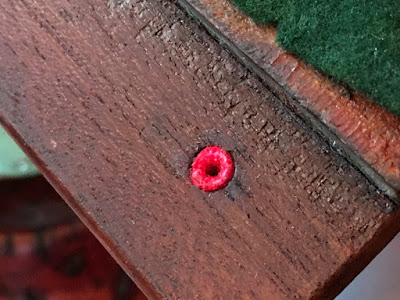 My cloth bushing repair. It's an oversized version of almost every axle joint in almost every piano. Wherever there is friction involved, finely-woven cloth is used (or kid leather). Many modern manufacturers skimp on the quality of this cloth, resulting in pianos whose cloth bushings have worn excessively and unevenly in no time at all. The quality stuff lasts for decades, the imposter low-end crap shows wear before the piano has left the warehouse. Putting the wear in ware, eh? 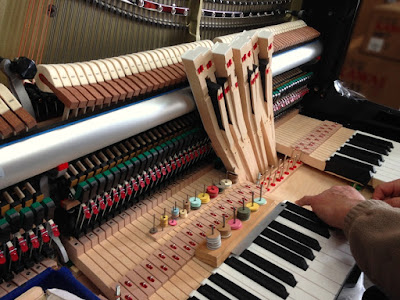 Superhero Tech's abacuses in use. At first I thought they were absurd, but I have just-more-than-lukewarmed to them. They're winning me over. Perhaps they do trump the more commonly-deployed little divided fishing tackle boxes and other containers (my current methods). 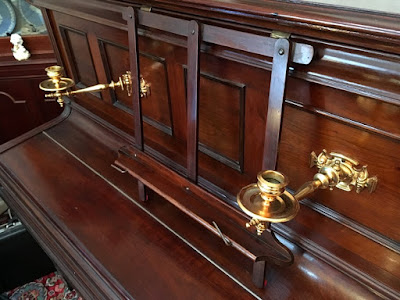 The Brinsmead. Pass me my candles, Barbara. Replicas of these fittings are available from piano parts suppliers if you seek to recreate this look. But avoid the wax, Max. 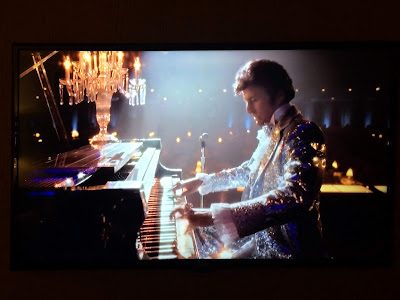 Candelabra at twenty paces. On a rare night off on tour I indulge in a movie on the fancy hotel room goggle box. Behind the Candelabra. My snap of the TV that night is a result of the real-time reportage that smartphones have made commonplace. 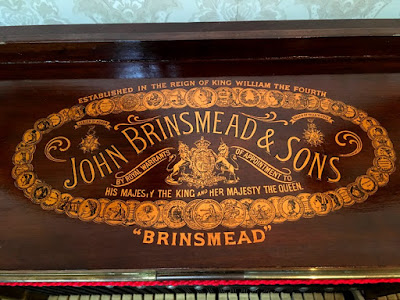 'By Royal Warrants of appointment to His Majesty the King and Her Majesty the Queen'. The warrants sound a bit scary, but the rest is a veritable fairy tale. A magical world where all kings and queens are together (except the many fairy tales where they are not). Still, I can remember my father guffawing when a young me asked if Prince Philip was the King. That's when I learned that real life ain't no fairy tale. 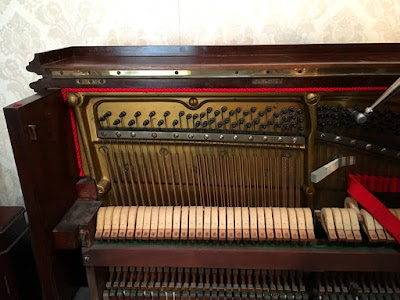 The Brinsmead is a straight-strung piano. All strings are vertical and it has just one long bridge. This means it sounds especially insipid in the low tenor and all of the bass. The angles of a cross-strung piano (which has two, occasionally three, bridges) enable greater string length where it is needed. Quaint and obsolete, yet still going in a knee-rug-and-cup-of-tea kind of way. I'll take care not to infer the same of the client. 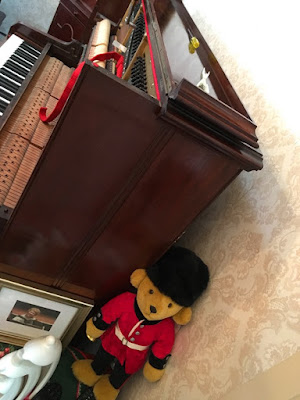 Here's a sensible thing, a bit of breathing room between the piano and the wall. This helps the piano to sound better and ensures that the lid can be fully opened. Folk treat their uprights like laneway lovers, ramming them hard up against the wall, compromising sound and resonance. It barely matters in most circumstances, but it is a pain in the arse if a piano technician cannot fully open the lid of a piano (if it collides with the wall or an artwork). Sometimes a piano's position might mean the lid has to be removed entirely, this is an additional inconvenience. 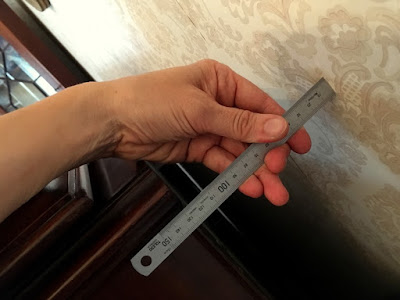 ...and in metric. It is a huge inconvenience (if not danger) to have to move a piano just to service it. 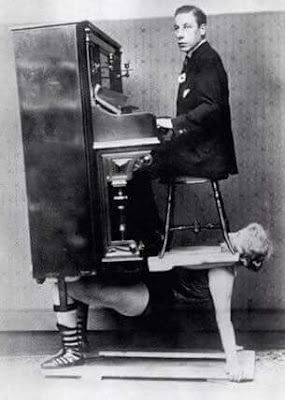 Ideally no one should be forced to move a piano to gain basic access. My partner in piano pampering is much more likely to move a piano (he does it often) whereas I am more likely to try to find a way to secure and stabilise a lid in a non-optimum position. Neither approach is much chop. Usually small tweaks could be made that would mean no moving was needed, but more often the piano is required to be returned to a quarter past ridiculous. 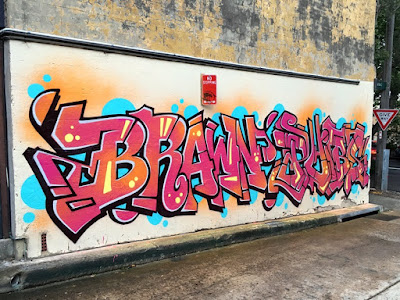 A Newtown laneway. Oooh, does that say 'Brawny'? I can't decypher the second word despite my new multi-focals, but I normally can't read these words at all. 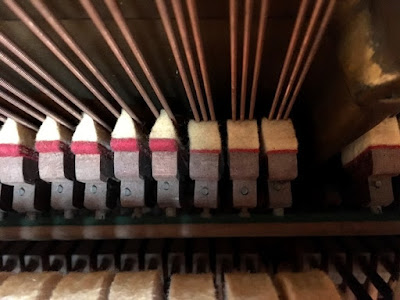 The upper bass register in the straight-strung Brinsmead. Three copper-wound tri-chord notes with flat dampers. Flat dampers work well in the mid-to-upper treble where the frequency is higher and the strings' vibrations are smaller. As we progress downwards dampers gradually transition from simple flat rectangular block pads to 'split-V' shapes which nuzzle in between the three strings. In the mid-to-low range, silencing the strings is more like stopping a truck than stopping a car. Don't hold out hope of a crisp staccato. 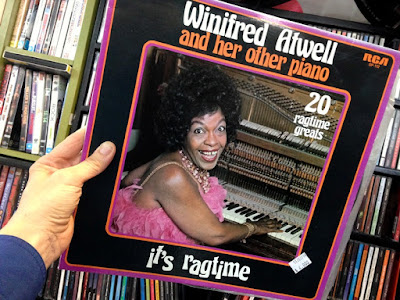 The one thing we know about Winifred Atwell's 'other piano' is that it, too, is straight-strung. Spied at my local op shop and snapped. All the fun of sharing it without accumulating an object I do not need. 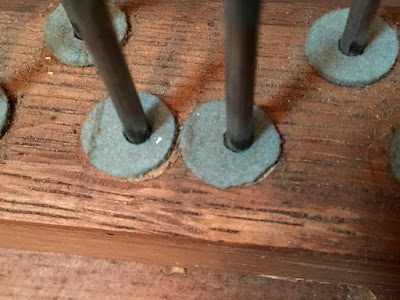 Underneath the Brinsmead's keys, the cloth punchings had a few cartoon eyeballs amid the fray. 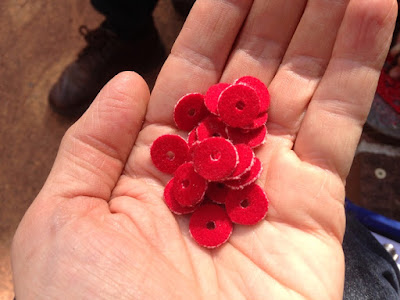 Here are my own handmade punchings from another job. Quality control dictates that any punching that looks just a little too much like a Simpsons eyeball should be rejected. 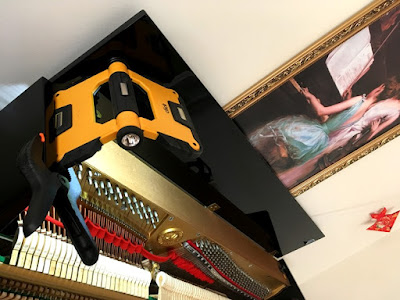 The light and clamp proved a good combo to chock this piano's lid up to prevent it falling. It's not possible get the lid vertical or beyond without moving the piano, or the artwork. I'd consider moving the artwork, or the piano, but if I can feasibly find an alternative to a piano move, I will. 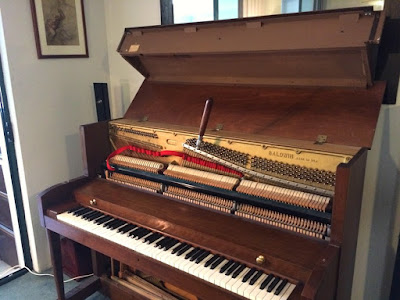 Somehow this piano's bulbous monstrosity of a lid was made to perch safely. 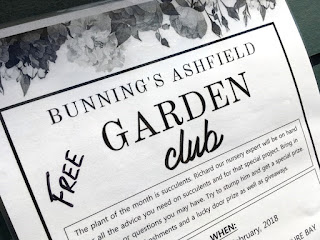 Speaking of bulbous, behold a rare apostrophe in full bloom.

Enjoy some other hand-crafted bloggy bits...

Your Feet's Too Small: Piano Pedicures