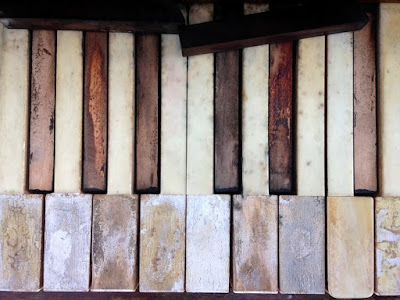 To call this a Brisbane street piano is to misuse two of those three words. It's used by a Brisbane eatery as wheel-out signage. A bicycle as a device to place signs where there is no authority to do so is more traditional (and convenient). Most ivory keyfronts are gone (with the throat pieces clinging on). Detached black keys are sprinkled like cracked pepper. 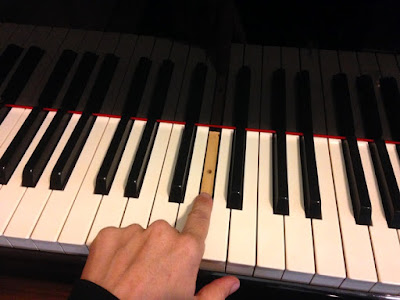 St Simian's School for Entitled Apes. Black keys playing truant can happen in an indoorsy situation. Undue force may have been a factor. Or the Government raising the pension age for horses, affecting the glue factories of the world. 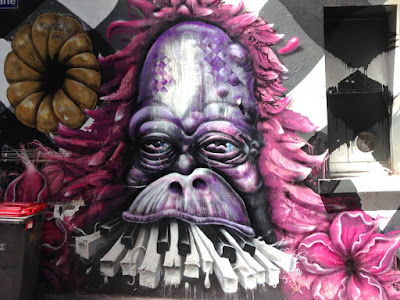 Depicted is the crest which is embroidered on the blazers of the Music Captains at St Simians. That last sentence evokes the (still-great) song The Court of King Caractacus but I'll leave it there, lest I void my Working With Children Certificate. Therin lies the dilemma-laden cleft between artist as artist, and as person. I spied this equally-tempered gorilla in a Melbourne laneway. 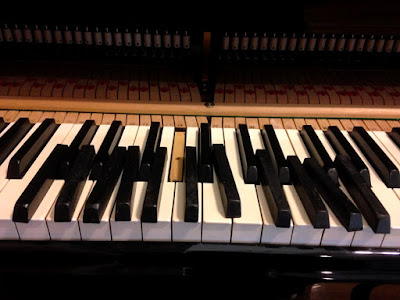 There is nothing like sizing up umpteen auditionees for the role of A flat to expose the fact that every black key has a slightly different width, length, front angle and level of bevel. In traditional piano factory language the black keys are referred to collectively as 'sharps'. There's no need to be pedantic about enharmonic spelling during piano assembly. 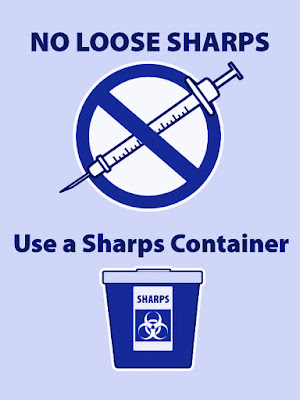 Sweet subversion, all those loose sharps. 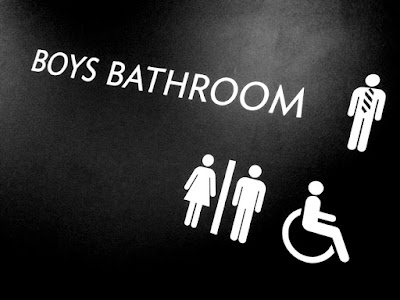 It amused me to see the school tie on the boy on this sign. Bloody snooty. Next you'll be telling me they're allowed to have loose sharps in the toilet. 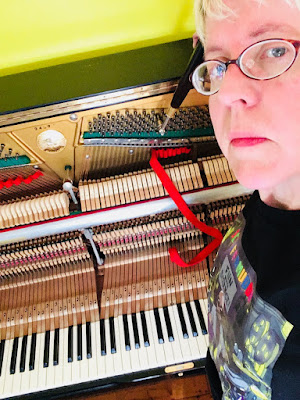 Not enough selfies? Not enough selfies. Sporting my Scruffamudda t-shirt to suggest that my 'fun with science' (see tee) is taming a piano using my ears coupled with many, many a weird interval played. It is fun. An immersive, wonderful discipline and skill to have. 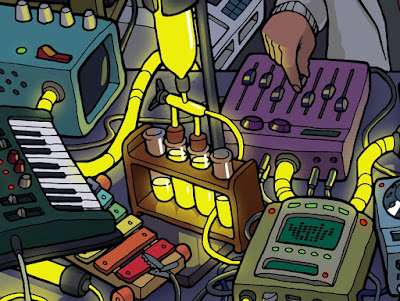 Scruffamudda is the one-man-loopy-loopy-band creation of my mate from piano school. Infections driving beats, myriad acoustic ephemera, clever content-laden lyrics, with just the right blend of interaction and gentle humanising self-effacement. Check him out. He has the same surname as a piano brand. No, it's not Steinway.

Each key lever has a key button which is a strength element at the fulcrum point of the key. See that section of wood attached to the top of each key? That's the key button. Here's a healthy, ample set of buttons designed to impress. Va-va-voom. It's not quite 'never mind the quality, feel the width'.

Once can't really complain about this generous design. It's nice.

But here (in the same brand of piano, but a much lower 'rung') the buttons have been downgraded to a mere veneer, as though this part's purpose has been forgotten. 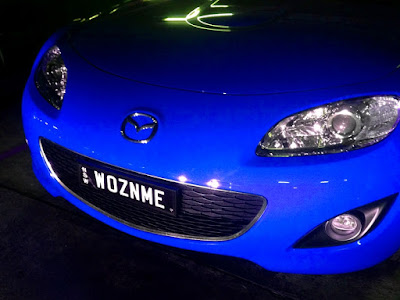 I spied this car and my first thought was, 'Wow, he really likes his mate Woz'.

It reminded me of discussing tuning pianos on the cruise ships with my partner in piano pampering. They're regularly tuned, in every port. But they do it tough because they're ship pianos. 'You see interesting names written in the pianos: Jordan, Turkey...' said Superhero Tech '...the ports where they've been'. Me: 'Oh, for a minute I thought they were the nicknames of piano tuners in Brisbane:. Jordan, Turkey.' It's plausible.

He likes his mate Woz. The penny dropped later... WASN'T ME. Oh, I get it. This gives that mid-life crisis-car's vanity plates a whole new resonance. WOZNME. Oops, I didn't mean to type that. I'm worried Woz's mate might google his plates then come looking for me.

Here beginneth the WASN'T ME department... 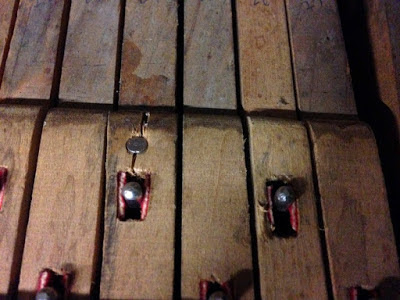 A while back I found a key button brutally nailed on (glued as well). 'Bush mechanic comes to town', I thought. It copped a bullet. 'Don't shoot me, I'm only the piano.' 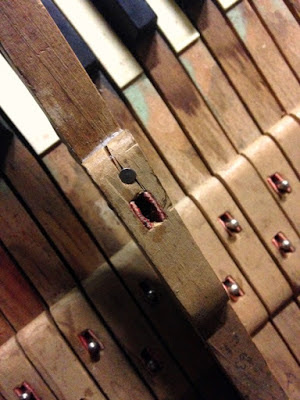 There were other keys failing at the fulcrum. This one was at least hanging on. There are two problems likely; the key button detaching, the keystick itself having a fracture, or both. I glued and clamped the broken keys I found. More could be done, but should it? 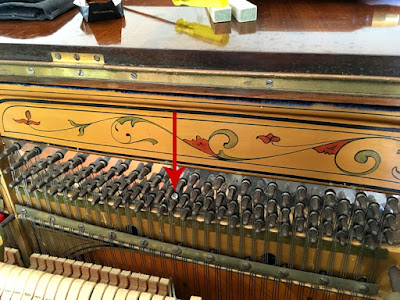 Screwed. We can only presume that someone has attempted to garner a little more torque from a too-loose tuning pin. Not the way to do it. 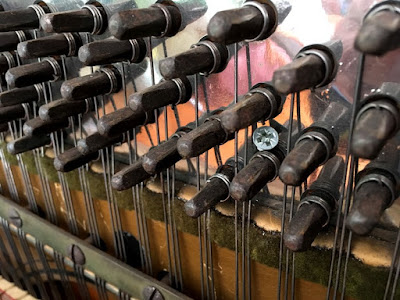 Life's bloggable mysteries. Dire pianos whose days are numbered (if there are any days left at all) tend to make the most educational stories. A failing pin block is a serious red flag in a piano. Don't assume that every out-of-tune piano can hold a tuning. Beware. 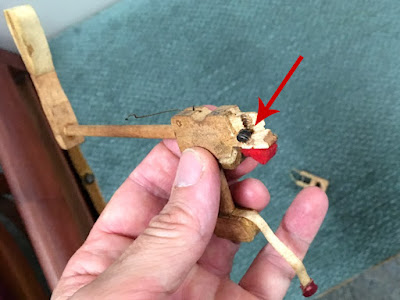 Desperate repairs can be understood or somewhat legitimised. The benefit of the doubt. We've all had to improvise on occasion without the ideal tools or materials. Still, this is dodgy. A screw is used in an attempt to couple the hammer flange (that little part visible behind my little finger) with the hammer butt. 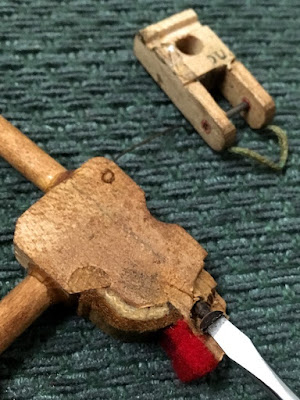 Extracting the screw from cracked, fragile old wood. A replacement hammer assembly for this note was an elegant (but complex) solution. Parts don't just universally fit (each other, or the piano) they must be adapted to fit. 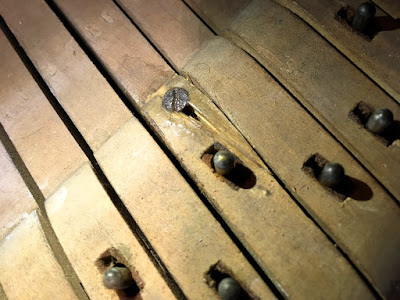 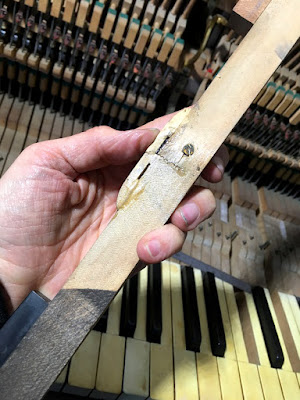 This piano's copped a lot of bullets. You can see the fracture in the keystick. 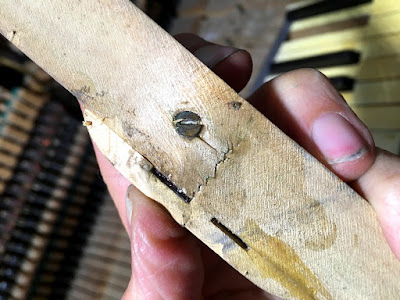 A closer view. Aliphatic resin (Titebond) would be a more appropriate choice of glue. Care must be taken not to get glue in the mortises nor their cloth (in this case kid leather) linings. Keysticks vary subtly in angle, so it is important to compare the broken key with its neighbour(s) to get the angle right. If you glue the key together in isolation how you 'think' it wants to go, it might not fit back in the piano, let alone operate. 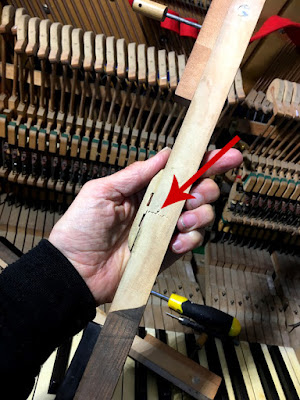 On the same piano this repair is more interesting and elegant. The technician appears to have used a centre pin as a nail (having pre-drilled a tiny hole). See the dot near the hairline fracture? Centre pins are teensy beautifully-made headless nails with sharp tips for accurate insertion into holes lined with cloth. They form the 'axles' of all the moving parts in a piano's action. To use centre pins in a repair capacity is an innovative approach and not at all unreasonable. This fix may have lasted a couple of decades but has finally failed. I detest the weird spongy feeling of playing a fractured old key.

There are more ageing clunkers out there than you can poke a broken keystick at. They are troubled at best, dead at worst. I'm passionate about educating folk about what crazy wooden machines pianos are. Precision machines.

Communicating with the client about an appropriate level of servicing is critical. What can and cannot be done? What should or should not be done? Can you bank on this piano for very much longer or not? It all has to be carefully managed. 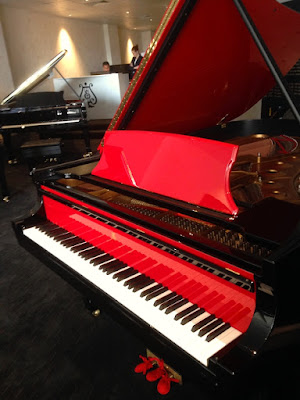 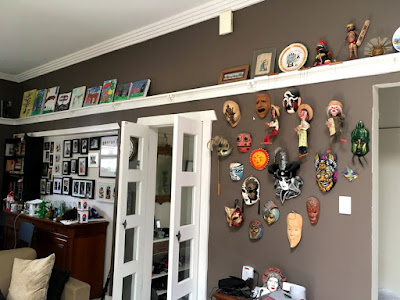 A different piano house. It's a who's who of voodoo. Oooh, there's that woman from Edvard Munch's The Scream... with Darth Kermit, Mr Miyagi, Moonface... and some marionettes of people that the client needs to stick pins into. Isn't that the guy who plays urhu near Central Station? 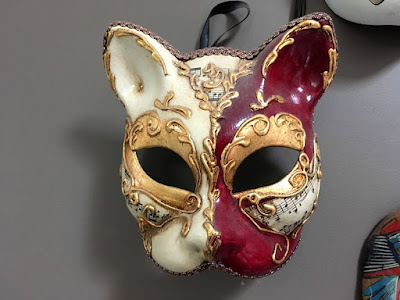 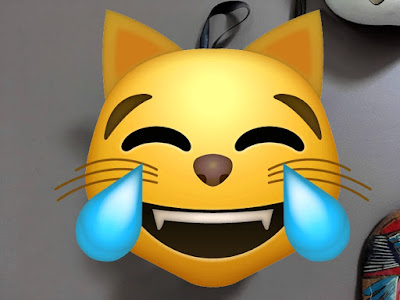 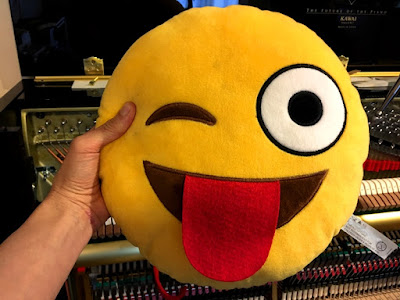 Emojis stalk me (in rumpus rooms full of instruments and plush toys). 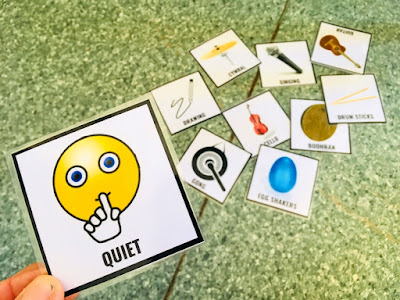 Educational materials at a school. They're all instruments except this one, probably the teacher's favourite flashcard. OK, yes, there is one other 'action' in those cards. 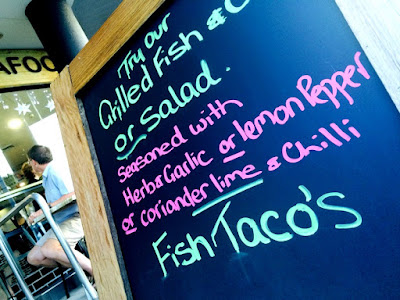 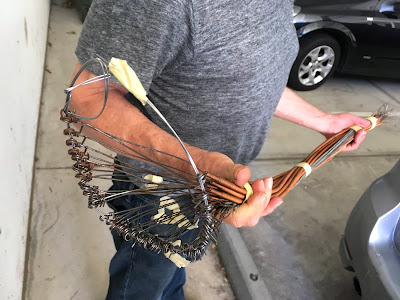 Bass string catch of the day. A set of used copper-wound piano strings is delivered to the string maker to be measured and copied. A new set will be produced. You'd be surprised (or not) at how heavy that bundle is. The strings (in strict order) are hooked onto another length of music wire by their 'eyes'. 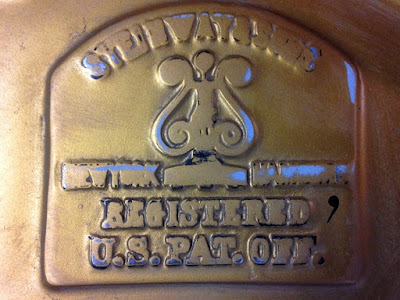 It's one of the Seven Grammatical Wonders of the World, this mysterious apostrophe painted on this piano frame. The frame had been sanded back ready for repainting. The apostrophe has long since been edited out in the spray booth. 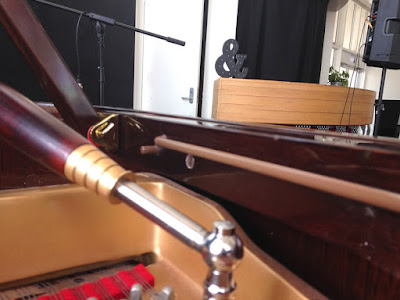 Punctuation stalks me at every turn. 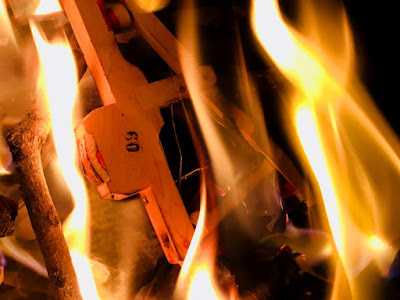 Bart Simpson: "Everything except capisce."

Pianos: Through the Looking Glass

Pianos: Things that go 'clunk' in the night